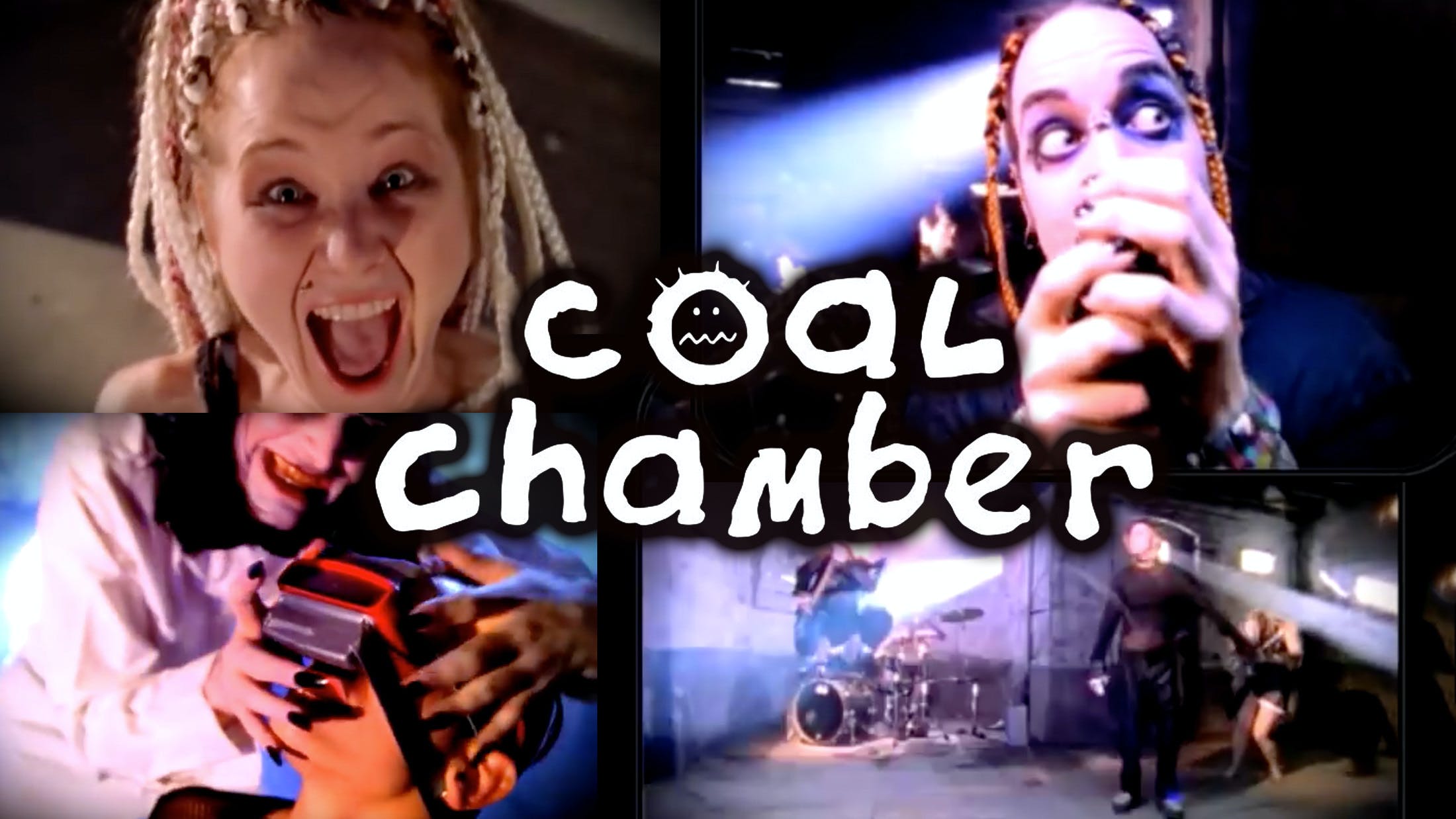 Supposedly the first band to whom the term 'nu-metal' was applied, Coal Chamber were a properly gran-terrifying band, an all-of-everything visual and aural overload of black mesh, barber-defying hair, dayglo highlights, chin-tats and yelling. (The most nu-metal-looking band in all of nu-metal: If you’re ever bored, just Google Image them and try to take in everything that’s going on – it’s loads and loads.)

Formed in LA in 1994, they had already played to huge crowds by the time their debut single came out in 1997, accompanied by the type of video that made parents shake their heads with sadness. And here is that very video.

0.13
Despite various sources on the internet claiming the ice cream man is Ozzy Osbourne, it isn’t. Look at his face. It’s a different face to Ozzy Osbourne, because he’s a different man. This dude looks like a mixture of him, Dani Filth and Noel Fielding, although is channeling a very Ozzy-like manic energy.

Part of the reason people think it’s Ozzy, apart from the vague resemblance, is due to a few connections between him and the band. They played the first-ever Ozzfest, in 1996. They were managed by Sharon Osbourne, Ozzy’s wife. Later, in 1999, they performed with Ozzy on a cover of Peter Gabriel’s Shock The Monkey.

0.22
That’s bass player and former dance teacher Rayna Foss playing with a ball on the veranda.

Born in Atlanta, she played on the first two Coal Chamber albums before leaving to start a family with her husband, Sevendust drummer Morgan Rose. This relationship caused tension within the band, as Coal Chamber and Sevendust were in something of a rivalry – even when they ended up touring together in 2013 after the rivalry was supposedly put to bed (and Foss and Rose were long divorced), they still badmouthed each other in interviews.

0.29
That red toy in the ice cream man’s hand is a View-Master, invented in 1939 and based around using stereoscopic images to create a 3D effect. It was initially intended as an alternative to postcards, and was briefly used in military training by the US Army, but ended up as a toy. There is now a virtual reality version. View-Masters can be seen in films like ET and Jurassic Park.

0.33
So, aspect ratios changing over time mean this is now a real bastard to watch – the video as a whole is in now-archaic 4:3, and now shifting to another 4:3 in-screen means, even watching this full-screen on a computer, the band footage fills about two thirds of the available space. Progress, eh? It’s really annoying!

0.35
Whut whuuuuuuut, it’s Dez Fafara, the extremely accessorised frontman of Coal Chamber and, later, DevilDriver. He formed DevilDriver after being unable (due to the “democratic” nature of the band) to take Coal Chamber in as heavy a direction as he wished. Dez’s father was a child actor in the 1950s, appearing on famous US sitcom Leave It To Beaver. Earlier this year, Dez re-did his famous chin tattoo, extending it down his neck.

1.04
Dez is happily knitting, using his feet, obvz, and good pausers can see the Coal Chamber tattoo on his arm. The name Coal Chamber, according to bassist Rayna Foss, came from two competing names. She said in an interview: “Right before I joined, they were called Coal. Dez liked the name and Meegs [wanted to change the name] to Chamber. They both liked the names so we put them together like peanut butter and jelly, and there you go.”

1.15
'Loco' means 'Crazy' in Spanish and Portuguese, of course – Fafara is of Portuguese descent. It’s used in other places too, though – there are towns named Loco in Georgia, Oklahoma and Switzerland, and a river in Puerto Rico sports the name.

1.29
Guitarist Miguel “Meegs” Rascon (who also has Coal Chamber tattooed on his arm), is just sitting, relaxing, gazing intensely at a rocking chair moving of its own accord. We’ve all been there, right? Meegs and Dez played together in She’s In Pain before forming Coal Chamber by placing an ad to recruit Rayna Foss and Mikey Cox. Meegs is now in Gemini Syndrome.

1.44
Look at this great visual representation of how band members can complement one another: Dez is doing a big-eyed thing, while Meegs is doing an eyes-rolled-back thing. Teamwork. Yeah!

2.00
If you’re looking at this band and thinking 'Gosh, this all seems very intense, I wonder if drugs were involved', the answer is yes. Several members had issues with substance addiction, which led to the breakup of the band. When Fafara was with DevilDriver, he said "People in Coal Chamber used to stay up partying for days on end and then make decisions that didn't make any sense at all. My thing has always been wine and weed, and then you've got the absolute opposite of that, and that's what I had to be around constantly on a daily basis for seven years. It was a bad situation and I had to get the fuck away."

In another interview, he said there was a strategic element to his leaving the band: “I realised that every night I was on stage with a microphone in my hand, I was putting money in [the drug-addicted members of the band’s] pockets, which led to putting drugs in their hands. Once we stopped going on stage as Coal Chamber their money ran out, their fame ran out and they eventually had to get clean.”

2.16
There’s drummer Mikey 'Bug' Cox, sitting too close to the television and staring straight into the static. The youngest member of Coal Chamber, Mikey and his brother Nathan both tried to join the band, with Mikey winning out. All was not lost for Nathan, though – he directed this video, along with dozens of others for bands including Steel Panther, Suicide Silence, Black Veil Brides, Marilyn Manson and Linkin Park. Mikey Cox is so dedicated to drumming that he named his son after a noise a drum makes – his kid is called Bash.

2.18
Old-fashioned static is so much more astmospheric and dramatic-looking than the modern digital version, isn’t it? That telly would just be blue now.

2.20
Hang on, according to Scientific American, sitting too close to the telly isn’t actually that bad. Sorry, Mikey 'Bug' Cox.

2.57
That rotten ice cream man – he’s tied them all to chairs and duct-taped the ViewMasters to their faces, and now he’s being all proddy and pokey. What a jerk!

3.06
Duct tape has quite a complicated history. There were various fabric tapes around at the beginning of the 20th century, but its use in wartime US efforts really popularised it after (following the suggestion in a letter to President Roosevelt from the concerned mother of two soldiers) it was used in ammunition packaging, so it could be opened quickly.

3.14
Weirdly, on YouTube, this song is credited to writers Phil Thornalley, Anne Preven and Scott Cutler rather than Coal Chamber, who actually wrote it. Thornalley, Preven and Cutler are best known for writing Torn, made famous by Natalie Imbruglia. What’s going on, YouTube? Other than each having four letters in their names, the second of which is an O, Torn and Loco are about as different musically as songs get.

3.41
The ice cream van says 'COAL CHAMBER' on the back of it – the whole thing raises questions really. Didn’t the ice cream man just attack the members of Coal Chamber? Why would he do that if he is a representative of them? No idea. Fun video though, well done everybody.

“It was about smashing down walls”: How adidas invaded nu-metal

Arriving like a subculture from outer space, nu-metal shook up not just the sound, but also the style of heavy music. We sat down with Korn’s Jonathan Davis to look back on how sportswear infiltrated our traditionally denim-and-leather clad scene…

Why does this man need FBI protection?