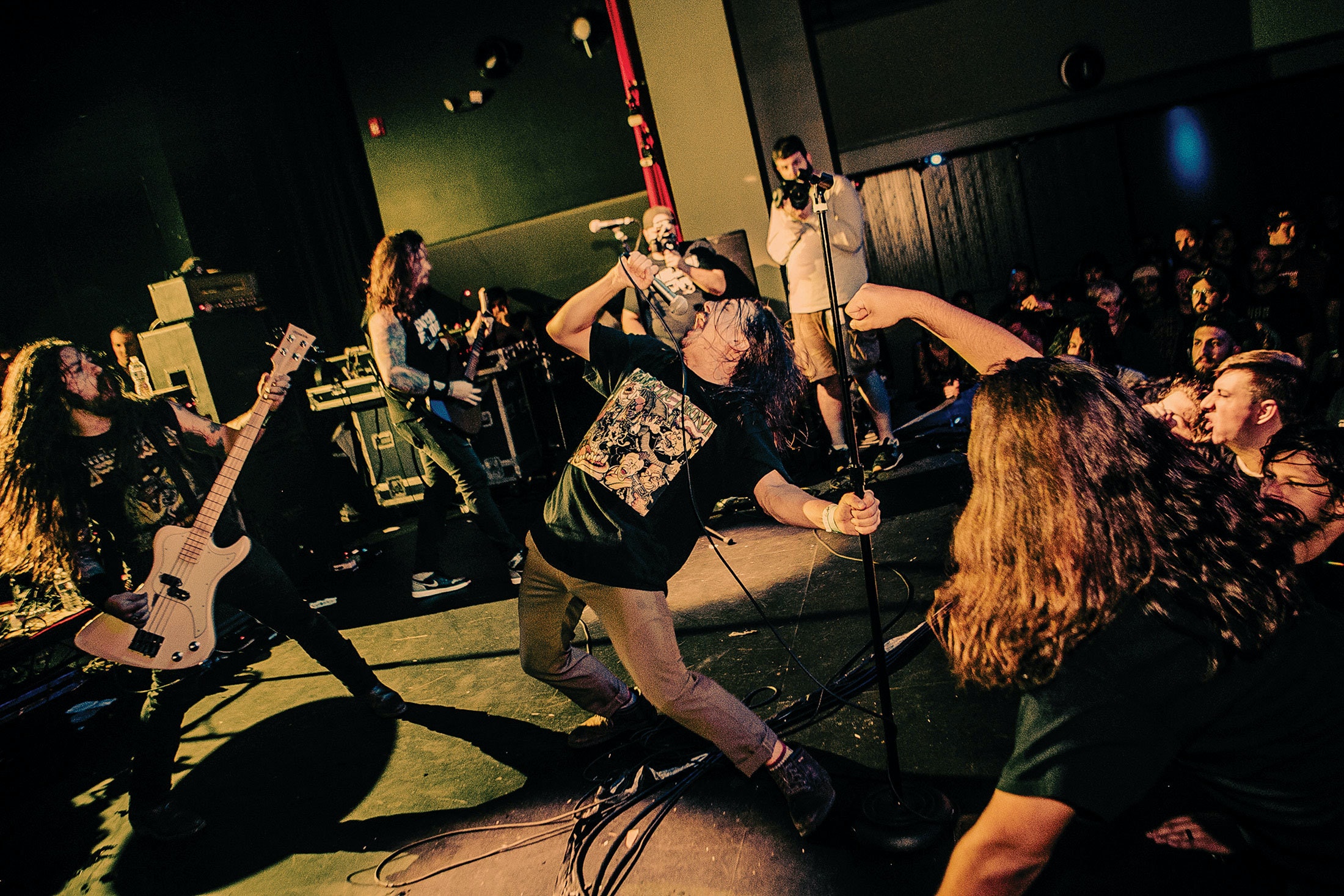 “I just wanted to thank you guys for the support, we appreciate it.” That was the last time Kerrang! saw Riley Gale, as he poked his head into our production hut at Download Festival 2019 to question our sanity for naming Power Trip the greatest American metal band of the past decade. A humble gesture from a man who, just hours earlier, was commanding tens of thousands of metalheads into a frenzied mass of flesh, as he stood at the end of the vanity ramp, mic in hand, looking every bit like a superstar in waiting.

That image, that visage of potent aggression and self-belief, is how thousands of fans across the planet will remember Riley, who passed away this morning at just 34 years old.

“Riley was a friend, a brother, a son. Riley was both a larger than life rock star and a humble and giving friend. He touched so many lives through his lyrics and through his huge heart. He treated everyone he met as a friend and he always took care of his friends,” reads a statement posted by the band.

“You, the fans, meant so much to him, please know how special you are.”

And since their formation in 2008, Power Trip have been winning fans the old fashioned way. No gimmicks, no social media stunts, just touring and playing, solidifying their place in the underground before bursting over the top in 2017 with Nightmare Logic. Riley’s vocal performance was integral to all of that. Thrash hasn’t felt like a big deal for over a decade, but his barbarous tone, hooky lyrics and vicious gnashing of teeth set the Texan crossover merchants apart from the pack. Rather than rehashing old stereotypes, they took the influence of the Big Four, added some love for Obituary and Cannibal Corpse, and were taking the genre into new places – bridging the gap between hardcore and metal in the process.

But despite all the attention he was getting, it never went to his head, recognising the cyclical nature of music and temporal nature of art, and the unnecessary competitive pressure placed on bands.

“When I talk to people from labels or magazines, it comes down to us, Turnstile or Code Orange, and they always say, ‘One of you is gonna save the music industry!’ That idealism really gets under my skin, because I don’t see why it ever has to be one band,” Riley told Kerrang!.

“Those kinds of hyperbolic saviour adjectives become hurtful to some bands. It puts a lot of pressure on them to be something that they never intended to be. And it sucks, because it ultimately makes criticism easier if you don’t live up to that hype. I don’t want fans to be influenced into thinking that way. I don’t want some band to feel like they can’t enter this place, because the industry is like, ‘Don’t start a thrash band because Power Trip have that market cornered.’ If all our bands ended tomorrow, music would be fine. Other great bands would take our place. I don’t see some rapture of music if we don’t have the second coming of Metal Christ, y’know?”

And while he might not be the Messiah, there was always something soul-affirming about watching Riley at work. An early start on the main stage at Bloodstock is an unenviable position to be in, coming against a hungover rabble of metalheads who should probably be in bed, but within a matter of moments the black T-shirted horde were putty in Power Trip’s hands. The power and confidence Riley possessed was infectious, hurling himself around the stage in Slayer sweatpants before later throwing himself into the crowd, they put on one of the best sets of the weekend – no small feat, considering Gojira headlined that evening.

But it wasn’t just his energy that captivated the hearts and ears of thousands around the world, it was his authenticity. In this game, we see a lot of bands try to talk the talk and walk the walk, but Riley was as real as they came. A lifer. Someone who genuinely loved metal – and the feeling was mutual.

“We were able to chat about comics, games, and food – often – and you fronted a band that had the world excited like no other. You will be greatly missed. Rest In Peace Riley,” tweeted Trivium frontman Matt Heafy, alongside a photo of the bands sharing a meal on a recent tour of the UK.

“Rest In Peace Riley. You made a huge dent in heavy music history that will last forever,” added Code Orange.

“He used his voice, status, and actions to strike against oppression in a music community too used to complacency and toxic masculinity. We could all take a lesson from how he held himself and do better, no matter how we are doing now. Thank you for your care, your work wont be forgotten,” tweeted Vile Creature.

The last vocal performance Riley gave was with Body Count on their latest album Carnivore. Frontman Ice-T tweeted his devastation at the news of Riley’s death, along with a new video of Point The Finger featuring the Power Trip vocalist, filmed from his home while in lockdown. Even sat on a stool in his garage, he still manages to look like one of the baddest dudes on the planet.

So listen to Power Trip today. While we may never get the follow-up to the sensational Nightmare Logic or see Riley tear up stages like only he could, we still have the music and the memories of true firebrand.

Swing at the world, Riley.