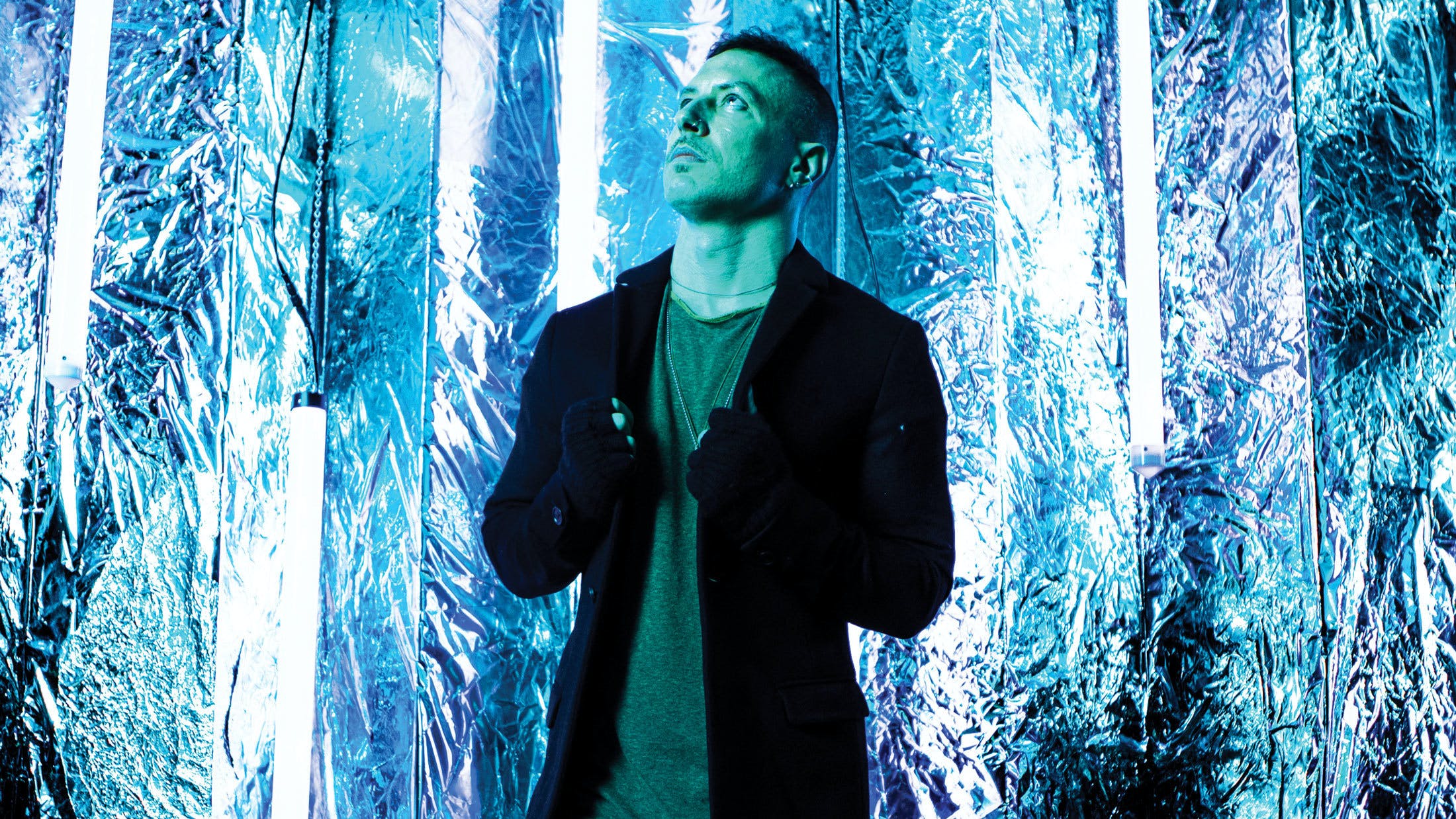 Greg Puciato is becoming a force of nature. Since mathcore revolutionaries The Dillinger Escape Plan disbanded in 2017, the Baltimore-born vocalist has not only completed two albums with the sensual and brooding electro-trio The Black Queen, but also published a collection of poetry and photography entitled Separate The Dawn. Now, he’s preparing to release his first-ever solo album, Child Soldier: Creator Of God.

“You know, it’s not up to you to constantly give and give of yourself to other people, to your own detriment,” says Greg. “And that, I think, is something that a lot of people feel guilt over. Putting themselves in a place where you can say, ‘I’ve tried to help you, but you’re not trying to help yourself – and I’ve got to let this go, for my own health.’ That’s exactly what Fire For Water is about.”

The prolonged period of hyperfocus that birthed Child Soldier also resulted in several other high-profile activities, including his own label, Federal Prisoner – which will release the album – and a forthcoming second album by his group with Max Cavalera and Troy Sanders, Killer Be Killed. And if that weren’t enough, Greg was invited to sing alongside Jerry Cantrell of Alice In Chains at Pico Union Project in Los Angeles in December. Here, he gives us the lowdown on all this, and more…

Where has Child Soldier: Creator Of God sprung from?
“Last March or so I sat down to write what I thought was going to be the next Black Queen record. And then, when I was writing, I realised it wasn’t The Black Queen. I kind of went, ‘Well, what is this?’ And I just kept going. And that’s been the basis for the start of every other thing that I’ve done, too – very need-based. It wouldn’t have fit in Dillinger Escape Plan, it doesn’t fit in The Black Queen, it doesn’t fit in Killer Be Killed. This was sort of stunning for me, the way the book was. I didn’t sit down and plan to write a book. I didn’t sit down and say to myself, ‘Okay, strategically, now it’s time for me to write a solo record.’ I just wrote a bunch of things that didn’t have any other home.”

Fifteen tracks and 70 minutes is an incredible quantity of music…
“It was a big outpouring. When I tried to whittle some of it down, I couldn’t. This record just is what it is. Contractually, an album only has to be 10 songs – that’s why bands only do 10 songs now. Nobody wants to put more on their record because they don’t want to give labels things for free. But I don’t care. I want the record to be complete.”

Did you write everything yourself and record every instrument?
“Everything except for the drums. Some of it is electronic and doesn’t have drums – in which case I’ve programmed them or had Nick Rowe help me. But I’ve known Chris Hornbrook since we were 23. He knows how to hit a drum. For a lot of the songs on this record, I knew he was the guy. And then Ben Koller – who drums in Killer Be Killed, Converge and All Pigs Must Die – is on a track. Chris Pennie, the original Dillinger drummer, is on a track, too. He’s also done some orchestration and additional instrumentation on a few tracks as well.”

Fire For Water is a ferocious first single. What’s the story behind it?
“That song was kind of a barrage. I didn’t think anything like that was going to be coming out of me. Once I made the decision to do the solo record, it felt really liberating. Maybe because it was the time of year when we’d be working on a Dillinger record, if we’d been working on a Dillinger record – though, obviously, we weren’t – that Dillinger sentiment started to grow in me. I got rid of a lot of toxic energy with the book, and then I started to feel really aggressive again, but in a positive way – in a way that felt very empowering. Not enough, maybe, to write 10 or 11 of those kinds of songs, but I definitely had enough in me to sit down and inject the record with some of that. Fire For Water is pretty ferocious – as ferocious as anything I think I’ve done vocally, and it just came out in a burst.”

How did you reconnect with Dillinger’s first drummer, Chris Pennie?
“Chris and I didn’t talk for, like, 10 years. After the band was over, we reconnected. I said to him, ‘Hey, man, I don’t know how much you’re playing drums these days, but I’ve got a track I think you would fucking kill,’ and then sent it his way. Not even a day later he sent me back demo drums. The lyrics really came out fast, too. I know you probably can’t hear everything I’m saying, but it’s mostly about getting rid of toxic people or toxic energy, or drawing a hard line and saying, ‘Hey, I’m not dealing with this energy anymore. It’s not my job to help everyone in my life, if, after a certain point, they’re not helping themselves.’”

A lot of Dillinger lyrics seemed to be about the difficulty of intimacy, whereas Black Queen celebrates the hope of connection. Where does Child Soldier fall between the two?
“That’s interesting. This record is post-Black Queen, but it’s hard to tell. When I read these lyrics they do feel a little bit like Dillinger, but they also feel like Black Queen, too. Those two bands are almost like two different aspects of my personality. I think this record has merged them in a way that they don’t feel like either band, but they do have hints of both. There are songs that sound like nothing people have ever heard me do. And that’s saying a lot, because Dillinger did a lot of different stuff. But the whole record is sort of celebrating integration, which is something I had a really hard time with in the past, and celebrating owning every aspect of your personality. There’s a lot of newness on this record. It’s not Black Queen meets Dillinger.”

Are you nervous about putting this out under your own name?
“You know what? I was. And that’s why I was hiding behind a moniker for a while. I was gonna call it all Child Soldier. Really, the turning point for me was becoming good friends with Jerry Cantrell. Me and Jerry Cantrell are really close now, from those December shows. I said, ‘Was it weird for you to put out those solo albums of yours, because they’d just say your name on them?’ And he was like, ‘Kind of, well, yeah – but you’ve got to own your shit.’ And, to me, this whole album is about the integration of everything into one, and owning every part yourself. So to hide under a moniker suddenly felt weak to me. If I’m owning my own path as I get older, like, ‘Yeah, that is what it is.’ It’s a solo record. It’s my fucking name. Why wouldn’t I want to say proudly, like, ‘Hey, this is mine’?”

What has making the album taught you as an artist?
“If every band I’m in ceases to exist, I now know that I can make a record from front to back with just a producer. If I can’t play the drums, I’ll hire a drummer. If I need a violinist, I can get a violinist. To me, that was very empowering: to be able to do that and have it sound just as good to me as anything else I’ve done. The sky’s the limit creatively now. I don’t have to sit around and hold on to anything. It feels like now I’ll have a home for anything I come up with.”

The album will come out via Federal Prisoner, the label you’ve set up with visual artist Jesse Draxler. What are your wider plans for it?
“Jesse is one of my best friends. We feel the same, as people, when we’re talking to one another. To me, that becomes very important. When you find chemistry with another human on this earth, every time, it kind of reinvigorates you, and then you’re like, ‘Shit, what can we do with this?’ He’s had just as big a hand in it behind the scenes. A lot of things haven’t been revealed to the public. There’s gonna be a few releases coming out within the next 12 months that I obviously can’t say things about yet. But three or four, probably.”

What stage of development is a new Black Queen album at?
“Oh, really early – I can’t imagine that record coming out until 2021. And then we’ve been working on the second Killer Be Killed record for years now, too. I’m guessing that’ll be out before the Black Queen record. Federal Prisoner has all the stuff happening besides my release. But that’s good. When the universe gives you an opening, and when it gives you work to do, you’ve got to do that work. This solo record was a massive outpouring that took a lot out of me. I kind of need a minute to let the Black Queen stuff start coming from a place of want instead of feeling like, ‘Oh my God, I have to write a Black Queen record right now.’ Steve can work on his end, and start compiling stuff. When I feel naturally recharged, I’ll hop back in.”

Back in April 2018, Max said Killer Be Killed were rehearsing and writing new material. What have you done since then?
“We’ve done a lot, man (laughs). That’s its own thing, and I don’t want to muddy the waters, because we’ve all made a pact that none of us are going to be the person who fucks up and says more than we should say. I will tell you this: it’s not done. And until a record is done, it’s like counting the cheque before it’s cashed. All of us have been burned by this before. We are significantly further along than we were back then. But we’ve definitely said we’re not going to make any claims as to when it’ll come out or when it’s gonna be done.”

What are your ultimate hopes for the Child Soldier record?
“Every time I’ve put something out in the past, I’ve never believed there was going to be another thing. I’m always like, ‘That’s it – I can’t even imagine doing another record. I can’t imagine coming up with another song. I don’t think I have anything else.’ So I think what I finally have done is just trust the process. There is no endgame to me. I don’t have some long plan. I’m just excited for the thing that’s immediately in front of me. And it’s been going that way since I picked up a guitar at nine years old or so. I just want to keep following that, see where it goes and keep doing things for reasons of passion and excitement. Hopefully those things keep coming.”

Child Soldier: Creator Of God will be released this year via Federal Prisoner.