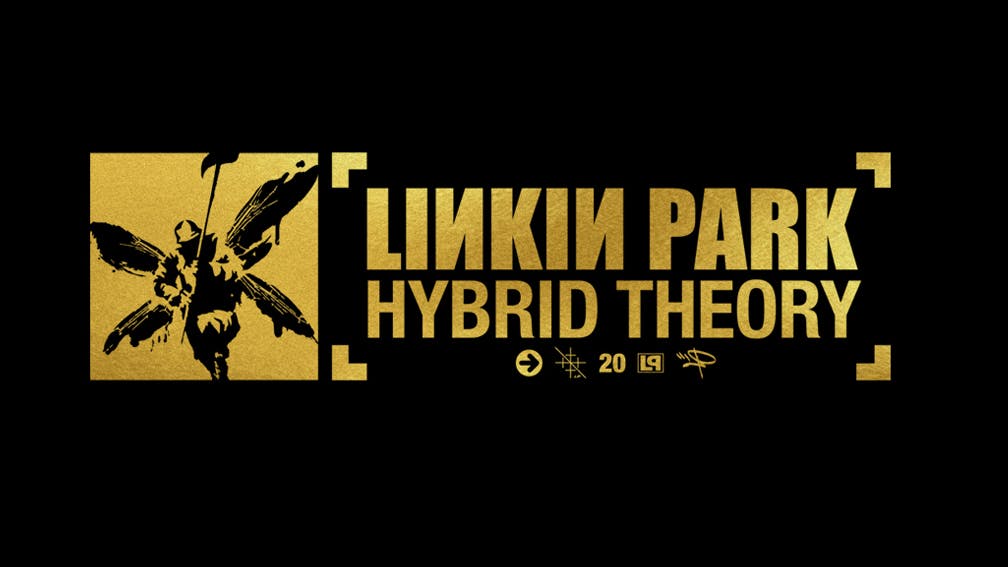 It’s not hyperbolic to say that Hybrid Theory is one of the most important rock albums of all time. It was that perfect gateway drug for millions of teens around the globe to discover alternative music through its monumental hooks, bouncing beats and the unstoppable, never-bettered vocal interplay between Chester Bennington and Mike Shinoda. Merging the worlds of hip-hop and electronica (previously seen as enemies) with rock and metal, this ‘hybrid’ felt fresh, energising and the perfect sound to usher in a new millennium. Building on the foundations of their peers in Deftones and Korn, Linkin Park’s debut had the accessibility turned up to 11, with shimmering production and lyrics so infectious you’d need gloves to handle them.

And, to mark two whole decades since its release, Linkin Park have opened their vault to bring us a chonking great six-record box set that follows the embryonic stages of the band – originally known as Xero – to the brain-mangling 2002 remix album Reanimation.

Listening to Hybrid Theory today is just as exhilarating as it was in 2000. From the opening pulses of Papercut, few records strike at the heart of what it means to be cutting edge, the sound of a band determined to shake things up, pulling from influences as diverse as Depeche Mode and DJ Shadow. And while it’s always great to hear the pained wails of Crawling, the simply timeless In The End, and nu-metal aggro of One Step Closer, there’s still so much below the surface. The criminally underrated With You (with Chester’s cathartic, guttural ‘With youuuuuuuuuuuuu’), the joyous ‘Hoo-hah!’ in Forgotten, the electro-wizardry of Cure For The Itch… this is more than an album of four mega-singles.

Away from the record proper, we find ourselves in the midst of its kind-of sister album, Reanimation. Released two years after Hybrid Theory, the band invited some of their DJ and rapper mates to reinvent the record, with varying degrees of success. “They were all people that we really looked up to and wanted to collaborate with,” Joe Hahn told Kerrang! in this week’s Cover Story. Sadly, it isn’t a 100 per cent hit rate: some remixes miss the magic of Linkin Park completely, hacking their way through a capella vocals and riffs until they’re a useless mess. That said, the dubby bass of Frgt/10 with Charli 2na and Pharoahe Monch’s showing on H! Vltg3 elevate the record, while Deftones’ Steph Carpenter’s interpretation of By Myself (titled By_Myslf, naturally) adds even more heaviness and a refreshing, almost-Infected Mushroom beat. None of the songs, however, are an improvement on the originals.

But how did we get to the originals? Well, this is where the boxset comes into its own for Linkin Park completists. More than just curios and random unfinished tracks, this is Hybrid Theory’s journey from primordial ooze to the sound of the future (well, 2000).

The six-track 1999 Hybrid Theory EP lacks the finesse, catchiness and oomph that made the debut album so essential. It also feels much darker as a piece of work, but Mike Shinoda’s antagonistic Step Up notches up the bouncability with his bombastic ‘Who can rock a rhyme like this?’ vocal hook. Follow-up track And One offers a glimpse into just how good Chester and Mike would be together, and channels the inner angst that was so integral to Hybrid Theory connecting with a wider audience.

The B-Sides And Rarities record doesn’t just showcase the band’s weird and wonderful side, but also highlights just how vital Linkin Park view the UK as in their initial success, picking songs from their BBC Radio 1 session amongst live tracks from their 2001 London show at Docklands Arena. Playing to 12,000 people off the back of your debut album is unheard of now for metal bands, but such was Hybrid Theory’s impact. Elsewhere, The X-Ecutioners’ It’s Goin’ Down brings back memories of Kerrang! TV binges, and the sombre, piano-led My December is a stark reminder of just how good Chester’s voice was, even early on. There’s always a twinge of sadness when you hear him sing, but this B-Side from the One Step Closer single hits particularly hard, as he delicately claims ‘I’d give it all away to have somewhere to go to / Give it all away to have someone to come home to.’

The LPU Rarities compilation brings together some of the deeper cuts from the band’s LP Underground EP series that so far contains 15 instalments. Featuring a few more tracks from their Docklands show, we also have the skeletons of songs that would grow into gargantuan hits – from the funky instrumental of Stick And Move that would eventually become Runaway to A Place For My Head’s precursor Esaul, with that unmistakable intro but differing lyrics. In fact, what the LPU record showcases more than anything is how prolific Mike Shinoda is as a songwriter; there must be thousands of verses on his cutting room floor, all of which still flow perfectly, but didn’t quite hit the mark. When this boxset is on Spotify, it would be awesome for someone to arrange every song in chronological order, so we can listen to the development of Hybrid Theory in real time.

The Forgotten Demos record is the real treasure trove though, including a number of Xero demos featuring original vocalist Mark Wakefield instead of Chester. It’s yet another chance to witness the sonic evolution and the sudden lightning bolt of creativity that electrified the band to turn tracks like Rhinestone into Forgotten or SuperXero into By Myself. She Couldn’t feels like it could slot in on Hybrid Theory nicely though; while it’s more meandering and chilled than we might have expected or wanted at the time, the album’s DNA is clearly there. Dialate on the other hand is much more rooted in hip-hop than where the band would eventually take things, and the Crawling demo lacks that real harsh-throated vocal from Chester, sounding oddly uplifting as a result. It also includes original line ‘Fear is powerful’, which would be swapped for the much more poignant ‘Fear is how I fall’ (a result of producer Don Gilmore mishearing the lyric).

And then, of course, there’s the lost track Pictureboard, which hasn’t been heard for over 20 years. Speaking to K! about the track, guitarist Brad Delson said it was actually the first song he heard Chester sing on, and “it just blew my mind. He sounds like two different people on the same song… It’s like fireworks.” And we’d be inclined to agree.

At six records and a whopping 80 tracks, it’s vast undertaking for one listening session. And unlike the lavish box design suggests, this isn’t all gold, but that’s not the point. It’s as much about the journey as the destination, and this is a 20 year celebration and exploration of how Linkin Park worked their way from lo-fi 1998 demos to flame-haired world-conquerers just two years later. In fact, it would have been great to include a visual element – perhaps the band’s 2014 Download set where the played the album in full? Arguably the greatest 38 minutes the festival has ever seen. And 12 songs that we’ll never get tired of listening to, ever.

For Fans Of: Bring Me The Horizon, Deftones, Korn