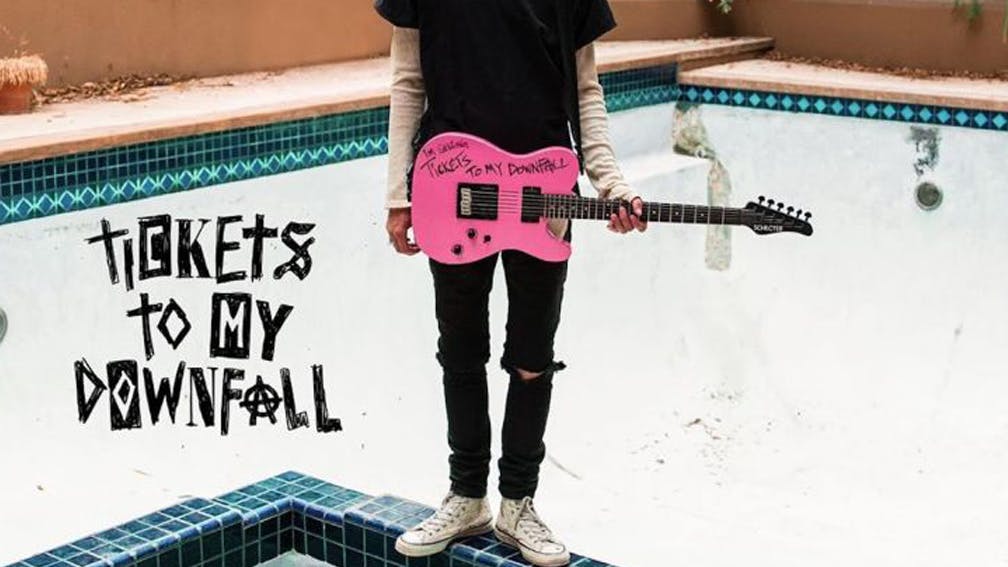 Machine Gun Kelly says that Tickets To My Downfall couldn’t have been his debut album. He used a metaphor of a crashing Goodyear blimp on fire to illustrate to Kerrang! in last week’s Cover Story that, once you get to a certain height, nobody cares until it all goes wrong. Then you’ll have their attention again. “People are aware of this height that I’m at, and they don’t want to see it rise anymore,” he explained. “They want to see it crash.”

It’s a curious metaphor. A decent one, but curious. Over the past almost decade, Machine Gun Kelly – Colson Baker to the passport office, Kells to his mates – has become one of America’s hottest new-ish alt rappers. Such was his ascent, he and rap megastar Eminem even traded diss tracks in 2018 (Rap Devil from Kells, Killshot from Eminem). Last year he stole the show playing a charmingly dopey Tommy Lee in Mötley Crüe biopic The Dirt, while more recently he appeared opposite Jamie Foxx as, basically, a fireball, in Netflix superhero flick Project Power. He is the boyfriend of Megan Fox. Yer man is in no danger of crashing and burning anytime soon (unless he’s playing a fireball, anyway). And with Tickets To My Downfall, attention will be grabbed, but not because he’s Hindenberg'd himself. Rather, this is simply adding more degrees of climb to his already impressive trajectory, less "Oh, the humanity", more, "Woah, the profanity".

Teaming up with blink-182 drummer Travis Barker, this is an album that swells with a heart of pure Warped Tour pop-punk nostalgia. The usual rapping is firmly on the back burner, save for a few faster moments, and My Ex’s Best Friend featuring blackbear, in favour of this absolutely spot on rush of fizzy melody, sticky choruses and caffeine-bomb energy. On the speedy World War III, anthemic Kiss Kiss and excitable opening Title Track, you feel like if you fell over you’d land at a barbecue with all your mates and loads of beer. There’s probably someone skateboarding nearby. You might even get a kiss.

But pay attention to the lyrics, and the strain and stress that’s fuelled the blimp metaphor comes into a bit more focus. ‘I used a razor to take off the edge, jump off the ledge they said / Take the lazer, aim at my head and paint the walls red, I said,’ goes the chorus to the opener. In the next verse, he talks with a tinge of regret about ketamine and cocaine, adding, ‘If I were a painter I’d be a depressionist’. It’s an open-diary honesty that fills the whole album, confessional and unflinching, at once a sting in the tail of the pop-punk good times, but all the more original for it. Perhaps, then, the person wondering when this is all coming crashing down is Kells himself.

It’s worth repeating, then, loud enough that he hears, that he has nothing to worry about. Not only is Tickets To My Downfall a slick sideways hop from what you might be expecting from Machine Gun Kelly, it’s done excellently. It celebrates everything great about pop-punk without feeling cookie-cutter or third division. It also finds its energy from the knots Kells works through in the lyrics. Most of all, when it’s all fired off as one thing, it doesn’t crash and burn – it bounces off the walls like a rubber ball fired from a cannon. And it feels great when you get hit by it.

Tickets To My Downfall is out now via Bad Boy / Interscope.