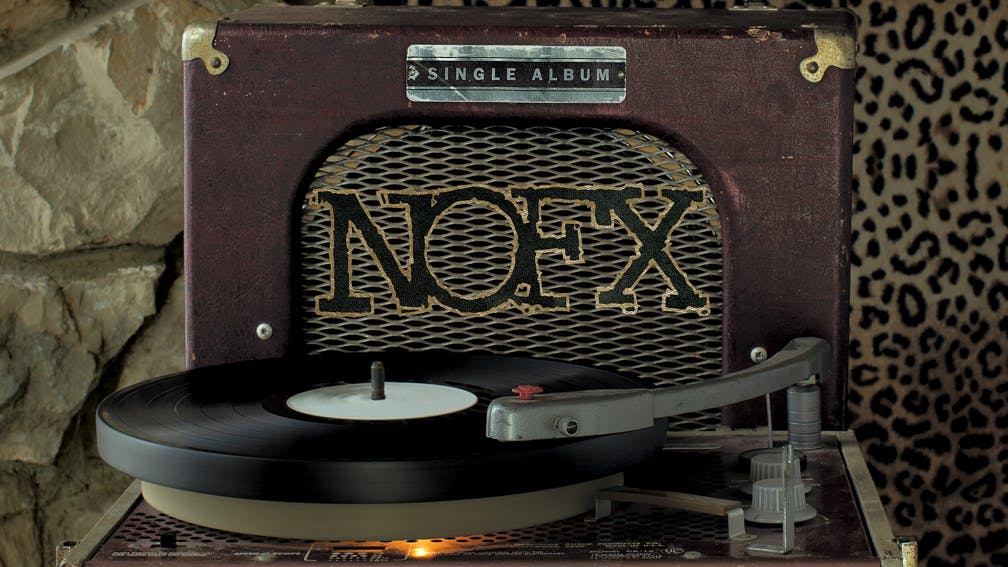 Opening with a super-serious doomsday lament that’s just shy of six minutes and, briefly, apparently borrowing the intro riff from Bryan Adams’ Summer of ’69, is not something anyone could have reasonably expected from the first NOFX record in five years. Then again, this particular version of The Matrix that we all appear to be stuck in seems to have more than a few glitches programmed into its ones and zeros.

You’ll encounter a number of similar such eyebrow-raising moments on the SoCal punks’ umpteenth full-length (well, their 14th, but who’s really counting?). On Single Album – so-called because it was supposed to be a double until the events of 2020 made a mockery of those plans – one song fades out, another opens with lap steel guitar, there’s a blast of saxophone, a truly terrible attempt at a Brummie accent, and the whole thing ends on a piano ballad. Incongruously, it’s all curiously engaging, with Fat Mike and the gang making for typically riveting company.

If you think you’ve heard it all before from the veteran punks, this record begs to differ. It’s up there with their edgiest and starkest, rightly reveling in its zero-fucks regard for what anyone thinks as the band march ever closer towards 40 years in the game. How many other punk rock acts could get away with a deconstructed cover of their most popular song as a means of retiring it from service over 25 years later? Better yet, Linewleum (see what they did there?) is genuinely laugh-out-loud hilarious with all sorts of cleverly meta tricks up its sleeve. Not least in the adorable videos they’ve made for it, particularly the version where Avenged Sevenfold make a self-deprecating cameo.

Around every lyrical corner there’s sex and drugs and death on Single Album, with brilliantly cutting couplets decapitating zeitgeist hot topics like gun control and gender politics, taking the temperature of a world gone mad yet never missing a chance to turn the crosshairs inward. These songs find Fat Mike in naturally somber mood, fresh from his recent stint in rehab, making for a record filled with wry, bittersweet and righteous observations both personal and universal. On Birmingham, he recounts his drug and alcohol-induced rock bottom, when a bleeding ulcer led to the hospitalisation that prompted him to finally seek help. Later on Doors And Fours he looks back on the scores of friends’ lives lost and damaged by addiction in the 1980s punk scene, bookending his own brush with mortality with no small sense of appreciation for his luck in surviving. If all of the above sounds worryingly worthy or worse still, not very punk, fret not, the whole thing is still rooted in the same core sound and delivered with the kind of sarcasm you’ve come to know and love or hate by now.

If your mind was made up about NOFX years ago, Single Album is unlikely to change it, but even if this isn’t essential for everyone, it is for the band’s troubled leader. ‘When I’m with NOFX or having fun and sex I seem to function’, he sings on the aforementioned Birmingham, ‘When I’m alone it’s just self-destruction’. Considering where he was only recently, the return of a reflective, newly sober Fat Mike is a welcome one indeed, especially when his band can still produce the goods like this.

For Fans Of: No Use For A Name, Lagwagon, Cokie The Clown

Single Album is released on February 26 via Fat Wreck Chords.

READ THIS: "Our country is just full of uneducated racist idiots, and that’s crazy": Fat Mike on the state of America

NOFX's Fat Mike: "I fly my freak flag sexually and musically, and punk allows me to do that"

We investigate how NOFX's hard-partying leader Fat Mike got himself sober and why he believes punk rock will never die.

"Our country is just full of uneducated racist idiots, and that’s crazy": Fat Mike on the state of America