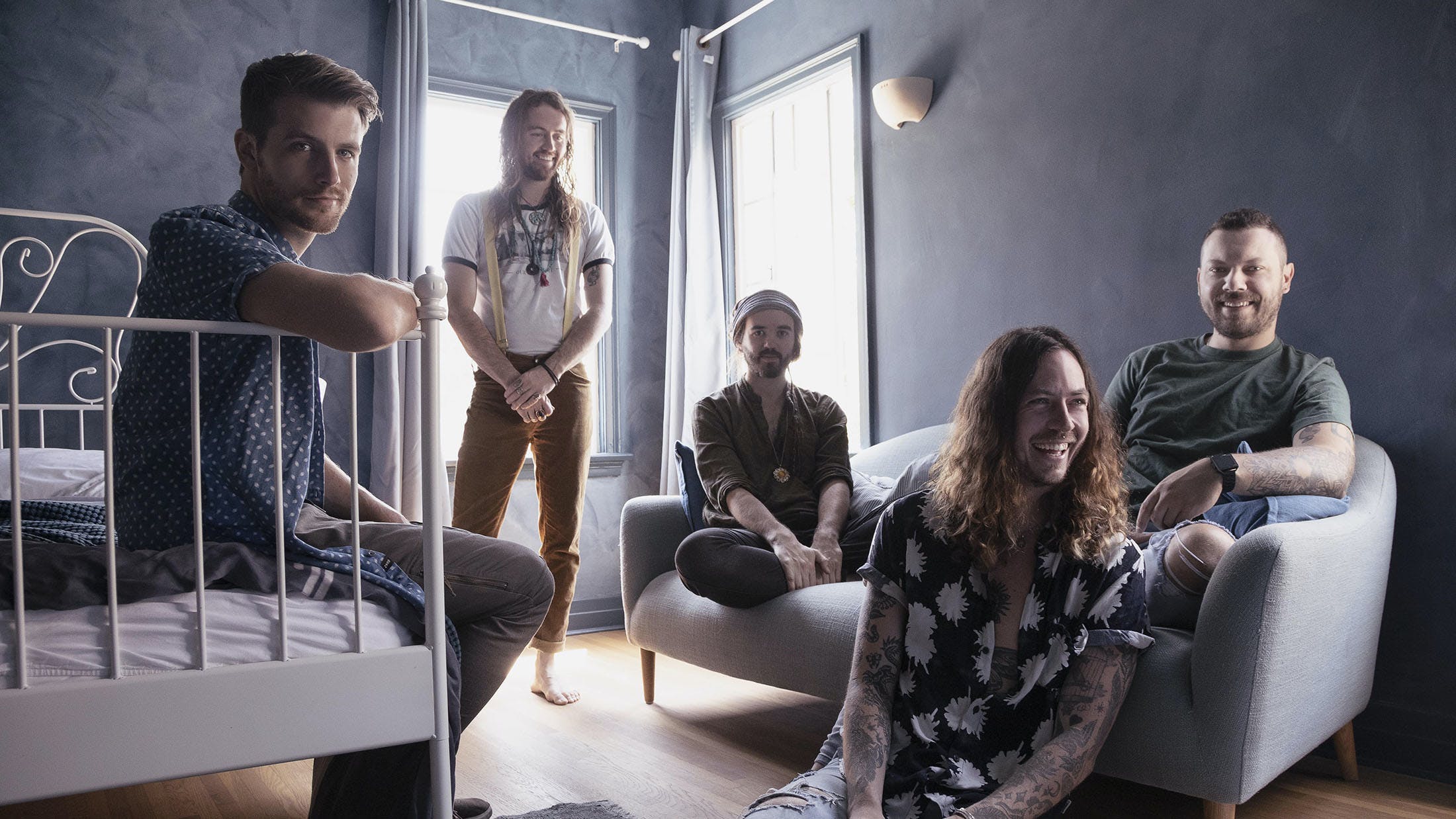 On new album -Anon., Aussie rockers Hands Like Houses have taken a bold step into the unknown. Straying from their experimental post-hardcore roots and embracing a mainstream-friendly rock sound, the Canberra quintet’s fourth full-length is their play for the big leagues. As vocalist Trenton Woodley explains, this outward-looking, R&B-influenced record is the sound of a band refusing to be constrained by expectation….

Why did you decide to call the record -Anon.?

Trenton Woodley (vocals): “It came to me when I was on the plane headed to the studio. I was dealing with a lot of stress and pressure at the time – the guys had written a bunch of new songs at the last minute, so I didn’t feel all that prepared. I’d been toying with the idea of referencing poetry in our music, and I thought about how poets writing anonymously leads to their art living on for decades; because we aren’t aware of who the poet is, all we know is that the words speak to us enough that we share it with others. We wanted to have that quality to our music, and that was the catalyst for me to write songs for this album that weren’t about my own experiences. Anonymity – the feeling that this was still us, but not our stories – felt right, and that became my motivation for writing the rest of the album. It was a feeling of freedom.”

Where did that desire to tell stories that are less personal stem from?

“We’ve already written three albums, and I feel like my story is told. We live in a post-depression world where we have an open discussion about mental health, but I think it’s almost developed into a self-obsession thing; I’ve written about my own experiences in that way to an extent, and I’m pretty happy right now having just got married and with the band doing well. I wanted to step beyond that feeling of self-reflection, because I didn’t want it to become self-obsession.”

So would you say this album is very different to your previous records?

“It’s certainly the most fun record we’ve done. We made an effort to separate ourselves from our own expectations as to who we are and what we can be. We always try to make records that make sense in the context of a greater journey – we’re always pushing ourselves forwards, but at the same time trying not to leave anything behind. Creative freedom was a big thing for this album – it’s a lot more fun, more boisterous and more rock and roll.”

As well as being more boisterous, is it fair to say that -Anon. also takes influence from more accessible genres?

“There’s definitely an R&B-esque sense of groove and gravity on -Anon. that I have to thank Joel [Tyrrell, bass] and Matty [Parkitny, drums] for – the rhythm sections on this album are awesome. As a band, we listen to so many different artists: Joel listens to a lot of The Last Dinosaur and Ocean Alley; Matty P likes pop-punk and rock; Al [Pearson, guitar] likes Royal Blood, The 1975 and The Neighbourhood; and I listen to stuff like Foo Fighters and Linkin Park. So we end up as this amalgamation of all these different influences – we even reference Post Malone on the song Black. We’re pretty lucky to have a fan-base that by and large are pretty open to progression.”

There are some who’ve criticised these new songs, though – how do you respond to those fans who wish you’d stuck to your old sound?

“I’d say that means they’ve misjudged us and put us in a box we don’t belong in. 99% of people who hear our songs love them, but the 1% that don’t will always shout loudest about it. I’m glad people love our old stuff so much – we’re still very proud of everything we’ve done – but I think those people who are craving that older sound are limiting their experience when it comes to new music by putting such strict boundaries around what it is they can enjoy. Our priority has always been to write songs that are good, regardless of style or genre. I’d suggest that the people who don’t like the new songs listen to them a few more times, because you’ll be surprised by how much they can grow on you. What people loved about us from our previous albums is still here, it’s just a different skin on the same bones.”

One of these new songs, Monster, has gained a lot of attention from its use on WWE – how did that come about?

“I think it just came across the right person’s desk! It means so much to us to have our song put in front of millions of people on this amazing platform, and to have it as the theme song as well is insane. It’s something we can point our family and friends towards and they’ll be like, ‘Holy shit, this is a big deal now!’”

Is there an overarching message on -Anon. that you’d like fans to take away from the album when they hear it?

“For the first time in our career, I think I’d have to say no. The point of this album was to create a narrative whereby the listener can put into and take out what they want from it. We wanted to provide something that covered all bases, and at the end of the day, we just want people to listen to -Anon. and enjoy it. The most important thing for us is that people relate to it, regardless of how they do that.”