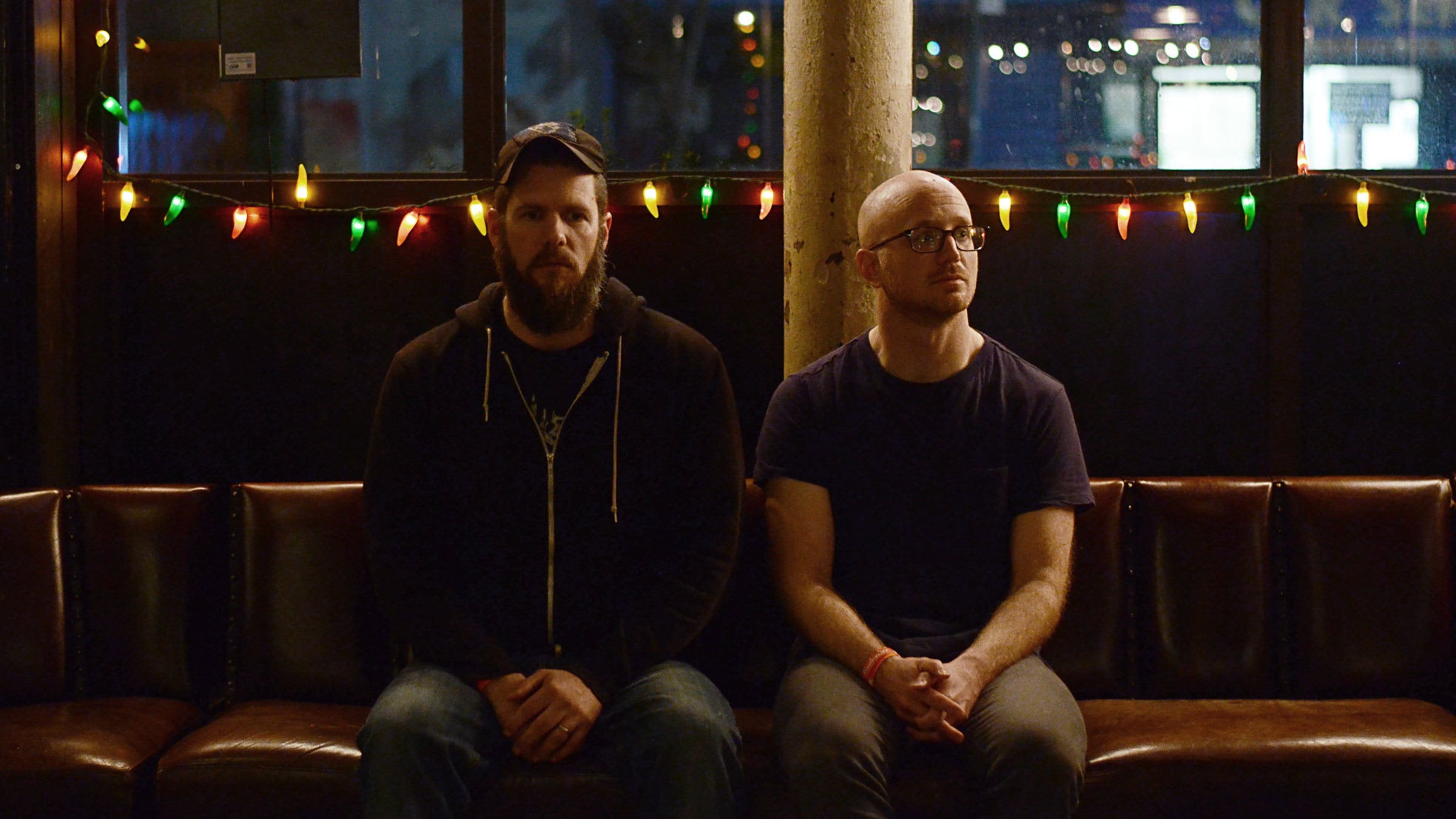 Though little to nothing about their music is funny, Have A Nice Life’s name is a joke. On the surface the band’s name is dripping with sarcasm, the phrase being the kind of thing you only say to someone you have no plans on ever seeing again. The punchline to this version of the joke is the band’s music. The Connecticut duo are hard to pin down to any one sound, you can hear traces of black metal, shoegaze, post-punk, and emo in equal measure, but none of their music would be a suitable soundtrack to the good life.

Dan Barrett and Tim Macuga formed Have A Nice Life in the mid-2000s and quickly earned a reputation for terrorizing local open mics with morbid acoustic songs. Shortly after the death of Dan's father, they started recording those songs on a shoestring budget, burying their voices under dense layers of distortion.

“We never had any intention of these songs existing in the flesh” Dan says, voice hoarse after a sold out show at Brooklyn Bazaar. “We would get together once a week, work on music for a few hours and then go get burritos.”

“Dan was a latchkey bandmate,” Tim chimes in. “He would record part of an acoustic song, go do Tae-Kwon-Do and I’d add a Rammstein ending.”

The result of this patchwork process was 2008’s Deathconsciousness, a double disc album that quickly became a viral hit amongst internet communities like /mu/, sputnikmusic, and rateyourmusic. Aided by their relative anonymity and Deathconsciousness’ ominous liner notes, which described a fictional medieval cult that worshipped God’s murderer, Dan and Tim quickly became the stuff of internet myth.

This word-of-mouth success came as a complete shock to Have A Nice Life. “We thought it was just going to be a pile of CD-Rs in my mom’s garage.” Dan jokes. But soon the album began to pick up steam. “We saw an Italian magazine put it on the best albums of the year list next to Portishead and Meshuggah and thought, ‘Oh god, they think we’re a real band!’”

Tim, who works as a school teacher, recalls an excited student running into his classroom and asking, “Are you the Have A Nice Life guy?” The student, like many other Have A Nice Life fans, had discovered them through the internet, where songs like Bloodhail had become memes amongst music nerds.

Equally important to the band’s popularity was the support of Youtuber Anthony Fantano. Fantano would frequently wear the band’s iconic “NO FUN. NOT EVER.” t-shirt and was an early champion of Barrett’s solo project, Giles Corey. Barrett later took Fantano rock climbing to thank him for the coverage. “He’s fucking yolked so he had no trouble with it. I couldn’t do anything,” Dan laughs.

Despite rarely performing live and having almost no conventional press coverage, Have A Nice Life developed a fanatical cult following. The rawness of their recordings and their deeply distressing subject makes them a hard sell for most listeners, but for an audience hunting down and sharing the darkest music they could find, Deathconsciousness was everything they could have asked for. The record was like a Creepypasta come to life, an album so thoroughly haunted by death that you’d feel cursed by association just listening to it.

“Have A Nice Life fans are intense,” says Jonathan Tuite, whose record label The Flenser released Deathconsciousness’s 2014 follow-up The Unnatural World. “When we first announced that we were putting out The Unnatural World, I had people emailing me three days later asking where the record was.”

On top of their own releases, the duo have earned a reputation for putting out haunting, day-ruining, lo-fi music on their label Enemies List. Before Have A Nice Life hit the stage at Brooklyn Bazaar, Thom Wasluck of Planning For Burial thanked Dan for taking a chance on him 10 years prior, and launched into a performance that shared the same doom-and-gloom ingredients as Have A Nice Life, repurposed for a metal setting.

Have A Nice Life’s influence extends beyond the world of rock music. Tim was stunned to discover that rapper Lil Peep had sampled the band’s A Quick One Before The Eternal Worm Devours Connecticut on his song Shiver. “I recorded that guitar part in my bathtub and now it’s on the front page of Us Weekly for a rapper’s eulogy,” he says, stunned. Despite the generation gap, it isn’t too hard to see shades of the band’s lo-fi immediacy and emotional vulnerability in the emo-influenced Soundcloud rap scene. “I don’t get it, but I get it” Tim says. “That urge to make music with whatever you have on hand.”

Within a decade, Have A Nice Life had gone from an internet oddity to selling out concerts in Brooklyn and playing coveted spots at Roadburn Festival in the Netherlands. Dan and Tim had become, entirely by accident, the patron saints of the alienated, the depressed, and the terminally nerdy music collector.

This, incidentally, is the set up to the second joke in band’s name. The punchline is that despite making music singularly focused on death and suicide ideation, the two are by all appearances living well. In addition to working as a teacher, Tim maintains a farm with his family (the most recent addition; a trio of alpacas), and Dan is happily married and a father of two. Anyone expecting to find pictures of abandoned hospitals or some such edginess on Dan’s social media would instead be greeted with dad jokes and footage of the singer playing songs with his kids.

Have A Nice Life are well aware of the dissonance between how they’re perceived and who they really are. “It’s disorienting,” says Tim. “I try not to think about it.”

Even stranger is how their fans have started to look to the band -- Dan in particular -- as role models. For listeners that related to the intense anxiety and depression portrayed on Deathconsciousness, seeing him become a family man offers a glimmer of hope.

“I get a lot of emails,” says Dan. “And dozens of people come up to me at shows and ask me what it’s like to not be depressed, or ask me how it’s even possible to be happy. I take this very seriously, and it is incredible that people connect with the music. But I’m not a therapist, that’s not my job.”

The truth is that Dan still has plenty to be anxious about. Having just turned 39, Barrett’s fears are those of an adult father. “It terrifies me that there is a real possibility that my kids might die before me.”

These anxieties form the basis of Have A Nice Life’s unfinished new album, Sea Of Worry, due for release later this year via The Flenser. The two men first began working on Sea Of Worry in the same home recorded fashion as their previous albums, but then brought the songs to their live band and began embellishing them with full instrumentation. The result, judging by the songs that the band have been playing live in their most recent concerts, is a more up-tempo collection that leans into the band’s post-punk and goth influences.

Unlike the dirges that fans have come to expect from Have A Nice Life, these new songs are energized and defiant -- fun, even. “Over every mountain, over every hill/You better believe it, we fucking will!” Dan shouts on one song performed at Brooklyn Bazaar. What exactly he’s referring to is hard to make out over the din, but the sentiment is clearly a far cry from the apathy and antipathy towards life that Deathconsciousness revelled in.

The other layer of the joke contained in the name Have A Nice Life is that, to many, it isn’t a joke at all. Whether they intend it or not, the phrase can be taken sincerely. It matters to the band that their music helps their fans, even though they resolutely will continue to make it for themselves first. Their survival is proof to their fans that it is possible to make it out of the darkness. Gathered around Dan during an overwhelming performance of “I Don’t Love” the fans sing back the words “I don’t want to live at all!” And yet here they all are, Dan and Tim included, alive, and for at least one night, living well.

See Have A Nice Life on tour:

Album Review: Have A Nice Life – Sea Of Worry

U.S. shoegaze crew Have A Nice Life march onward on Sea Of Worry…