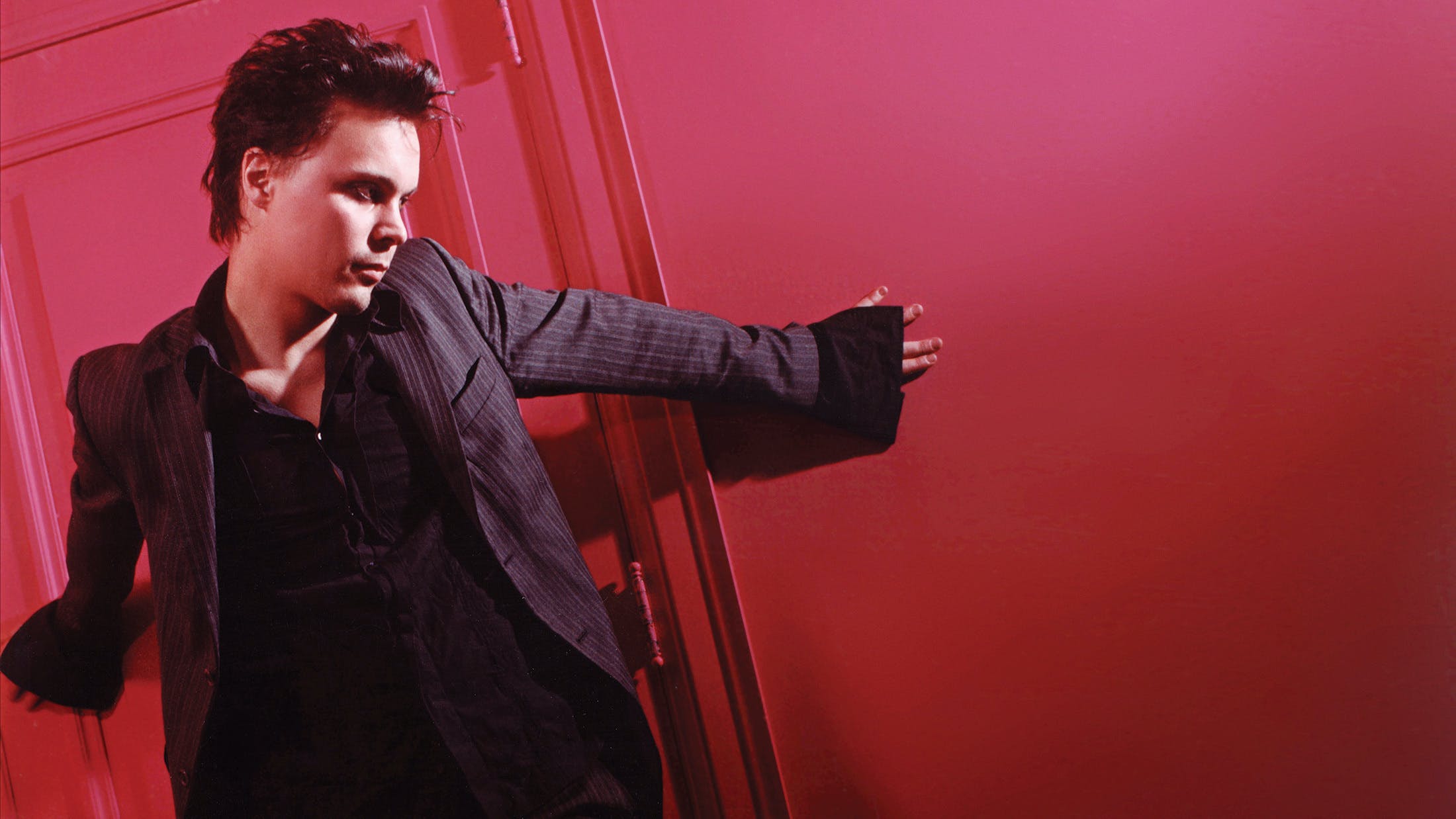 The first time Kerrang! clapped eyes on Ville Valo, we were smitten. This was back in the early spring of 2003. The then 26-year-old frontman and public face for HIM – His Infernal Majesty – from Helsinki, Finland was in the UK to promote his band’s fourth album, Love Metal, which was just days away from its public unveiling.

To this day, it is an album that is still recognised as being one of the 21st century’s pivotal hard-rock releases. In December 2017, the band said their final goodbyes to the UK with a pair of concerts at the Roundhouse in London, part of a farewell tour that would culminate in a last stand at Tavastia in Helsinki on New Year’s Eve. A decade and a half earlier, however, at least for Britain, all of this was brand-new.

“People can’t help but stare when Ville Valo walks past,” wrote a somewhat breathless Paul Brannigan in 2003 for the occasion of HIM’s first Kerrang! feature. “They don’t know who Ville Valo is, but they know he must be someone, for he oozes the sort of insouciant cool that only the staggeringly confident and achingly hip can pull off. To walk alongside Ville through the hateful tourist trap that is London’s Leicester Square on a chilly spring evening is to know how it must feel to be invisible, for passers-by are blinkered and focused as their puzzled eyes lock on the Finn’s chiselled features, searching for clues as to his identity. They’ll search in vain, for in this country Ville Valo is a nobody, albeit a decidedly handsome nobody.”

With the release of Love Metal, this state of anonymity would soon change. The album may have limped its way on to the UK album chart, peaking at a paltry number 55 – with the record initially failing to find a release at all in either the United States or Japan – but perhaps even this lowly status was creditable for a band whose music had previously been dismissed by Kerrang! as a sound that “[plodded] along like a nocturnal donkey wearing fake fangs and a cape”.

Elsewhere, though, there was evidence that the band’s fortunes were changing for the better. Kelly Osbourne, daughter of Ozzy, bought 10 copies of Love Metal for distribution among her friends, some of whom had the band’s logo tattooed upon their person. Bam Margera, one of the star’s of the then-vastly popular Jackass, was both a fan and the director of the video to Buried Alive By Love, the second single from the band’s then box-fresh album. By now, Ville Valo and HIM were emitting the most prized sound there is to music industry ears: a buzz.

“My hopes are that this album will sell more than Michael Jackson’s Thriller and then I’ll be able to buy [Jackson’s ranch] Neverland and live in an oxygen tent with [pet primate] Bubbles,” Ville deadpanned at the time. “Although I suspect that’s not going to happen. And I’ve just got to live with it.”

But the fact that England and the United States were at first slow to start humming HIM’s songs in the shower didn’t matter as much as it might once have done. The early years of the 21st century saw the first faint challenge to the hegemony of rock bands for whom English was a first language. The brat-metal of Limp Bizkit and the lumberjack rock of Nickelback – both of whom wrote lyrics that suggested English was their fourth or fifth language – did continue to dominate the airwaves, but elsewhere the behemoths that were Metallica were still months away from ending a four-year absence with the release of the – let’s be kind – puzzling St Anger. Remarkably, a year before the unveiling of American Idiot, Green Day were seen as a band whose time was up. Into this vacuum came Germany’s Rammstein, Sweden’s The Hives and HIM, all of whom spearheaded a trend that continues to this day with the likes of Kvelertak and Volbeat.

But in 2003, it was more than Ville Valo’s exotic accent that set him apart. Love Metal was not only the title of HIM’s latest collection, it was also the name they gave to the genre of music they played. It became almost a way of life for the band’s growing legion of diehard fans, many of whom would proudly display their eternal love with ‘heartagram’ tattoos.

A gothic sprawl of pop sensibilities with a well-thumbed collection of Black Sabbath guitar tablature books behind them, HIM’s lyrics concerned themselves not at all with the usual metal tropes of destruction, anger, contempt and hatred. Instead, Ville turned his attention to pondering the imponderable: affairs of the heart and the hazards of love.

“There are far too many bands singing about hate and politics and religion, and that’s what I didn’t want to do with my music,” he said at the time. “I wanted to be in a black metal band, but when I heard Dimmu Borgir’s Enthrone Darkness Triumphant, I knew there was no point. Anyway, love and sex is at the core of everything. I know I’ll never figure love out, but I can keep trying.”

It is something of a miracle that Love Metal was made at all. Exhausted from the tour undertaken in support of their third album, Deep Shadows And Brilliant Highlights, HIM had actually toyed with the idea of disbanding. By this stage the band had already sold two million records in northern Europe and had in this sense made their point. By now Ville himself was sufficiently famous in his home city that an interview with this reporter in 2003 was hijacked by a Finnish journalist and a photographer who spied us in a rooftop bar and decided to muscle in and chance their arms.

With his colleagues holidaying, Ville decided to write the songs that would eventually comprise Love Metal. This he did while smoking 100 cigarettes a day, a habit that continued for some years. When not working, he would call in on his father who owned and ran a city centre sex shop that he bought 12 years earlier “for a joke” and at which the teenage Ville used to work. By now in his 20s, the singer and his band worked in a windowless rehearsal room in Kaapeli, a former mobile phone factory since reinvented as a bar and a place in which musicians could practise their art. HIM were evicted from their previous practice space for repeatedly urinating on walls, which duly began to rot. Even in their new digs, they still hadn’t bothered to find out where the toilets were. Instead, relief was taken in plastic bottles as well as in bowls that were then left outside the door for the janitor to dispose of. Predictably, the janitor wasn’t best pleased with this arrangement, and once again HIM were soon being threatened with expulsion.

For someone who in 2003 was on the verge of becoming one of the most glamorous and instantly recognisable faces in the world represented by this magazine, Ville Valo took no shame in living like a schlub.

“In Finland musicians aren’t really respected,” he explained. “In Los Angeles people are interested and respectful of the fact that you’re in a band, and there no-one has heard our music. I love Helsinki and I love Finland, and the fact that I’m away from here for six months every year means that I never tire of the city. But I do wish we got more respect sometimes.”

But if kudos was in short supply on the home front, in international waters ears were being bent in HIM’s direction. As well as entering the German album charts at number one, Love Metal would (eventually) also find an audience in the United Kingdom. The song The Funeral Of Hearts provided the band with a bona fide Top 20 hit single. In the pages of Kerrang! magazine, Dave Everley wrote that “Love Metal isn’t so much an album title as a mission statement. It’s a largely confident, occasionally coquettish come-on from a band who know the ins and outs – not to mention the ups and down – of shagging. It is, in short, a shameless attempt to get you in bed.”

And it worked. Looked back on today, HIM’s fourth album heralded the arrival of a different kind of groove. They were a band who crooned and seduced rather than ranting and insisting on calling their audience “motherfuckers”. They had style and a little bit of class in their make-up. And in Ville they had a frontman who took a relaxed approach to being a rock star, and who in doing so only ratcheted up his undeniable star quality higher.

“Most European rock music sucks,” he once said. “We’re just trying to fight back and prove that some Scandinavians can be good at what they do. But if you only have the money to buy one album right now, get Black Sabbath’s Black Sabbath. You can get around to buying Love Metal another time.”