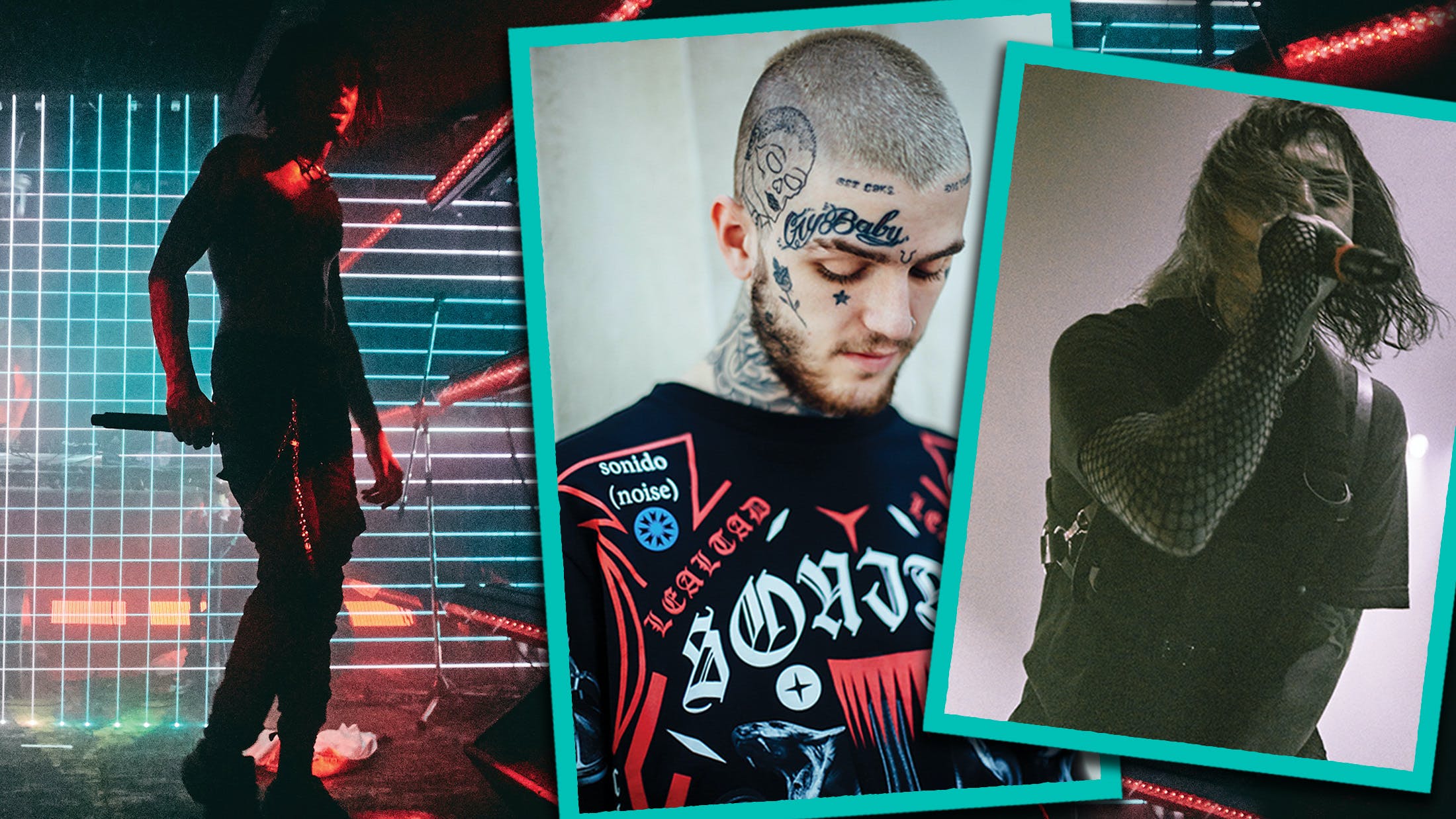 SoundCloud rap, emo rap, trap metal and even the grimace-inducing rap metal are different, nebulous terms for similar, not-quite-the-same, but very much interconnected sonic ideas. A genre Venn diagram of sorts, defined by a shared commingling of hip-hop and heavy music tropes, blending trap beats, screams and rap vocals. Not in competition, with one fighting to win out over the other in the style of Aerosmith and Run-DMC’s groundbreaking 1986 single Walk This Way, but working in tandem to create something more than what they might offer individually.

It’s a constellation of genres with a hustle-hard, DIY ethos, championed from different corners and dragged from the bedroom to the mainstream by artists such as Lil Peep, GHOSTEMANE, and other members of the West Coast-based Thraxxhouse and GothBoiClique collectives. Loved by fans and assailed by detractors in equal measure – often viewed as a kind of abomination that no-one asked for – it’s worth remembering that, as popular as this collection of micro-genres are right now, the coming together of hip-hop beats, rap vocals and guitars isn’t exactly new.

Where, for example, artists like Florida-born, LA-based GHOSTEMANE are working with a live band to fuse crushing hardcore, industrial and metal-tinged riffs with off-kilter, half-sung MC-type vocals to create an intense sonic maelstrom, its roots can be traced back to the nu-metal boom of the early ‘00s, and bands like Limp Bizkit, Deftones and Linkin Park, as well as early Three 6 Mafia.

In fact, in a 2016 interview with Metal Insider, GHOSTEMANE’s Eric Whitney describes the permeable membrane between metal and hip-hop, offering that “nowadays the classic differences between both genres are fading… Artists and kids are more open-minded than ever, which is enabling new creative music to be born. I think even though hip-hop and rap dominate the radio and mainstream culture, metal and hardcore is still very much alive.”

As much as being about what’s alive right now, however, the emo rap scene is also very much about death, rebirth, and evolution. Speaking to fans on Twitter, de facto head of the GothBoiClique collective Adam McIlwee, AKA Wicca Phase Springs Eternal, offered this gem of advice: “Don’t call yourself an emotional rapper,” he said. “This isn’t going to last.” And while it may seem strange from an artist very much associated with helping to pioneer this new sound, in context it makes perfect sense.

Adam formerly fronted the emo-tinged Tigers Jaw, and what he and his sonic contemporaries – Horse Head, yawns, fish narc, døves, Nedarb, Cold Hart and the late Lil Peep – know better than anyone is that the genre has already had to evolve way beyond the bounds of its eponymous influence.

There is, however, still a sound and a scene associated with emo rap. Among its frontrunners and trailblazers – those more interested in creating something more substantial than riding the wave boosted by Lil Peep’s mainstream success – it has become more than the sum of its parts. But if no longer just a collection of samey sonic tropes, and if not emo rap as a genre, then what?

Speaking to Smokeasac (real name Dylan Mullen) – having worked on Lil Peep’s Come Over When You’re Sober Pt. 2 and trusted with posthumously refining the late rapper’s sound, as well as being an artist in his own right – the producer draws similar parallels in the lineage of his chosen genre.

“I think that the connection between hip-hop and heavy music has been there since both genres started,” he suggests. “It wasn’t long before some of the OGs of the music scene were doing it; going all the way back to artists like Run-DMC and Korn and so many others. Working on our sound was kind of our way of introducing a whole new method of attacking that hip-hop and heavy mix. It felt right for both of us coming from musical backgrounds where we grew up being heavily influenced by rock bands and rap, and later on some of the people who were already combining those genres.”

It’s a way of thinking also shared by the likes of Amazonica – one of the breakthrough female artists in what is undoubtedly (and somewhat problematically) a male-dominated scene. She sees similarities with the way in which nu-metal was often dismissed by music critics at the peak of its popularity.

“I’ve experienced a lot of snobbery with the older generations at shows and online,” the London and LA-based DJ explains, “whereas the young fans I’ve met who are coming to their first gigs are so open-minded. They’ve grown up with the internet and are used to genre-hopping. They love the new concoctions of genres, which is so fresh and exciting. I love heavy, emotive music and the more different creative ways of delivering that raw emotion the better.

“If you’re doing something new there will always be a push back from the old guard,” she adds, “but the proof is in the pudding. If there’s a mosh and people losing their shit at the shows then you can’t deny it, even if you don’t like it.”

In that sense, too, like nu-metal this is a genre at least partially driven by the intensity of its fan base. It’s a peculiar kind of energy and devotion, but one which the enigmatic, UK-based Scarlxrd (with his 1.5 million Instagram followers and credentials as a former nu-metal frontman with Myth City) understands as well as anyone.

“It’s like punk,” he reckons, as to what sets it apart from other music in 2019. “Punk came on the scene with people playing in basements and things like that, and I feel like as the internet has come around SoundCloud is the basement now.”

And having carved out his own niche brand of trap metal, he’s equally stoked on what the rest of the scene is creating.

“We’re all inspired by what we’re inspired by. With the emo rap sound, I feel like a lot of people are into heavy bands, so the rise of that is dead cool. Everyone likes melody, you’ve got people like [U.S. rapper] Juice WRLD who could take his vocal and whack it behind some guitars and it’s [the song] Bullet For My Valentine. It’s crazy and it’s sick. I love it.”

And this applies to other corners of the sprawling scene, too. Take Horse Head, for example. Something of an outlier among his GothBoiClique peers, he taps more directly into his emo and pop-punk influences than even Lil Peep, riffing on bands like Rilo Kiley and Taking Back Sunday on his 2017 album This Mess Is My Mess. Currently on tour with Wicca Phase Springs Eternal, having supported GHOSTEMANE at The Dome in London back in 2018, Horse Head may be a musical oddity within a scene boasting a vast sonic spectrum, but he’s also emblematic of what it thrives on as a whole. This is a community of artists who respect and feed off one another’s work as much as the influences they wear so readily on their sleeves.

It’s this openness that defines the genre at large; both in terms of engagement with the music that it holds dearly and the willingness and desire to engage with the fans who support it. These artists don’t thrive on distance or hierarchy between themselves, their influences, or the people that listen to their music and come to their shows.

With all this in mind, it is perhaps Smokeasac’s Dylan Mullen who most succinctly explains not only the symbiotic relationship these artists have with their fans, but also the constant need for evolution within an already amorphous genre – something that ultimately aided in the demise of its nu-metal’s forebears.

“There is definitely more room for this scene to grow,” he believes. “Peep will always be looked at as a pioneer of this new sound, but I think we opened the door for newer, younger kids who might have felt like we did when we were young, to do what we did: make music as therapy that then becomes therapy for their fans. I think that this scene is definitely going to grow into something great.”