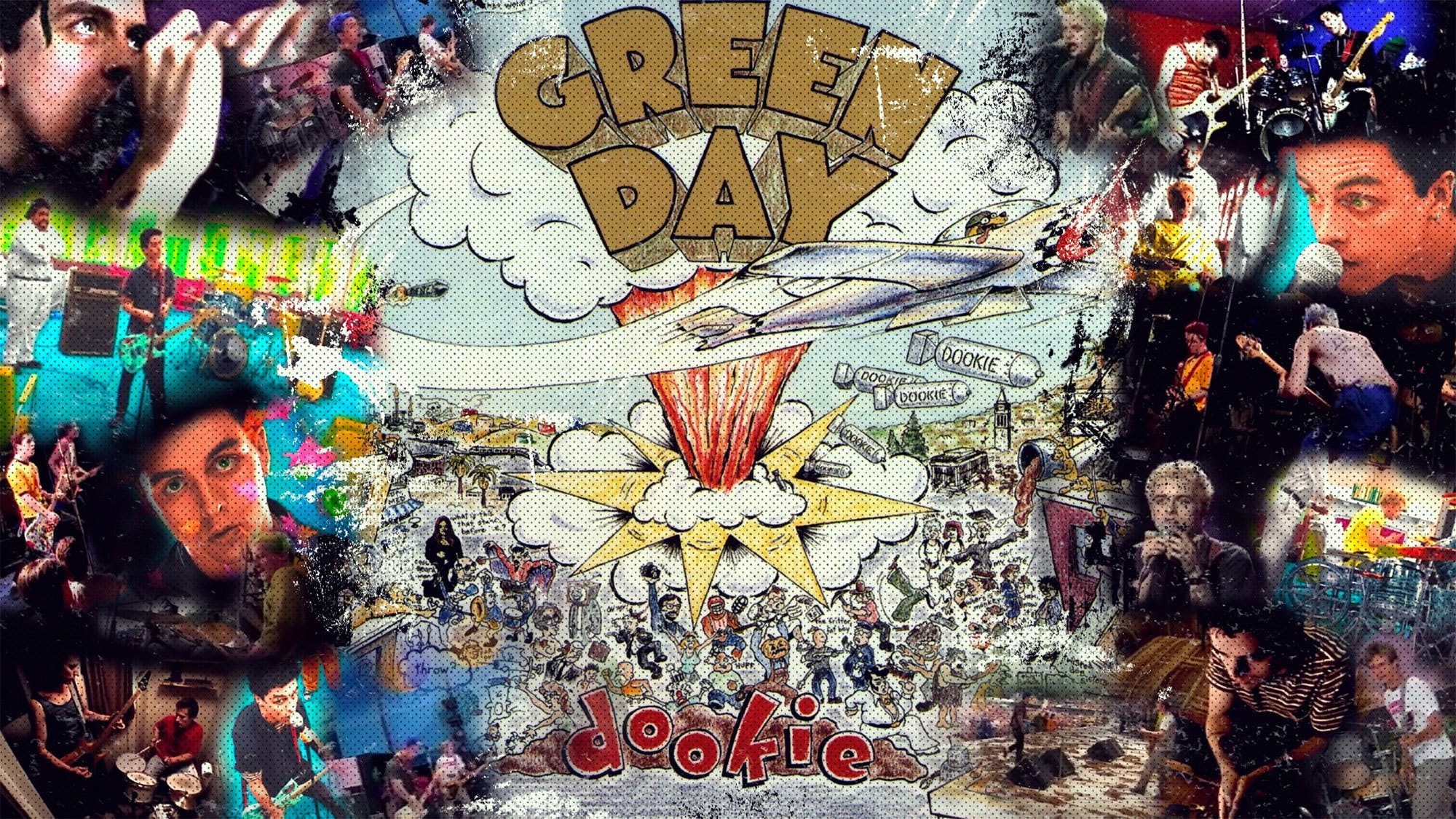 The year was 1993 and, notoriously, sharks were patrolling the waters of rock’n’roll’s subterranean scenes. In the wake of Nevermind’s paradigm-shifting success, major labels had scrambled with their chequebooks to every percolating punk rock scene across the U.S., in the hope of snagging the next Nirvana and copping some of that sweet crossover action.

So maybe it’s a testament to the modesty of Billie Joe Armstrong that, when A&R bods began phoning Larry Livermore, founder of Lookout! Records, in a bid to sign Green Day, the frontman waved them off, believing they had to be crank callers.

But they weren’t. And soon, Billie Joe and his bandmates found themselves in the unlikely position of being wined and dined by execs toting corporate credit cards, the subjects of a bidding war between multiple big labels. One exec even tried to woo the band with a trip to Disneyland, though they remained unmoved. Indeed, it was only once they met Rob Cavallo, a higher-up at Warner Bros., that Green Day began to seriously entertain the idea of ditching Lookout! for a major label. A record producer who also doubled as a session musician, and an unabashed lover of punk rock, Rob had been blown away by a cassette of Green Day demos, and had pushed the label to sign the Bay Area trio. Similarly, it was the trust his fervour and temperament inspired that led Green Day to sign with Warner Bros. over its competitors.

The punker-than-thou crowd at 924 Gilman, the anarchic underground club in West Berkeley that was home to Green Day and their peers, took the news badly, perhaps even worse than the staff at Lookout!, for whom they sold more records than any other act on the label. Green Day’s leap from the underground wasn’t driven by greedy dreams of multi-platinum success, however. “We didn’t have stars in our eyes, we just wanted our records to get out there,” drummer Tré Cool told VH1 of their motivation for graduating to the big leagues. That didn’t stop some fans in the audience at Gilman screaming ‘sellout’ when news of their signing to a major filtered out to the scene. Tré Cool responded by asking the kids if they loved The Clash and the Ramones, and then pointed out that all of those bands had been signed to major labels, too.

A compelling argument, but it didn’t save Green Day from being effectively “banned” from the stage of their beloved Gilman, which as a matter of principle refused to book groups signed to major labels. By joining Warner Bros., then, Green Day were burning bridges, but Billie Joe remained resolute. “I couldn’t go back to the punk scene, whether we were the biggest success in the world or the biggest failure,” he reflected. “The only thing I could do was get on my bike and go forward.”

Rob Cavallo signed on to produce the album, and booked the group in at Fantasy Studios in Berkeley, a plush recording palace that had previously hosted the likes of Journey, Europe and R&B heroines En Vogue. Green Day had approved Fantasy primarily because it was close enough to their home that they could cycle to the sessions – they hated cars. Billie Joe later described Fantasy to MTV as having “that ’70s, coke-y vibe: mahogany and strange dead wood around the place.” Every day at the studio underscored a sense that things had changed for the band, perhaps irrevocably. They’d spent a paltry $1,900 rush-recording their first two albums at Art Of Ears. Dookie, by contrast, would cost the band a whopping $105,000 – still a slight budget by major label standards, but oodles of cash for a group that was living in a dingy warehouse above a brothel on the sketchy side of town.

The band didn’t squander their budget on upmarket take-out or rock’n’roll excess, however. Their producer set a strict schedule, with the band arriving at midday, and rarely leaving before midnight. They were working hard; crucially, however, they were loving it. “It was like going to college every day,” bassist Mike Dirnt told VH1, as Rob and the band set about coining what would become the trademark Green Day sound, taking the amiable, energised pop-punk of their earlier records and pumping up the volume, sharpening the edges and boosting the vocals until they were delivering fiery melodic pipe-bombs. They worked fast; well-rehearsed and tour-tight, the group played with a focus born in part of a desire to nail this opportunity as best as they could, and to silence the naysayers amid the Bay Area punk scene who predicted they’d fail in the major leagues. The album was completed in just under two months, with Billie Joe recording all the vocals on all the songs in only two days.

The resulting record was a triumph. Rob could take some credit for that, capturing the band in higher fidelity than they’d enjoyed before (compare the muscle and dynamics of the Dookie version of Welcome To Paradise to the earlier, fuzzier take they’d released on 1991’s Kerplunk!). But the secret to Dookie’s success lay in the songs and performances. More so than any of their Bay Area contemporaries, Green Day’s tune-tastic attack drew heavily upon a classic lineage of punk rock and its influences, and one could also discern the haywire drive of The Clash, the sneering energy of the Sex Pistols, and even the power and volume of The Who within their arsenal. Once they hit the big-time, no critic or cultural commentator would fail to reference Billie Joe’s bratty yowl – but what mattered on Dookie was how brilliantly he bent it to the song, riding a perfect tension between attitude and fidelity to the melody, that unlikely cocktail of pop and punk operating in perfect turbulent synchronicity.

These were anthems – you could tell that in melodies so massive and addictive even your postman couldn’t stop whistling them. They were also anthems in how perfectly they captured the aimless mindset of a generation (a mindset subsequent generations have effortlessly been able to tap into). Billie Joe had always been a canny lyricist, subtle and witty enough to disdain the sloganeering and bluster of much punk rock in favour of stories told from his own slanted perspective. The songs of Dookie caught him at a peak, however, essaying the casual disaffection of the dysfunctional teen/20-something punk kid.

His songs were bulletins from the dingy squats he’d shared with Tré and Mike, where he distracted himself from the anxiety disorder he’d been suffering from since his parents’ split years earlier with drugs, rock’n’roll and cheap thrills, the very cheapest of which was masturbation. The frontman grabbed hold of this topic with more passion than any punk had mustered since The Vapors’ legendary wank-anthem Turning Japanese, beating it to a pulp on Longview, a tale of boredom and derangement, built around a bassline Mike penned while tripping on acid, that sees the vocalist escaping everyday mundanity by indulging in hand-to-glans combat.

There was little glamour in the world Green Day painted – Longview had their leader stuck to a ‘velcro seat’ and smelling like shit, while the music video, shot at the group’s then-current mucky digs, revelled in details like the dingy sofa, the garbage-strewn coffee table, the frankly gross bathroom, while the band later reeled at how sharply the camera had captured their zits. But Dookie – named in tribute to the bouts of diarrhoea the group experienced on the road, due to their poor diet – had depth beyond just jerking around.

Billie Joe Armstrong’s relationship with an idealistic feminist ex-girlfriend, Amanda, inspired the deft She, where he yearns to ease her worries, and the romantic Sassafrass Roots, where he wants her to take things easy for a change and go waste time with him (she dumped him before the album, and legend has it she flew off on a philanthropic mission to Ecuador). When I Come Around was a self-effacing account of the frontman’s own emotional shortcomings, prompted by a temporary separation from Adrienne, the woman he would marry in 1994. Coming Clean, meanwhile, was a brave and ground-breaking exploration of Billie Joe’s bisexuality, a subject he openly discussed after the album hit huge, unafraid of any backlash from possible bigots in Green Day’s newfound audience (the group would soon take queer-radical punks Pansy Division on tour with them).

And then came Basket Case, the album’s biggest hit, inspired by their frontman’s panic attacks, but speaking to wider anxieties and the loneliness and paranoia of modern life. Dark stuff, perhaps, but Billie Joe tackled the subject with wit and vim, and Green Day’s anthems offered catharsis, but also a messy good time. He wasn’t the first songwriter to be proclaimed as the poet laureate of Generation X – this was the era of Kurt Cobain and Eddie Vedder, the Seattleites giving voice to a seemingly universal anxiety and sense of heaviness. But Billie Joe felt no kinship with the grungers, deeming their rock rote and their self-importance alienating. His songs were funny, vulgar, touching, and barrelled along at leopard’s pace.

In the wake of Kurt Cobain’s suicide – which occurred a couple of months after Dookie’s release – Billie Joe Armstrong presented a more upbeat flavour of punk rock hero in a suddenly bleak era. In their music videos, which quickly became MTV favourites, he resembled a mischievous kid with a punk makeover, perma-fidgeting and restless-legging in his low-slung guitar stance, eyes huge as an Anime character and mouth caught between a sneer and a snarl – the perfect pint-sized pop-punk heart-throb.

In the summer of 1994, Green Day joined the line-up of Lollapalooza, alongside Smashing Pumpkins, Beastie Boys and many more – a big deal in alternative rock, helping underground acts to crossover to the mainstream. Green Day would prove to be the tour’s breakout stars – an important step in their ascendancy to superstardom.

Though it only shifted 9,000 copies in the week of release, sales for Dookie quickly began to climb, superseding all hopes. Its commercial triumph became the tide that raised all boats on their scene, Rancid and The Offspring and even SoCal stalwarts Bad Religion following in their wake. But perhaps the key moment in Green Day’s success story was their appearance at Woodstock ’94 the summer after Dookie’s release.

A 25th anniversary rerun of the original peace’n’love hippy festival, Billie Joe walked onstage yelling, “What is this fuckin’ free hippy love shit?” Three songs in, however, and Green Day’s full-pelt punk-a-rama had stirred up a chaotic mosh-pit which took pleasure in hurling lumps of mud at each other. Mike Dirnt sarcastically observed, “Yeah, we suggest that you throw mud, that’s fun,” to which the pit responded by throwing mud at the band instead. Thus began a mudfight between audience and band that left the stage resembling a farmyard witnessed by millions of TV viewers at home, encapsulating the irreverent, joyous, anarchic attack of this brilliant band, and sealing their reputation as the primo punk rock event of their generation.

While they might have left the stage caked head-to-toe in mud, they staggered to the wings as heroes and incipient superstars. Dookie proved that Green Day could become a multi-platinum phenomenon without “selling out” or dulling their snotty edge. This was happening on their terms – and the 20 million copies the album has shifted in the years since prove Billie Joe and co.’s instincts were spot-on.