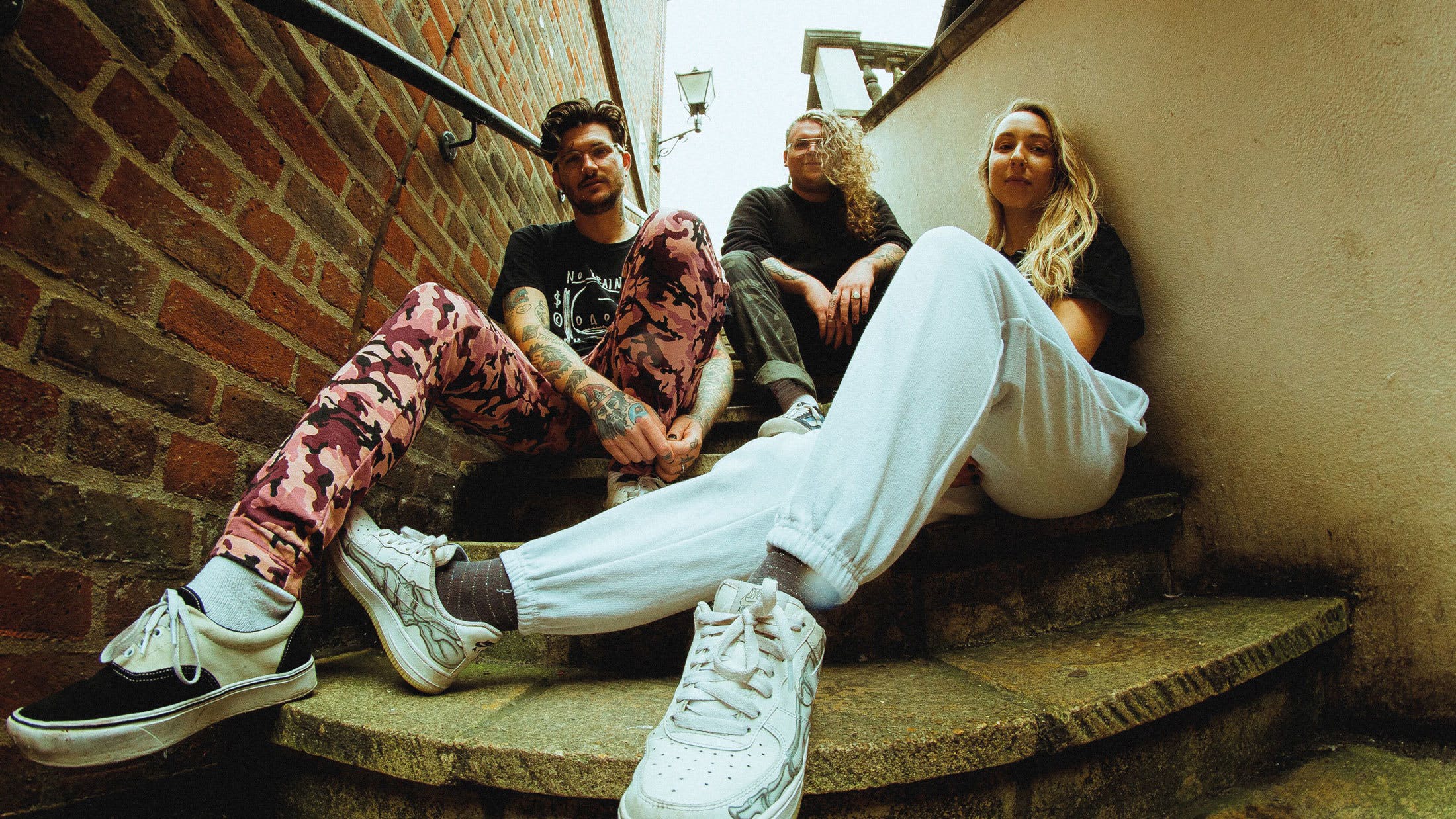 Becky Blomfield worked 50 hours last week. She’s only been at this job at a local vape shop for three weeks now, hired as a part-timer, but is keen to assist her boss with the extensive online orders they’ve received, so she’s gone above and beyond the call of duty.

“I feel very fortunate because I’m still in work, knowing that lots of people have been laid off because of all the uncertainty at the moment,” she explains to Kerrang!, the exhaustion evident in her trembling voice. Becky’s desire to keep an independent business afloat, and acute awareness of the hardship of others is typical of a young woman who’s lived the majority of her life with DIY ethics and, by her own admission, a propensity to take on the burden of others – sometimes to a fault. She welcomes the distraction, too.

“I think it’s the only thing keeping me sane,” she admits. “If it wasn’t for this and releasing a new album that nearly didn’t happen at all, I think I’d have lost the plot.”

By we, Becky means Milk Teeth, the band that she formed in 2013 and remains the sole founding original member of, having graduated to fronting them and becoming the primary songwriter after singer-guitarist Josh Bannister left in 2016. More departures were to come: guitarist Chris Webb exited in June 2018, “with immediate effect” according to an official Facebook statement made by the band at the time, while Billy Hutton, the man who replaced Josh, walked away three months later to tour manage the likes of Boston Manor.

This upheaval in Milk Teeth’s ranks, and the reasons involved – ranging from personal decisions to circumstances unexplainable due to legal sensitivities – help explain why Becky suggests Milk Teeth the album was such an uncertain prospect for a while. In truth, Becky’s relationship with music had seemed irretrievable for a time.

“I felt incredibly distant from it,” she explains. “I couldn’t see how we were going to carry on, and I didn’t particularly want to, because I felt so abused by people in the industry. I felt too tired to keep going yet I was forced to, which changed my outlook and caused me to take steps so I didn’t pile so much on my plate, because that’s not helpful for anybody no matter what their career is.”

While Becky’s current workload suggests she’s not adhered to these self-imposed parameters to the letter, the emergence of a new Milk Teeth record confirms she got over the other element that had been holding her back – a lack of confidence in her own abilities. These new Milk Teeth songs aren’t actually that new at all, having been demoed with the band’s previous line-up, becoming points of contention and leading Becky to feel her sizeable contributions were no longer appreciated.

“They’d been shared with previous band members, and we even rehearsed them, which makes it doubly sad. I didn’t get much say, even though they were my songs,” she says of the feeling of near-defeat. “I definitely had less of a power position, like my opinion wasn’t treated as valid. I needed someone to tell me what I was doing was worthwhile and not a heap of shit.”

READ THIS: Becky Blomfield: The 10 songs that changed my life

One of the two people providing that reassurance was Em Foster, who filled in as Milk Teeth’s touring guitarist after Chris Webb left and soon became a full-time member of the band. “She’s played a big part in me finding the confidence to keep going.”

Milk Teeth toured with Em’s band Nervus in March of 2018. Despite Em being high up on Becky’s list of dream collaborators, the two had minimal contact for most of the jaunt, with Milk Teeth’s inner tensions and Becky’s depression meaning she wasn’t really talking to anyone. Becky managed an introduction later, though, as well as an apology for keeping her distance. “Em offered to tattoo me,” recalls Becky of their icebreaking encounter. “She ended up doing a sunflower tattoo, which took a while, so it gave us plenty of time to chat. I quickly realised we had a lot of common ground. I didn’t go home with [the rest of Milk Teeth] after the tour, so I joined Nervus in the Travelodge they were staying in, eating pizza and being silly. I ended up sleeping in a cupboard under a towel, which made them think I was a bit of a freak – but it was one of the best nights of my life.”

Despite the opposition and oppression Becky has experienced, she never once considered going solo with the batch of demos she took to producer Neil Kennedy, the other person who supported her endeavours at a crucial point. Surely, with everything Becky came up against, and an existing, albeit dwindling, belief in what she’d written, she could have gone it alone?

“These songs were always written as Milk Teeth songs, so I’d never have wanted to take them out on my own,” she says, illustrating the mixture of certainty and stubbornness that’s seen her stay the course, even if she briefly considered going into gardening when all else seemed lost, given its positive effects on mental health. “It’s been such a big step to get this done that I could never consider doing anything on the side right now.”

Although Neil was responsible for production on 2016 debut album Vile Child – as well as 2017’s EPs Be Nice and Go Away – there was a markedly different approach this time around; a more direct approximation of a dynamic that offers Becky more than just musical simpatico, while still playing lip service to the same influences the band’s always had, namely ‘90s rock favourites like Nirvana, Hole and the Smashing Pumpkins. With the songs existing in fairly fleshed-out form, and with the trio – completed by Gold Key drummer Jack Kenny, replacing Oli Holbrook – keeping things simple, recording at The Ranch Production House in Southampton took just 10 days.

The album’s sentiments are as raw as its resulting sound, and largely deal with the pain, loss and redemption Becky experienced in the wake of the collapse of Milk Teeth’s previous iteration.

“Destroyer has an edge to it, which breaks up some of the more reflective stuff,” she says of one of the more angst-ridden offerings. “When the band fell apart there was a grieving period where I thought about what had been and what had happened. There was such a mix of emotions that I think the album is actually quite reflective of the five stages of grief.”

The final stage of grief is, of course, acceptance, and the lyrics to Transparent were changed to reflect the more hopeful place Becky finds herself at.

“We made it more empowering. The context was shifted so that it felt like more of an anthem that makes me feel strong singing it, rather than taking me back to a time I didn’t feel good at all.”

That sense of empowerment is thanks in no small part to Becky’s two bandmates, who live far from her home near Guildford – Em in Margate and Jack up Newcastle way – but offer a cohesion unaffected by proximity.

“They are more willing to communicate, to collaborate, and not tolerate people abusing other people,” says Becky matter-of-factly. “In this industry there are a lot of behaviours that are covered for and allowed to continue that aren’t okay. There’s definitely a much higher level of accountability and respect now that Em and Jack have joined the band. I’m quite a serious and emotional person naturally, and they both have those qualities, as well as being very funny, which has helped lift me up. They back me on decisions rather than making me feel like it’s me versus the rest of the band.”

READ THIS: 15 punk songs to beat the boredom

While Becky considers Milk Teeth the album “a key milestone in the transition period” of Milk Teeth the band, it feels like a fresh start rather than a final roll of the dice for a band given their fair share of chances over the years.

“It’s just so much nicer,” is Becky’s modest but sweet assessment. “I’m happy to go to work. I wake up and want to do it, whereas there was a point for two years I didn’t want to; I didn’t feel like it. Now I’m excited to practise, I’m excited to write, I’m excited to lock heads and see what comes out.”

Given what’s now come out of the trio’s connecting noggins, and Becky revealing that she’s already got three new songs written, the future the world once imagined for Milk Teeth seems possible again, born from a release that’s self-titled for good reason. “This is who we are and this is how we sound,” says Becky. “The album you’ve been waiting for is here!”

Milk Teeth's self-titled album is out now via Music For Nations.