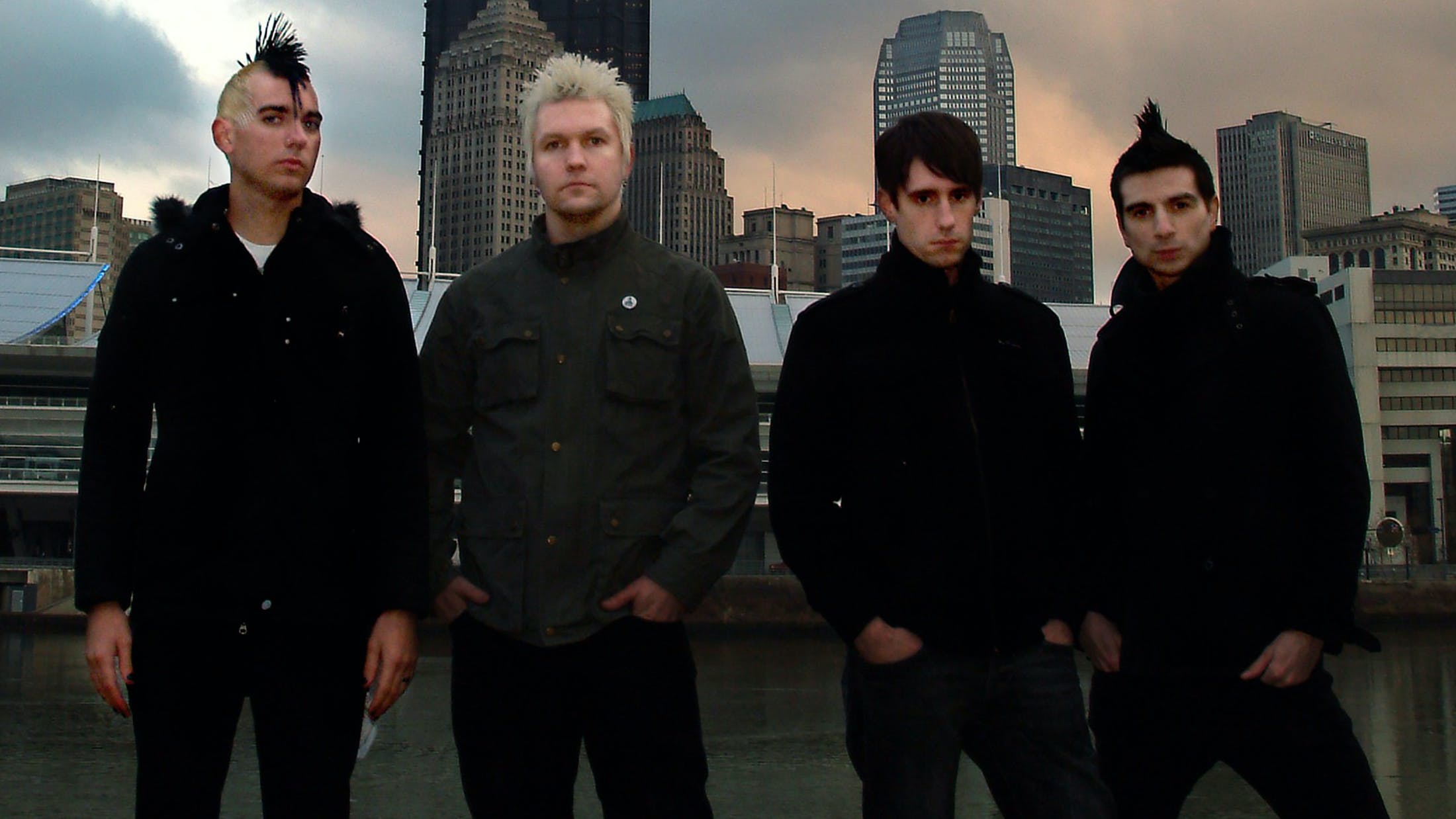 Released in 2006, For Blood And Empire was Anti-Flag’s first album to be put out on a major label, and the punks from Pennsylvania made the most of their boosted platform, filling it with songs that chastised the ‘War On Terrorism’ that had been launched by the United States government in the wake of the September 11 attacks.

But one song that broke away from the overarching feeling of the record was This Is The End (For You My Friend). It was a track that still burned with intense feeling, but instead turned its focus towards the domestic problems of self-value and insecurities that people handle on a daily basis. Built around an infectious riff, it subsequently became one of the band’s most popular and most played songs. Here, singer and vocalist Justin Sane talks us through its conception.

“[Anti-Flag bassist and vocalist] Chris #2 and I were sitting on the tour bus in Europe. I remember that we had an acoustic guitar that we’d picked up at some second-hand shop, it was a really shitty acoustic guitar. #2 had that riff, and he played it for me, but then he was like, ‘What do you think if we put this slidey note in there.’ Which I was like, ‘Wow, it’s really weird, but it’s really cool.’

“Often I feel like inserting something unusual or strange into a song is what makes it unique. It’s the odd things or the extreme things in music that I always find the most appealing and the most attractive. As we were showing the song to people and running it by our bandmates, any time we would throw that extra note into it, everybody would kind of look at us like, ‘Is that cool? Why is that there?’ And so it took quite a while to just be really sure that that was the thing. But there just came a point as we were demoing the song and playing that note and just realising, like, ‘Man, this is the shit.’ It’s sort of like the Pixies, they start certain songs and they just hit a note and you’re like, ‘Oh, that’s the song.’ It’s one of those moments.

READ THIS: Every Anti-Flag album ranked from worst to best by Chris #2

“We really wanted the song to be a song of solidarity for all people but especially for people in our society who are told that they’re not beautiful enough or they don’t have the right clothes or they don’t live in the right part of town. In our society it’s like you’re too skinny, you’re too fat, you’re too tall, you’re too short, your skin is to dry, your face isn’t clear enough. And we really wanted to write a song to say: be comfortable with who you are and be proud of who you are no matter the colour of your skin or whether you’re male or female or straight or gay. It’s really a song where we just want people to celebrate who they are and not who society tells them they have to be.

"We had been spending a lot of time in Los Angeles right before we wrote the song. I think there are a lot of misperceptions about LA. Like, people think about LA and they think everything’s false and fake. What I realise the more time I spend in LA is that there’s always – like any other place – really great, amazing people there; there are amazing communities there. You just have to find them. But there is that over-the-top, plastic culture in LA too. Being in and around music, you can find both.

“One thing that’s insane about LA is that there’s so much money there. In London, quite honestly, it’s very similar. But in LA, it’s almost different in a way that when you’re in recording studios, when you’re in that environment, people are coming through and coming and going all the time. We were just four working-class kids from Pittsburgh, we’d never really experienced being around a culture where money is in-your-face all the time. It’s the cars that people are driving, it’s the clothes they’re wearing, it’s the fashion that they’re into and the branding that they’re into. Somebody’s wearing a watch and you’re like, ‘Holy fuck, that watch is a $400,000 watch. Why does somebody have a $400,000 watch on?’

“I think we had just been inundated with that for a good couple of weeks, in our face. We were realising that being around that for an extended period of time was overwhelming. It made me feel suffocated, and I wanted to get away from it. And I remember having a conversation about that, like, ‘Wow, there’s a lot of cool stuff here and this is exciting and interesting, but it’s also all-encompassing in the shallowness of it.’ The artificiality of it is a little overwhelming.

READ THIS: 13 records to kickstart the revolution

“To be honest, we thought it was one of the coolest songs on the record [2006’s For Blood And Empire]. And we were a little afraid of it, to be perfectly honest. Because the thing about us is we’ve always been interested in all genres of music. I mean, we definitely are punk kids of Pittsburgh, that’s never going to change. There’s always going to be the punk rock stamp on our songs. Even when we push outside the genre, it’s always going to filter through the four of us, so it’s always going to have punk rock fingerprints on it. But we’ve always been interested in trying to push boundaries of what punk rock can be. So we felt like this was a really unorthodox song, especially from what our audience expected us to sound like. I remember we thought it was maybe the best song on the record, and we thought about releasing it first because we were really excited about it. But we were also like: if we release this first, it could alienate the audience from the rest of the record if they think that this is exactly what the whole thing is going to sound like. So we ended up releasing The Press Corpse first, which we were also really excited about. This Is The End came second as a result of that.”

Anti-Flag's new album 20/20 Vision is out January 17 via Spinefarm Records.

Here are some of the many, many bands for whom Rage Against The Machine blazed a trail…

Anti-Flag’s Chris#2 reveals why the band felt they needed to make a new album now more than ever.