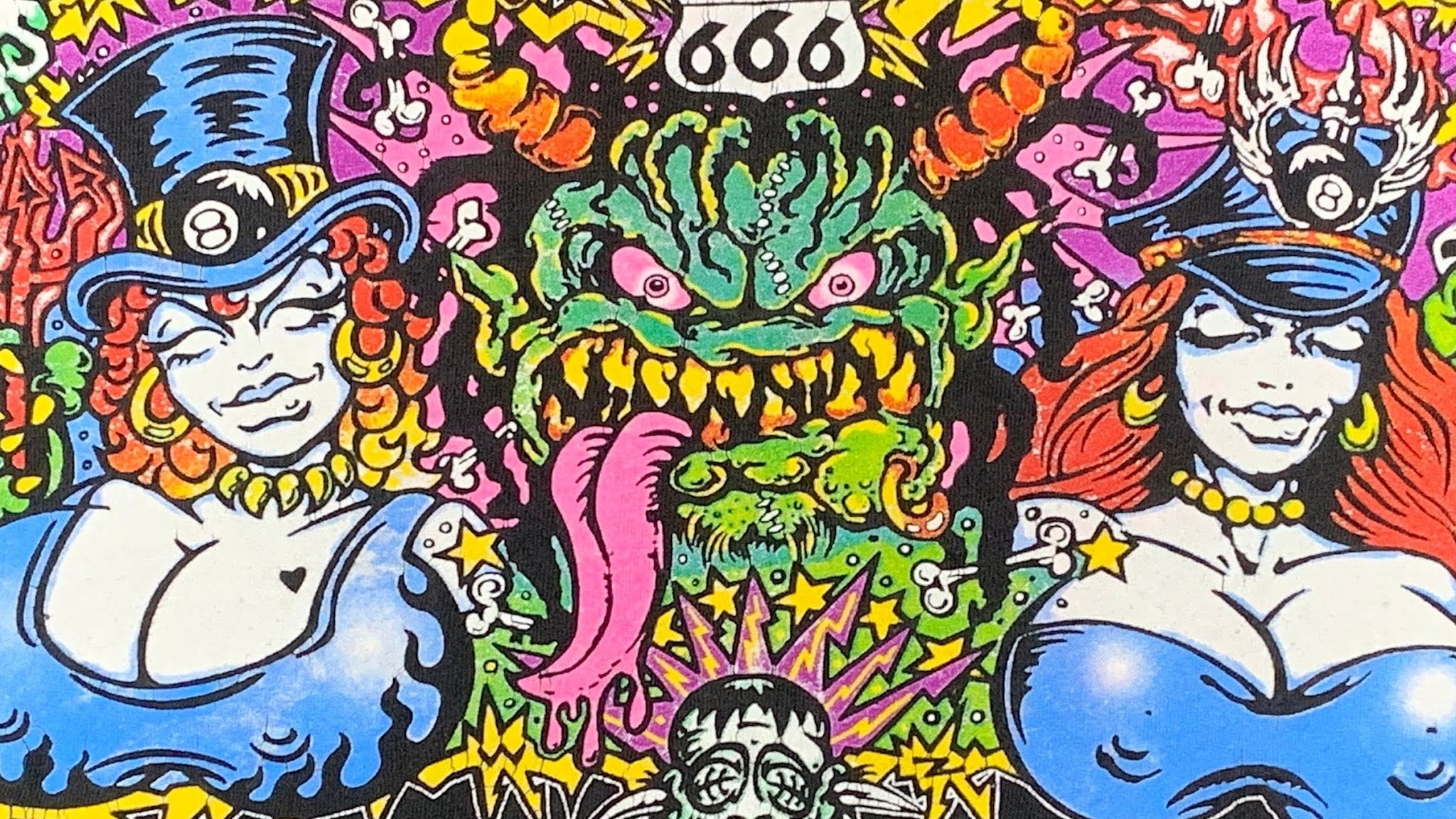 By 1992, ‘heavy metal’ had quickly become a dirty word. The genre’s image-obsessed mainstream identity was a ghastly shadow of the ground-level hunger that had once endeared it to the world, with former street urchins donning oversized blazers and singing glittery bullshit about girls half their age. Thrash had become long-winded, the satanic fury of yesteryear giving way to mid-paced seven-minute chug-alongs, while death metal felt to many listeners like hostile, unlistenable territory that only the sickest kids wanted to explore. Being a weirdo dirtbag who wanted to smoke some weed and go see a Vincent Price flick was, it seemed, a thing of the past.

But through it all came a shining neon light: La Sexorcisto: Devil Music Vol. 1, the third full-length album by White Zombie. With this record, the artsy New York noise rock band transformed into the muscular California highway metal crew that would change heavy music as the world knew it. Packing all the color and weirdness of alternative rock without the mopiness or weak guitars, La Sexorcisto reminded music fans that metal had no boundaries, and at its core would always be rad as fuck.

Though they formed as a weird, wonky noise rock project informed by New York City’s art scene, White Zombie were ready to transition into something bigger and louder. Much of the pressure came from frontman Rob Zombie, whose love of acts like KISS and Slayer was beginning to eclipse the circuitous experimentation of NYC art-rock.

READ THIS: The 15 best songs with 'fuck' in the title

“Rob pretty much wanted a straight-up metal record,” said Martin Bisi, head of BC Studios where White Zombie recorded their 1989 sophomore album Make Them Die Slowly. “Later, that’s what became apparent...After we recorded Rob’s voice, one thing that Bill [Laswell, producer] liked to do is run Rob’s voice through a little speaker. Like, literally if you took the speaker out of a car, a speaker where it’s maybe four inches in diameter. I saw [Rob] on the street and he was like, 'Oh, how’s it going in the studio?' And I was like, 'We’re taking your voice and we put a little speaker then Bill’s ramming his thumb and screwdrivers into the speaker.' You could see the pain in Rob’s face. It totally did not sound like the kind of record he wanted to make.”

But Rob wasn’t alone -- the change in direction had been a long time coming. Though their outfits were circus-colorful and their music was seasick and psychedelic, White Zombie’s grindhouse aesthetic had attracted New York’s metal and hardcore scene, earning them countless opening spots at Brooklyn’s infamous metal club L’Amours.

“Harley from the Cro-Mags walked up to us at two in the morning on St. Mark’s,” recounted White Zombie bassist Sean Yseult in a 2016 interview. “Rob and I were out flyering, and we saw Harley coming towards us. Normally, we’d just get out of the way, because we assumed he was coming to kick our asses for having long hair, but we were flyering so we couldn’t move. And he comes up and says, ‘Hey, I really dig you guys! You wanna play with us?’ And then we played with them, and it was amazing. We realized that there were people into what we were doing, we were just in the wrong neighborhood!”

The game officially changed when the band signed to Geffen Records, having attracted the label’s interest with their 1989 God Of Thunder EP featuring a cover of the KISS classic of that name. Armed with a ton of hype, a new direction, and at long last a record deal, White Zombie -- then featuring Rob, Sean, guitarist Jay Yeunger and drummer Ivan de Prume -- headed into New York’s infamous 321 Studios with producer Andy Wallace (better known for his work on Slayer’s Reign In Blood and Nirvana’s Nevermind).

For Rob, a self-professed workaholic who paid rent as a bike messenger during White Zombie’s early days, working on the record was a form vindication, a sense that he was finally making the album he’d always dreamed of. “I loved being in the studio,” said Rob in It Came From NYC, the book exploring White Zombie’s early noise rock days. “I couldn’t wait to get to work every day. It felt great to know you were making a real record, not just running in and out with whatever happening slapped onto tape.”

The result was unexpected for fans of White Zombie’s earlier experimental days. La Sexorcisto: Devil Music Vol. 1 featured 14 songs of brolic, electrifying biker metal, studded with exploitation cinema samples and screamable choruses. Opening with a bouncing, unhinged track titled Welcome To The Planet Motherfucker, the record takes off at a nitro-fueled pace, along the way indulging in all of heavy music’s most enjoyable flavors -- the epic riff-fed hard rock of Thunder Kiss ’65, the roadburned proto-metal of Black Sunshine (featuring an opening rant by none other than Iggy Pop), the crushing stoner-doom of I Am Legend and Warp Asylum, and the jangling lysergic ’70s sleaze of Starface and the incomparable Thrust!

Perhaps most impressive about La Sexorcisto was that it was a metal record so cool that it couldn’t be denied by those at rock’s new forefront. The generally accepted idea today is that grunge and alternative rock trumped metal in the ’90s because they were smart and emotionally aware, unlike, say, Whitesnake. But the people making that music loved old-school heavy music -- Kurt Cobain himself was famously a big fan of Swiss black-thrash pioneers Celtic Frost -- they just disliked the shallow, glittery presentation of the ’80s. But with its reverb-drenched riffs, ragtag aesthetic, neon colors, and old-school horror references, La Sexercisto was undeniably rad, and to deem oneself above it was the announce that you were a joyless ass who got into rock’n’roll for all the wrong reasons.

Of course, the first people to truly champion the album were a duo of TV morons. Beavis and Butthead had taken the world by storm with their snickering, scabby outlook on pop culture, and their commentary on music videos could make a band even as the characters ripped on them (neither Metallica nor Pantera escaped unscathed, with the two characters giving voice to the shit-talking that a lot of fans privately did about those acts). With the Thunder Kiss ‘65 video -- a psychedelic mixture of performance footage and Halloween monsters partying in the California desert -- the cartoon duo went all-in on supporting White Zombie’s double-feature look and insane sound.

“How come these guys are never on TV?” asked Butthead, asking what thousands of MTV viewers were wondering at home.

“They should play this video all day long,” responded Beavis.

Beavis and Butthead were expressing something that ’90s obsessives don’t like admitting (and it’s not just that most people were in the rock music game to score with Daria). Even as grunge and alt-rock introduced new levels of vulnerability and introspection to heavy music, people still wanted something powerful and fun, and being bummed out in a flannel shirt wasn’t very entertaining. But if there was one thing White Zombie were out to do, it was entertain, and with La Sexercisto they provided all the druggy, creepy, high-octane heavy metal that fans craved, even if they were too focused on looking disillusioned and thoughtful to admit it.

Today, this rings true more than ever. Modern-day music historians tend to look back on the ’90s as a time of emotional growth for rock, where the genre lost the glitz of the 1980s and focused on improving its soul. But even then, they can’t deny that White Zombie made one of exciting records of the era with La Sexercisto, bringing all the riffs and Frankenstein references for which most fans sidled up to the rock watering hole in the first place. It may have looked good on paper to be a mentally-crosshatched basket case in 1992, but the writing on the wall was that most people just wanted to hit the bong, load their van with shitheel friends, and blaze out to a drive-in horror flick like it was 1965.

READ THIS: Here's the origin of the moaning in White Zombie's More Human Than Human

From Guns N’ Roses to The Pretty Reckless, here are a dirty dozen of rock, punk and metal’s muckiest moments…