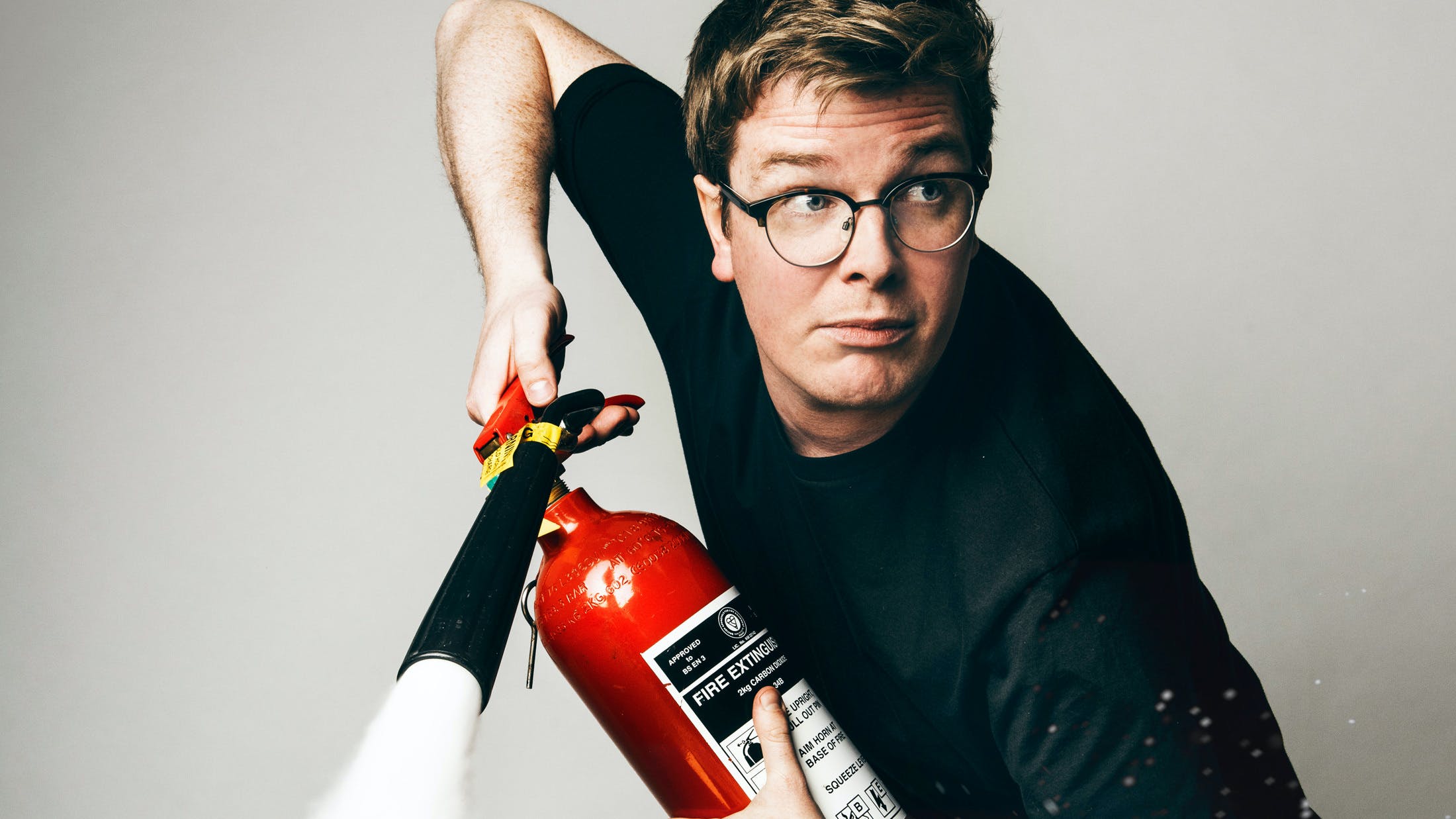 Just like Neo was given a choice of the red or blue pill, Kieran Boyd was offered a similar proposal: to take the green pill or not. Kieran was at Reading festival and gulped down the greenie, known as a Tripadvisor, before the losing the remainder of his Friday and the start of Saturday.

“One of the most vivid memories is being on a ride after dropping these pills, fighting harder than I’ve ever fought to hold down vomit because I was being spun in all directions at once,” he tells Kerrang! today from the comfort of a café in his local cinema because it has the best air-conditioning.

What followed was an evening of debauchery and depravity that involved members of Foals, Everything Everything, a lost passport and forgetting how time works. This story forms the backbone of Kieran’s latest stand-up show Crashing The Party, which just finished a month-long run at this year’s Edinburgh Fringe. And that’s because Reading isn’t just another excuse to get wasted for Kieran (although it also definitely is). He was booked to perform at that year’s festival with his sketch group WitTank, and after growing up attending the Bank Holiday post-GCSE piss-up, he didn’t want to screw it up.

“The first year I started going to Reading was in the year 2000 – it was a heavy, mainstream festival. Nu-metal was fashionable – it was actually popular,” recalls Kieran. “I know Reading is looked at now as a place for teenagers to go and get drunk, but over those years, what was popular chimed perfectly with what I actually love. Going to see Rage and Slipknot remains broadly acceptable, but Hed(PE) as well!”

Kieran’s introduction to alternative music came from The Prodigy around the age of ten, before discovering Nirvana and Rage Against The Machine, his tastes growing heavier and heavier until finding himself listening to Converge at university in “semi-secrecy because you can’t put any good music on if anyone else is in the room.”

These days, Kieran lists the likes of Thou, Conjurer, Daughters, Yob and Full Of Hell amongst his favourite bands – with plans to go see Inter Arma and At The Gates before the end of the year.

But street cred amongst metalheads wasn’t always part of the agenda. At school, Kieran “got pressured into playing guitar in a ska band.” This group of Capdown worshippers is another topic covered by his Edinburgh show, and the inherent non-coolness ska-punk exudes. However, it was through Kieran's friends around the band that he decided on his chosen career path – albeit from a different angle.

“Three kids from my school year started booking bands like Lightyear and Adequate Seven, so I’d get to open for those bands, when we were 15/16,” he says. “Adequate Seven would turn up in a van with not enough petrol money to get home and the only thing they had on their rider was vegan food. From that age I was like, ‘Oh shit, you can just pile into the van and do stuff if you want to!’ And that really appealed.”

Sadly the ska-punk dream died when the bassist was expelled. After going to Durham university and failing to claim a spot in the Durham Revue (run by fellow metalhead comedian Ed Gamble), Kieran soon found himself a part of WitTank, travelling the country like a proper rock’n’roll band.

READ THIS: Ed Gamble: Why I love heavy metal

“We were quite badly behaved,” he admits. “It was a hangover from when we did it as students, thinking you can just behave in a particular way. It was like we busked the exams. We turned up and we hadn’t done any revision but we still got good grades, so we got it into our heads that it was okay to do.”

After scoring what he deems an F at one particular Edinburgh Fringe, Kieran says it made the sketch trio realise they have to actually take their career properly. But, after nine years at the world’s biggest arts festival, Reading & Leeds came calling.

“I could not believe that Metallica were headlining this thing and right at the bottom of the poster, in the smallest font is WitTank in the comedy tent.

“It’s absolutely extraordinary when I look back on it. The problem was giving us the ticket for the whole weekend and booking us for the final day. It was a bender, basically. We knew we were going to have some fun and imbibe some substances, it was just how much that was going to affect our Sunday performance.”

The full, unabridged story of Reading is told throughout Crash The Party, which involves members going missing, losing technicians, and somehow ruining a band’s tour of China.

“It was fairly typical of some of the worst aspects of our behaviour, not taking care that we’re being good for the thing that mattered because we’re too busy having fun. I wouldn’t be able to do that now, I’d be dead if I tried to recreate what we did five years ago.

“I remember the sensation of being on that comedy tent stage. I think part of how dishevelled we were probably helped because it wasn’t building up too much. I was stressed about the state of the others. What I hadn’t given any thought to was the amount of people behind the curtain. I think if I thought about that I’d have shat my pants.”

Performing at a huge rock festival like Reading is undoubtedly one of the best things a fan of heavy music can do. This year Kieran attended Download festival with his friend Ed Gamble who was performing in the comedy tent, telling Kerrang! that the audience were quite literally baying for blood after ‘the diabeast’ Ed started to discuss his blood glucose levels. Pretty metal, right?

But what is Kieran’s most metal moment?

“We had a sketch where I was dressed as a priest and would whack out an electric guitar, and this big Hendrix riff would crack in,” he says with tinge of pride. “I was miming unfortunately, I wanted to do a live guitar... I’m so un-metal really, I’m properly undercover.

“When I left uni I didn’t know anyone who liked metal any more so I very consciously started listening to other stuff. For 2-3 years I was trying to wean myself onto jazz and folk, I didn’t mind some of it, but really I knew what I liked.”

After an epiphany in 2014 at a Mastodon show, Kieran threw himself back in to the metal scene, describing last year in particular as his favourite ever year for heavy music.

Declaring his love for true outsider fest Roadburn, is there something in particular that attracts Kieran to the weirder side of metal? Is it something to do with comedians in general?

“Stewart Lee talks about The Fall and Frank Sidebottom all the time,” he begins, pondering the question. “I think it’s a common thing of being into esoteric or unconventional music, I don’t want to use the word challenging as it makes me sound like an arch wanker, but something that isn’t necessarily in 4/4 and on the radio all the time.

“I used to liken it to having a disease – in my mind it’s not up to you if you like metal or not, you just do. If I could choose I’d be into something much more fashionable but unfortunately it’s terminal and I’m stuck with it.”