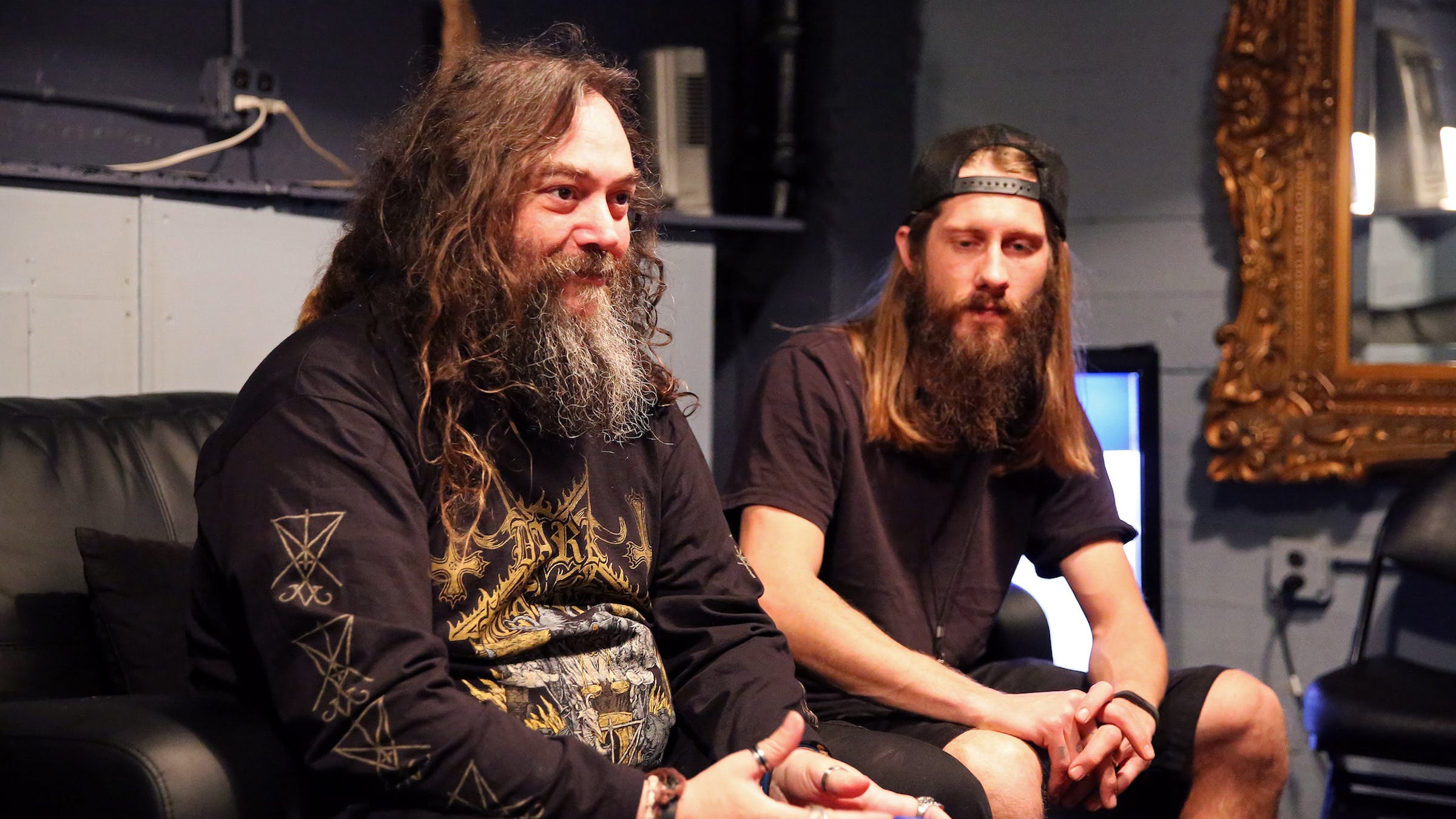 Maybe the most fascinating thing about seeing Max and Richie Cavalera together is how much they smile. Not because they’re members of two of metal’s most furious bands on the planet -- Max is of course frontman for the aggressive Soulfly and the former leader of Brazilian thrashers Sepultura, while Richie sings and plays guitar in crushing American metal act Incite -- but because they’re related. For many, spending over a month and change on the road with their family may sound like some sort of punishment described in Dante’s Inferno. But the Cavaleras have made it a point to keep family close, even during the grueling undertaking that is a heavy metal tour.

“We’ve been doing it for so long, it’s a natural thing,” says Max, perched at the edge of a couch backstage at the Gramercy Theater before the New York City stop on Soulfly’s U.S. tour. “It’s second nature. I’ve worked with Gloria [Cavalera, Max’s wife and Richie’s mother] forever, and she’s always on tour. Now we have Zyon [Cavalera, Max’s other son] on drums, and even when Richie’s not touring with us with Incite, he’s doing merch.”

The Cavalera’s attitudes are almost the opposite of how one might imagine them -- Max, the metal veteran, beams excitedly and wears a long-sleeve Dark Funeral shirt, while Richie, the up-and-comer nods along with the chill regard of a road lifer. It’s as though being around each other has given the guys each a spark of necessary inspiration. Through Richie, Max can feel the excitement of touring from the point of view of a young band coming into their own. Meanwhile, Richie has taken from Max and sense of laid-back versatility, the sense of pace that comes from being ready for anything and having seen it all.

“It’s really cool to have Max and Gloria on tour, but then Mom and Dad at home,” Richie explains. “There’s a total separation of tour and family. And then, when we’re not touring with them for so long, it’s good to see them all the time. So often [Incite] are doing our own tours, and Max is doing his own thing, so to come together and see them is always a welcome thing.”

It’s cool that touring with your family comes so naturally to you -- usually, there’s this cliche of leaving the family behind so you can party.

Do you ever give each other performance notes after a show?

M: Not really. We let each other do our thing. Which I think is the best way.

RICHIE CAVALERA: I find us doing is much more complimenting one another. Things like, ‘Pop, great job tonight, kicking ass. How’s the voice holding up tonight? Mine’s crispy.’

R: It’s a fun thing, because it’s something we both go through. But we try to let each other just rock out.

M: Richie grew up on the road with us a lot, and he absorbed a lot of it, and put it to work for him. Incite is really his thing. So I think it’d be uncomfortable for me to tell him, ‘I think you should do this or that.’ It’s not even my place. And I think that’s best, because music is supposed to be something you explore on your own. You figure it out and you make mistakes and fuck-ups, but you do great things. Any great thing is not born without a fuck-up. He has to experience it himself, and he has. The thing I’m most proud of is how he carries himself. From professionalism, to doing shows when you’re sick and tired, always giving it 1000%...that’s the way it should be. And I think that’s a great attitude that he has. R: I had a good teacher to learn from, that’s for sure.

Max, was there ever a moment where you saw Incite come into their own, and realized Richie’s band was really taking things to a new level?

M: Little by little all the time, but right now, they’re probably their best. I think the new album is amazing. From time to time, I’ll jam with them, when I’m not playing. And part of his great attitude is finding the right players to perform with him. And that’s good for everyone -- if he steps up and does a great job, it puts pressure on us to step up and do a great job. It makes everybody better.

Is there a downside to touring with the family?

R: You sometimes fade a little bit with siblings back at home, is the downside. But the ones that are out here, the Zyons, Igors and Jasons, you see more. Unfortunately, you can’t be there for all of them, and that sucks a lot. They take a beating for us not being there.

M: I mean, we have a big family. We can’t have everybody on tour. We tried it once -- we brought everybody, and it was insane. But you can’t do that all the time. So we take turns. We try to spend a little bit of time with all of them, as much as we can. When I get home, I immediately want to go hiking with my other son Igorr, or Jason comes over. Roxanne has the grandkids, so they come over. They’re big football freaks, so we connect through that. They’re all NY Giants fans, which sucks. My family in Brazil is big, and my family here is big. I love it.

Richie, obviously you’re American, but Max will always be associates with Brazil. How much Brazilian culture were you surrounded by as a kid?

R: A LOT, man. From six years old to at least thirteen. I was constantly around Brazilian dudes. Sepultura was Brazilian, the whole crew was Brazilian. The only thing they taught me to say in Portugese were cuss words, which was funny, a little kid going around speaking Brazilian cuss words. But going there as often as we do, it’s great. The food, the vibe of Brazil, it’s incredible. It’s something it took me a while to understand, and as I got older, I realized how much they have to offer, man.

M: I remember one time, on a family vacation, we went to the rainforest. That was one of the coolest vacations we ever had. We had a cabin in the jungle with no electricity. And one night, we went out in a boat and went alligator hunting. It was fucking crazy.

R: We were in a boat with this dude Armando with nothing but this big knife and that was it. I was ten years old, and I was just freaking out, man -- there were crocodiles swimming under the boat, rocking this canoe back and forth. It was one of the craziest things ever.

M: His brother Dana wanted to bring a monkey back to America, and we had to talk him out of it. ‘You can’t do that, man! They won’t let you!’ To me, it’s cool, I get to go there once a year. Sometimes, it’s with Soulfly, and sometimes it’s with my brother. And I still have family there--my mom’s still there, I have aunts there, all that. The entirety of South America really appreciates what I do for metal, so we’re always well-received.

It feels like the Cavalera name has become synonymous with a good family vibe in metal. When we did our Arizona profile, all of the guys in Gatecreeper talked about how cool the Caveleras have been to them.

M: Of course, man. I love that those guys can come hang out. I was on tour once, and they were all in our jacuzzi. Igorr was doing Facetime with us -- Gatecreeper and Genoicide Pact hanging out in our hot tub and eating guacamole on the roof of the car!

That’s a weird message to get on tour!

M: One of the funniest moments of my life was when we got the call about Danny Marino. You know him--the guy who punched Danzig. Gloria called me at 4 in the morning, in Europe, and she says, “I just got a call from Danny -- he just punched Danzig.” And the next day, it was all over the Internet. And it’s really funny, because Danny is a really nice guy. But he got fucked with, at the wrong place, at the wrong time.

You guys play metal that really whips a crowd into a frenzy. Are there cities on a tour like this that might have crazier crowds than most fans would expect?

R: Albuquerque, New Mexico. That’s one of my favorite places to play, man. You’ll see ‘em in a huge line, which you don’t really see in most places. They’re there early. They want to get pictures taken, the whole thing.

M: A lot of Natives, too. A lot of Navajo come out. For me, I really like the small places -- Kentucky, Wyoming, in the middle of nowhere, where you play to 200 people, but they’re all really appreciative that you’re there. I remember going to Thunder Bay, in Canada, and everyone who came out lost their minds on the show. It was one of the coolest shows ever.

On the other side of the spectrum, are there certain stops on a tour that you can commiserate over?

M: The New York show is always hard. It’s the New York, the LA, and the Phoenix show. Once those are out of the way, it’s done.

R: Dude, it sucks to park a van here.