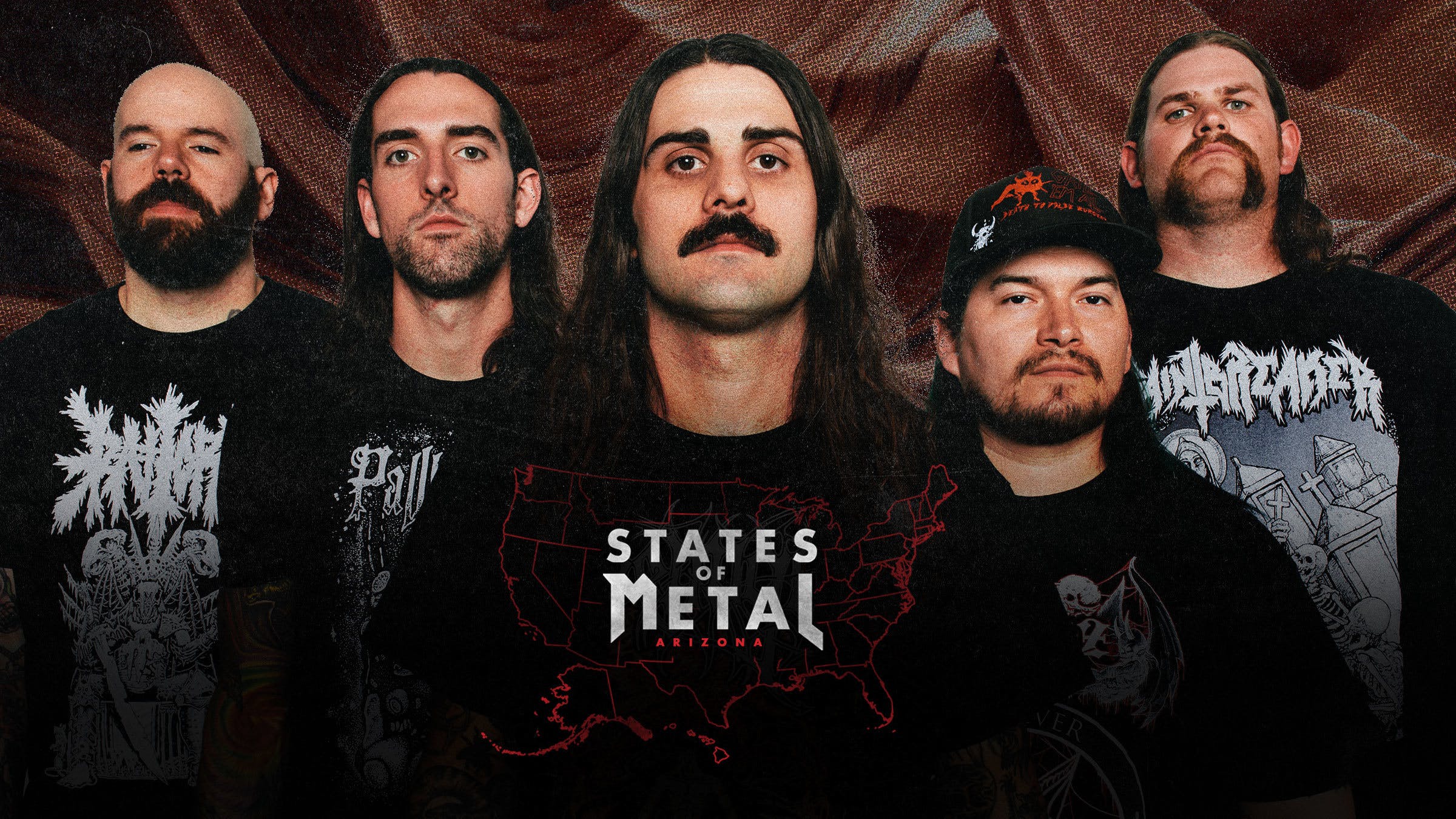 And while you’re reading, listen along to our States Of Metal playlist, featuring killer tracks from each state we feature. Scroll through to listen to music from Arizona and all of the states we’ve profiled in the past:

Arizona is fucking brutal. Though its vast deserts contain beautiful rock formations, including the monumental Grand Canyon, the 48th state to enter the union is primarily known for steer skull-strewn wastelands and temperatures over 110* Fahrenheit in the summer. And while Phoenix and Tucson are seen by many typical Americans as rugged alternatives to California, with their warm winters and ample room for hiking and golfing, these cities exist at odds with their surroundings, surviving on constant air conditioning and water that has to be brought in from other states.

But what this hostile environment creates and attracts is terrific metal. Fueled by living in a landscape out of a sci-fi novel with temperatures that rival those of Hell itself, and fostered by marginalized groups living in a largely conservative area, Arizona’s metal scene is not only creatively fertile, but also pure in its appreciation of heaviness.

“For me, Arizona has always been one of the most metal states in America,” says Jose Mangin, host and curator of SiriusXM’s Liquid Metal station. Born in Phoenix, Jose is one of America’s most recognizable metalheads and hard rock ambassadors, which he directly attributes to growing up in Douglas, Arizona, a few miles from the Mexican border. “I know that because I’m a fan. It’s the fans that make it so metal -- especially the Latinos and the Native [people]. It’s all those people coming together, because they’re all these passionate groups of metalheads who most people aren't speaking directly to. I think where there’s populations that are mostly poor, you'll find metal -- Phoenix and Tucson have a lot of money, but a lot of poverty, but where I grew up it was super poor."

According to Jose, Douglas’ small-town boredom and diverse population bred a thriving metal scene in the ‘80s -- ”The entire town was into either super-traditional Norteño music, or metal” -- that has continued to thrive throughout the state’s history. But he’s also quick to add that Arizona’s surroundings, and its heritage, made it all possible.

“The heat just makes you PISSED,” he says. “But it’s also the land, dude. It’s Native American and Mexican land, and in our DNA, we have metal. I think it even goes back to some Pet Semetery burial ground shit. There’s no beach, or water, or clean vibes -- it’s concrete, boulders, tumbleweeds, the fucking sun, and not a lot to do. And that gets into the people.”

“There is a certain type of sun-baked tweaker metalhead that you just can't find anywhere else,” says Chase Mason, lead singer of Tucson-based death metallers Gatecreeper. Originally from Mesa, Chase was a skate punk whose distaste for mainstream nu-metal led him to extreme bands like Slayer. Today, Gatecreeper is Arizona’s most identifiable underground band, channeling the state's sweaty grossness in a way that Chase compares to the formation of other extreme bands from merciless locales. “I would say it's similar to Norway's climate informing black metal. In the summer, when it’s 120* outside, you have no choice but to stay indoors and that's when you have to entertain yourself! The extreme climates can force you into isolation or uncomfortable situations where your only escape is to be creative.”

While Pheonix is the state capital, Chase claims Tucson, home of University Of Arizona, is a little more quintessential. “I think Tucson has much more of a 'desert' vibe than Phoenix,” he says. “They both are ultimately the same climate-wise, but in Tucson they don't try to hide it. In Phoenix, people will try to make things green with front lawns or non-native plants, but in Tucson they seem to keep it brown and natural. I respect that vibe.”

“Tucson is less full of shit,” adds Nate Garrett, guitarist of Gatecreeper and frontman for epic doom metal act Spirit Adrift. Originally from the American south (he was featured in our States Of Metal: Arkansas profile), Nate planned to spend eight months in Arizona as a “stopover”, and has now lived there for almost a decade. “It has way more character in both directions. It’s a lot more of a college town, and being at metal shows, people are more down to fuck shit up. But motherfuckers get stabbed and shot and stuff at Tucson all the time."

Another danger Nate brings up is that of unsustainability. Phoenix plays at being a typical big city, but the harshness of its surroundings means that the resources many other large cities enjoy simply don't exist there. And as the environment suffers more and more in the future, the future of desert cities like Phoenix is in jeopardy.

“If the climate change consequences are as dire as people are saying, this is going to be one of the first places on earth that cannot be inhabited by humans,” says Nate. “If you own a building here, it is illegal -- against the law -- to not provide air conditioning. Because if you didn't have AC in the summer, you would just die.”

But in Nate’s mind, that hostile environment toughens up Arizona's residents in a way that headbangers from other cities could learn from.

“You have to have a certain kind of toughness to live here,” says Nate. “Growing up in the South, I’m used to people who can overcome certain things -- oppression, both from society and the elements. When we started touring a lot, I realized the REALNESS of this place. You can’t be a pussy and live in the desert.”

Like that of many big American states, Arizona’s metal scene truly boomed until the 1980s, when the state’s wide-open spaces, unbearable heat, and streamlined suburban conservatism drove its youth and outcasts to make their own big, loud fun. Thrash acts like Sacred Reich and Flotsam And Jetsam (featuring Jason Newsted, who’d later go on to play bass for Metallica) tossed a match of excitement on the tinder of the state’s bored, disenfranchised youth, and the blaze quickly raged out of control.

“My mother started the first all-ages rock/metal bar in Arizona called The Bootlegger,” says Richie Cavalera, Arizona native and lead singer of Phoenix thrash metallers Incite. Though most people know Richie’s name because of his dad, Sepultura and Soulfly frontman Max Cavalera, he’s quick to lead with his mother Gloria’s contributions to Arizona’s burgeoning metal underground in metal’s heyday. “She had regulars like Rob Halford, and bands like Poison were coming to this place regularly before they broke out. Bars like the Mason Jar that were world-famous; I saw Sick Of It All cause a riot there. But they eventually shut the Bootlegger down because it was too rowdy -- the state is very conservative.”

For many Americans, that’s also a defining characteristic of Arizona -- it’s a big red state, politically as well as literally. And while Nate and Chase from Gatecreeper claim it’s no longer really like that, Richie notes that Phoenix’s police presence is as much an inspiration for the city’s heavy metal outlaw culture as the heat is.

“it feels like a police state,” says Richie. “There’s this feeling of lockdown. Because there’s not a lot to do other than drinking, drugs, and music. So for a youth growing up, you feel rebellious against that. There’s a cop on every corner, and they’re always trying to fuck with you. It builds a rage against the system, against life. The outlaw thing stems from people like Sheriff Joe [Arpaio, racist cop and Trump shill], a very old population who just want to be left alone and live a conservative lifestyle. It’s started to change, but there’s still a real police presence.”

Another factor that helped foster Arizona’s healthy diehard metal culture is KUPD, Phoenix’s rock radio station. For the past 40 years, KUPD has remained an “active rock” station, promoting hard rock and heavy metal for generations of fans (“I modeled my early SiriusXM playlists after them,” says Jose Mangin). According to program director Larry McFeelie, the strong local appreciation for metal in Arizona can be traced back to the state’s Western roots--and that the old-school attitude allows for an appreciation of music that hipper regions have cast aside.

“One thing to be said about Arizona -- it really is the last of the ‘Ol’ Wild West,’” says Larry. “It has always felt like rock and metal seem to perform better here than anywhere else. In Arizona, somehow there’s a place for genres or bands that have already burned out to continue. Hair metal headbangers are welcome!” But Larry also makes it clear that he's heard every dumb stereotype about the region. “People see the entire state as a desert with every major city looking like something out of an old spaghetti western. It wasn’t even like that when I was a kid growing up here. Sometimes when I tell people I’m from Arizona, they ask if I know how to ride a horse?”

“The cowboy influence is there,” says Sean Mears, bassist for Gatecreeper and vocalist for vicious Tucson grindcore act Languish. “We might not exactly believe in what [people from the Old West] believe, but we’re still really into all the imagery -- the skulls, the big open desert, the fact that you can go out there and get killed by a number of plants or bugs, or get lost. I think all of that plays into our music, and I know our drummer Zack [Hansen] really thinks about that when writing a part that he wants to attack people with: his surroundings.”

But the more Arizona's landscape changes, the harder its dedication to heavy music becoems. The scene in the Grand Canyon State is ever-changing and always excited; even the guys from newer bands like Incite and Gatecreeper are quick to cite the lesser-known acts from the area they love, like black thrashers Bloodlust, death metallers Woundvac, and ethereal doom metal act Holy Fawn. Meanwhile, the more recognizable faces from the state continue to rep its headbanger culture, and are now finally in a position to give back to it.

“I’m going to start my own festival in Arizona,” gushes Jose Mangin excitedly. “It's going to be on a Native reservation. It’s going to focus on metal, and on Latino and Native American culture. Why in Arizona? Because it’s an underserved heavy metal epicenter, and those dudes want something in their own state. They crave it and love it PASSIONATELY, and right now, there’s no one speaking to them. I mean, fucking craft beer and metal fest? Dude, Latinos don’t drink craft beer! They drink tequila and cerveza! It’s fucking hot here!”