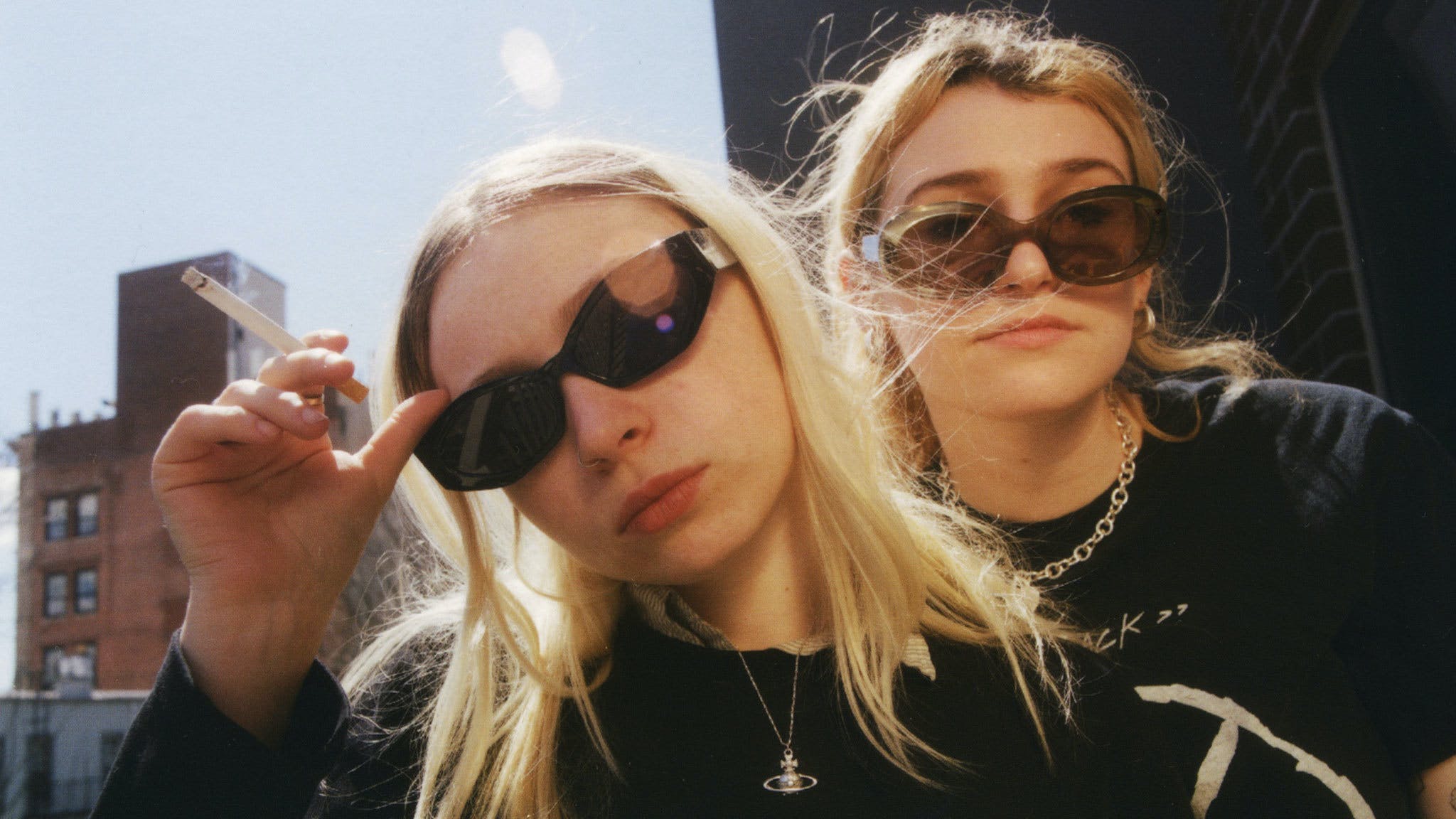 Etta Friedman used to feel like they were living two different lives. One of them was spent in art school, the other making music with their bandmate Allegra Weingarten, with whom they formed Momma back when they were in high school. The bulk of their activities as a band were often confined to their summer breaks, meaning their first two albums, 2018’s Interloper and 2020’s Two of Me were put together in short windows.

Although Allegra had already graduated at this point, the arrival of COVID-19 upon American shores happened while Etta was still studying. Despite the disruption it caused to their education, however, it cleared space in their life to put more time and energy into making music. The product of this dedicated creative time was their third record, Household Name. “It was honestly a blessing because we were now able to focus more on what we’re actually super dedicated to,” they recall. “The process was super different. We’ve had a lot of time to sit on the songs and record and demo and stuff. This was the record where I feel like we actually sound like we’re meant to sound.”

“We’ve been a band for a very long time,” adds Allegra (seven years, to be precise). “We’ve finely honed our songwriting craft after years and years of not being very good.”

The New York-via-LA alt.rock duo got to see first-hand that pandemics can have their silver linings – not only did they sign with Lucky Number at the peak of the outbreak, but when things began to settle, they finally got to graduate from GarageBand to a real studio. It gave them the means to shift their sonic dreams into reality. “We’d just had this idea of [making] something that’s loud and spacious for so long, and it finally happened,” enthuses Etta.

Even though their output is shinier and more expansive, however, they didn’t fully abandon the DIY approach that had carried them up until this point. Everything on Household Name was written and demoed alongside their producer and touring bassist Aron Kobayashi Rich in his bedroom. “It’s kind of something we’ve done since the beginning of time with Momma,” explains Allegra. Its impact on Household Name’s sound is immediate – while it has all the slickness of high-tech studio production, it also has the same feeling of cosiness and warmth that comes with sitting in a bedroom amongst cushions and blankets.

It's no surprise, then, that Etta and Allegra had the rock star life on their minds as they were making Household Name, now in a position where they could start imagining bigger for themselves and their band. During lockdown, they’d been immersed in media that was interested in the idea of the rock star – Tenacious D In The Pick Of Destiny, Montage Of Heck, Josie And The Pussycats. “I feel like we’d been living vicariously through that media,” says Allegra. “I still do. We felt it was time to create our own.”

“I also think we were super intrigued with the idea that Nirvana’s Nevermind completely changed culture overnight,” says Etta. “Once it was released, they were then the biggest thing in the whole world. How does that happen to a band? We were thinking about how insane that shit is.”

This train of thought manifests itself with a humorous touch on Rockstar, a track that, unconsciously or not, most closely resembles the sounds of Etta and Allegra’s idols, over the top of which they poke fun at the overinflated ego of that guy in a band who thinks he’s God’s gift – 'It takes a lot to admit it / Takes a lot to admit it / Yeah, I got what they want, I’m a real rock star,' they purr in unison. They share anecdotes of fictional former bandmates – a made-up drummer who quit their made-up band, a former singer with an alcohol problem who sings Rocketman on karaoke. “We don’t take ourselves very seriously, in real life or in songwriting,” Allegra asserts. “It’s just natural for us. We like to poke fun at ourselves and the world.”

It’s satire, but it’s also homage. After all, how well can you parody something if you don’t know it inside? “The Breeders are my favourite band ever,” says Etta, “and when Kim Deal was on her last reunion tour with Pixies, she wrote a song directly related to the band called Walk It Off. It’s so fun and tongue-in-cheek, how she refers to these characters like the drummer, the singer. I think that’s a fun way to talk about being in a band and our experience in general with that.”

That said, the rock star figure they speak about, they believe, is a relic of a bygone era. They’re looking towards the past rather than imagining it being their present or future. “The rock star doesn’t exist anymore in the traditional sense,” Etta reasons. “You don’t see rock stars in the tabloids or people giving a shit so much about that. Oasis vs. Blur, Stones vs. the Beatles… nobody really does that [anymore]. Society has progressed and it’s definitely created safer spaces in certain senses, but you have to be more polite all the time. You have to watch yourself I think as a musician now, if you want to get places.”

Those rock stars were also more capable of paying their bills without the need to work a second job on the side. If there’s any part of the rock star life Etta and Allegra want, it’s that. “You could not think of more separate work schedules than mine and Allegra’s,” admits Etta. They work in a cheese shop, while Allegra waitresses. “Getting together to do anything is so hard. It’s so frustrating. Making this a sustainable career is what I want.”

With any luck, Household Name will move them ever closer to that point.

Household Name is out now via Lucky Number

Momma announce new album, Household Name, looking at “the rise and fall of the rock star”