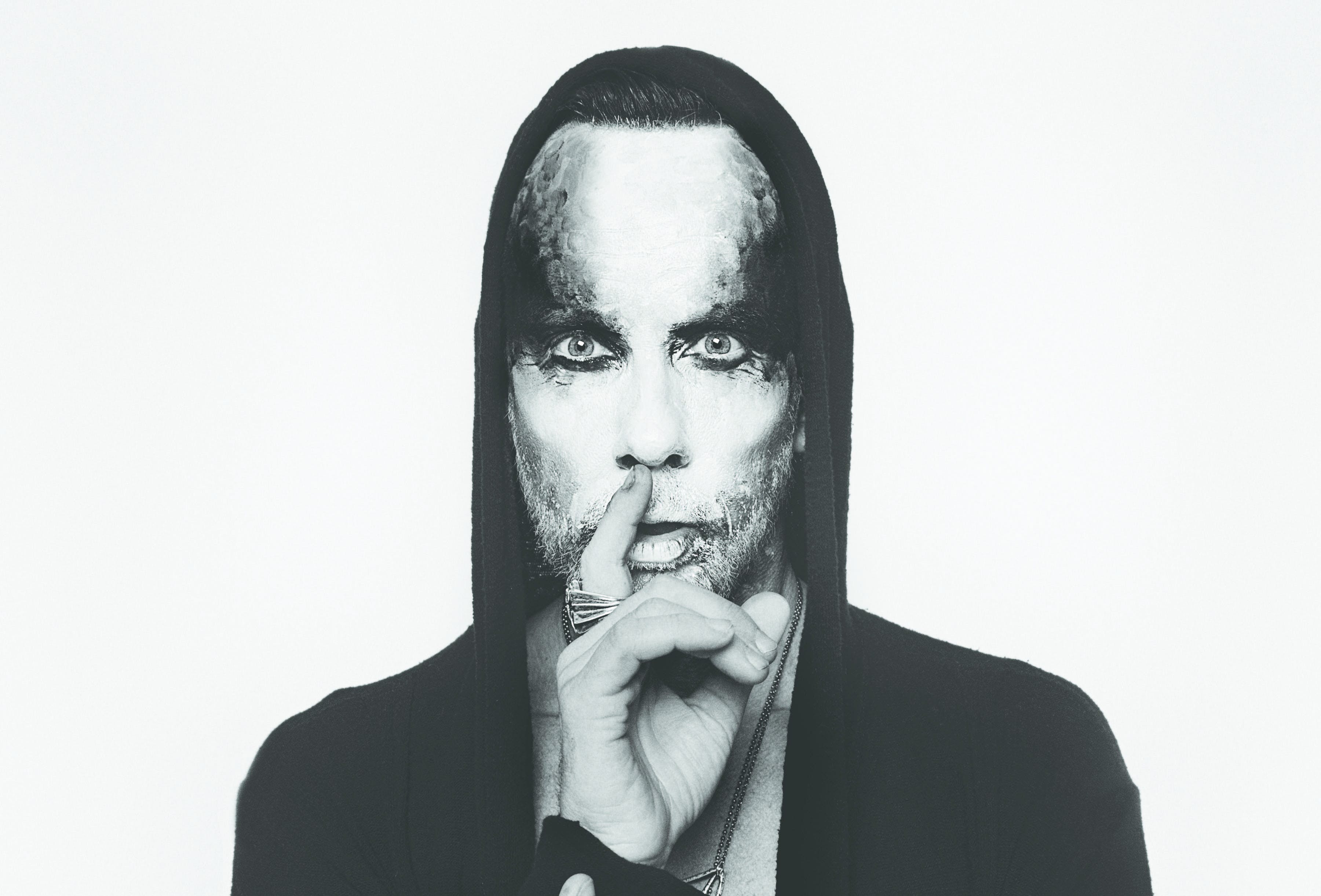 Adam ‘Nergal’ Darski is getting ready for a night on the town. It’s a chill early-spring Saturday evening in Warsaw and convention dictates a night of “meeting friends, flirting with girls and rocking like motherfuckers”. He’s already braced for tomorrow morning’s hellish hangover. Chatting as dusk settles, the extreme metal figurehead speaks with the relaxed clarity of a man ready to get some things off his chest.

Onstage, we’ve grown accustomed to the black-metal maverick; the firebrand; the blasphemer. Off it, we’ve come to know the intelligent, urbane, infinitely-cordial individual; the philosopher; the entrepreneur; the renaissance man. Twenty-seven years since Behemoth’s first rumblings behind a collapsing Iron Curtain, and almost 41 into his tumultuous time on this earth, Nergal simply sees himself wringing every idea and opportunity for its fullest potential to best use the time he’s got. The clock is always ticking and there’s not a second to be wasted.

2010’s battle with Leukaemia hangs prominently in the background. It’s an experience that still informs his sense of urgency. A year on from the release of Me And That Man’s blackened-blues debut Songs Of Love And Death, and four since the release of Behemoth’s The Satanist, the gears are already shifting on new artistic output. Commercial and creative opportunities – from energy drink sponsorships to his growing empire of barbershops and nightspots, to TV appearances like his stint as a judge on Poland’s The Voice – are carefully considered. And that continued controversy bubbling in his conservative, Catholic homeland (his most recent court appearance revolving around a T-shirt ‘disrespecting’ his country’s coat of arms) is shrugged off with a sense of clear-eyed perspective.

“I’d like to be adored by adults who understand my art,” he grins, knowingly. “But there’s absolutely nothing wrong with being hated by the ones who don’t…”

Satan is all well and good, but do you ever feel the need to lyrically lighten up?

“It feels like that Luciferian, Promethean [identity] is in my DNA. I can try to reject that. But, as the Greeks say: ‘Know thyself!’ I would rather die than deny my nature. [My creativity comes from that same place as poets John] Milton and [Percy Bysshe] Shelley, [occultist Aleister] Crowley, [poet] William Blake and the Bible itself.”

Which formative moment set you on the way down this path?

“I will always remember my little tipsy father coming back from work with an acoustic guitar when I was seven or eight. I still don’t know where the fuck he got it. He was probably playing cards with some drunken friends and won it. As soon as I saw it, I was sold to the Devil! That was the moment I signed my pact…”

You grew up in Catholic Poland. When did your relationship with religion turn?

“There are three sacraments growing up in the Catholic church. The first is baptism, just after you’re born. They put some holy water over your head and all of a sudden you’re part of a church. The second is communion, age eight or nine. Coming up to the third [confirmation] aged 14 or 15, I’d already started questioning things. The inner-voice was asking, ‘Is this you?’ and the answer was, ‘No, it’s not…’ Metal was a catalyst to that rebellion. I was beginning to move towards the unknown…”

Which bands, specifically, sparked that rebellion in you?

“Blasphemy, Venom and Bathory. Samael’s Into The Pentagram was a huge song here in Poland. They were the bands where I could really understand the lyrics and imagery. I was a massive Tiamat fan, too, and when Johan Edlund would sing, ‘I turn to you and say, “I worship Lucifer”’ [on The Scapegoat], his was the voice of enlightenment and the voice of truth. That was 26 years ago and it’s never really changed.”

Could you conceivably have followed any other path?

“It would need to be something that would offer a way to express myself. When I was a kid, before I even grabbed a guitar, I was into drawing and painting. My mother could barely drag me away from my notebook. Apparently I had some talent – I’d always get the best marks in school, and I remember a discussion that my parents might send me to art school. I’ve actually been working on some new artistic installations in the past few years…”

What impact did landing that early record deal with Tomasz Krajewski and Pagan Records have?

“In the early-‘90s, releasing a CD was an expensive process. With the inflation in Poland’s early democracy – no exaggeration – the average monthly wage would buy you maybe only three or four CDs. They were luxury products. For 16 or 17-year-old kids living in a block of flats with our parents and no money because we were at school, it meant the universe. It was a game-changer!”

You still went into education, though…

“I had decided to quit education, and then I had a wake-up call. I was 18 or 19 and I was busy, but the band wouldn’t pay my bills. I was already living on my own, I had my own shitty Polish car, and I was just about to get my first cell phone. I was broke as fuck. My parents were happy to support me – while I was still in full-time education…”

You finished, qualifying to be a museum curator, too, right?

“When the band became strong enough to support me, of course I could’ve quit, but when I start something I like to finish. If I play side A, I play side B…”

Isn’t educating yourself part and parcel of that refusal to blindly follow?

“I prescribe to [Calvin Coolidge’s philosophy], ‘The world is full of educated derelicts.’ I felt that joining the university community would help expand the potential of my brain. I like the duality of being that absolute savage onstage, splattered in blood, blaspheming, making occult symbols, and on the other hand, I have a diploma and I can put a sentence together. That’s why I called my book Sacrum Profanum [The Sacred And The Profane].”

Do you ever actually intend to practice asa museum curator?

“Never (laughs)! That’s not my energy. I love to read and to see stuff, but do I want to be in there covered in dust? No, I’m born to do things using my weapons, my energy and my ADHD.”

Those attributes are better suited to running barbershops, nightspots and – most impressively – acting as a judge on Poland’s The Voice, right?

“I did The Voice to satisfy my curiosity. I wanted to see the TV world. I wanted to face that beast, to see if it was cool or not. And when I was doing it, I was digging it. I was transparent about the money, too. When I came out of hospital, I was in debt. The band wasn’t making money. I had to pay medical bills. I needed money and I did it to survive. But there’s nothing wrong with combining business and pleasure.”

What do you say to naysayers who claim pop contests and men’s grooming ‘aren’t metal’?

“I’ve never read the rulebook that says what the metal icon is supposed to do. I really hope that book doesn’t exist. Before I’m a metalhead, a musician, anything, I am myself – Adam Nergal Darski. If you have a problem with that, you have a problem with yourself. One of the fundamental teachings of Satanism is, ‘Do what thou wilt shall be the whole of the Law…’ It’s about freedom to explore your potential in any way that you want!”

In a way, you were actually dragging metal into the field of view of a larger audience…

“There is no bigger ‘fuck you’ than to get out of your cave and throw extreme metal in the face of the mainstream. Maybe they choke on the sacrilegious, blasphemous chaos; maybe they devour it. Either way, that’s how you unleash chaos on narrow minds. My choices on The Voice were the contestants singing Metallica and Nirvana. I even had this seven-months pregnant lady singing Run To The Hills – and she nailed it.”

A degree of celebrity accompanied that role. Do you still feel that appealed to your ‘performer spirit’?

“It didn’t change me in any way. It just reminded me there is this other world I’m not a part of. Maybe they thought they could civilise this animal. I have no problem going into that nest of wasps. If you have a strong core, you can never lose credibility.”

Does that philosophy extend to your energy drink sponsorship?

“I got offered a shitload of money to [represent] Demon Energy drinks and I accepted that cheque. A month later they stopped distributing it because a massive part of the Catholic community in Poland boycotted the parent company as long as they kept working with this ‘devil’. I kept the money and I was laughing.”

Do you still regard those boycotts, protests and court cases against your art as ‘a tax on freedom’?

“The stage is my temple. I am the priest; I run my mass by my rules. You’re not welcome if you don’t agree to those rules. It’s a stage, it’s art, and it’s a theatre. It may offend. It may be too much for you. My line in the sand in court was that this is my art in my space. It’s not like I’m ever going to throw a grenade into a church. I don’t want to interfere in other people’s freedoms to believe in and worship whatever they want in whatever way they want. That’s your temple. This is mine. Deal with it.”

What’s at the root of your fixation on those damned ‘anti-heroes’?

“I see no logic in choosing the angels’ side or the gods’ side. I see no logic in identifying my fallen nature with the deities who are so faultless. I’d rather identify with someone who represents my imperfection. Of course it’s all metaphorical anyway – I don’t believe in anthropomorphic deities. I use them for aesthetic reasons. Christianity found scapegoats, but I think that’s a misinterpretation. For me, those characters can be uplifting.”

How important was retaining that value-system during your battle with leukaemia?

“I felt that there were all these voices saying, ‘Now he’s going to pray to God…’ That’s often what happens to people who have near-death experiences. For me, that’s weak. In some ways, I became even more radical. It was an [opportunity] to stick to my guns and prove my fundamental beliefs. That sense of rebellion empowered me.”

What was the most important lesson you’ve taken from the experience?

“That life is super fragile, and that it could end any day. I’ve definitely became more effective by saying yes to life. I’m not waiting for anything. I’m a man of action.”

What advice would you pass on to your younger self?

“Read and understand your contracts…”

When the time comes, what would be written on your tombstone?

And, what if you found yourself in front of Saint Peter at the pearly gates?

“I have been honest, I have no regrets and I can be proud. I reject the existence of the deities, but if I’m wrong I have nothing to fear…”

Behemoth touring the UK this month with At The Gates and Wolves The Throne Room. Get your tickets now.