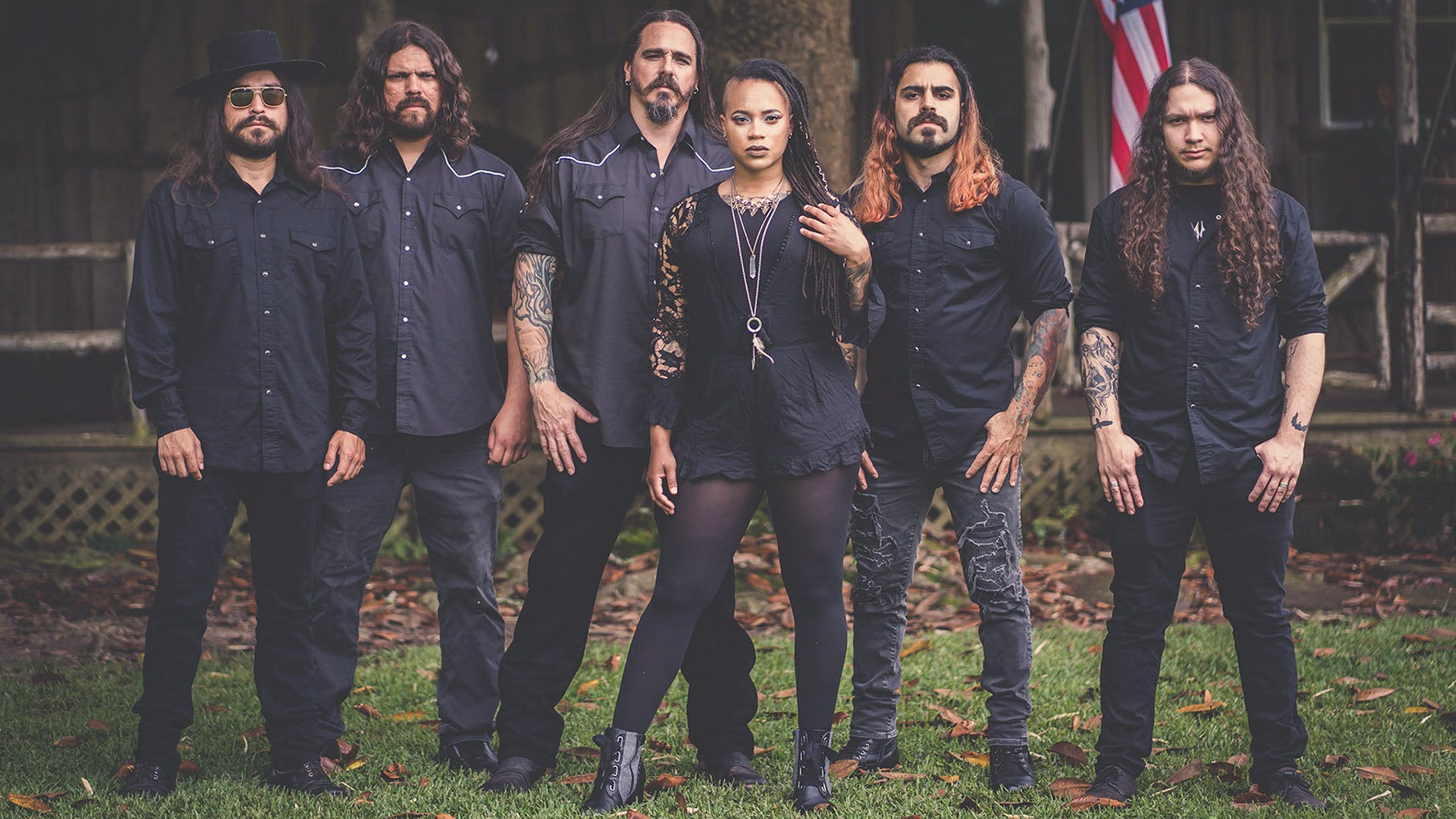 Kerrang! is talking to Cammie Gilbert, the golden-voiced vocalist of Texan doom/death/goth metallers Oceans Of Slumber, about their new, self-titled album, which explores topics that have turned out to be more relevant than she could have imagined.

Cammie grew up in a household where music was all around her: her parents met in a church choir where her father – a professional musician – was the choir leader. Their house was full of the sounds of jazz, blues and R&B greats like Anita Baker and Aretha Franklin, and her mother was constantly singing.

“It’s a magical thing when you see a parent let loose and sing along to something,” Cammie says. “My mom could be very silly, and she would grab the remote control and use it as a microphone. So when I saw her get excited about singing, I would get excited about it, too.”

When Cammie hit her teens, she discovered rock music. And while her parents were hesitant to let some of the heavier stuff into the house – “I couldn’t really listen to Korn or Slipknot because of the lyrics and album covers,” she laughs – she found solace in grunge and alt.rock. “I wanted that same emotion that I felt as a child listening to music, and I felt like Layne Staley and Chris Cornell’s vocals were equally soulful.

“Not a lot of black kids back then were into rock and metal around me,” she continues. “So it was a bit isolating. But that was the music I felt tethered to. I was a bit of a loner until college. I didn’t really get that sense of community in the metal and rock scene until I was an adult and could just go to shows.”

Fast-forward a few years and Cammie was singing in rock bands herself, feeling as though she had found that community – and was about to find her calling. The band she was in were opening a show in Houston for Oceans Of Slumber, who heard her warming up in the car park outside.

“I would do these big, melodic runs as warm-ups, because I grew up listening to Luther Vandross,” Cammie says. “So there I was, wailing in the car park, and Dobber’s [Beverly, drums] friend saw me out there. I was the only black chick at this show, and wearing this bright electric blue dress, so I stood out quite a bit. Later on they said to me they were like, ‘Who’s this girl!?’

“When we performed I remember Dobber and his friends standing in front of us with straight, serious faces. I was like, ‘They hate us,’” she laughs. “But I guess they didn’t!”

The band asked Cammie to sing on some tracks, and when original singer Ronnie Allen left in 2014, she replaced him. Now Cammie and Dobber steer the Oceans Of Slumber ship, with Dobber writing “85-90 per cent” of the music and Cammie writing the lyrics. And after she joined, their musical relationship developed into a romantic one.

“Dobber and I always had an instant click,” Cammie says. “And I think that, for the kind of people we are, it’s important that we share the music aspect of ourselves. It’s so much of who we are. Also, we get to travel the world together, share a stage together, and that means so much to me – there’s nothing like it.”

Now, with Oceans’ fourth, self-titled album, they’re taking things to a new level. Musically, they’ve upped the grandiosity – as Cammie says, “Dobber writes with this cinematic quality, like a soundtrack to a movie that doesn’t exist” – with darkly opulent, anthemic songs that the band describe as ‘calls to action’. Cammie notes that, up until now, her lyrical journey with Oceans had been more introspective. But for this new album, she found herself inspired by wider societal topics – and the past.

“About a year ago there was all this colourised World War II footage released [World War II in HD Colour], and Dobber is a huge history buff so we went to watch it,” Cammie says. “Seeing it in colour just blew my mind. It’s one thing seeing footage in black and white. But seeing it in colour, it looks so modern, so it plays with your head differently.

“In watching them I learned about the things that led to these wars, the offshoots of the cultures, the sociology, the psychology. Things like the rise of Hitler, and how masterfully he did what he did. And you start to see patterns, and see how this relates to current affairs. You realise that nothing is ever new. We went into a deep hole with war and global relations, from World War I to Vietnam.

“After I watched them I was like, ‘How do I tell everybody about history? Do people know that this happened?!’” she remembers. “I felt like people weren’t aware of history and how much it effects the situations we’re in now. If you have a mental illness, a psychologist is going to ask you how you were raised and where you came from. As a society, as a culture, you have to look at your history, too.”

Given the events of 2020 so far, from the pandemic to the Black Lives Matter movement, Cammie’s lyrics feel especially pertinent today – and she feels that’s no coincidence.

“I look back now and try and see the trajectory of what made us make an album that would have such relevance now,” Cammie says. “I don’t believe in chance. I actually think other people were on the same trajectory. People are now paying attention to that history, and how perceptions and institutions have shaped the world around them. Once you learn the truth and all the information, you can’t unsee it.”

Cammie’s approach to penning lyrics is thoughtful and creative. In Pray For Fire, she explores the contrasting functions of fire for both renewal and destruction: the controlled burns in national forests that help to protect the people and the land, and the use of flamethrowers in combat. For the album’s first single A Return To The Earth Below, she examines her own struggles with depression alongside wider societal patterns. “I feel like I have to stay focused and maintain striving forward to help myself,” she explains. “Everybody has things they deal with, things they have to overcome. You broaden that again, and see how society falls into bad patterns. Things can seem fine, but then very slowly, just like Hitler Youth, they can start to overtake – before anyone notices.”

There is a playful side to Cammie’s writing, too. The penultimate song The Red Flower is about the struggles and contradictions of womanhood, and it’s followed by a cover of Type O Negative’s Wolf Moon. “We’re huge Type O Negative fans!” Cammie grins. “The Red Flower is this song to womanhood, and it’s followed by what I think is a super-romantic love song by Pete Steele,” she laughs. “He's just this loving man, who wants to alleviate some of her stress! I felt like it was a bit cheeky for me to cover that song as a woman, and it gave the album a bit of a lighter emotional weight to end on.”

And overall, Cammie has hope for the future, particularly with the next generation.

“Children are seeing a lot more information than we had in our lives, and that’s definitely gonna shape them, I think in good ways,” Cammie says. “It’s an informed, smart, and emotionally-intelligent generation that’s coming up. I believe they’re gonna take action, and undo some of the wrongs we’re seeing. I have hope in the long game.”

Oceans Of Slumber is released on September 4 via Century Media

Oceans Of Slumber's Cammie Gilbert: "I feel like my history is broken, I feel like America is broken"

Oceans Of Slumber vocalist Cammie Gilbert shares her thoughts on American history, her own heritage and where we go next