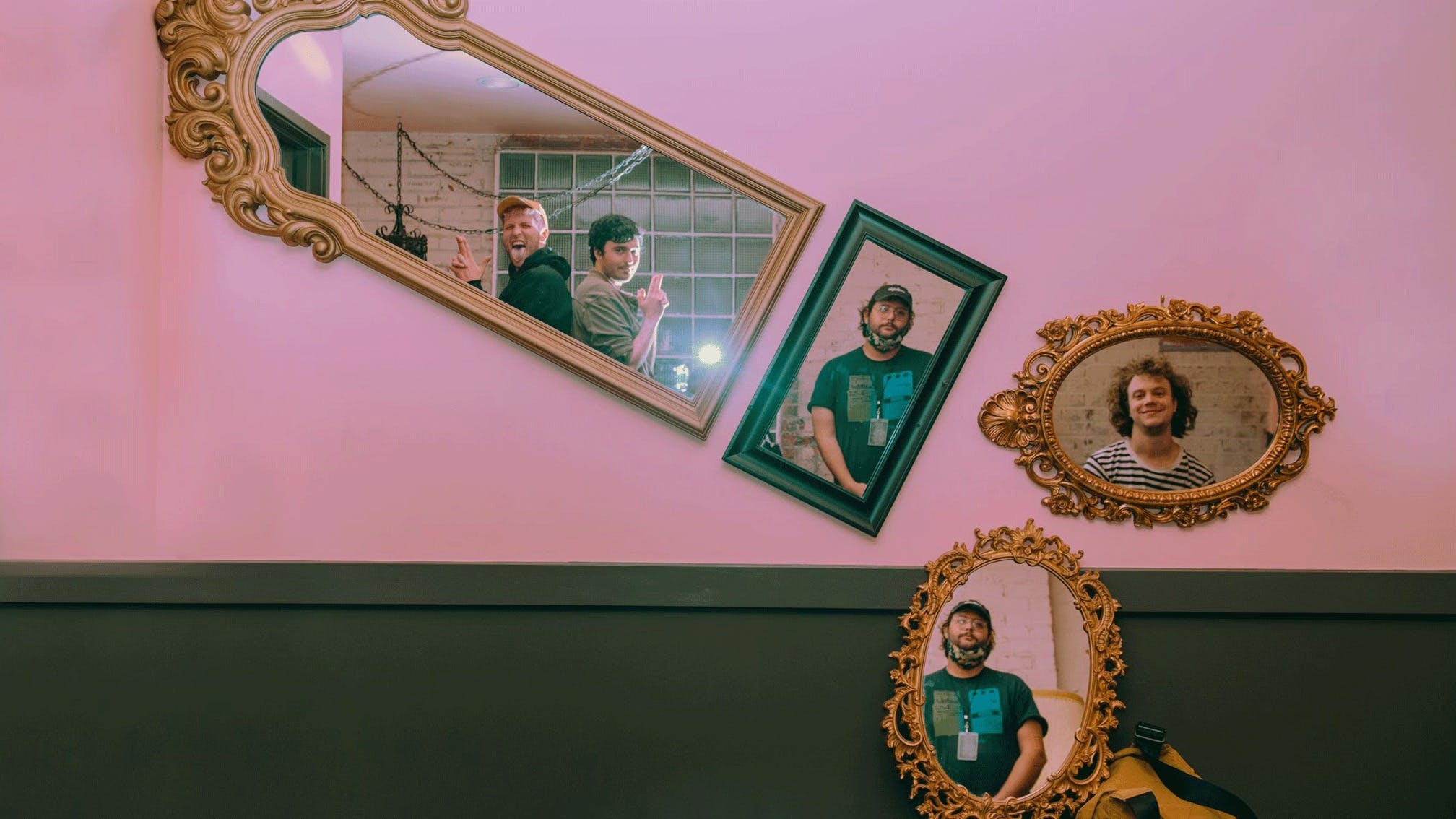 Perspective is a complicated thing. It can arrive with age and experience, but it can also be a by-product of harsh resets that take some getting over. A harsh reset like your van sliding off a highway in a blizzard and hitting a snow plough, maybe. In November 2018, as they dug in against good sense and attempted a 12-hour drive home at the end of a tour, that’s exactly what happened to Prince Daddy & The Hyena.

The roots of the Albany, New York band’s new self-titled record can be traced back to that moment, but isn’t really a direct response to the crash. Instead it’s a colourful, ambitious, vital examination of mortality and the terrible weight that can settle on a person’s chest when they get too into the idea that they will die, and so will everyone they’ve ever cared about. It’s about perspective.

“The crash itself was scary and painful in a literal sense,” vocalist and guitarist Kory Gregory begins. “But it was mostly opening up a wormhole of feelings… of impermanence, I guess? It became an obsession after that.”

Almost immediately after the accident Prince Daddy recorded their expansive, already-written second album Cosmic Thrill Seekers. A barnstorming suite of songs that wove a discussion of mental health around the narrative beats of The Wizard of Oz, it sealed Kory’s spot as one of the most interesting writers in American punk. But its deliberate, meticulously-planned assembly didn’t accurately reflect what was happening in the real world, away from the twisters and lions and tigers and bears, oh my.

Kory kept coming back to his fear of dying, over and over and over again. It left its fingerprints on every part of his life, constantly reshuffling his thoughts for him so that they came to rest on that sense of fragility. This skittering, spiralling feeling was reflected by the nature of the songs he began working on, songs that skipped short, sharp guitar-forward crunch in favour of synth beds, snatches of jangle-pop and morose, drawn out sounds.

Prince Daddy & The Hyena is not a concept album in the way that Cosmic Thrill Seekers was. It lacks the planning and intentionality – concept implies that Kory set out with a goal in mind, whereas the reality is more messy, more human. He wasn’t seeking a concept as much as there was one idea that he couldn’t escape. Faced with that, midway through the process the creative gears stopped grinding onwards. He spent a month in a psychiatric hospital.

“This one was a lot less calculated,” Kory says. “If someone does listen to this and it comes across as a concept record, I feel like it’s very unintentional. It was kind of natural, just like a snapshot of where I was at when I was writing the songs. I wrote a bunch of songs in the past couple years, and they ended up being somewhat cohesive.”

The reality is that a lot of people have become more attuned to Kory’s way of thinking since he started writing those songs, too. A couple of years spent dealing with a global pandemic, seeing digits on a screen change and realising they are people who were here a few days ago talking to their kids, scrolling through Netflix, pushing hospital trollies, making coffee, playing guitar, worrying about their friends – basically doing being alive stuff – will do that to you. “​​I didn’t write this over quarantine thinking, ‘I’m going to write a quarantine record,’ but that is very true,” he agrees.

“There’s a point to where the unanswerable nature of that concept makes it something of an unhealthy hole to fall down,” Kory continues. “That’s where I found myself, and a lot of people probably found themselves in that hole the past couple years due to COVID and having time to think. I didn’t want it to feel like I was trying to organise those thoughts, because I don't feel like they’re capable of being organised. I wasn’t afraid to let the album sound like a car crash: fast song, slow song, heavy song, soft song.”

The word Kory keeps coming back to is “whiplash”. Prince Daddy & The Hyena (the album) lurches from point-to-point, slamming into turns that make less sense on paper than they do in the flesh. It has a stately, atmospheric opener that is immediately swept from the board by a ripping punk song, which is elbowed aside by Weezer-esque college rock, which is then asked to vacate the floor by a killer Teenage Fanclub impersonation. Soon, the shifts are occurring within the confines of individual songs, with serrated guitars carving through bedroom pop intros with a genuine sense of surprise. “It’s making the expected feel a little unexpected,” Kory explains.

As much as the record ducks and weaves, though, the musician was able to latch on to a feeling that made him certain these songs belonged together. There is a recurring character on the LP called The Collector, described as “depression or death in corporeal form”. The listener is asked to think of this figure in relation to the album’s sleeve art – a photo of Kory’s cousin dressed as a clown that is, no two ways about it, creepy as shit. This image served as a lightning rod during writing.

“I don’t know if this sounds cheesy, it probably does, but that’s fine, because I’m cheesy,” Kory says. “Every song that made it on the record, in my head, I’d be thinking, ‘This is gonna be a song that is on the record with this cover.’ Not even in a deep, conceptual, ‘This is the character’ kind of way, just the cover itself, how it looks. It was kind of like glue for me.”

There are so many possible avenues presented by the sounds on Prince Daddy & The Hyena that it’s a fool’s game to wager on where the band might go next. Kory doesn’t know either, but observes that he has a settled line-up – completed by guitarist Cameron Handford, drummer Daniel Gorham and bassist Adam Dasilva – working alongside him that gets excited about the same things. “Whenever we all get in the room to learn songs I feel our brains are all on the same page,” he smiles.