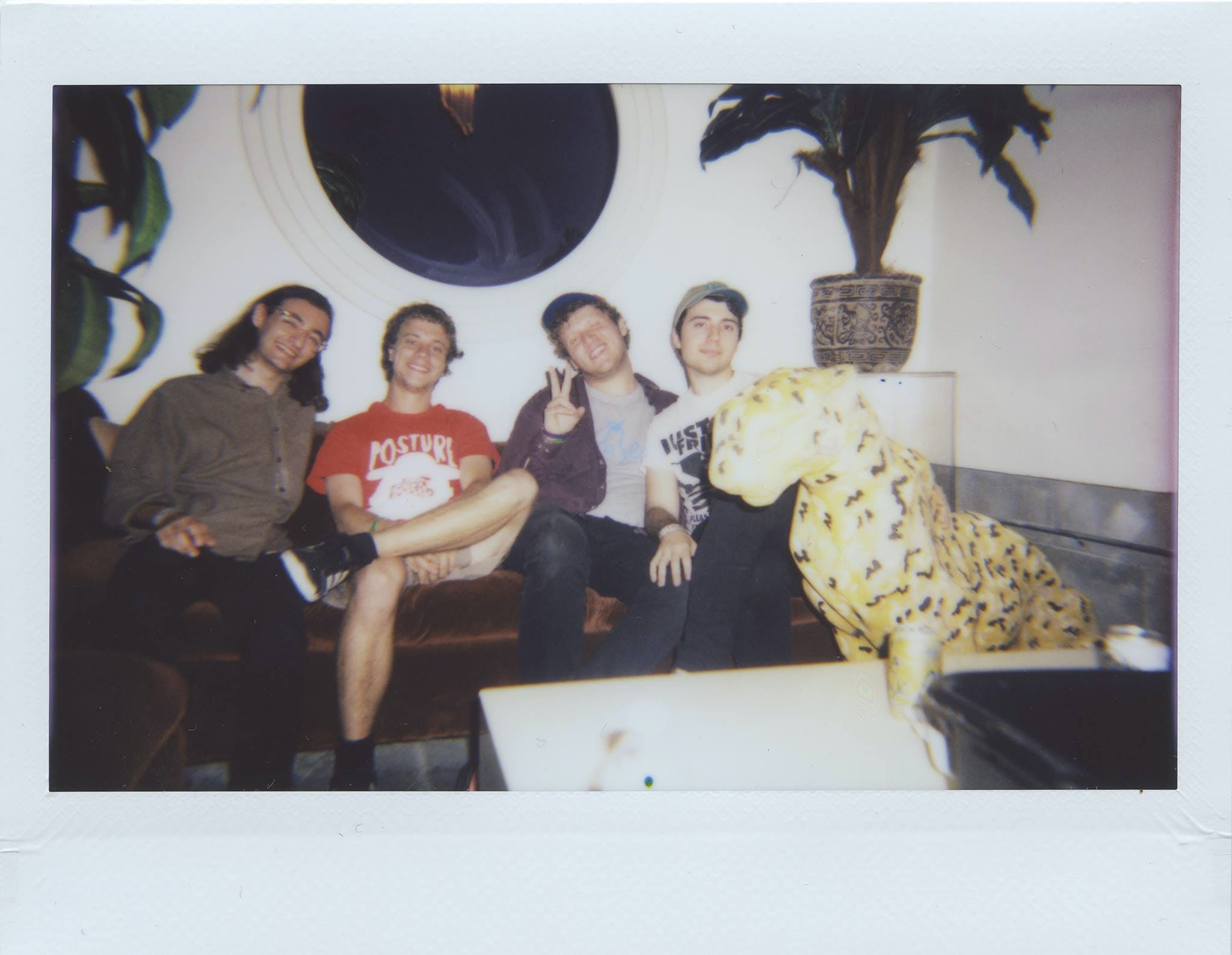 It all started with a really bad acid trip.

“Honestly, the trip wasn’t that bad,” Kory Gregory clarifies with the lively enthusiasm that permeates even his darkest anecdotes. He’s the frontman of Prince Daddy & The Hyena, a band from Albany, NY who sound like if Weezer, Green Day, PUP, Titus Andronicus, and a smattering of pages from emo’s 30-year playbook, were all in a push-pit together. “But the next day I didn’t fully come down. And to this day -- I mean I obviously have -- but internally it feels like I haven’t.”

Kory’s talking about the conception of Cosmic Thrill Seekers, the long-awaited sophomore album that Prince Daddy & The Hyena are finally releasing on June 28, nearly three years since their debut, I Thought You Didn’t Even Like Leaving. The thematic idea for the record was crystallized after that acid trip, which happened roughly four years ago (before their first album was even released) and ended up directly inspiring the first song on Cosmic Thrill Seekers, the unassuming ballad-turned-banger I Lost My Life.

“Something weird clicked during that acid trip and I definitely fucked up my brain a little bit,” he says. “Every little thing I do is more calculated now because I feel unhealthily self-aware. Everything feels a lot more intense -- even the stuff that doesn’t really matter at all.”

In the aftermath of that experience Kory saw a therapist and began taking Klonopin for a panic disorder the trip induced. But a couple weeks after the event, he plopped down on the couch and watched The Wizard of Oz, with no preconceived idea for how profoundly the film would affect him. “Even though it was a stretch, in my head I noticed some weird parallels and little things—not so much lining up. But it was giving me a little template as far as how to organize my thoughts . . .Through the lens of The Wizard of Oz.”

Much like their long-winded name and project titles, Prince Daddy & The Hyena operate a fret’s length between total absurdity and compulsive sincerity. I Forgot To Take My Meds Today, a crunchy pop-punk anthem from their last record, contains a set of anecdotes about Kory’s crippling anxiety. But the song’s music video is a longshot of the quartet ripping through a blunt while giggling merrily on a couch. Kory, who writes all of the music and lyrics, still loves that era of P Daddy. But he knew he wanted to shed the lighthearted self-defense mechanisms and make something even more unflinchingly personal for Cosmic Thrill Seekers. The Wizard of Oz’s arc felt like an eerie reflection of the cyclical mental health struggles he found himself writing about.

“[That movie] is essentially just her dream,” he says. “So every character in that movie, besides the very beginning and the very end, is just her in her thoughts. Even though there’s different characters besides Dorothy, they’re all just figments of her imagination. Even though a lot of them are supposed to be a mirror image of her uncles or whatever. They’re still just happening in her brain and I thought that was really cool. And I obviously used that template on Cosmic Thrill Seekers.”

The album’s 14 deeply personal songs are broken into three chapters, each one corresponding with a different character in The Wizard of Oz. The first is The Heart, which is what Kory describes as his “manic love” phase. “When the heart is the only thing that gets me up in the morning, that’s my manic phase.” The next is The Brain phase, a recurring period of Kory’s life in which he tries to, counterproductively, preserve the euphoria of his love phase through isolation. When that inevitably fails, Kory finds himself in what he calls The Roar phase, an impulsive whirlwind of self-destruction.

“It’s the portion of the story that your parents wouldn’t want to find out about,” he says with a laugh. “It’s not coming home for months on end, drinking every night, doing drugs, doing weird things that you normally wouldn’t say yes to and that you probably shouldn’t say yes to. But you’re unhealthily reacting to an unhealthy state.”

And just like Dorothy in the climax of her tale, Kory ultimately finds himself escaping that nightmarish realm by returning to the place he was, deep-down, seeking all along. “And then your roar phase leads to you missing your mom and going back home and being in that heart phase again and being appreciative for everything,” he says. To go along with that, the last song on the album trails off with the same lick that opens the record. The whole thing can technically be played on an endless loop, reinforcing the patterned nature of the album’s theme.

And if that wasn’t enough, there are actually three alternate chapter titles for each of the sections: The Passenger, The Driver, and The Random Passerby, respectively. Those are where the space motifs of the album comes into play, as each of those titles represents a different character- -- or rather a different manifestation of Gregory’s conscience -- that he interacts with throughout the record’s galactic odyssey.

“Talking about space and the great unknown isn’t that far off from talking about Somewhere Over The Rainbow,” Kory says. “We would always say that Dorothy was the original Cosmic Thrill Seeker.”

It’s dense stuff, and Kory absolutely obsessed over the interplay of the lyrics and the record’s tedious composition for over four years. And this entire idea was all of his doing. He didn’t even show his bandmates the songs until a week before they went into the studio to record them.

The final product is a record that sounds as intensely tumultuous as its story is. Kory says he instructed the album’s producer, P Daddy’s good friend Nick “Scoops” Dardaris, to render a very specific musical aesthetic: “I wanted to make a Disney soundtrack written by a punk band,” he says while simultaneously laughing and emphasizing how serious he was about that statement.