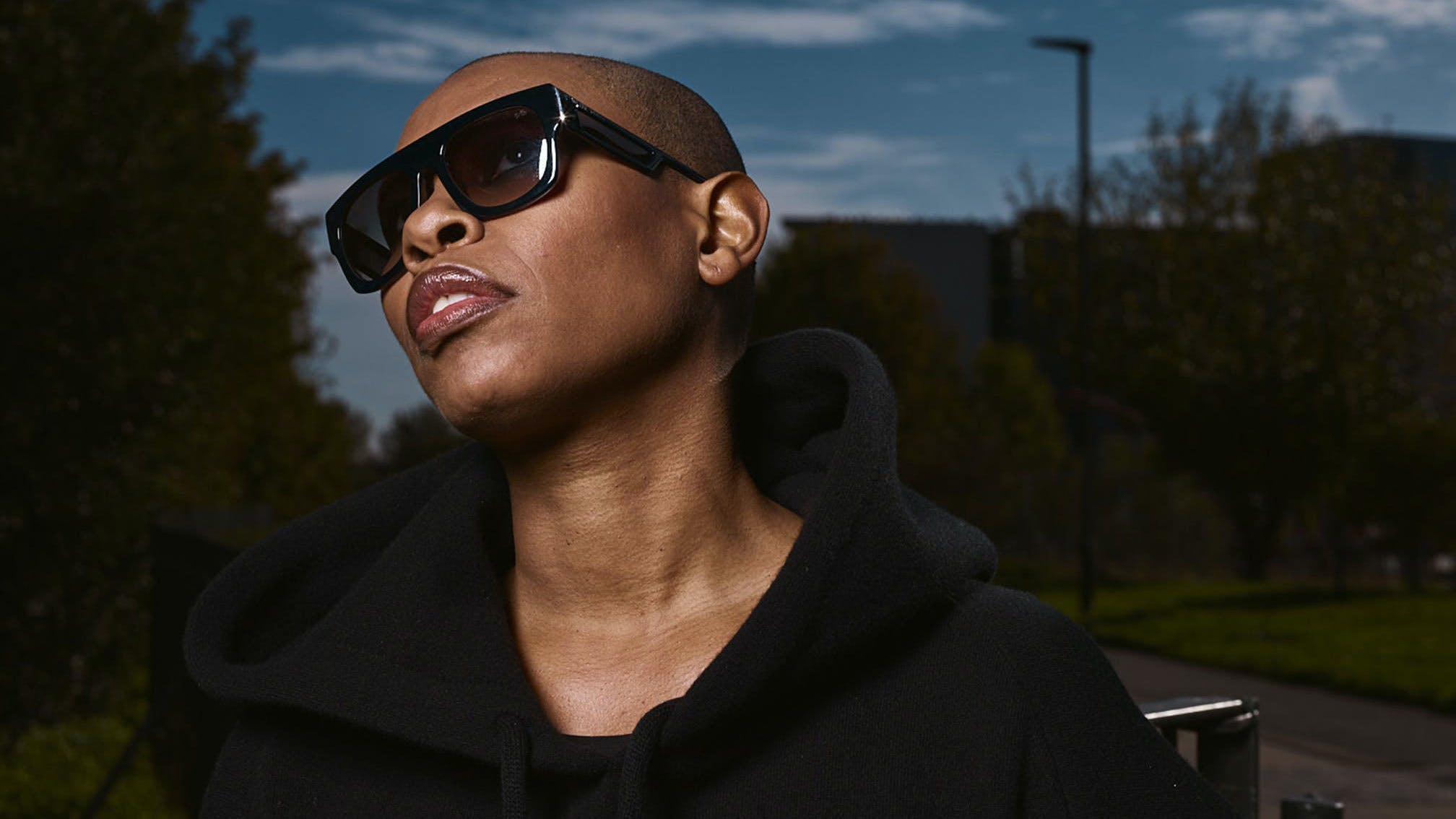 On July 16, 1998, Skin and Richard ‘Cass’ Lewis were eating dinner with a thousand other people at the Kruger National Park in South Africa as part of a gathering brought together to celebrate the 80th birthday of former President Nelson Mandela. As the night’s MC began reading out the shortlist of names of people who would be permitted onto the stage, the pair – the singer and bass player with Skunk Anansie, respectively – joked that they too would be called.

And then they were.

“We were sniggering to ourselves that they’d say our name,” recalls Skin. “And then we heard them say, ‘Skunk Anansie!’ Shit! So up we went. We had a little conversation [with Nelson Mandela], and then we went and stood next to Michael Jackson, Danny Glover, Stevie Wonder and Nina Simone, and we all sang Happy Birthday to Nelson. Stevie played the piano, and I sang the lead while Michael Jackson did the harmony. So, yeah, it was quite a magical night…”

One for the ages, to be sure. Certainly it wasn’t a bad yield for a band who, in 1994, began life in a rehearsal room in the then-dependably sketchy London neighbourhood of King’s Cross. Emerging from a tube station at which 31 people had burned to death just seven years earlier, Skin would jog through its streets to her destination so as to avoid the attention of muggers. Drug addiction, prostitution and homelessness were rife. As the singer says, “King’s Cross was a cesspit of human society. It was an absolute cesspit, and gloriously so. I think some of the best bands come out of cesspits.”

Twenty-seven-and-a-half years later, these days Skin divides her time between New York City and north-east London. The number is telling: in the autumn of 2019 Skunk Anansie were part-way through a tour celebrating their 25th anniversary – although not quite: their operation was up on bricks for eight years at the start of the century – when you-know-what forced them to postpone dates scheduled for spring of the following year. At last, though, after so much unpleasantness, the quartet (the line-up of which is completed by drummer Mark Richardson and guitarist Martin ‘Ace’ Kent) returned to the road for make-up dates in mainland Europe and the UK. As well as this, in January Skunk Anansie issued Piggy, their first single for two years, the response to which Skin describes as “probably the best we’ve had for anything in a very long time”.

“People say to me, ‘Well, do you define success as having sold six million albums?’ or whatever it is now, and I’m kind of like, ‘No, the definition of success is having a life that I directed and that I still make enough money from that I don’t need to do anything else.’ For me, it’s managing to do this, to enjoy it, to still make money, do great gigs, and still be lauded by people. I guess now we’re in this ‘legendary status’ bracket, which is quite interesting. Hopefully we’re one of the bands that people are looking up to now, that the kids are looking up to.”

Doubtless they are. Certainly Skunk Anansie’s show at the O2 Academy Brixton, in the summer of 2019, featured a noticeably larger demographic of people – not least same-sex couples and women of colour – that are sometimes absent from other similarly loud gigs. Not that the scene is necessarily an exclusionary place, you understand, it’s just that, as their singer explains, the group “offer solace. People can come to a Skunk Anansie gig and be free. In the privacy of our gigs, they have that hour or two to just be themselves.”

On the first day of spring, Skin speaks to Kerrang! from her home in the lovely Brooklyn neighbourhood of Greenpoint. Wearing large, white-framed spectacles and a pink beanie, she looks not a day older than she did when she helped upend British rock music with early-day albums and singles such as Paranoid & Sunburnt, Selling Jesus and Weak; to her left is a wardrobe that presumably houses a portrait of herself ageing in real time.

Needless to say, the stridency that drew listeners to her band’s flame more than a quarter of a century ago also remains present and correct. It is a testament to this triumph that in the 21st century, by sheer force of will, Skin has dragged the mainstream in her direction to the extent that today she is both an OBE and the Chancellor of Leeds Arts University.

Once a week, on Saturday nights she presents a programme on Absolute Radio. In 2019, Stormzy’s unintentionally erroneous claim of being the first artist of colour to headline Glastonbury (Skunk Anansie beat him to it by a full 20 years) warranted a full apology from the rapper.

The middle years of the 1990s were a remarkable period for British music. In what was an era far more defined by genre and uniform than is the case today, the emergence of Britpop as an antidote to the ubiquity of American alternative music filled the airwaves and the mainstream press. But notwithstanding the quality of bands such as Blur, Oasis, Supergrass and Pulp, one defining feature of this attention-grabbing movement was its racial and gender homogeneity. In other words: it was white and male.

In the scene next door, however – it was sometimes called ‘Britrock’, although the clumsy soubriquet never really stuck – artists such as Skunk Anansie, The Wildhearts and Feeder featured members who were from different racial backgrounds. What is interesting about this is that in the ’90s it was far easier, and much more acceptable, to present fans of loud music as being backwards, and – whisper this – even bigoted, no matter that the evidence suggested differently. Oh, the irony.

“I think that people get into rock music because there’s a passion and an authenticity there,” says Skin. “And there’s a rage and an anger there, too. It’s really the land of the outsiders. And it’s all about being the uncool kids. To be into rock music was definitely a choice you made about going against the grain. It was the underground music. It was music that had a bit of edge to it. So I think that those people are a lot more empathetic. Rock audiences are a lot more empathetic.”

When it comes to Skunk Anansie – and for a reassuringly high number of their contemporaries, too, in fact – they are still. Never mind that the movement was denied its full critical due by everyone bar magazines such as Kerrang!, the fact that in 2019, and in 2022, Skunk Anansie can fill such large venues proves this is the people’s music; it is they, and only they, who count.

These occasions are special for other reasons, too. As Skin observes in the opening lines of her autobiography, It Takes Blood And Guts, “No matter how far I travel, I’m always a Brixton girl. I can be drinking mescal while listening to Bob Marley in Mexico, or eating pizza in Napoli at 4am, but in my head I’m that child back home in Brixton Market, skipping between market stalls catching snippets of ‘big people conversations’.” For anyone looking for the root cause of the flint-hard political edge that has been part of Skunk Anansie’s DNA from day one, this is it.

“It’s ’cause I’m from Brixton,” she says, simple as that. “If you look at Brixton in the 1970s, when I was growing up, it was this under-funded, forgotten-about part of South London. Where all the black people lived. And that wasn’t talked about. Black people’s issues were not talked about. We were just kind of left to fend for ourselves, really. We had the added thing of the sus [suspected person] laws, too. A lot of those black inner-city areas also had to deal with a very racist police force. They would just arrest black guys on suspicion and search them. They’d make them be naked in the middle of the street because they had the power to do that. And I have three brothers, so I was well aware of that.”

Is it any wonder, then, that Skin and Skunk Anansie have proved tougher than the rest? She was 26 when the group signed their first record deal, a point at which “nothing could touch me”. Even at such a youthful age, she’d “been attacked in the street, I’d had a violent boyfriend, I’d been pushed around in the music industry, [and] I’d been in bands with people I fucking hated”. In other words, Skin was by then already built to last. As a member of one of the most vital, and certainly one of the most life-affirming, British rock bands of the past 30 years, her contribution to the cause of changing loud music for the better, in all manner of ways, has today rendered her an icon. And the reason Skunk Anansie’s audience remains by their side is because the band’s flame continues to burn bright.

“We’re in a nice position,” Skin smiles. “I think if it weren’t for the pandemic we’d be in a much stronger position, because I think COVID has knocked everybody sideways, and it’s certainly knocked Skunk Anansie sideways. So, while it feels really nice, it still feels quite precarious. You should never rest on your laurels when you’re in a rock band. But I do I feel that the kids, especially the TikTok kids, are really into their indie and rock music again. I think they’ve had 15 years of crap pop music, so now they’re getting back into the rock and indie roots to see what’s in there.

“And that’s great,” she adds. “Because, do you know what? I still love doing this.”

This article was originally printed in the March 2022 issue.