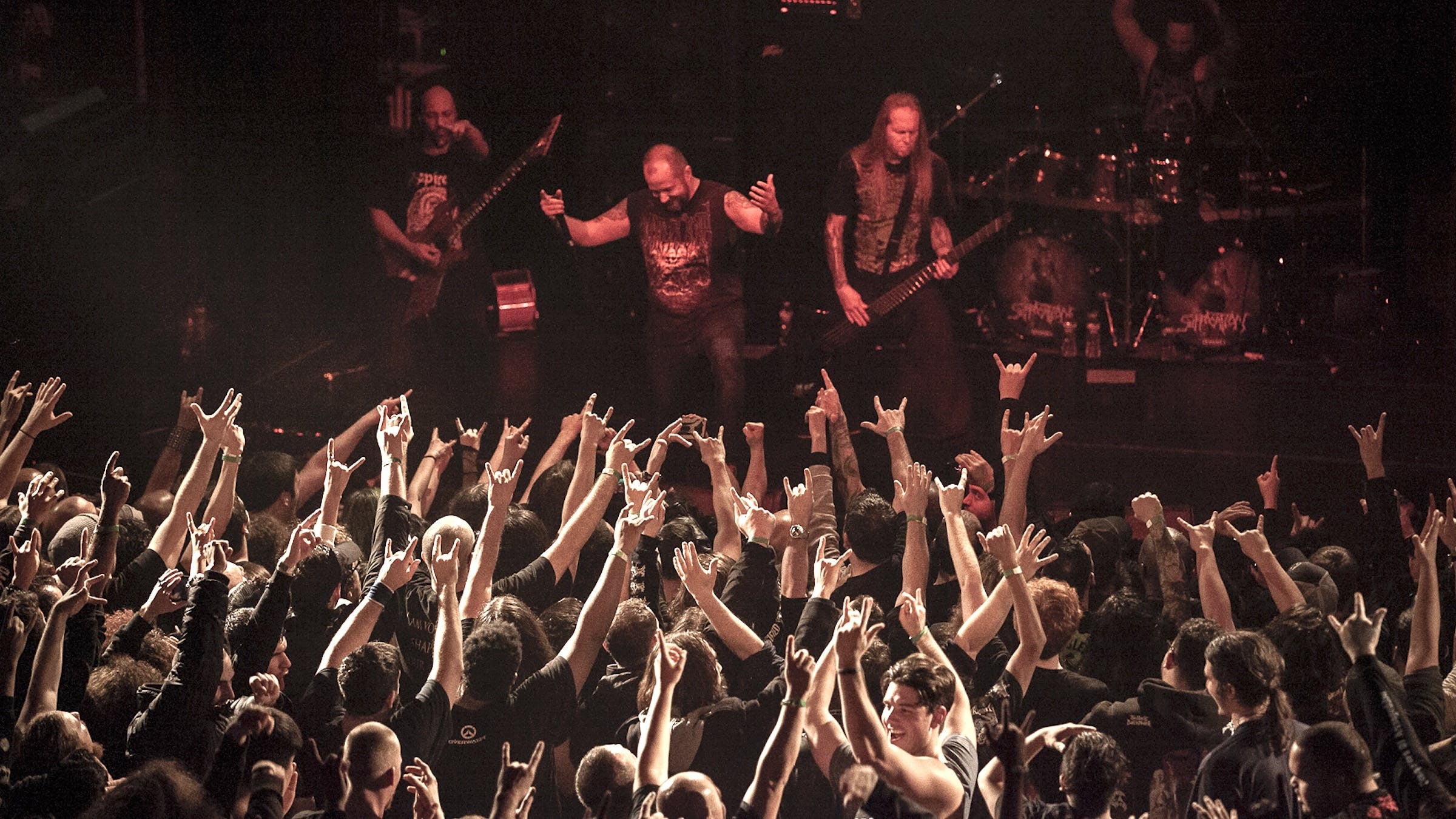 “There’s no crying in death metal,” Suffocation vocalist Frank Mullen tells a raucous sellout crowd at the Gramercy Theater in New York City. And yet, basking in the glow of the hero’s welcome that greeted him and his bandmates as Suffocation as they roll out on stage like the O.G. aural berserkers that they are, the pioneering extreme music vocalist -- preparing to perform his second-to-last show ever with the band, alongside Cattle Decapitation and Krisiun -- became overwhelmed with emotion several times.

“I fuckin’ grew up here,” Mullen says, his voice cracking. “I lived here my whole life pretty much. And you’ve all been here since the beginning -- except for the people that weren’t born back then.” He pauses to survey an audience that was, indeed, admirably diverse on multiple fronts, particularly for a metal show. “What a sight. I’m going to miss you all. But you get to a point...I’d rather go out on fucking top than go out on the bottom. You know what I’m saying?”

Thankfully, Frank has nothing to worry about -- the night's line-up is a killer one that would have to work hard to let him down. Brazil's Krisiun open up the night with a set of rabid, tireless death metal tunes that get the crowd's blood running. The band's task would normally be thankless, opening for a farewell tour of sorts where everyone is here to see one person, but their dedication to crushing old-school death metal endears them to the crowd, and they serve as the perfect appetizer for tonight's line-up.

San Diego's Cattle Decapitation are balls of energy tonight, and they pour their raw power directly onto the crowd. Though their lyrics and imagery are inherently tied into veganism and the politics of meat, the band's live show is gripping no matter what your lifestyle. Frontman Travis Ryan is a raging force of confrontation, but also displays the good humor and crowd interaction that drive the night. Their set is an awesome treat, leaving the audience hungry enough for more that they might catch the band as a headliner later.

When Suffocation take the stage, everyone goes wild. Frank, a huge smile on his face. “This set is the songs that I like,” he says the roiling crowd. “I hope you enjoy my selection.” In lieu of a voice vote the crowd signaled its approval via more physical, emblematic lingua franca as pit after pit opened up down front while the seated set in the back of the theater whooped and leaned forward with devil horns high. One particularly heartwarming sign of respect: Immolation bassist/vocalist Ross Dolan and guitarist Bob Vigna standing in the crowd, bobbing their heads and cheering at the end of each song.

For the next hour and change, Mullen & Co. proved this was no idle boast, opening the show with a scorching rendition of Thrones of Blood off 1995’s Pierced From Within -- “This song is about killing people,” Mullen explained, “because that’s what I like to do” --and then sandblasting their way through a career-spanning set that included the 1991 EP Human Waste track Catatonia, the title tracks from Effigy and Pierced, Surgery of Impalement from 2004’s rejuvenating banger Souls to Deny, As Grace Descends courtesy 2013’s Pinnacle of Bedlam, and more.

The night ends in cheers, a few tears, and a lot of heartfelt goodbyes. The crowd leaves feeling like they attended the retirement party of one of their oldest friends. If you ever needed proof that death metal is at its core a life-affirming form of art—one that seeks out chaos and darkness to bring sonic totems of vitality and enlivening defiance into the world, not nihilism -- it was here, on this night.