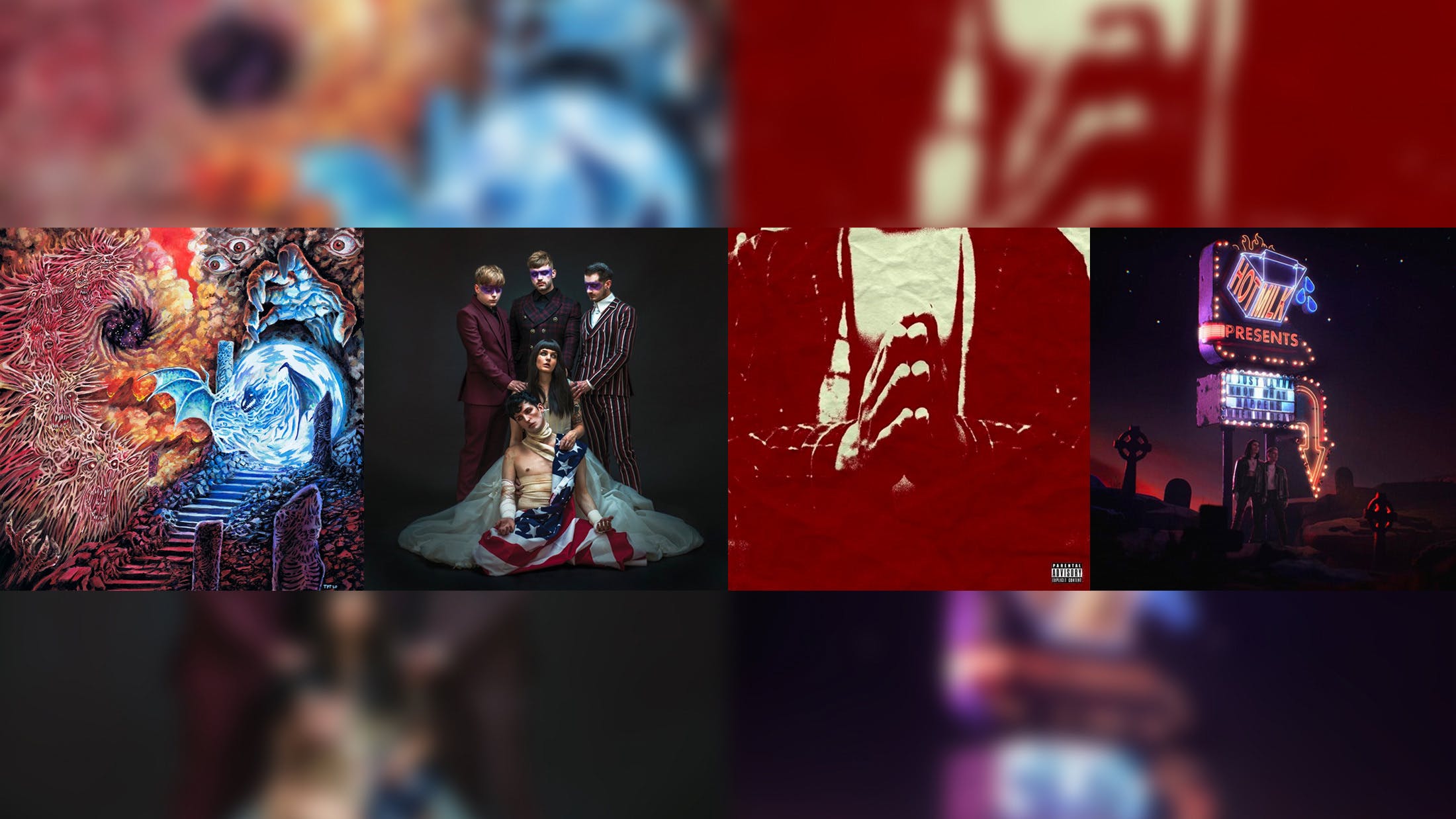 Every record named in our list of the year's best albums was bloody great, but it’s important to remember that, sometimes, big sounds come in small packages. Gone is the time when the humble EP was looked on as a secondary consideration – a stopgap, an experiment, a prelude to something more substantial. Nowadays it can be so much more.

For new bands breaking through, dropping a lean, mean handful of their finest tracks is an opportunity to establish their identity and sound while catching attention on already-rammed streaming services. For established artists whose record-tour-rest-repeat cycle remains wildly disrupted by the global pandemic, being able to experiment with new (or old) music has been an invaluable way of expressing energy and creative impulses that would normally be released on the road. For us fans, it’s meant a feast of new releases to get our ears around, with some of rock’s sweetest and most savage acts leaving their mark in snappy style...

The problem with supporting bands as big as Foo Fighters and You Me At Six when you’ve got next-to-no material in your back-catalogue is having to push through the weight of expectation when the songs actually arrive. Manchester power-pop collective Hot Milk, however, continue to deliver with effervescent ease. Picking up where they left off with 2019’s Are You Feeling Alive?, the five tracks of I JUST WANNA KNOW WHAT HAPPENS WHEN I'M DEAD only briefly toy with the angsty darkness of that portentous title before reverting to the candy-coated hooks of The Good Life and I Think I Hate Myself. Crucially, Han, Jim and the rest of the band go on to embrace their own rough edges and singular personalities on Woozy and Split Personality, confirming their knowledge that slickness is no substitute for soul.

9Delaire The Liar – Eat Your Own

Dropping on December 10, Eat Your Own capped-off a truly triumphant 2021 for London quartet Delaire The Liar. With four of its six tracks having been drip-fed as hype-building singles since the summer, alongside ear-catching support slots with the likes of Hot Milk and VUKOVI, fans were already hooked by the powerful vocals of frontman Ffin Colley and the deceptively layered post-hardcore of the band around him. But just when most of us thought our end-of-year lists were sewn up, DTL hammered their credentials home with a short selection of songs that run the full gamut – from the delicate piano ballad NO ENTRY to the gouging high drama of HALLOWEEN and unhinged closer DOG. 2022 should be massive for this lot – no word of a lie.

Loads of bands with at least one foot in the doom metal tradition love a bit of witch-schtick (or should that be broom-schtick?), but few in recent memory have backed it up with the swagger and sin of Manchester’s Witch Fever. ‘Wish I could misbehave / That's all I fucking crave!’ declares vocalist Amy Walpole on the opening track, laying down a marker brilliantly expanded on over Reincarnate’s wicked 20-minute run. The combination of sludgy metallic heft and scrappy punk energy (part-Black Sabbath, part-Bikini Kill) is expanded with flakes of grungy, nu and alt.metal flavour across the likes of In The Resurrect, Abject and In Birth, but the cauldron never bubbles out of control, keeping its coherent flavour and casting a spell that’s equal parts anger, anguish and sweet abandon.

When Boston Manor dropped terrific third album GLUE on May 1, 2020, the idea was only just dawning on them that we’d be stuck in a rut for months to come. Fittingly, Desperate Times Desperate Pleasures unfolds as a sort-of sequel, exploring the newfound reality of being caught in space and time by the metaphorical glue-trap of COVID. Instead of indulging in mindless catharsis, however, they’ve tapped into a wry outward gaze that feeds through that pun-believable title and down into the songs themselves, as well a focused inward look that’s ensured the likes of Carbon Mono and Let The Right One In boast more detail and polish than we’ve seen before. Trust the Blackpool boys to find the strange beauty in these greyest of days.

Nostalgia ain’t what it used to be. That’s the message at the heart of outstanding “mixtape” SURVIVORS GUILT from Cleveland-born, Wisconsin-based singer-songwriter Kenneth La’ron: aka KennyHoopla. Where the recent pop-punk revival has sometimes felt – despite the protestations of some of its biggest proponents – like a stubbornly backwards-looking affair, the eight tracks here aim to rekindle the headrush feeling of falling in love rather than simply pining over a memory. Building on the raw indie-rock flair of 2020 debut how will i rest in peace if i’m buried by a highway?//, under the guidance of blink-182 legend Travis Barker, songs like ESTELLA// and turn back time// feel like the product of a rare talent: able to work with one foot in alternative music’s storied past and both eyes on its limitless future.

5Knocked Loose – A Tear In The Fabric Of Life

Fucking hell, Knocked Loose. Most of the entries on this list are here for a good time, not a long time, happy to do their bit to lift fans out of lockdown’s endless dirge. The Kentucky maniacs headed in the opposite direction with the frankly nightmarish six tracks and 21 minutes of A Tear In The Fabric Of Life. Blindsiding us with all the bloody wreckage of a runaway combine-harvester at a school sports day on October 13, the new levels of hardcore abrasion and death metal heaviosity on show felt genuinely shocking, while frontman Bryan Garris’ overarching narrative and lyrical detail (‘Death comes home / Light the candles just to mask the scent… Hide you in my walls / Rotting’) are unapologetically sick in the all the best ways. Oh, and you should check out Swedish filmmaker Magnus Jonsson’s full-length, monochrome music video if you want ATITFOL to really haunt your dreams…

You can’t keep Creeper down. Although sublime second album Sex, Death & The Infinite Void was surely one of COVID’s cruellest musical casualties – the characters and crises of its OTT rock-opera designed to fill stages at shows that never came – the Southampton crew found another way to broaden and deepen the world of Calvary Falls. Posthumously continuing the arc of alien character Roe across the eight tracks of American Noir, Creeper offered so much here for fanatical followers of their knotty narratives, but also for fans who’re just partial to a bit of Jim Steinman-style overblown arena rock. From the rolling keys of Midnight to the stabbing strings of One Of Us, this was another defiant showcase from a band worth believing in.

For those of us lucky enough to make it along to June’s Download Pilot, avant-garde Leeds collective Static Dress felt like a revelation amongst a sea of familiar faces: sonically striking, visually arresting, pulse-quickeningly impassioned. At that point, they’d never dropped a physical release (which felt kinda fitting for music so stubbornly difficult to get a grip on), but with debut EP Prologue…, mainman Olli Appleyard formulated nine tracks that encapsulated the motivations that’ve thus far driven his band: part-narrative vehicle, part-social experiment, part-cutting-edge progression in the world of post-hardcore. Comparisons could be made to other outfits as great as Glassjaw and Code Orange but, really, Static Dress deserve to be experienced on their own unwieldy terms. So plug in and rock the fuzz out.

2Meet Me @ The Altar – Model Citizen

The face of pop-punk is changing. While everyone from Pinkshift and Poorstacy to KennyHoopla and Hot Milk are putting their own stamp on a genre too long dominated by white dudes old enough to know better/singing about teenage misadventures far enough gone to no longer matter, none of them are doing it with more earnest energy and vibrancy than Orlando-based trio Meet Me @ The Altar. Capitalising on the momentum picked up by last year’s spring-loaded single Garden, Model Citizen saw them flesh-out a soundscape – from 8-bit-inflected lead single Feel A Thing to the rapid-fire Mapped Out and heart-struck highlight Now Or Never – as captivating as any that fans of this genre have traversed before. Best of all, when they sing ‘Is it just luck or is the future lookin' kinda great?!’ on the aching Brighter Days (Are Before Us), it feels less like an easy hook than a sincere promise of even bigger, better songs to come.

Gatecreeper don’t fuck around, do they? Back in January, when the world of heavy music needed a slap in the face to stir us from our slumber, the Arizona kingpins staged a merciless ambush, giving 12 hours' notice that aptly-titled “double-sided album” An Unexpected Reality was about to split skulls. While the resultant release wasn’t quite as lengthy as some would’ve anticipated, there was nothing insubstantial about its eight neck-wrecking metal nuggets. Inspired by the old-school vinyl format (and released in a few dozen colourfully splattered variants) we got seven blistering bangers on Side A, each clocking in and around the one-minute mark, indebted to the buzzsaw sound of classic Entombed and the zero-fat bludgeon of vintage grindcore, with evocative titles like Superspreader and Sick Of Being Sober. Flip it over and the final track Emptiness sprawls over Side B, longer than the others put together: a pummelling 11-minute masterclass indebted to the dirginess of classic Cathedral, the crushing heft of death-doom icons Disembowelment and, fleetingly, the melodic flourishes of Swedish melodeath and Brit icons like Paradise Lost. None of it sounded like the Gatecreeper we thought we already knew. All of it left us begging for more.