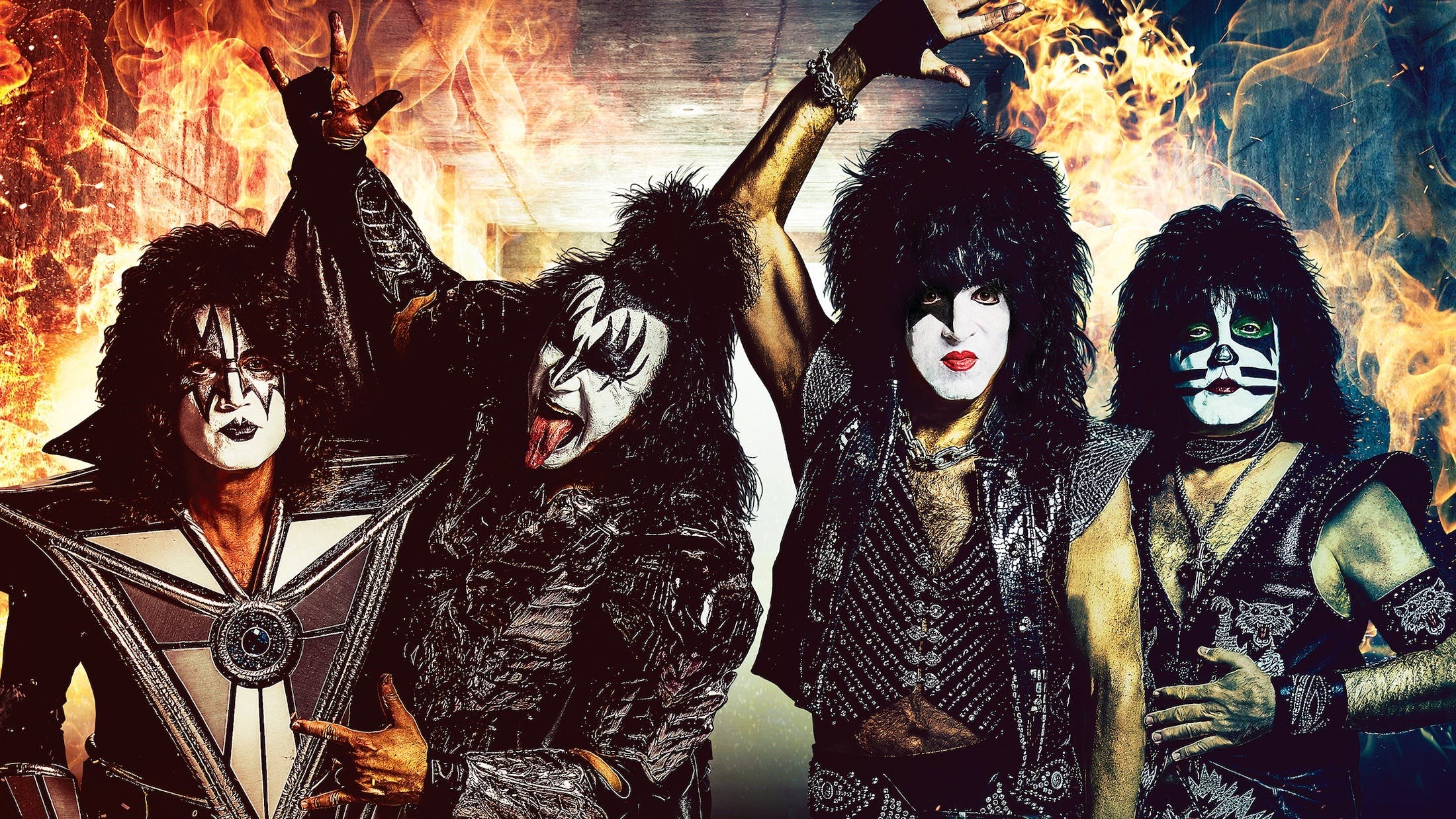 “We’re the McDonald’s of rock’n’roll,” declared KISS frontman Paul Stanley many moons ago. “We’re always there to satisfy.”

In fact, for the best part of 50 years, KISS have done just that; serving up a steady diet of anthemic tunes that have engrained themselves in America’s own psyche across the span of 20 studio albums.

The band’s own deliberate cartoon image elevated them from the New York club scene to arena stages across the States as the original four-piece of Paul (aka The Star Child), bass player Gene Simmons (The Demon), guitarist Ace Frehley (The Space Ace) and drummer Peter Criss (The Cat) developed a suitably gargantuan stage show to match. Then came the merch – everything from lunchboxes to lawnmowers and even coffins!

Now, the four-piece of Paul, Gene, guitarist Tommy Thayer and drummer Eric Singer are on The End Of The Road tour – a final victory lap that began in Vancouver in January 2019 and was meant to run for 114 shows. The ongoing circumstances have interrupted this last run of shows – including their appearance at Download – but the dates (which are estimated to gross an average of $1.5 million per night) are being rescheduled for 2021.

As we await confirmation of those shows, here’s a celebration of the band’s musical legacy and influence through 13 KISS tunes covered by other artists…

Melvins mainman Buzz Osborne has never hidden his love of KISS, going as far as to get his band to release a set of EPs modelled on the New York giant’s 1978 solo records. Unsurprising then that he jumped at Gene Simmons’s invitation to contribute a track to Kiss My Ass, the tribute album assembled by KISS themselves (finally released in 1994). Gene turned down this lurching, sludgy version – originally from 1974’s Hotter Than Hell – in favour of Dinosaur Jr.’s take on the tune, seemingly unaware that it had been mixed and co-produced by Kurt Cobain.

New York scuzz-rockers White Zombie followed up their second full-length, Make Them Die Slowly, with an EP that featured a groove-laden cover of Gene Simmons’ signature tune as its title track. The accompanying artwork saw leader Rob Zombie holding Gene's severed head to the fore – a controversial feat that surprisingly failed to solicit a single word of admonishment from its monstrously tongued owner...

As a small child, Anthrax guitarist Scott Ian liked nothing more than to stomp around his bedroom doing his best Gene Simmons ‘God Of Thunder’ impression. Watch him onstage and you’ll see what we mean. As a card carrying member of the KISS Army, Scott got to relive his childhood dreams when Anthrax covered this 1974 classic – its riff sounding more trenchant and thrashy than the original.

Co-written by famed LA Svengali Kim Fowley (the man who assembled glam-punks The Runaways), producer Bob Ezrin and Paul Stanley, this swaggering tune from 1976’s Destroyer muses on the false trappings of rock stardom. Nirvana released their gloriously dishevelled version of the track in 1990 on the Hard To Believe: A Kiss Covers Album just as they completed work on Nevermind – their own conduit to stardom itself.

According to Gene Simmons, any band that wears face paint owes a debt to KISS – corpsepaint included. If that’s the case, then KISS' influence on Scandinavian black metal comes via Bathory – Sweden’s extreme metal forefathers whose first four albums in the ‘80s had a marked effect on Mayhem, Emperor, Darkthrone et al. Bathory’s enigmatic frontman Quorthon was a teenage KISS fanatic, initially assuming the stage name of Ace (after Ace Frehley), and he returned to his first love by recording this raw-throated version of KISS' 1974 anthem.

Recorded for the soundtrack to ‘70s nostalgia flick Detroit Rock City, LA four-piece The Donnas deliver a perfect version of this Stanley/Simmons classic from KISS' 1974 self-titled debut, emphasising the track’s bubblegum pop sensibilities. The accompanying video brings in high school high-jinks to the proceedings, further adding to the sheer cartoon nostalgia of this cover.

One of KISS' heaviest tunes, War Machine appeared on 1982’s Creatures Of The Night album – a record released during arguably the band’s most turbulent period, which saw guitarist Ace Frehley follow original drummer Peter Criss out the door. The track’s heft is rammed home on this version by Viking heavyweights Amon Amarth who included it as a bonus track on their 2011 Surtur Rising album, alongside covers by Accept and System Of A Down.

Away from Slipknot, Corey Taylor loves blasting his way through a good old-school metal cover – a point emphasised by Stone Sour’s 2015 EP, Meanwhile In Burbank, which saw his ‘other’ band serve up tunes by Sabbath, Metallica, Priest, Alice In Chains and a version of this, the title track from KISS' 1977 long-player. A faithful rendering of the cock-rockin’ original, Love Gun finds Corey searching for his inner Star Child.

Pantera never officially recorded a KISS cover but they loved jamming their way through this tune live, with frontman Phil Anselmo adding a typically bruising vocal to their take on this Frehley-penned, booze-soaked favourite. The Abbott brothers, Dimebag and Vinnie Paul, were lifelong KISS fans and were both famously buried in Kiss Kaskets.

Dicky Barrett, the frontman with Boston ska-punks The Mighty Mighty Bosstones, was another musician who got the call from Gene Simmons about contributing to the band’s self-instigated tribute album, Kiss My Ass. In fact, that call is replicated on the intro to the super-retro video that accompanies this track. Ska vibes, though, are in short-supply; the band delivering a version of the tune that boasts a near-Southern rock edge.

Paul Stanley has always enjoyed deconstructing other people’s music. Back in ’76 he found himself inspired by Rod Stewart and wrote this song, and or a while he contemplated giving it to Rod, until Gene convinced him otherwise. Instead, KISS drummer Peter Criss recorded the track and it became the band’s second Top 20 ballad, following on from Beth. The tune’s forlorn lyricism is underlined on this version by New Jersey blue-collar rockers, The Hold Steady, who make it sound like the ruminations of someone after a long night out.

Recorded for Spin The Bottle, the 2004 Japanese KISS tribute album, this version of the 1976 classic is credited to Motörhead but is largely a Lemmy solo offering. His unmistakable vocal growl transforms the tune’s '70s glam stomp into something far more menacing; the original’s invitation to 'party on' becoming something of an order.

Chicago in the 1970s was a hard rock stronghold. Growing up in the Windy City, the teenage Billy Corgan obsessed over albums by UFO, Cheap Trick, Thin Lizzy and KISS. Unsurprising then that he should be able to throw in this strong-armed cover of this ’74 KISS tune into the Pumpkins live set – his relish at delivering a twin guitar attack evident in this footage. Hit it!