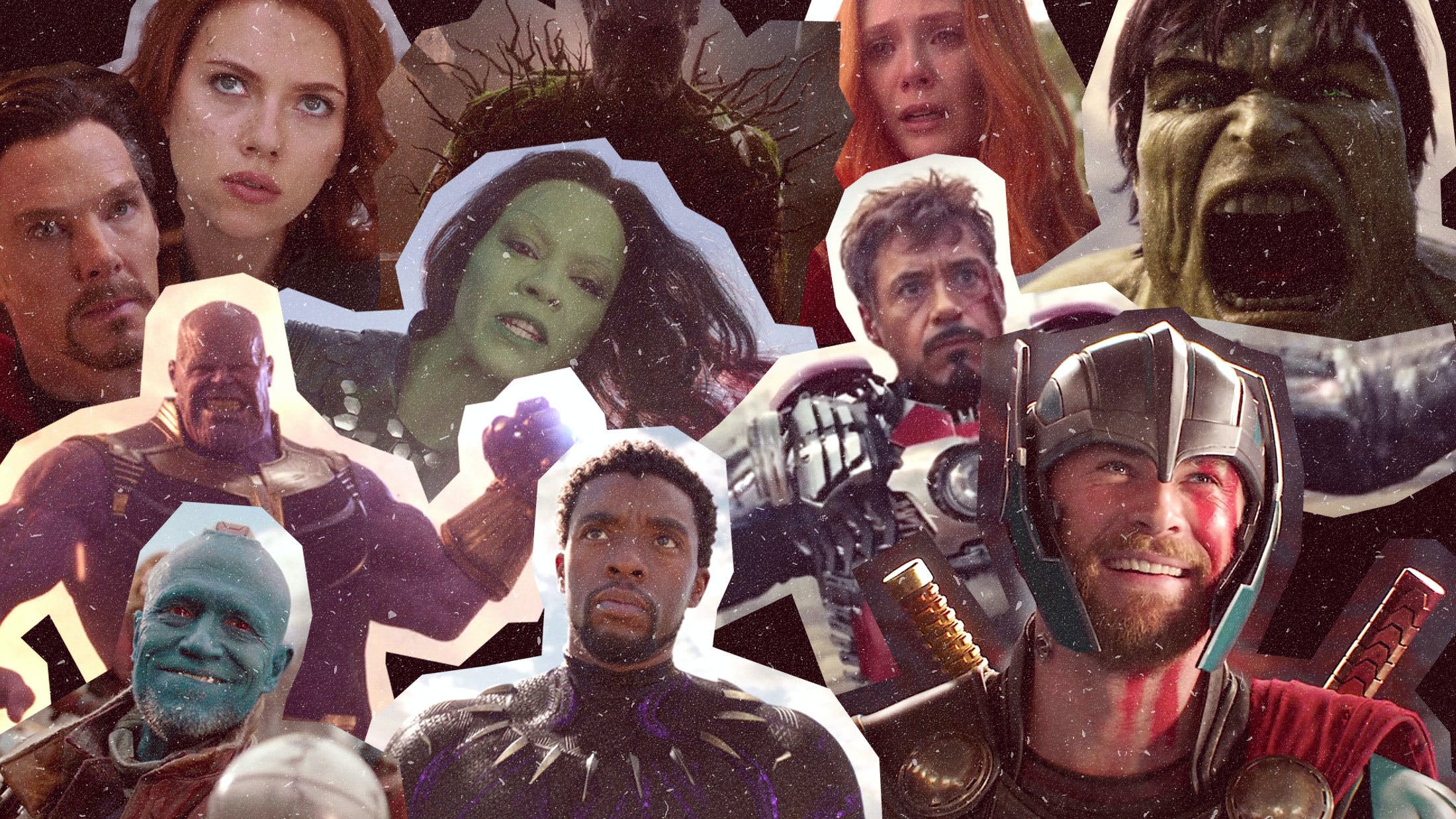 Is there a bigger entertainment success story in the 21st century than the Marvel Cinematic Universe? It seems unthinkable now, but back in prehistoric 2008, Iron Man was anything but a guaranteed hit – director Jon Favreau had to convince the studio that there might be a chance to make any kind of money on this wacky idea.

Now, of course, it’s pretty much the dominant force in Hollywood, being both a creative and commercial success, which is pretty nuts when you think about how much of it involves magic people punching each other in outer-space.

There are a lot of characters in the MCU – hundreds and hundreds – and some big names just make it nowhere near the top 25. Hawkeye might sport a savage undercut and sick sleeve, but he’s also completely rubbish (don’t write in). Captain America has about as flawless a beard as anyone’s ever grown, but he’s hardly metal, you know? Happy Hogan, a guy who is frequently out of breath but just excited to be involved, just missed making the list. It’s all very scientific. Again, though, don’t write in.

So, let's get stuck into it. Marvel-characters-who-are-in-any-way-considered-metal assemble!

A librarian who can kick the fucking shit out of you? Nails.

Thanos has chunky gloves and a voice like an oil rig, and spends his first few films sitting on a big chair in space like a massive ledge having a nice weekend. His big thing, though, is snapping his fingers, one of the least metal things you can ever do with your hands. He could totally have landed the top spot if he went for throwing the horns, giving the finger or even a good old-fashioned NWOBHM thumbs-up.

Just an extremely metal name, really. Killmonger? That’s amazing. Like a fishmonger, but for kills. What a dangerous kind of shop.

Big, friendly, enthusiastic and likes playing video games. Korg’s like the dude that picks you up when a pit’s got out of control and helps you find your shoe.

Angsty as heck with long, greasy hair – stick this dude in Seattle in the ’90s and you’ve got yourself a superstar.

Any time Justin is followed by a surname that is also a word, you expect a pun – just look at AFI’s Justin Sane or wrestler Justin Credible. Hammer is a badass, really unlikely surname, so Justin Hammer feels like it should be a pun, but simply isn’t – just in hammer? – and in a way, isn’t this just breaking even more rules?

The reality-bending, geometry-defying theatrics of Dr. Strange definitely have a foot in the metal world – think of the psychedelic visions of Tool’s BFF Alex Grey, for instance – but Strange himself feels like he’d just listen to extremely dry podcasts.

There are a lot of wacky eyes in metal – it’s the genre that has kept the milky contact lens industry afloat for so long. Kaecilius’ eyes are burned during a ritual involving blades, zealots, betrayals and ancient tomes, which is about as gnarly a way of being injured there is.

Anyone who has ever obsessively lined up the spines of a bunch of records so they match perfectly, or spent way too much money on a product they already have, but with a small amount of Japanese writing on, knows the thrill of completism. You know this dude would have some really interesting tidbits about, like, misprinted reissues and stuff.

Look at the helmet on that fucker. Crikey.

Sibling rivalries have fuelled so, so much rock music over the years. The eternal link between family members leads to incredible musical chemistry and shared visions, but at the same time, the people closest to you can hurt you the most. Estranged siblings who also hate their dad: at least 10 albums' worth of material. Also one of them’s green, and one of them has a big load of metal shit in her face. Bonkers!

Covered in tattoos, walloping everything with big-ass electric whip things, and making statements like, “If you can make God bleed, the people will cease to believe in him” is hard as hell. But managing to still seem metal-as-fuck while being nuzzled by a cockatoo is probably Ivan Vanko’s greatest achievement.

A black widow is a type of spider, a reasonably metal creature (Spider-Man is nowhere in the top 25, btw – he’s at about 38 and we will not be taking any questions). There’s also plenty more Russian about Natasha Romanoff. She’s angst-ridden and black-clad (while occasionally experimenting with animal print), sporting a series of wacky hairdos and an impressive collection of chunky belts. Russia is also hella metal at the best of times – hammers, sickles, snow, a cool alphabet… Lots going on.

Drax is enormous, covered in tattoos and haunted by a tragic past, plus has a voice like a deep well and incredible comic timing. There are at least 60 huge bands he could seamlessly join in a heartbeat.

Cool as all hell, frequently drunk and sporting glam-rock make-up, Valkyrie enters the movies living the kind of space-gladiator version of the “What happens on tour, stays on tour” lifestyle. She not only looks every inch the rock star, she’s also pushing boundaries as the MCU’s first LGBTQ+ hero and Asgard’s first non-male ruler.

Hela is the sort of character that KISS see and think, "Fuck, we should start making an effort." Walking around wearing giant fuck-off antlers and killer eye make-up, moving from iconic pose to iconic pose, she embodies everything great about the theatrical, showy-offy side of metal, doing that 'summoning something' thing with her hands a whole bunch of times and occasionally finding herself engulfed in interesting-coloured flames. Magnificent.

Bruce Banner is fiercely intelligent and utterly fucking livid, a description that could be applied to many of Kerrang!’s favourite bands. Also, smashing a bunch of stuff up and roaring while not wearing a shirt is how half the staff spend their summers.

A reality-warping, energy-manipulating, flame-wrangling telepath, Scarlet Witch could, if she ever wished to leave the world of heroics behind, work in the festival industry as a one-woman pyro team and vibe technician.

An alien who’s a tree and likes to party: oh yes please! There’s as much paganism and Lovecraftian eldritchness (probably not a word) in him as big shorts party times, plus he’s about eight-feet tall – an extremely metal height.

Cats are extremely metal, and a panther is basically the special edition of a cat: metal as shit. “A combination of ancient traditions and modern lasers” is just ferociously badass, and the beautiful Afrofuturism of Wakanda – a high-tech warrior culture – is the kind of richly drawn world that inspires a thousand concept albums.

He shares his name with a Black Sabbath banger that has a metal in the title, he walks around in band shirts and generally has AC/DC accompanying his every move. He also wears bad sunglasses indoors and has facial hair that seems like a real effort – the dude’s clearly a rock star. What’s keeping him off the top spot, then? Well, he’s surrounded by staff at all times, but makes them wear suits. That basically makes him The Man, and not in a good way. He’s a billionaire but enforces a strict dress code – and not a good one, either. Happy Hogan’s not running around in a cloak like a Nameless Ghoul, which is the kind of dress code everyone could get behind. Tony Stark is in the position to make the world around him way more badass and elects not to. Shame.

It was always going to be Thor, really. Long hair, hench as shit, enjoys a drink. Likes throwing words like “portents” around. Somehow Scandinavian, Australian and British all at the same time. Hardly ever seen wearing a garment with complete sleeves. Bashes shit with a hammer, takes a break to wallop shit with an axe, then bashes more shit with a hammer. What a dude.