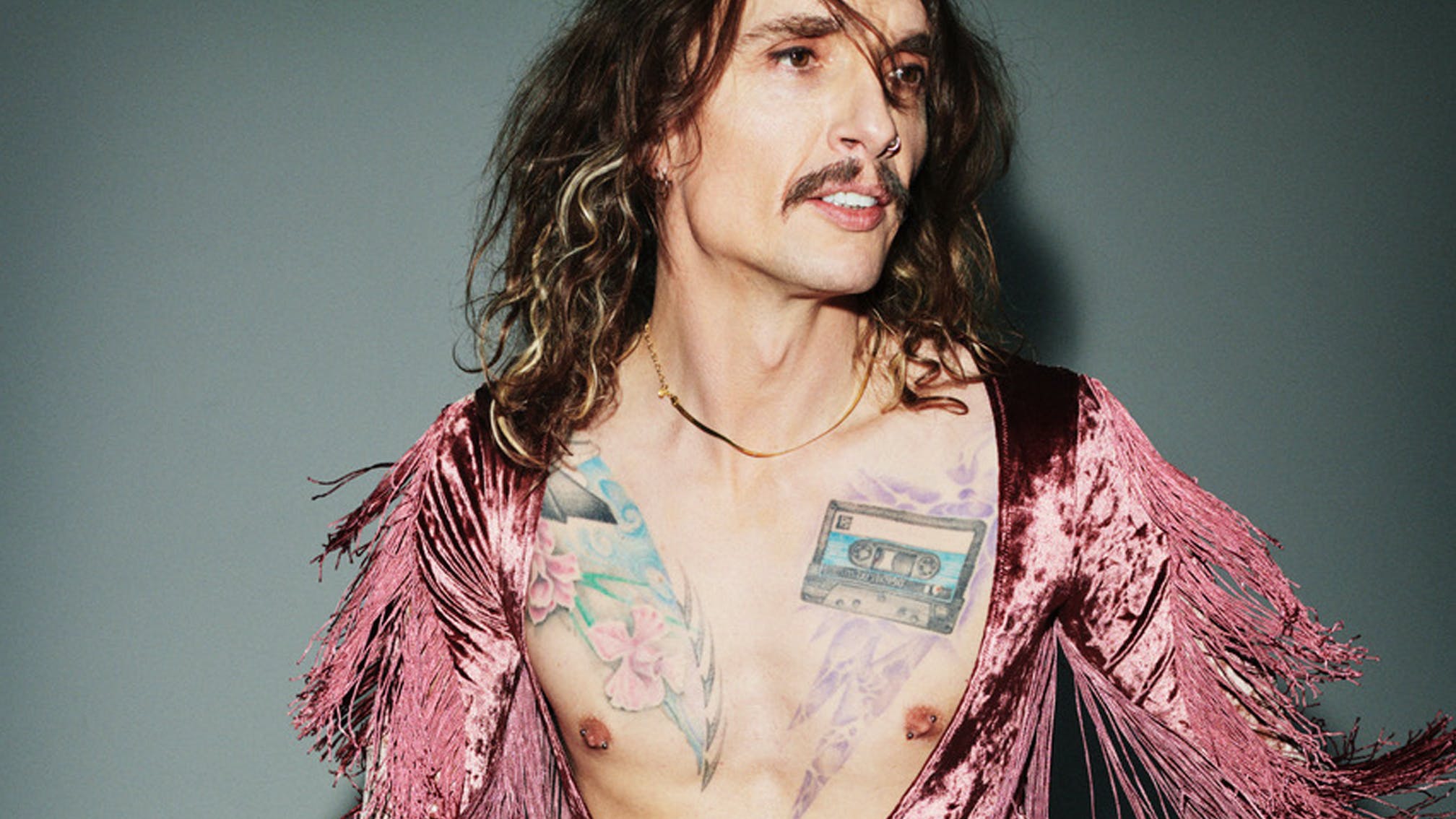 From when he first started to believe in a thing called love to when he was actually considering resorting to robots instead, life in Justin Hawkins’ world has rarely been dull. Having fronted The Darkness for 20 years, the East Anglian legend’s unique voice, disturbingly tight stage wear and eccentric sense of humour have helped produce some of British rock’s most loved anthems.

From precipitous highs to challenging lows, Justin talks us through 10 of the songs that have waymarked his journey to date.

Justin’s life changed, irreversibly and forever, in 2003 when this track became one of the most instantly recognised songs recorded by any artist in decades. But it first emerged on a three-track CD single an entire year earlier…

“It was actually recorded earlier still, in 2001 – in fact, my vocals were recorded on September 11 of that year, the day of the World Trade Center attacks. We created something uplifting on a day that was otherwise full of terror. We’d just trimmed down from a five-piece to a quartet so we’d become this much leaner band while making these songs. It took us a while to work out where we were going, but then it made sense to take on this pop-rock vibe and the song itself came quite easily. I know a lot of people say this about their biggest songs, but it kinda came out of us effortlessly. From inception to realisation was very smooth and you can hear that when you listen to it. It sounds easy, it’s easy to listen to, and it’s fun to play.”

Out of nowhere – or Lowestoft to be precise – The Darkness’s debut album Permission To Land sold millions. This was its breakthrough single and video – but was it really about STIs?

“The secret to Growing On Me’s success was the video. I still think it’s our best. We pulled in so many favours – everything from people who had children to a person who had a helicopter. So we borrowed people’s kids, people’s girlfriends, and a house. I love how the director pulled it together to make it look as if we knew what we were doing, whereas we had no fucking idea whatsoever. People did say the song was actually about STIs. I am disinclined to confirm or deny anything – but I am keen on writing lyrics that mean different things to different people.”

The Darkness almost topped the chart with this, er, seminal Yuletide classic.

“After an intense year we were actually taking some time out, but then we were summoned back to do promotional work because in the midweek chart our song was Number One. We thought, ‘Oh fuck, do we have to?’ Back we came, we did some more work, then it didn’t go to Number One, so we fucked off back on holiday. It would’ve been a nice tokenistic victory but ultimately it’s still one of those songs that’s important to a lot of people’s Christmases. It was supposed to be a bit of fun and sentimentality, but then it also had stuff about bell ends and ring pieces in it, which people seemed to appreciate. Even if some people don’t think about The Darkness at any other time of year, they certainly do at Christmas, and that’s a great thing. The song has done its job.”

There was only one way The Darkness were going to tackle ‘difficult second album syndrome’ – by going big. Its title-track was an anthem to rule them all.

“We were working with our favourite producer, Roy Thomas Baker, having parties all the time and just trying to make a fun record. It was ambitious, but whether it all landed is a conversation for another day. This was a chance to make something that wasn’t as raw or as stripped down as Permission To Land. We knew we’d only get one chance to do that – you can’t go through your career spending £1million on every record. We threw everything at this song, and the album, and working with Roy was a great laugh. We spent most of every day laughing.”

With The Darkness on indefinite hiatus following some troubling health issues, Justin emerged from a successful stint in rehab and poured his energy into this one-off but typically extravagant glam rock project.

“I always felt The Darkness would come back together, but at that time I just wanted to keep my hand in and do something that was more Justin-centric. I was able to incorporate more synthesisers for example; I’m quite fond of synth-rock. The main thing about Cocktails, though, is that it has the word ‘cock’ in the chorus six times; which admittedly is not a particularly non-Darknessy thing, but there’s a very different vibe. I didn’t think there was quite the magic that we had in The Darkness. I love the guys in Hot Leg, but when you stand next to your brother [guitarist Dan] onstage… there’s something magical about that.”

The Darkness reunited in 2011 – and in true swashbuckling style, their comeback single set out to save the world of rock. You could sense the relief.

“It’s actually an old song, and Chris McDougall, one of our original guitarists, is on the writing credits. To get The Darkness going again, in a sense we had to go right back to the start. We didn’t want to introduce loads of new ideas and start arguing about them, having only just come back together. There were some tender wounds that needed to addressed. This is actually one of the oldest Darkness songs to have been recorded, and it felt good.”

Anyone fearing The Darkness might be a fading force 12 years after their breakthrough had much to chew on when a rejuvenated band unleashed this deluge of warrior-class riffage. It has remained right at the top of Justin’s must-play list.

“For me it’s got to be in the setlist. It’s one of the first names on the team sheet. There are songs from Permission To Land, which we rotate, but for me this is essential. We wrote a lot of that record at Frankie’s [Poullain, bassist] brother’s place on Valentia Island [in County Kerry, off south-west Ireland]. It’s close to where they filmed some of the most recent Star Wars trilogy, the place where they find Luke Skywalker living [Skellig Michael]. It’s an amazing, inspiring place – we’d stand there looking out to sea, thinking about Vikings. Barbarian is about what happened to King Edmund. He tried to be diplomatic and give the invaders land and horses, but they chopped off his head and booted it into the forest.”

Having survived the highs and lows of a fickle music business, Justin took mischievous aim at industry detractors in this belter.

“People try to stamp their authority on your creative output by ‘A&R-ing’ it. It’s not merely offensive; it’s plain wrong. You’re supposed to be an artist, but you’re constantly being told this should be a single, or that shouldn’t even be on the album, and you end up thinking, ‘Who the fuck are you?’ We had some great experiences in the early days, but the longer your career goes on the more you realise how lucky you were. Solid Gold is about all of that – it’s about past, present and future. It’s saying to the industry that we’re going to carry on doing what we’re doing, and you can basically fuck off if you don’t like it!”

This high-octane, high-pitched rocker helped keep the band’s candle well and truly flaming. Even its apparently ludicrous subject matter turned out to be eerily prescient…

“We were on tour and it seemed like the pandemic was following us. When we got to Australia we knew we couldn’t finish the tour because borders were being closed. We had to call if off and get back to our families before everything got locked down. It’s funny how that song turned out to be so prophetic, lines like, ‘Spreading disease so they can sell the cure’ for example. It’s so weird how it all played out. I often joke that the next album’s gonna be called Justin Hawkins From The Darkness Wins The Lottery!”

Sex with robots! It’s the theme of new album Motorheart’s title-track, and despite it all being very silly indeed, Justin has clearly thought it through…

“It was hard to have intimate relationships during lockdown, so there was the thought of using various contraptions to assist you on those cold winter evenings. People were looking for companionship, or more. A lot of people were buying dogs, for example, many of which are now sadly being re-homed. So I thought, 'Let’s just get some robots.' I was picturing someone who is super-disappointed about how his relationships have gone and in frustration turns to a robot. Unfortunately, the same problems begin to manifest. He refuses to admit that it’s his fault because, like me, he’s a dumbarse. Because we worked remotely, our individual ideas came in more fully formed, so I was able to get more of my fun concepts going.”

Motorheart is out now via Cooking Vinyl.