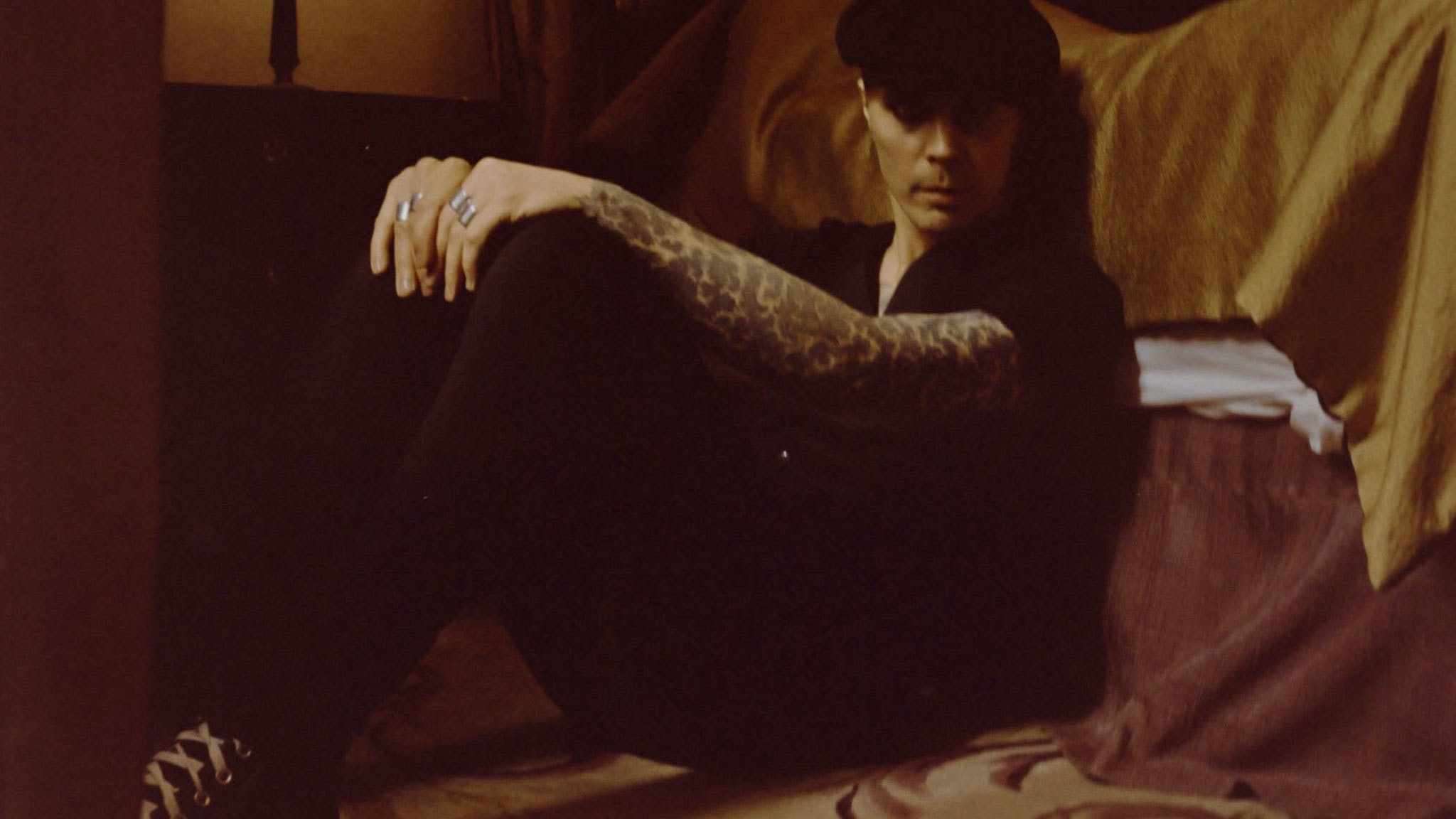 From playing HIM’s first show with a Satanist, to having Tony Iommi check them out at Download Festival, to having Bam Margera organise their first show in the States, Ville Valo has had a hell of a ride. With his VV solo project primed to bring him back to the UK, the Finnish Love Metal God tells his story through the shows that made him…

“Our bass player’s [Mige] big brother had a local venue, well more of a big bar, and we had the opportunity to steal ourselves a support slot for the Finnish Nick Cave, a guy called Kauko Röyhkä. At that time he was dabbling in the occult and Satanism, which was a big deal, because it was when all the churches were burning in Norway. They made this cool ad for the show with his name, and it said ‘His Infernal Majesty’ underneath, but everybody thought because of his dabbling in Satanism, that this was his new moniker as an artist. So, we played to like 30 people, and got semi-drunk before, just because we could, and played about three songs. It was a disaster.”

1997Touring Finland for the first time

“At that time, we couldn’t tour Finland properly as we rented a bus that kept breaking down, so it was more about playing on weekends. We played around 100 dates in a year, which in Finland was a lot – there’s not a lot of clubs. We had a shit bus that broke down every other minute, and it sort of became legendary; us falling out of a moving van completely drunk and all that stuff on the way to every show. It was very important to each one of us, because you have to learn the ropes and you basically become an alcoholic, at least for a wee bit in your life. But we played mostly nightclubs and small pubs in front of 150 to 300 people. It wasn’t bad at all.”

“This was at the LA2 in London. We played a gig right before that in Germany, in sort of a sports arena, and that was our biggest headlining show at that point. All the money that came from that was spent on the tour in the UK, because I knew that nobody really wanted us to come over at that time, but it was important for us to go to the UK. We are devotees to Birmingham, and those places that gave birth to so many legends – it was like travelling to Mecca. I remember we played Nottingham Rock City, right after the Paradise Lost support slot, and it ended up being to 20 people, plus a guy with a dog.”

“It was at a place called Trocadero in Philadelphia and we supported Bam’s brother Jesse’s band, CKY. It was some sort of party for the next CKY video. The skater audience, because they can be so chaotic, they don’t really need to know your songs to get into it, so as you can imagine it was wild. But the weird thing about that trip was we drove over in a van to New York City the next day, and we spent two days there before I went to Madrid to do promotion. I was in an erotic museum in Madrid, when all of a sudden, the whole world seemed to stop – it was September 11. We had gone to New York City just a few days before it happened. And there’s actually a picture of me giving the horns, with the Twin Towers right behind.”

“It was a big deal to headline the Astoria, because it was this legendary, beautiful place. At the time, Bam was talking about us everywhere and started using our Heartagram symbol. I remember Kelly Osbourne was in the audience, and Bam came as well, and he jumped from the balcony during our set. It was pretty wild. That was the time when stuff really started to happen for the band. We had the feeling that we were on the way up – things were starting to finally move along.”

“That was a dream come true. We played third before them on the main stage, just before Velvet Revolver. As I was singing – trying to sing my butt off onstage and being the cocky bastard I am – in the middle of a song, I turned to the monitor engineer, and standing next to him watching us was Tony Iommi. That was fucking wild because I’d never met him, I’d never seen that fella live, and he’s a big, big hero. So all of a sudden him being on the side of stage checking us out was a ridiculous moment. We actually sat down for a wee bit afterwards and it was such a good chat. He’s a gentleman.”

“We called the New Year’s shows our own festival, Helldone, and we ended up doing it for about 14 years. We thought that New Year’s Eve can be one of the worst parties there is because all the amateurs are out in the open and they’re messing everything up. I always thought that the pros go out on January 1, because then, you know, everyone else is dead. Originally, the reason behind it was because of this club in Helsinki called Tavastia, which is a very large venue – it’s like the Astoria. It was a big deal in the early ’90s to be in a rock band and to be able to play in there on New Year’s Eve. It was the gig you wanted to play in Helsinki.”

“After the New Year’s party at the club in Helsinki, on the first of January every year we always went to one of the oldest Japanese restaurants in Helsinki, called Kabuki. The owner was a big, big fan of HIM. He was a Japanese guy who was maybe in his 50s at the time, and he hadn’t visited Japan in about 30 years. So we decided to take him with us, and he was our guide and translated as well. He took us to the 28th floor of this building, and when the doors opened it was the greatest karaoke bar ever – everyone was singing songs from [Guns N’ Roses’] Appetite For Destruction. I experienced my first earthquake on that tour as well. I remember waking up slightly hungover, and everything in my hotel room started to shake like crazy. It felt odd, especially with the hangover.”

“We played really early in the day, and it was the first festival run I did completely sober. It was a nice experience just to be clear-headed, but I hate playing in the sunlight. I’d always rather play the smallest tent, just to be able to have a bit of a light show and get a bit of mood and darkness going on. It was hot as Hell on most days – I remember playing in Denver, where the altitude is really shit for asthmatics like myself, and I was still smoking at the time, and it was really hard to sing. We got to meet Linkin Park, and it was a time where they were all getting sober as well, so we were just sharing our old war stories.”

2014The first solo show, under the pseudonym Rimbo Rambauld

“I don’t know why I thought the title was so cool, but it was me just playing some acoustic covers. I played Solitude by Black Sabbath. I did everything with an acoustic guitar, with a ton of ’70s tape echoes backing me, and it sounded like the sun melting a candle, to be honest with you. I think in music you have to do weird and crazy shit. It doesn’t have to be successful all the time, it doesn’t really have to make sense. There has to be reckless abandon, and it has to have a punk attitude.”

“It was a weird celebration, in that people were quite quiet. I think people didn’t know whether to laugh or cry. I’ve never seen such emotional headbanging before, if those things can coexist. It was pretty special. After the show, I thought that my life was going end, and the next day I realised nothing had really changed. I felt a sense of relief that we were done, and it was the right time as opposed to trying to flog a dead horse. But that farewell tour was a success. There were a lot of people who were still interested in HIM and in the music we played, and it was nice to end a big chapter in one’s life with a smile on your face. It never felt like a job, and never, ever became a chore. So I think those things are to be celebrated, because that’s fairly rare in life to be able to do that.”

“It was interesting to sing in front of a lot of people who didn’t have any idea who I was. Again, The Agents gave me a clean slate after HIM ended. The whole project was so weird, but I’d do it again. I think taking challenges and not going down the safest route is what makes the most sense to me, because it would have been really weird to form another project doing heavier, gloomy stuff, or even doing music sung in English. I needed a little bit of a breather in between, and The Agents was great, as I got to experience the Finnish jazz world.”

VV’s new album Neon Noir is due out on January 13 via Heartagram Records, distributed by UMG/ Spinefarm. Ville Valo will tour the UK in March 2023. This article originally appeared in the December 2022 issue of the magazine.