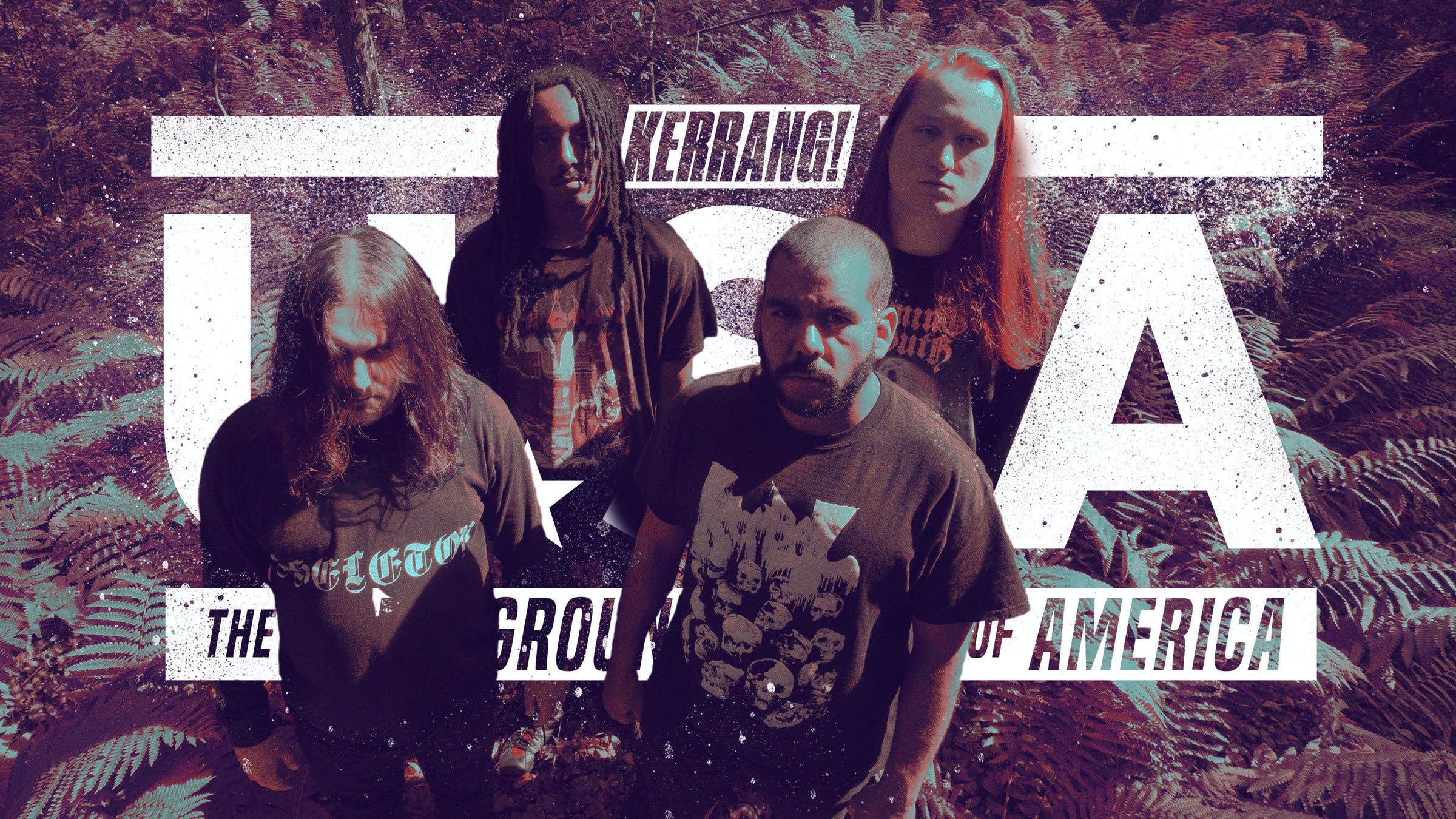 The term ‘old-school’ gets thrown around a lot, but Creeping Death make it feel like more than lip service. The Dallas, Texas-based quartet play extreme metal that walks a fine genre line -- not quite thrash, not quite death metal, just enough growl and just enough groove. This firm middle ground, channeling all the raddest aspects of metal without getting shoehorned into any clichés, has made the band an underground juggernaut, and has earned them slots on high-octane tours like this November’s trek with High On Fire and Power Trip.

According to guitarist Trey Pemberton, the band’s unique attitude is inspired by their surroundings -- and their local heavy metal hero.

“I think most metal guitarists from Texas would tell you that they’re inspired or influenced by Dimebag [Darrell of Pantera] in some way shape or form,” says Trey. “Also, since Texas is so big and far away from the coasts it makes it hard to get out to a lot of major media and population centers. So what people end up doing is just playing the major cities in Texas, usually some combo of Dallas/Fort Worth, Houston, San Antonio or Austin. You play enough and of course you gain influence from your friends and peers around the state, so you end up with this kinda vibe that’s definitely unique to the region.”

The band’s first full-length album, Wretched Illusions, shows off just how much Creeping Death have evolved. Where their previous EP Specter Of War has a more buzzsaw thrash edge to it, the new album channels more of the oozing death metal of acts like Tomb Mold, Gatecreeper, and Steve Tucker-era Morbid Angel (ironic, given that the band’s latest video takes place in an actual cave). In Trey’s mind, the change doesn't stem from an intentional stylistic shift, but just improvement as a band overall.

“I personally don’t think Wretched Illusions is slower than Specter of War,” says the guitarist. “I just think the heavier parts are heavier and the fast parts are faster. Our influences have always pretty much stayed the same, so I think the biggest change came from everyone’s vast improvements on their performances on Specter Of War. We’ve become a much more solid, cohesive unit, and it really shows on Wretched Illusions.”

Emerging from our caves at the sound of blistering riffs, we reached out to Trey to find out if Creeping Death have done the inevitable: contacted Metallica.

1) Who would you say are Creeping Death's five biggest musical influences?

2) If you had to play a newcomer one Creeping Death song to introduce them to the band, what would it be, and why?

Probably Bloodlust Contamination. It’s intense and fast from the start, but it still gets heavy in a way that’s quintessential Creeping Death. It’s the vibe and energy we want to give off as a band wrapped up in a little four-minute package.

3) The old-school VHS production feel of the Bloodlust Contamination video is awesome. What inspired that aesthetic?

Our good friend Cameron Nunez directed that video for us on kinda short notice. We didn’t really give him much to work with, other than we wanted shots of us playing in a studio mixed in with other stuff. Luckily, Cameron is super talented and creative and was able to make it look awesome, so all praise goes to him.

4) If Creeping Death could throw their dream tour, who would be on it?

Metallica would definitely be #1 on the dream list! Some others would be Cannibal Corpse, Obituary, Suffocation, Skeletal Remains and Blood Red Throne as well.

5) About that: you guys are obviously named after a Metallica song. Have you ever met those dudes, or reached out to them?

Nah, we haven’t, we don’t want to be punishers. If we cross paths then we’d obviously be very stoked, but we certainly won’t press the issue.

Creeping Death's Wretched Illusions comes out Friday, September 27, and is available for preorder.

READ THIS: Every Cannibal Corpse album ranked from worst to best

Make sure to catch the band on tour with High On Fire later this year at one of the following dates:

Venom Prison's headline run with Creeping Death and Leeched has been pushed back to October 2021.

Venom Prison, Creeping Death and Leeched will be hitting the road early next year.

At their sold-out New York show, High On Fire, Power Trip, Devil Master and Creeping Death give fans the sacrament of the riff.

What happens when High On Fire headlines perhaps the sickest metal tour of the year? Find out this fall!