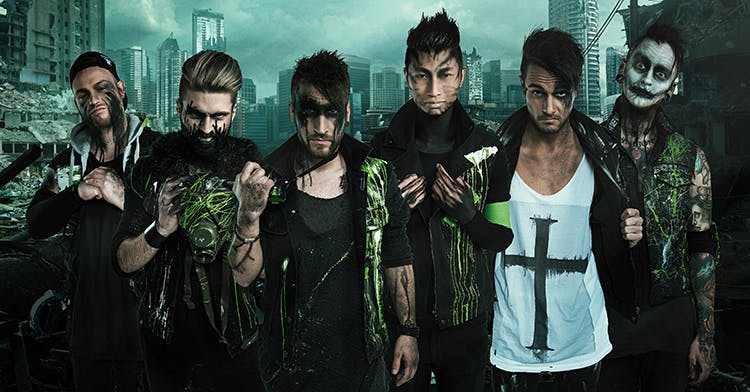 The death of David Bowie sparked a mass reaction within every aspect of music. For The Rats And The Wolves the ethos, influence and persona of the icon spurred them to be the band they are today. Check out our chat with the German trancecore group…

David Bowie was a very inspiring artist for many musicians and fans alike – why was he so inspiring for you guys?

“David Bowie was a huge inspiration for us regarding every aspect of his art. He was one of the first artists pushing boundaries and combining his music with visual aesthetics, plus constantly reinventing himself with captivating personas. Society was way more intolerant back in those days, his visual appearance was strange and compelling at the same time.”

Bowie had many outfits and alter-egos, which was pretty revolutionary at the time (as well as bringing cross dressing into the mainstream and helping make it acceptable!) Do you think this has had an impact on bands like To The Rats And Wolves, as champions of outsider culture?

“We absolutely second that! It’s hard to imagine most artists existing these days without his legacy. He had a huge impact on a lot of musicians, motivating them into creating something new and fresh instead of repeating the same concepts and musical styles over and over again.”

You guys seem to have a very open outlook to life and within your music, pro tolerance; open-mindedness and encouraging acceptance in your fans… do tell us a bit about this?

“Even though we like to party and have a good time, we also want to address more serious topics. Germany where we’re from for example, has a huge dialogue/discussion occurring now about the current situation with refugees. Because of current events (such as the one in Cologne on new year’s eve) most people (especially today’s youth) are tending to support right winged political parties out of fear and frustration, giving bad and intolerant people power without thinking about the consequences. This bothers us a lot and ashamed to see kids listening to core scene music and backing right winged parties at the same time. In our opinion, every individual human being should not only be tolerated, but also respected whatever religion/race or sexuality they belong to. There is still a lot of animosity remaining and we are not willing to join or second this state of mind.”

Were you fans of any of Bowie’s films?

“Of course! The movie Labyrinth is timelessly beautiful and a large part of our childhood. I will never forget the goose bumps his collaboration with David Lynch on Twin Peaks gave me. He was a very charismatic actor, that’s for sure!”

Bowie strived to make his music and life art – is this something that To The Rats And Wolves can identify with?

“Absolutely! We definitely want to be more than a regular band. This is the reason why we started off with a concept, unusual outfits/makeup, a statement and motto fitting our beliefs and attitude towards life.”

Your debut album Neverland will be released physically in the UK on 19th February, what does the word Neverland mean to you?

“Neverland is the evolution of our motto young.used.wasted, and it is the best metaphor to describe this statement. Furthermore, Neverland represents a huge step in our career and musical evolution.”

What does your motto young.used.wasted mean to you?
“It means being wild at heart, do whatever you like and stay young no matter how old you actually are. Most people get caught up in daily life’s shades of grey. Going to work, get back home, sleep eat and repeat. We want to escape from this imprisonment/social dead end and flee into our own fictional world with our own hopes, goals and standards we wish to achieve in life.”

You’ve played shows in Japan, what was that like? And how does the Japanese crowd differ from European crowds?
“Japan was a mind blowing experience for me and the rest of the guys. It’s a completely different culture/world to what we are used to in Europe. The Japanese crowd is a little shyer than the crowds in Germany, but after a couple of songs they warmed up and joined us – singing and partying along with us. To be honest I miss the country and culture already (laughs). We can’t wait to return!”

Will you be playing any live shows in the UK in 2016?
“That’s the plan but we can’t divulge anything yet. We love to visit other countries and get to know new people and bands. Plus the UK has always fascinated me immensely (for example it’s punk roots)! So let’s hope we will have the opportunity to raise hell with you guys as soon as possible!”

To The Rats And Wolves new album Neverland will be released physically on 19th February via Arising Empire. You can pre-order the record here.

"The punx went to Mars!" says YUNGBLUD of his Life On Mars? cover soundtracking NASA's Perseverance Rover landing on the Red Planet.