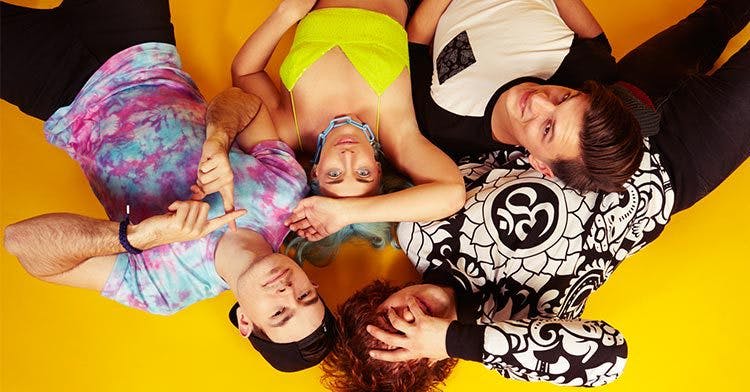 Vukovi are streaming their brilliant debut album exclusively with Kerrang!

Their self-titled album isn’t set to be released until March 10 (Friday), through LAB Records, but you lucky lot can stream it a few days before its release! Pre-orders are still available click on the links to get yours now: Physical and Digital. On top, of that vocalist Janine Shilstone has written a track-by-track guide to each song on the album – scroll down to read.

Listen to Vukovi below:

Catch Vukovi live at the following:

Vocalist Janine Shilstone sat down to write a track-by-track guide to each song on the album, check it out below:

“The song was written one night on garage band when I was drunk. I fired it over to Hamish to see if he could work his magic on guitar over it but we seemed to put it on the back burner for a while.Something kept niggling me to go back to it.I remember the moment; me and Hamish in my flat drinking pretentious cocktails, laptop, tiny amp, Hamish’s guitar. It just sort of came together at that point. That was the moment we were like “fuck, this could be our next single!”

The song portrays an abusive relationship unbeknown to the victim but in time there comes a point where enough is enough. There’s a lot of emotions through the song, I feel vulnerable, but also come across confident and in control at times. I read a lot of the Batman comics when I was younger and I can definitely see a Harlequin/Joker relationship reference in this track.”

And He Lost His Mind

“This track is riffy and raw. I don’t want to go into too much detail about what it’s about, other than the music industries drug problem. It’s frantic, it’s boisterous, I think it shows off the boys’ playing ability amazingly and that outro with the whammy guitar sounds so dirty I want to wash after hearing it.”

“This is probably the most poppy song on the album. It’s melodically dominant and upbeat. I wrote Weirdo to encourage people to stop being ashamed of their quirks, their interests, the way they look. At school you think it’s the end of the world when people laugh, comment and target you for being different. Now I’ve realised over time these people target you because you’re a threat, you’re interesting, and when they look at themselves perhaps they realise they’re pretty boring. I know everyone says it, but the majority of the time it’s jealousy.”

“This is a track we wrote when we first became a band. We always felt it never got the recognition it deserved, and it always goes down well live. It has been completely reinvented for the album, and I think you can hear the Bring Me the Horizon influence in this one with the heavy synths. It’s the shortest track on the record. I wrote it after we got our first bad review as a band, which I took quite badly at first! So this song was the perfect fuck you to negativity, which made me realise I had to start growing a thicker skin in future.”

“Prey reflects on a time in my life where I was in a pretty dark place for various reasons. I thought at the time that I’d met my “knight in shining armour” but in reality he blatantly preyed on my vulnerability and fucked me up even more. The song was originally quite a bit faster until Bruce (Rintoul, our producer) said to take it back a few BPMs for a more euphoric sound. I couldn’t agree more after hearing the final result. Melodically we do “Low verse, high chorus” a lot, but think it worked particularly well in this song. It’s definitely one of my favourites on the album.”

“This track was one of the singles we released in the run-up to the album. We re-recorded everything for the album, but didn’t want to drastically change this. We’ve noticed that with the tracks that have been singles, i.e. Boy George, Bouncy Castle & Animal, there’s only been minor changes that we sort of naturally did when playing them live over a few months on tour. So of course, we got the chance to put those changes in permanently when re-recording them.The main influences for this track I’d say are Foals and Florence and the Machine. Random combination, I know.”

“I never liked this song but was overruled in a majority vote. Bruce kept telling me he’ll convert me into loving it. Reluctantly, I have to say I cried the first time I heard the final mix of this. I think it has an Incubus meets heavy The XX sound to it. My younger brother lost a close friend to suicide a couple of years back and this song is a gift to my bro. His friends name was Andrew: anagram of Wander.”

“This has been, and still is, my favourite track. It’s dark, it’s intense, but has this almost trance-like vibe to it.Before we even decided on tracks for the album, we always agreed we’d pick one track each that had to be on the album, and nobody could contest it. This was my song. I wrote it to trying to describe being in a relationship with severe depression and trying to express that you need that person, even though you don’t show it most of the time.”

“This was another track I wrote when drunk on GarageBand. It sounded super simple when I sent over to the guys. Then I remember coming into practice after they’d been working on it and was completely blown away. I love the punky, QOTSA-vibe to it. Lyrically, it’s about karma and its animalistic ways of working. Take what you want from that…”

“Again, Boy George is a previous single we re-recorded for the album. It’s riffy, full of attitude and great fun to play live. It’s been so good having Bruce on board as our producer and engineer as he didn’t worked with us on these aforementioned singles previously. I really feel he’s brought them to life for the album, which I hope our fans appreciate.”

He Wants Me Not

“This is another older track, like Target Practise, that we felt never got the recognition it deserved. I love the super-simple, chunky as fuck riff. I think the chorus in this song is the best chorus we’ve ever written, so naturally we felt it had to be on the debut album. Lyrically it’s about being fucked about by someone you’re so into who keeps changing their mind whether they want to be with you or not which can be so frustrating.”

“This is a total curve-ball to the album, but it’s always been a favourite of ours. Even though we initially wrote it a couple of years ago it’s always been a unanimous decision that it has to be on the album. The song symbolises dying love for someone, whether they’re alive or no longer here. I always imagined it on a Disney film for some reason. Vukovi and Disney? Nah.I made Bruce cry doing vocals for this which I thought was funny at first, until about an hour later when I came through the listen back and felt this overwhelming urge of tears. I felt my eyes watering when Bruce turned around to ask me something and we both burst out laughing. We’re so happy with how our debut album turned out and it’s been a long time coming. We really can’t thank Bruce Rintoul enough for taking this record to the next level and completely exceeding our expectations.”

VUKOVI drop fierce new single KILL IT: "A battle cry to the war that’s going on inside my head"

Listen to VUKOVI's powerful new single KILL IT – a song that Janine Shilstone calls "a war cry to my OCD demon".

Listen To Vukovi's New Track All That Candy

Bring Me The Horizon have recruited Sleeping With Sirens for their only UK show of the summer.