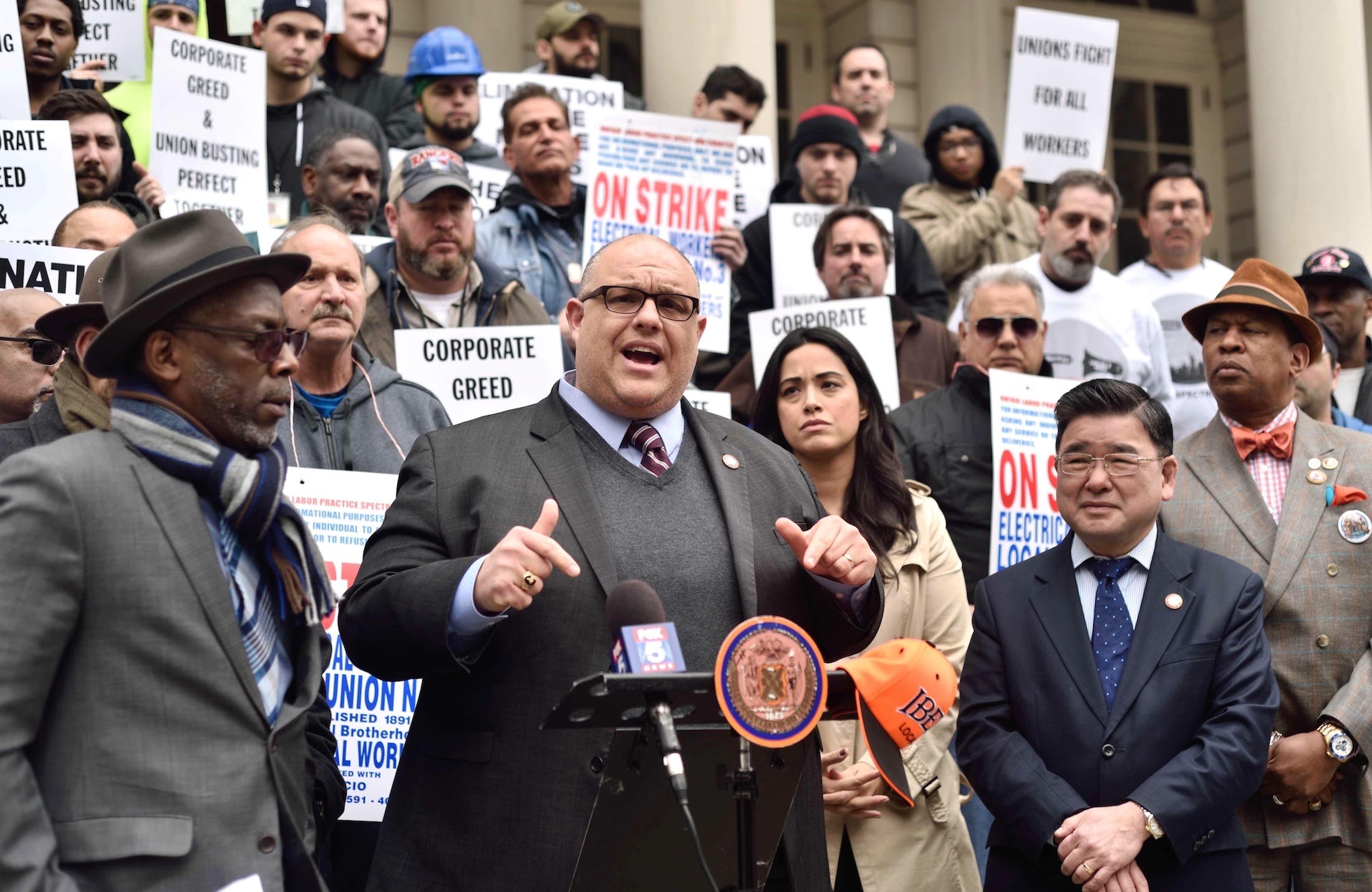 Most Kerrang! readers know Justin Brannan as the guitarist for legendary New York hardcore bands Indecision and Most Precious Blood. But to the citizens of District 43 in Brooklyn, New York, he’s respectfully known as “Council Member Brannan”, thank you very much.

We first learned of Brannan when he was elected to the New York City Council, and he made headlines again after recently introducing a bill in his district to prevent ticketing companies from charging concertgoers with sneaky hidden ticket fees. That’s a platform we can certainly get behind.

With Kerrang! finding a second home in Brooklyn (where our newly-minted U.S. office is based), we decided it was time to get to know our neighbor a little bit better. So we chatted with Justin about his background in hardcore, politics, and the myriad ways in which they intersect.

(Interview has been edited for length and clarity.)

Kerrang!: Had you always planned on eventually running for office?
Brannan: As a teenager, I was involved in animal rights activism, and followed the tail end of the first wave of AIDS awareness – I was going to protests, and plugged in to all these causes, but I never really made the connection to electoral politics.

It wasn’t until later, after the band, when I started working at a radio station – I ended up doing some union organizing and everything started to make sense towards this road that I found myself on. I realized that local government was where you could actually get stuff done. You could actually help people in real time, so that certainly inspired me.

I understand that in between tours, you also worked on Wall Street for some time. Coming from a hardcore band, fighting for social justice, wasn’t working on Wall Street a bit of a stretch?
Well, I was never interested in finance. A lot of starving artists took jobs working on Wall Street because it’s a place where, at the time, they were hiring clerks, or whatever. For one job, I worked like, five floors below ground in the bank vault. These weren’t highfalutin jobs!

Ha, got it.
Bear Sterns was the one place where they didn’t care about your Ivy League degree or any of that bullshit. They care about if you have heart and a desire to succeed. It was an unorthodox kind of culture, so I fit in because I was there with a bunch of other misfits, you know?

But what was really interesting was – having been there for the whole financial collapse – realizing that a lot of Wall Street getting demonized is certainly warranted, but the amount of people who lost their jobs who had nothing to do with the financial crisis was really extraordinary. I mean, everyone from the guy who serves the food in the cafeteria, to the custodians. All the support staff weren’t part of any Evil Empire, but they lost their jobs, too. So that inspired me to fight for the little guy.

I guess it feels like the stuff [in my life] happened for a reason. It just kept pushing me towards the path where I ended up.

Speaking of that path, how did your former bandmates react when you made the decision to take the leap into politics?
Some of them would jokingly call me the Mayor of Bay Ridge – which is one of the neighborhoods I represent – just from knowing a lot of people in the neighborhood. I don’t think they were that surprised that I ended up doing this.

The hustle in an underground band is not that much different than the hustle when you’re running for office. The same way I used to hand out flyers for a show that we were playing at CBGBs, now I was standing outside the subway handing out cards with my face on them, saying “vote for me.” It’s the same approach: that DIY self-promotion, getting your name and your message out there. To some folks it seemed strange that I went from being in a hardcore punk rock band to running for office, but there’s so many similarities, it makes perfect sense to me!

Before we get deeper into the similarities between both careers – when you were running for office, did you have to do any conscious re-branding before stepping out into the political arena?
(Laughs) No, I mean, I never tried to hide who I was. Everyone knew I was in a hardcore band. Everyone knew that we weren’t doing Lionel Richie covers, you know? But I think people knew me as the go-to guy in the neighborhood to help get things done. They knew that I was a musician covered in tattoos, but they didn’t know me first and foremost as that guy. It’s a part of who I am, so I just owned it and knew that I was gonna take hits for it. People tried to mischaracterize me, tried to take things out of context and… you know, with some of the imagery that [my bands] had out there, I made it quite easy for them to do that. My opponents certainly did try to make me out to be some creep devil worshipper, which I thought was really adorable.

The attack ad that the Catholic Warrior League ran was pretty ridiculous.
(Laughs) Yeah, that was hysterical, but I knew that was coming. Ten years ago when I first started getting involved in politics, all that stuff was something that I knew was gonna be an obstacle.

I’m someone that has had his up and downs. A lot of people that I went to high school with, they’re dead or they’re in jail. A lot of them are doing really well, a lot of them didn’t do very well. I’m just a regular Brooklyn kid that came up in my neighborhood, and I care about the district. That’s the person I tried to sell, [not] a guy who had planned on running for office since I was ten years old, checked off all the right boxes, joined all the right clubs, and said all the right things. I tried to present myself as a real person who cares about his neighborhood, who made mistakes and has lived life just like anybody else. And I think that in our political climate, people are looking for realness and sincerity; they wanna feel that they have someone representing them who has gone through the same things that they’ve gone through. I think the days of people clamoring for politicians that were seemingly hatched from eggs and never jaywalked, those days are over, thankfully.

And I would also assume that your hardcore background would give you more strength to stand up to political adversaries or critics?
Oh, absolutely. You know, I spent a little time as a fundraiser for a couple of humanitarian non-profit organizations, and I can draw a straight line from my days sleeping on floors in bass country to sitting at the Four Seasons across the table from the donor I was trying to get to donate a million dollars to a charity I was working for. I think having been a hardcore kid and coming up that way it certainly gives you a sense of fearlessness that you see everyone as your equal, and I don’t think you’re intimidated by people. I wasn’t really afraid of anything.

Most Precious Blood live in 2016

Hardcore must have taught you how to fight for your political beliefs, too, I bet?
Hardcore started with a bunch of restless and creative kids looking to get their message out to the world. We didn’t have anyone to show us how to do that, so we had no choice but to figure it out as a crew. I don’t think anybody wanted DIY [do-it-yourself] – there was just no one to show us the way.

When Barack Obama famously said ‘If you're disappointed by your elected officials, grab a clipboard, get some signatures, and run for office yourself,’ I mean that is the DIY spirit.

And does your touring experience make you a better civil servant, too?
Having been to 50 countries across five continents, I think those experiences certainly broadened my horizons. I think you become more accepting of multiple perspectives and you embrace the differences. Traveling the world, encountering different cultures taught me how to learn from other people; how to respect other viewpoints. I think I turned 18 when I was on tour in Germany for, like, the second or third time!

Most people don’t understand that hardcore not only encourages the community to fight back and stand up for what’s right, but also be more understanding of people.
Oh, absolutely!

You came to our attention for introducing a bill to combat hidden ticket fees for concerts. Do you plan on introducing any other music industry-related legislation while in office?
I mean, if anyone’s gonna do it it’s gonna be me. It’s definitely on my radar. Hopefully if people see that I’m flying the flag for this kind of stuff they’ll come to me for other ideas that they have.

You’re clearly enjoying the work you’re doing now, but have you thought about eventually running for higher levels of office at the state or federal level?
I think it’d be fun, yeah. There are other offices that I thought about running for, or that people have suggested I run for, but I really ran for the office that I wanted. Because I love New York City, and love being a small part of the machine that helps it work. So, I’m open to whatever. As long as it’s somehow tethered to New York City I think I’d consider just about anything.

Maybe we’ll follow up with you in a year and see where you’re at with that.
(Laughs) Right on, man.

Perhaps most importantly, are you still playing any music?
Yeah, Indecision still plays maybe once or twice a year. We still do charity shows, fundraisers. And it’s a bit easier for Indecision to play because all of us, except for Rachel, live in and around New York. The Most Precious Blood diaspora is all over the place. Our drummer lives in Australia!

Any chance we’ll run into you at a show – even as an attendee?
If there’s a band I wanna see, usually it’s ’cause I want to go hang out with a band that we used to tour with that I haven’t seen in forever. That’s always cool. I spent ten years of my life touring the world with some of these bands, so seeing them again is always fun.

Did any members of those bands follow a path similar to yours?
You’d be surprised, man, there’s a lot of folks who were involved in the scene that followed their hearts into politics and non-profits. We have a little page on Facebook called “Policy Punks,” and it’s probably like a hundred of us who were involved in the scene – not just New York, but all over the country – that are now doing some sort of political or policy work. It seems that listening to Dead Kennedys and Napalm Death all those years had an impact on us, and we’re trying to make the world a little bit better… even though we’re getting old.