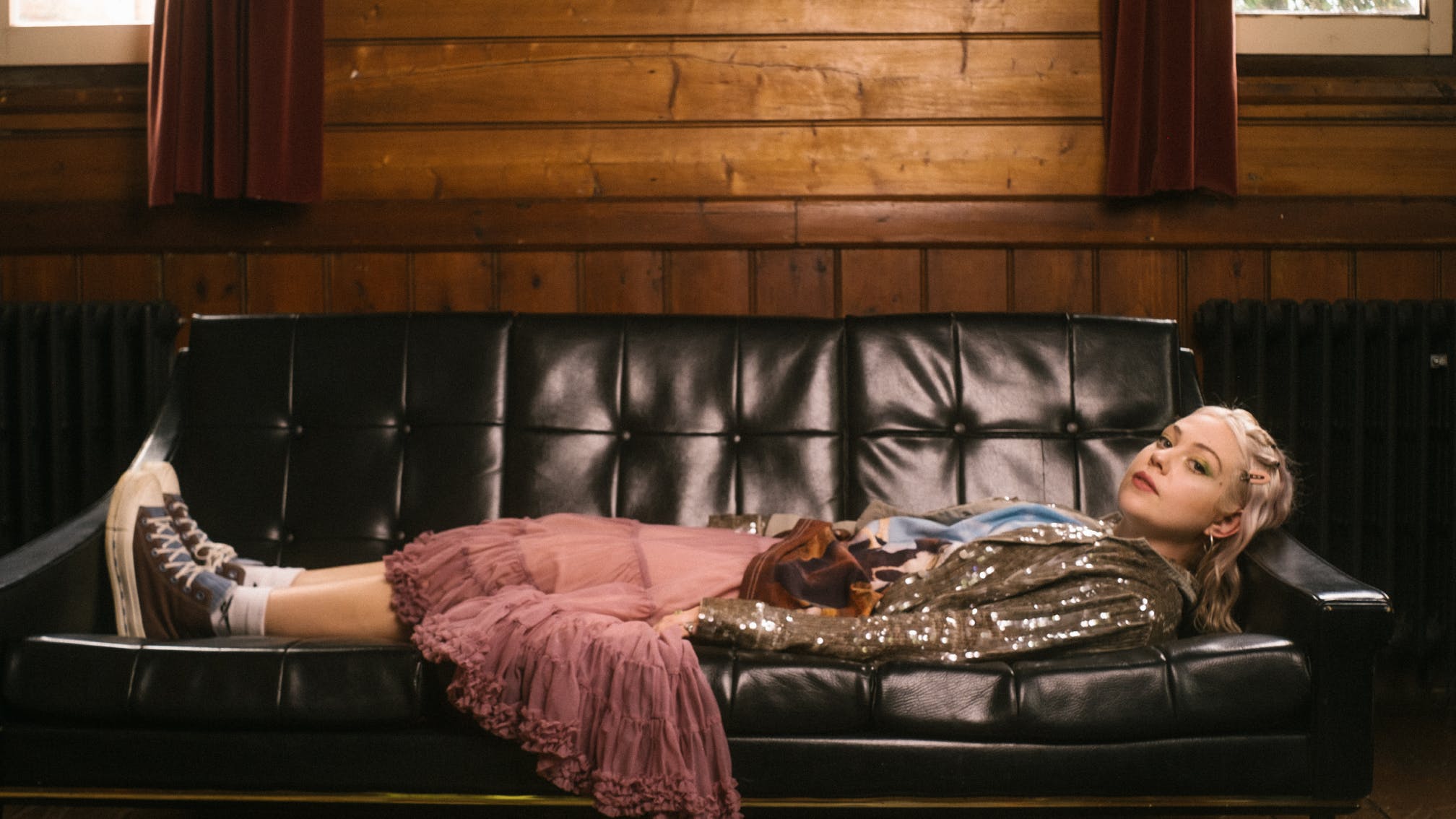 “It’s really the bane of my life,” Lauran Hibberd laughs, reflecting on an incredulous moment that would become a lifelong nuisance: her name. That’s right – it’s Lauran, not Lauren. “My dad spelled it wrong on the birth certificate. It's not intentional, but I'm 100 per cent sure my parents must’ve had a big fallout about it. Imagine, my mum’s just given birth to me and he’s gone and messed up his one job!” Sure, there are bigger issues out there… but you want to have your own name spelled right. And that’s the thing with Lauran: it’s the little details that really matter.

It’s Thursday afternoon and the singer has been spending most of her day scrawling her signature onto prints, which is apparently “very painful on the old hand”. Taking a break from the oh-so-taxing life of a musician – “I think I've got repetitive writing syndrome. Maybe I've got carpal tunnel…” – Lauran catches up with Kerrang! for the latest instalment in our Who the hell is? series, spotlighting the very best in new music. Ahead of the release of her upcoming debut Garageband Superstar, the slacker pop darling spills the beans on everything – from being “uncool” to falling off roller coasters (but not really)…

What made you first want to pick up a guitar and start writing music, Lauran?
“Growing up, I was led by whatever was on the radio. I wish I had a cool musical childhood; I wish my mum was playing The Beatles, but she was actually just playing MIKA! I started playing the guitar at 13-14, because I was just looking for a hobby. I never wanted a normal job, so I picked up a guitar, and fancied my guitar teacher – which enticed me to keep going to my guitar lessons, and then it all became a lot deeper than a connection with the guitar teacher. I fell super in love with playing the guitar, and I found all of my favourite bands – Weezer, Green Day, Smashing Pumpkins – through it.”

Did you see music as a cool escape, then?
“I wanted to surround myself with people who I thought were cool. A guy in a leather jacket playing the guitar is cool, and that’s aspirational for a 13-year-old girl. I wanted to be like that. I've realised that I'm so uncool and have been since the start, and I'm alright with it. It's cool to write and record an album. It's cool going on tour. I'm not cool, but I do have a cool job!”

Your music is packed with character. Do you find there’s a separation between the musician Lauran and the real Lauran?
“One hundred per cent. It's not something I've thought about, but it just naturally happens. When I walk onstage, I become this hyper version of myself, which I would love to be all the time. I have to be in that headspace to feel that way and to have that frontman-style energy. There's a big separation between who I am when I'm crying at Netflix at 11 o’clock at night, and then when I'm onstage or writing songs surrounded by musicians.”

How did you craft your comedic storytelling style in songs?
“At the start, it was [subconscious]. I like to make people feel awkward and I hide my pain in jokes, and that does seep into the way I write because that's how I see life. When I'm writing lyrics, I can't help but squeeze a little self-deprecating joke in there because I've just said something really painful. That's just how I am and how I pour everything into what I do. Now I can't escape it, I'm just so riddled with humour!”

Some things have to be light-hearted, after all…
“It's good to not take yourself too seriously. I'm not trying to change the world. I want to be a voice for the people that don't have big things to say. Not all of us are here thinking, ‘We're gonna leave the world and everything’s gonna be different.’ Some people are just like, ‘Oh man, I wish I had a sugar daddy,’ or, ‘Why is that guy taking a picture of his car again?’ It's little things that you think to yourself every day that you wouldn't necessarily put in a song. I like to write about those small moments because everyone has those, and I don't think that's spoken about enough.”

Did growing up in the Isle Of Wight inspire you to write about these kinds of moments?
“When you turn a film on and they play a three-minute song and there's graffiti on the wall, a boy riding a bike, someone's mum shouting at them, a couple having a scrap outside… all these intro shots before the film's even started, that’s real life and I like writing stuff about that stuff. I write about living on the Isle Of Wight. It isn’t crazy different to anywhere else, but there's that seclusion that drives you to this weird boredom. It does make you create, and you've got nothing but your imagination. I get into the weird corners of my mind and I think, ‘What if I fell off a rollercoaster? How bad would that hurt?’ It's those thoughts that you wouldn't normally say to anyone.”

You’re currently working towards a big moment: the release of your debut album, Garageband Superstar. How are you feeling about it all?
“I'm excited – I really am. It does feel like a big deal. I've been working on it for quite a long time. I'm a bit nervous because it has been this little secret between me and, like, 12 other people who know everything about it. It's a bit weird – it’s like if you're gonna dye your hair a different colour, and only you and the hairdresser know what it looks like, but then you've got to walk in the house and get your mum’s opinion on it. It's kind of like that: what is everyone gonna say?”

You like to describe yourself as an ‘album artist’. What does that phrase mean to you?
“In an age where we stream singles and we skip a lot of tracks, I still go out and buy records. I love listening to things from start to finish. I really, really got into music after listening to Weezer’s entire discography. Now, having to make an album of my own, you're building up this kind of portfolio of songs that fit together. You have this thing which is similar to what you did before, but is also evolved and different. I would love to be 50 and look back at all the albums I've released and go back to where I was at that point in my life.”

What are your favourite lyrics on the new album?
“Oh, this is a good question. It changes so much. I'm really proud of the track Still Running (5k): ‘All my friends have moved away / I don't know why, but I chose to stay / I'm still running the same 5k.’ Imagery-wise, I managed to write a song about running, which actually has nothing to do with running! And then there's that massive metaphor for actually living on the Isle Of Wight and watching everyone else go off and do something, and you think, ‘Maybe I shouldn't still be here, running the same 5k every day.’”

Have you started thinking of ideas for the next record yet?
“I was getting to the end of writing this album, and I had the idea to change the entirety of it two weeks before recording. I'd almost moved on past that point and started writing something that I was on the edge of my seat about, so my manager said to just chill out and leave that for our second release and just go with what we've got for now. I'm really excited about it. It's a little bit darker and a bit heavier. I would never have expected to make something like it.”

What has been your most career-defining moment so far?
“I feel like it was at Reading & Leeds last year. Coming out of lockdown and playing Reading & Leeds for the first time and surviving being an artist at that time. I'm not sure if it was a career-defining moment on paper, but for me as an artist, it really cemented what I was going to do and how much I was going to go for it.”

Finally, what’s next for Lauran Hibberd?
“I want to tour as much as possible because it's my favourite thing to do in the world, as well as keep writing songs, keep putting out albums, keep telling bad jokes, keep watching short films, and make people laugh all along the way. Maybe another person will pick up a guitar and fancy their guitar teacher because of me.”

Who the hell is?Lauran Hibberd

From DMing DJ Lethal to dumping someone and buying a PS4, Lauran Hibberd tells the stories behind every song on her debut album, Garageband Superstar.