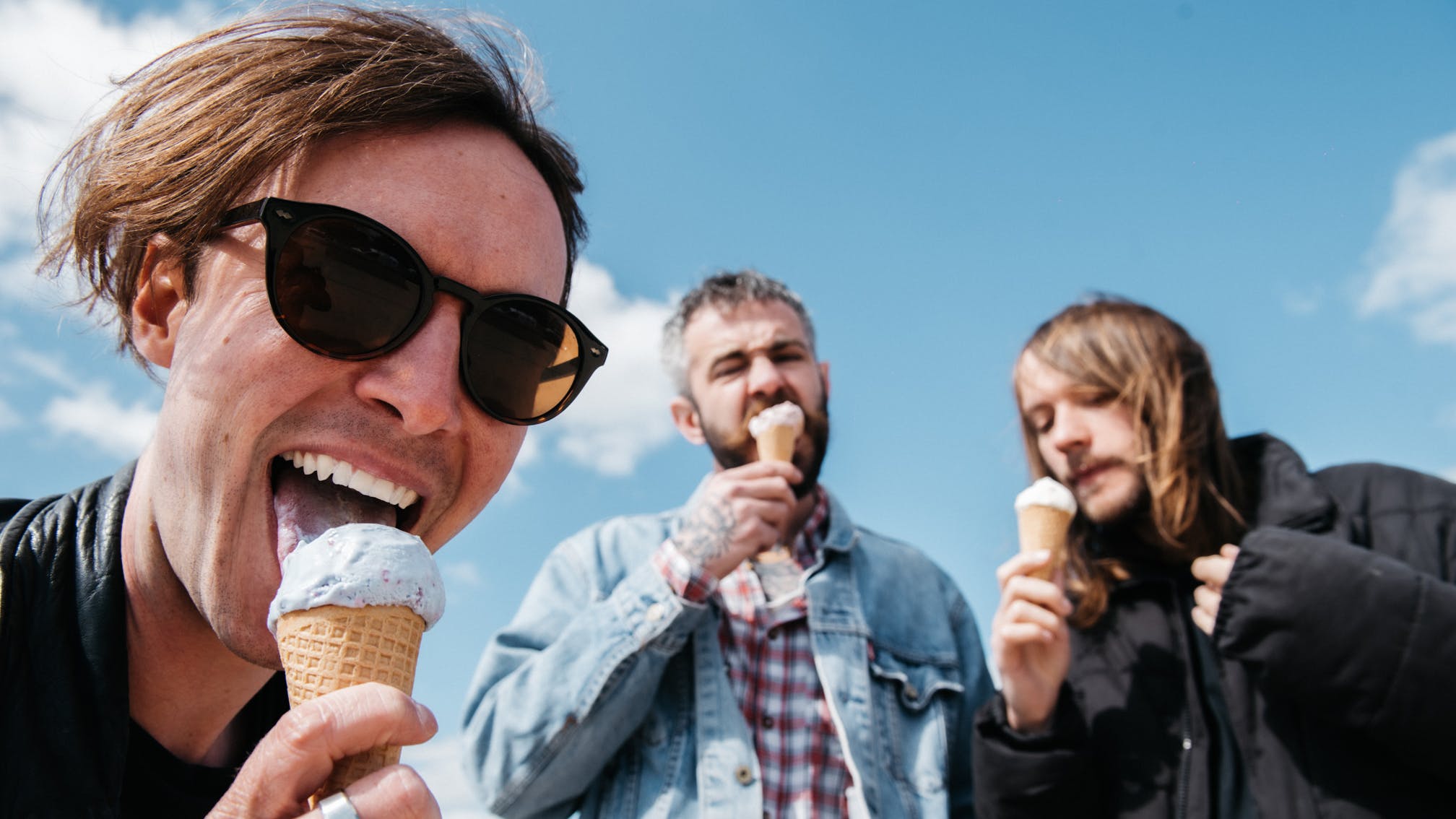 Tom Harfield has consumed perhaps 50 self-help books over the past couple of years. A deep, pensive personality away from the stage, the GLOO frontman is obsessed with the idea of self-improvement and the ongoing quest to be happier. He brandishes a copy of Susan Cain’s Quiet: The Power Of Introverts In A World That Can’t Stop Talking from a shelf in his bedroom early in our conversation on this balmy Wednesday evening, before extolling the brilliance of Eckhart Tolle’s The Power Of Now: A Guide To Spiritual Enlightenment slightly later on. Flashing a wry smile, however, he acknowledges that none of said volumes have ever been so life-changing that he’s not felt the need to pick up the next…

“I’m just interested in leading a better life,” he shrugs. “And because I am introverted, rather than talking about it, I’ll just read…”

A theatrically staggered splutter of laughter comes from the third window of our four-way Zoom meet. Tom’s older brother – and GLOO drummer – Mark is an amusing opposite. Flashing his bright eyes, bone-dry humour, and a spectacular moustache, he comes on like a trendier, less snarky version of Paddy Considine’s Detective Andy from Hot Fuzz: “Mate, I’ve not even read 50 books!” Meanwhile, pushing long hair out of heavy eyes and reclining after a long day at the office, bassist Simon Keets just chuckles, happy to watch the familiar brotherly banter unfold.

This finely-balanced blend of fire and ice, philosophy and piss-taking is key to the magic at the Sussex trio’s hearts. As their endlessly good-natured, often unpredictable, peculiarly masculine chemistry (“Don’t cry, ever,” Mark probably only half-jests) fizzes away over an hour-long chat, it’s clear that music – and the camaraderie of this band – is a safe space where enjoyment is unconditional.

Having convened to discuss upcoming second album How Not To Be Happy, the band are quick to stress that although there’s plenty of grunginess in their sound, and room for darkness in their wry worldview, there’s nothing miserabilist about the music. Picking up where they left off with summer 2018’s debut LP A Pathetic Youth and 2019’s Stop And Stare EP, HNTBH’s 10 tracks chronicle the pratfalls and unfulfilled expectations of early adult life in 2021, but such is their springy energy and defiant attitude that it’s impossible to take them as anything other than an escape. Even the agonising process of trying to record and mix with Brighton producer Jag Jago around last year’s local and national lockdowns (“Writing an email with things in a mix you want changed is more frustrating than you can believe,” Mark shakes his head. “Like, ‘Two minutes 53.7 seconds, can you EQ this…’”) is ultimately laughed off.

“If it’s too serious, we lean away from it,” Mark explains. “Not because it’s cringey, per se, but because we’re not the most serious group of people and we don’t want to find ourselves having to pretend. If we go onstage and start singing about dark clouds we’re having to [play a role]. We do have heavier songs, but it tends to be that our heaviest-sounding songs are our stupidest. Like how Big Smoke [a dissection of the grass-is-greener fantasy of big-city living] sounds heavy, but it’s all about flying kites and stuff. The more serious ones, like Permanent [a poignant break-up song which repeatedly asks ‘Is this really permanent?’], sound like fairground rides.”

“It’s not necessarily that [lightness] comes naturally,” nods Tom, “but it is the thing that we love. We get rid of songs if they’re not 100mph and angry, because that’s the stuff we enjoy in the room.”

Indeed, How Not To Be Happy simply doesn’t let up. Pouring surging power pop, gritty punk-rock and hoarse post-grunge into the mix, and influenced by the outlaw swagger of old-school heroes like AC/DC and The Stooges, it’s an immediate, infectious, unassailably cool blast of colour and emotion. Full-throttle opening track I Can’t Hear Myself Think wrestles against the overwhelming noise of everyday life. Ride is a spring-loaded ode to life on the road away from the 9-5 rat race. Swimming In Your Sea is a ragged slow-burn love song that surfs easily over some squalling guitars. Hell, the likes of mid-album banger Takes The Piss and semi-acoustic closer Rizla are the sort of brilliantly unselfconscious cuts that could’ve come from fictional English hellraisers Infant Sorrow.

“These songs became almost like a self-help manual to myself: talking shit and having fun and not getting stuck in a rut,” Tom reckons. “Even if someone picked up this album expecting it to be depressing, these songs just aren’t. It’s a record that makes you happy when you listen to it.”

“A guy in [shady south coast nightspot] Bar 42 once told me we ‘sound like Nirvana, but minus the depression,’” adds Si. “I quite liked that.”

Coming up in the faded seaside town of Littlehampton, taking things too seriously was never really an option. “It’s a place where you’d get laughed at for wearing dungarees through the town centre,” Mike gestures, illustratively. Twenty miles east of Brighton and figuratively a million miles from the bustling metropolis of London, the need for music as a way out was apparent from a young age.

Although older brother Mark kickstarted their musical journey by introducing Tom to Linkin Park’s Crawling on the TV (“It was the live footage one before the big budget,” Mark reminisces. “I was like, ‘What the fuck is this?! Tom, you’ve got to hear it!’”) and encouraging the younger Harfield to learn guitar, it wasn’t long before Tom was discovering bands on his own. Their list of heroes and influences is brilliantly untamed, from Robbie Williams, Alanis Morissette and AC/DC early on to Nirvana, Biffy Clyro, Metz, Hell Is For Heroes, Hundred Reasons, Drenge and Job For A Cowboy. Si is a friend from Littlehampton School, who remembers Tom’s first visit to jam, when his mother passed comment that this new kid on the block played “too loud”.

Having seen old peers from “shitty school shows” and Battle Of The Bands otherwise littered with flat covers of Oasis’ Wonderwall go on to big things, it’s clear that GLOO are setting no limits on themselves. Mike Kerr and Ben Thatcher from Royal Blood were around the scene growing up. Architects’ Sam Carter lives just down the road.

“It seems that if they stick around long enough,” Tom muses, “people achieve stuff!”

One of the best things about GLOO, though, is that they feel removed from the slick, unattainable pedestal-perching of many of their better-known peers. Si’s day job is in private healthcare. Tom and Mark both work for the family business installing lightning protection (“We’re like the fifth emergency service,” Mark quips. “Saving lives left, right and centre. It’s a bit like an electrician, really, but less skilled…”). We make a quip about their lightning rod appeal. They try not to groan.

Brilliantly, Mark is also a skateboard instructor and has opened a skate shop imaginatively named Board AF on Littlehampton seafront, where they sell GLOO-branded apparel and there are plans to put on shows in conjunction with a local cafe. “It’s a move to get GLOO more noticed,” he explains self-effacingly, “…and to get some cheap Nike SB T-shirts.”

Quirky good humour is at the heart of everything they do. Worried about spamming social media with the same handful of music videos over lockdown, the quest for content saw them start immensely enjoyable video podcast GLOOTUBE in the garage at the end of Mark’s drive. Eschewing conventional merch drops, they’ve got a fetching line of GLOO socks up for sale. Other band merch is bespoke printed onto charity-shop purchases.

Even their tour stories bear no hint of try-hard showbiz bullshit. We hear of superfans Julie and Scott who once made the epic journey from Leeds to Brighton to catch a show with genuine fondness. Middlesborough showcase Heelapalooza is name-checked as one of their favourite places to play. Favourite tour memories include one night in Newquay club Whiskers where a troublesome punter was looking to start a fight until Si emerged from the shadows to defuse the situation with a healing crystal he’d picked up at a local knick-knack shop. Another in Bristol saw their mums drive up to catch their set, before joining them for some late-night dancing to ABBA at Popworld.

As COVID subsides and live venues creak back into life, it’s clear that GLOO are looking forward to getting back to that life of really being a band. “That’s why I’ve been depressed,” smiles Tom, “because there have been no gigs! Live music is my main thing. I used to go to shows on my own!”

“You get in a van and drive around,” expands Mark. “You go to a different city. Even if only three people turn up, you’ve been given a rider and it’s just real fun.”

“I love playing gigs,” chimes Si. “I love chatting to people after. I love getting pissed. I love where a night can take you.”

So, are there any grander goals, longer term?

“I just want to make this a career,” Tom reckons, earnestly. “I’d like to have this as my life. And I’d like to have that time to make GLOO better rather than having to spend loads of time saving buildings from lightning! If I can last as long as Angus Young, I’ll be delighted.”

“If GLOO put Littlehampton on the map, I’d be happy,” Si counters.

Mark grins cheekily as we wave goodbye. “If we get a blue plaque, we’ve made it.”

Album review: GLOO – How Not To Be Happy

South Coast alt.punks GLOO turn mundanity into hell-raising hilarity on How Not To Be Happy...