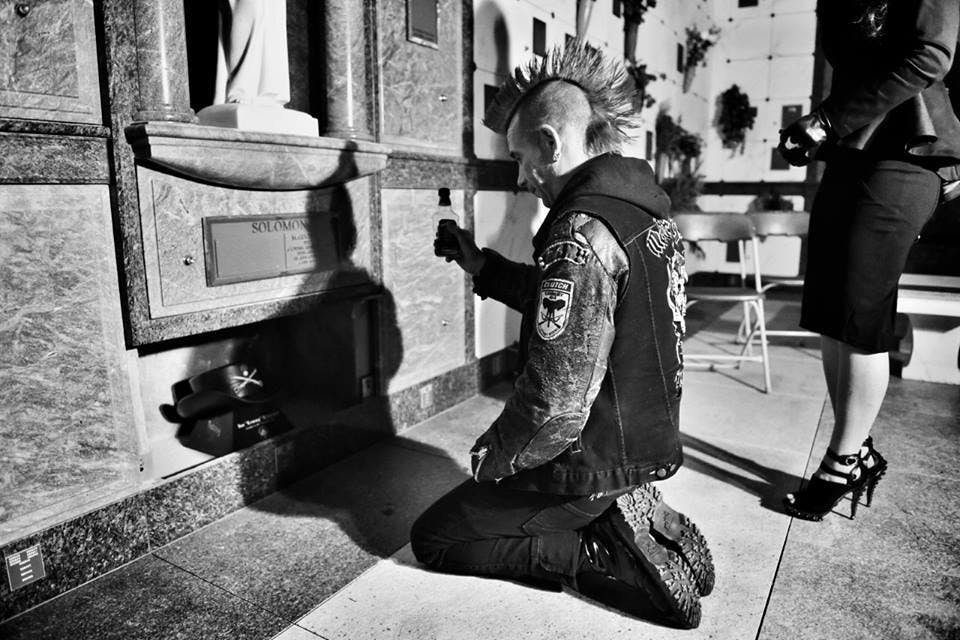 Perhaps it has something to do with facing our own mortality, or maybe it's just a mark of respect, but whatever the reason, there is always a moment of quiet contemplation when visiting the grave site of a beloved rock star. You might feel compelled to say a few words, take a photograph, or leave a gift, but there's always that moment of quiet. The world shuts off, and you're just left with your thoughts. In death, much as with their music, they seem to offer some respite.

At Lemmy's grave, at Forest Lawn Cemetery in Los Angeles, I drank a silent toast – Jack Daniel's obviously – because it felt right. Some choose to leave bottles of the stuff for him, or packs of Marlboro cigarettes, while others leave playing cards – jokers and aces. He's pretty close to Ronnie James Dio, which is fitting, since they were great friends, although Lem's plaque (Born To Lose – Lived To Win) is rather more understated than Dio's (The Man On The Silver Mountain). Either way, you can visit both, if you're so inclined, and I'm not alone in doing so.

Indeed, Jim Morrison's grave, at Père Lachaise Cemetery in Paris, gets an estimated 1.5 million visitors per year. By any measure, that's a lot of people who somehow feel the need to make the pilgrimage, and on the 20th anniversary of his death 1,000 fans rioted after police closed the cemetery early. So much for quiet contemplation. Worse still, the ashes of Lynyrd Skynyrd singer Ronnie Van Zant were dug up by vandals in 2000, forcing his family to relocate the his body and hire security guards. And in 2010 items that decorated the grave of Slipknot bassist Paul Gray were stolen, and the band put out an appeal for their return. So much for respect.

But, idiots notwithstanding, most fans are well-mannered and respectful, and I would urge you to be the same. To you these people are an inspiration, to others they are family and friends. I visited Paul's grave with Corey Taylor some years ago, incidentally, and Corey sat and talked to him, told him what was going on with the band, a moment I feel privileged to have shared. Again, people had left him gifts, cigarettes and coffee – I guess he liked Starbucks – while others had left letters or poems. Clearly, he touched a lot of lives and has not been forgotten.

And the fact is, some of these stars wanted to continue to shine, they wanted to be remembered. Johnny Ramone, for instance, designed his own memorial in the hopes that his statue, at Hollywood Forever Cemetery, would be “the most visited out of anywhere”. Although, he's up against some stiff competition – if you'll excuse the pun – since that cemetery is also where you'll find fellow Ramone Dee Dee, and such music giants as Chris Cornell and Scott Weiland, the former rather aptly in the Garden of Legends. “We weren't really inspired by Dee Dee being there,” says Johnny's wife Linda, “but Johnny thought it would be good for Ramones fans to have a place where they could go to visit the two of them.” Dee Dee's headstone, by the way, is hilarious, simply stating, 'OK… I gotta go now.' But perhaps my favourite is that of former Motörhead drummer Philthy Animal Taylor, at Hasland Cemetery in Chesterfield, his epitaph ending, 'Legendary drummer with a unique sense of humour. Missed by many. I'm a little teddy bear I don't swear…'

Oddly enough, these pilgrimages can be fun. Fremantle Cemetery, for example, is divided by denomination, and there were a few laughs trying to find Bon Scott's memorial, given that the man who wrote Highway To Hell was unlikely to be in the Buddhist section. It's said to be the most visited grave in Australia, and you can't miss it once you find it. Quite rightly, he has his own little section, and there's a statue of him in Fremantle Harbour if you ever get the chance to visit. There are worse ways to spend a day.

I'd like to visit Dimebag and Vinnie Paul someday, buried side-by-side at Moore Memorial Gardens in Arlington, Texas, and the Jimi Hendrix memorial in the Renton suburb of Seattle looks to be pretty impressive. But it's not like there's a bucket list, it's just nice to pay your respects, if you get the opportunity, to those who have given us so much. And perhaps spare a thought, the next time you go through Heathrow Airport, for Sex Pistols bassist Sid Vicious. It's said that his ashes were scattered on the grave of his girlfriend Nancy Spungen in Philadelphia's King David Cemetery, but legend has it that his mother accidentally dropped the urn at Heathrow and he's now floating around in the ventilation system.