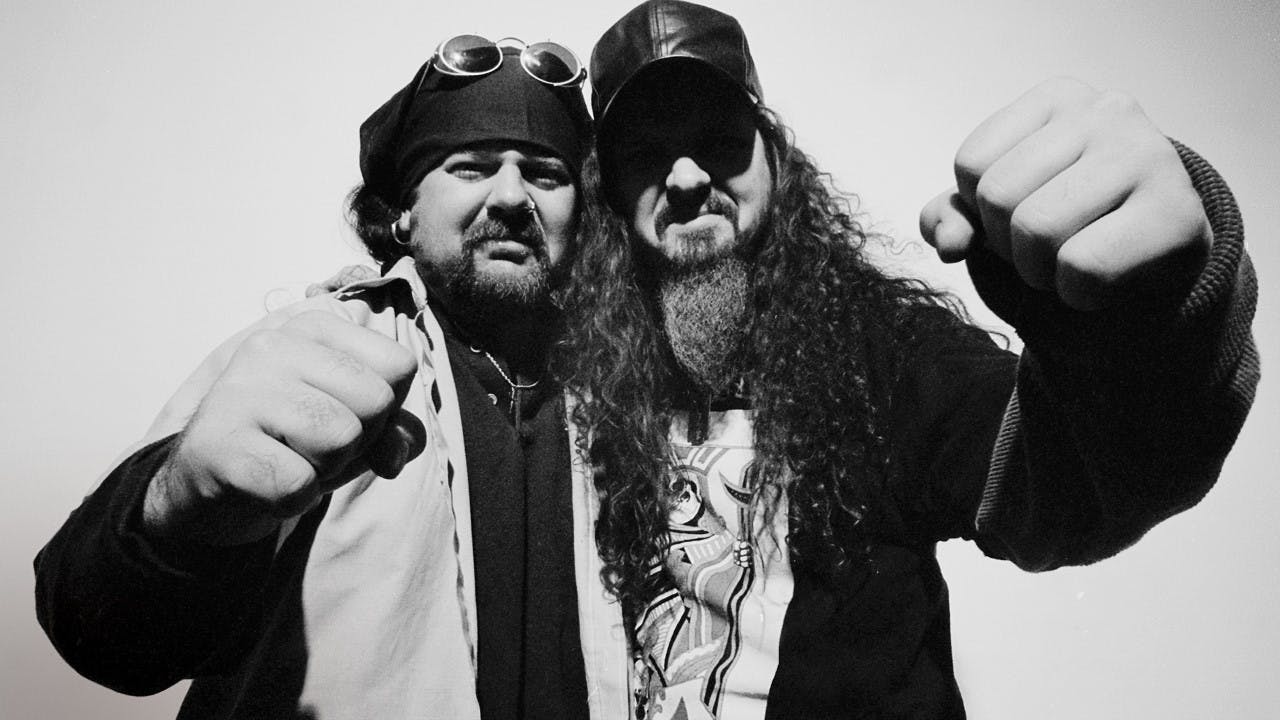 In 1989, Dave Mustaine learned a lesson about brotherly love. Having purged Megadeth’s line-up of half its personnel, the mercurial bandleader decided that his brainchild would benefit from the addition of guitarist Darrell Abbott. The potential recruit agreed, but on one condition: that Megadeth also find space for his brother, Vinnie Paul Abbott.

Believing Vinnie Paul to be Darrell’s guitar tech, Dave consented to the demand. It was only when he learned that the elder brother would be playing drums that the two parties found themselves at an impasse, as Megadeth had just recruited Nick Menza to this role. Despite being offered health insurance, armfuls of money, and a Nike endorsement, the guitarist turned the offer down. His terms were non-negotiable: it’s both of us, or neither.

“He came back and said, ‘Look man, this ain’t gonna happen. The only way it could happen is if they wanted to hire you and they already got a drummer. So let’s fuckin’ knuckle down,’” Vinnie Paul recalled his younger sibling saying.

Dave would later reflect that, “Man, if I’d hired both of them I would have had the greatest band in the world,” but Megadeth’s loss was Pantera’s gain. The group with whom the Abbotts would eventually find fame had actually formed in 1981, two years prior to Megadeth. Sporting tousled hair and spandex, in the 1980s the band released four albums that were entirely unrecognisable compared to those they would later make. At the time that Dave Mustaine came calling, Pantera were a provincial turn from Texas with little to recommend them. This lowly status makes Darrell Abbott’s display of loyalty toward his brother all the more remarkable.

The pair had been musicians since childhood. One day, Vinnie Paul returned from school carrying a tuba, only to be told by his father that girls didn’t fall for guys who played in brass sections, and so he switched to drums. As it happened, this was the instrument first played by the younger Abbott; but with Vinnie Paul the better player, Darrell transferred to guitar. The drummer remembers seeing his kin in his bedroom posing away while dressed like Ace Frehley from KISS. ‘Are you actually gonna learn how to play that thing?’ came the question. The answer, eventually, was, ‘Yes.’ The first time the pair played together, they ran through Deep Purple’s Smoke On The Water for six straight hours. Not long after, Darrell’s musical chops were sufficiently legitimate that he was able to play a facsimile of Eddie Van Halen’s 1978 tour de force, Eruption.

To the surprise of everyone who had ever heard them, Pantera’s long and misguided apprenticeship would in time bear fruit. By 1990 the band had secured a major label contract with Atlantic Records, who that year released Cowboys From Hell, their fifth album. The LP was the first to feature what would become its authors’ signature sound: precise and propulsive songs that even at their hastiest saw the two brothers, along with bassist Rex Brown, lock into murderous grooves of a kind that were at a premium at the heavier end of the metal market.

The shedding of a cock-rock carapace came at the insistence of singer Phil Anselmo, who joined the band in time for the somewhat transitional Power Metal album of 1988. Although not shy of spandex and hair that posed a fire hazard, in time Anselmo preferred taking to the stage in combat shorts and boots. On one occasion he invited Darrell to his home and played Slayer’s At Dawn They Sleep while the two men smoked a bowl and pondered a new musical direction. As Cowboys From Hell sold well, the tour in support of the record saw Pantera perform to over half a million people at Tushino Airfield in Moscow, on a bill that also included Metallica and AC/DC. Two years later, Vulgar Display Of Power – a release whose title was cribbed from a line in The Exorcist – became their first U.S. Top 50 hit. Within a year of its release, the band had their first gold disc.

“To us, heavy metal had to sound like a machine,” said Vinnie Paul of his band’s sixth album. “The guitar had to have a buzzsaw sound to it, the drums have to have an edge to [them], and [Darrell] and Terry [Date, the record’s producer] spent many hours getting the guitars ‘ass-tight’. My brother was a complete perfectionist.”

But it was the release of Far Beyond Driven in 1994 that stands as Pantera’s most remarkable achievement. Released a month before Kurt Cobain’s suicide in Seattle, and just weeks after Green Day’s Dookie, this was not a golden age for metal. Metallica would not release a new album for a further two years, while Slayer were still six months away from unveiling the underwhelming Divine Intervention. By default, it fell to Pantera to defend the faith. This they did with an album that debuted at Number One on the U.S. Billboard Hot 200 chart, and which remains the most extreme release ever to plant a flag on America’s commercial mountaintop. Far Beyond Driven showcased its authors in a harsh and unrepentant light: ‘I’m helping to legalise dope on your pristine streets and I’m making a fortune,’ sang Phil on Strength Beyond Strength, before adding ‘the president in submission, he holds out his hand on your television, and draws back a stump’. Far Beyond Driven is a nasty piece of work, and also a brilliant one. Despite its abrasiveness – or because of it – its arrival made Pantera the hottest metal band in the world.

“Before we even wrote a note, we went, ‘This album has to be the most over-the-top metal record ever made,’” said Vinnie Paul. “After Vulgar…, everybody expected us to go the Metallica route and put out our ‘Black’ album, [but] we did the opposite. We went more extreme and pushed it to another level.

“The music world thought, ‘Who the fuck is this overnight sensation?’ We went, ‘Fuck, we’ve been on the road four years non-stop, we’ve got the best fans in the world. They’re the ones who made this record Number One.’”

Despite making music that sounded as if it would cross time zones to have a fight, Darrell and Vinnie Paul Abbott embraced the concept of being rock stars in the manner of a boa constrictor. Not for them was the self-examination and doubt expressed by rock bands du jour such as Soundgarden and Alice In Chains. Instead, the two brothers sank part of their newfound wealth into the opening of their own strip club. They held a party for the Dallas Stars ice hockey team at which the Stanley Cup – the National Hockey League’s top prize – was badly dented on the edge of Vinnie Paul’s pool after being launched from a second floor balcony. Pete Steele of Type O Negative once said that “touring with them was the greatest experience. If you didn’t have a drink, they’d want to know why and get you one straightaway. Every day was a party.”

“Some of the greatest music in the world was inspired by Jack Daniel’s, Crown Royal, marijuana,” was Vinnie Paul’s opinion. “If you look at most musicians who were outstanding and then cleaned up, all their songwriting ability went away with it. Music sounds better to you when you’ve got a buzz. You feel more creative and a little less inhibited to try things.”

The Abbotts’ own mood-altering preferences were limited to alcohol and weed, and were thus relatively conservative (certainly relative to Phil, who occasionally favoured heroin). It was the singer who gave Pantera its truly volatile edge – the title Psycho Holiday came from a Post-it-note written by Rex Brown as part of a plan to get the frontman out of Dallas for a few weeks’ rest and recuperation – and in hindsight it seems obvious that the union couldn’t last. The excoriating The Great Southern Trendkill from 1996 emerged in the thick of nu-metal and sold a million copies. Four years later Pantera released Reinventing The Steel and while on tour in support of the record, the band were stranded in Dublin after two planes smashed into the towers of the World Trade Center. It was here where things were said that could not be taken back, and suddenly Pantera were no more.

“It wasn’t ‘one-for-all, all-for-one’ the way it used to be,” is how the drummer explained the band’s latter days, in 2003. “It was me and my brother in one bus, and Phil and Rex had their thing.”

Vinnie Paul and Darrell Abbott remained together, united in declining fortunes. The brothers’ next band, Damageplan, was a second-tier concern who played clubs and shared buses with other groups. If this bothered them, they didn’t let it show.

It was in these reduced surroundings that tragedy occurred. While playing at the Alrosa Villa club in Columbus, Ohio, on December 8, 2004 Darrell Abbott was shot dead by Nathan Gale, an armed fan who also killed the band’s bodyguard, an audience member and one of the bar staff, before he himself was shot by police. The incident shook the metal community, and put paid to any hopes that Pantera were on hiatus rather than at an end.

Now that neither man walks among us, people of faith can take comfort in the notion that these closest of siblings are together once more. For those not persuaded by this vision, at least the music remains.

Seven years ago, when Vinnie Paul was asked to nominate what he would like played at his funeral he answered, “Music that was a goddamn good time, like fuckin’ Guns N’ Roses. I’d want people to celebrate what [I’d] done and the fact that [I’ve] had a great life.

“I wouldn’t want my funeral to be a sad, sappy thing.”