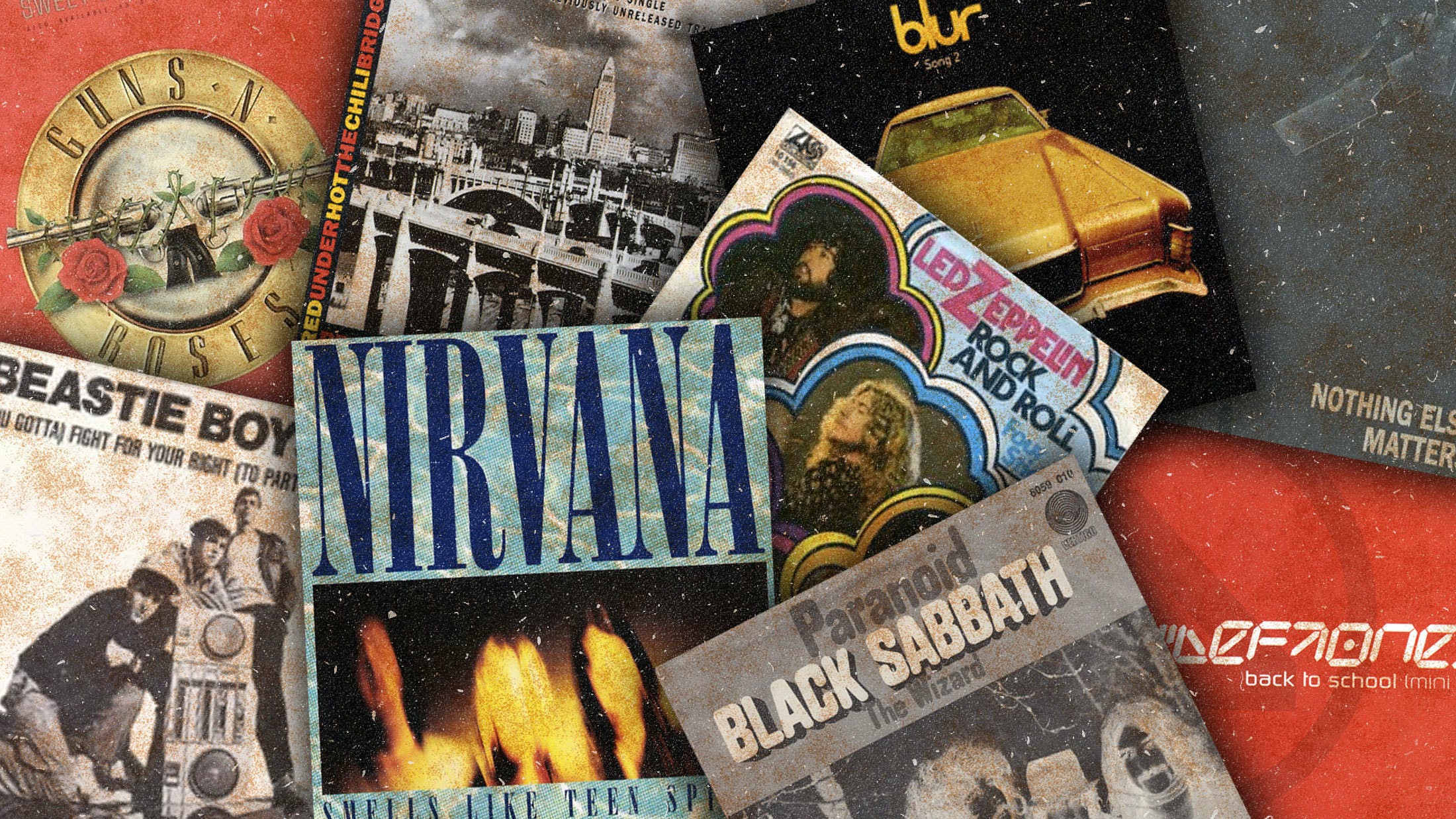 A while back, Mark Hoppus revealed how it was an unlikely source of inspiration that helped him create the opening riff on blink-182’s classic single What’s My Age Again?. Speaking to Chris DeMakes on the Less Than Jake man’s podcast he explained how it was a failed attempt at playing the lesser-known Green Day song J.A.R. that inadvertently led to the golden sequence of notes that would help him form the basis for one of his own band’s biggest hits.

It’s a happy accident that a lot of bands and artists can relate to, with rock history being littered with huge tunes coming to life as a result of some convenient quirks of fate. Here we look back on some of the best known examples of when lady luck has intervened, lending a helping hand…

Some people spend their whole lives trying to write the perfect song. For others, sometimes the magic happens to them. That was the case for this iconic hit from rock miscreants Guns N’ Roses, when that unforgettable opening riff came to Slash during a string skipping exercise in the summer of 1986 at the band’s notorious ‘Hellhouse’ digs on the Sunset Strip. “I was fucking around with this stupid little riff,” the guitarist recalled, “Axl said, ‘Hold the fucking phone! That’s amazing!’” and from there the song sprouted wings, despite the rest of the band initially dismissing its potential. History would of course prove Axl right.

Metallica – Nothing Else Matters

In 1990, while Metallica were busy preparing for the album that would cement their place as worldwide metal superstars, lovestruck frontman James Hetfield was missing his then-girlfriend. So he called her up and idly plucked out some notes on his guitar. Those notes became the starting point for The Black Album’s monster ballad Nothing Else Matters, but only later when drummer Lars Ulrich heard them and insisted the frontman was onto something. The relationship that inspired it might have been fleeting, but the song remains a staple of Metallica setlists, now dedicated to the band’s fans.

One of the Red Hot Chili Peppers’ greatest songs almost never was. The world has Rick Rubin’s, shall we say ‘inquisitive’ nature, to thank. To begin with, Under The Bridge was a poem, written by vocalist Anthony Keidis at his lowest ebb, coming off the back of debilitating drug addition and years of hedonism. While flicking through Anthony’s personal notebooks in the process of making the band’s 1991 record Blood Sugar Sex Magik, the producer found the words written down and sensed there was some songwriting gold in them. Despite the band's reluctance to stray far from their party funk sound with something inherently maudlin, it would ultimately prove to be a masterstroke and became one of their biggest hits. Being nosey pays off sometimes…

This song has fate sewn into its DNA seemingly. In late 1990 while out shopping for groceries, Bikini Kill’s Kathleen Hanna and Toby Vail spotted a deodorant named Teen Spirit, an idea they found so hilarious that it became an in-joke between the two. Later that night, the pair were hanging out with Nirvana’s Kurt Cobain and Dave Grohl and as they all got raucously drunk, Kathleen wrote ‘Kurt smells like Teen Spirit’ in Sharpie on the wall. The next day, oblivious to the body spray brand, Kurt saw the slogan and assumed it meant something deeper. The song soon came to life and rock history was altered forever.

Most bands’ throwaway songs are deserving of the term. This one is a major exception to the rule. And it all came about thanks to a few pints down the local boozer and some strong-arm tactics on the part of the record label, who wanted a short, radio-friendly single from the Brummie legends. In the time it would’ve taken to down another round of drinks, Black Sabbath duly bashed out one of metal’s most distinctive anthems and the whole thing was done in 20 minutes, with Tony Iommi instinctively summoning that iconic intro riff from the ether and the rest of the band following his lead. Sometimes leaving the pub early is a good idea.

The opening track on Sammy Hagar’s eighth album VOA came to the vocalist while he was pulled over by a cop on a late-night drive. The story goes that Sammy had just gotten off a flight after a three-month safari in Africa, and hired a rental car at the airport to get to his place in Albany, New York, but at 2am he was stopped for doing 62 miles an hour, breaking the 55 miles an hour speed limit. While the police officer was writing the ticket, the frazzled, jet-lagged frontman grabbed a pen as inspiration hit. “I swear the guy was writing the ticket and I was writing the lyrics. I got to Lake Placid, I had a guitar set-up there and I wrote that song on the spot. Burnt.”

This one came from another loose rehearsal jam, while the legendary Brit quartet were struggling to finish up the writing of Four Sticks. Holed up in the rented Headley Grange mansion in Hampshire, drummer John Bonham bashed out the the intro to Little Richard’s Keep-A-Knockin’ to lift the mood, which sparked guitarist Jimmy Page into life, adding a riff he thought sounded like something Chuck Berry might play. As luck would have it the jam was being recorded and incredibly, Rock And Roll was nailed inside 15 minutes.

Deftones – Back To School (Mini Maggit)

Frontman Chino Moreno has actually gone on record as calling this song a mistake. Famously railing against being erroneously lumped in with the nu-metal crowd at the time, Deftones’ third album White Pony was a far more artistic, ambitious effort that sought to separate the band from that association once and for all. When the label wanted a marketable single however, the band decided to “show those fuckers how easy it is” and created this blistering track in under a half an hour.

Pearl Jam – Elderly Woman Behind The Counter In A Small Town

Picture the scene: Eddie Vedder is sitting in a San Fran outhouse the size of a small bathroom where he slept during the making of Pearl Jam’s 1993 second album Vs., humming and strumming some chords and words he cobbled together in a matter of minutes, trying to shake off the songwriting cobwebs. It was never intended to be anything more. Luckily, guitarist Stone Gossard was sitting outside reading the newspaper when he overheard everything and – rightly impressed – insisted the song was perfect for the band. To this day, it still gets aired at almost every show the Seattle band play.

We wouldn’t usually pay attention to Blur on Kerrang! but in this instance they merit a mention, not least because there’s a school of thought that says the Britpop band wrote 1997 megahit Song 2 as a parody of grunge and it was only ever supposed to be a private joke. According to guitarist Graham Coxon, however, it was meant more as two fingers up at their record label, hence the deliberately simplistic, almost sarcastic delivery and minimalistic detail. But the last laugh appears to be on Blur, as despite three decades worth of work and many other hit singles, they’ll forever be known to many people around the world simply as ‘that woo-hoo band’.

Beastie Boys – (You Gotta) Fight For Your Right (To Party!)

Another song misunderstood by many, the Beasties actually penned this 1987 superhit as a reaction to hair-rock bands writing songs that celebrated the sleazy, morally dubious side of rock’n’roll. “There were tons of guys singing along… who were oblivious to the fact it was a total goof on them,” Mike D later lamented. The song was never meant to be anything other than a throwaway bit of fun, but it would ultimately help launch the hip-hop trio to superstardom. Luckily, they had more aces up their sleeves, unlike this next lot…

You have to feel for Warrant. All that most people know them for is this one song and although it became an internationally loved track, it completely overshadowed the band’s entire career and became something of an albatross. And again, it would be some classic record label interference prompting the initial idea. With Aerosmith’s Love In An Elevator riding high at the time, Columbia Records wanted their new charges to try their hand at something similar. Incensed, Warrant frontman Jani Lane disdainfully scribbled some lyrics on a takeaway pizza box and inside 15 minutes Cherry Pie was written. The label got what they wanted, though, and suddenly the band’s 1990 album was named after the song, the subsequent tour was renamed and arguably, the way that history views the Hollywood rockers was changed forever.