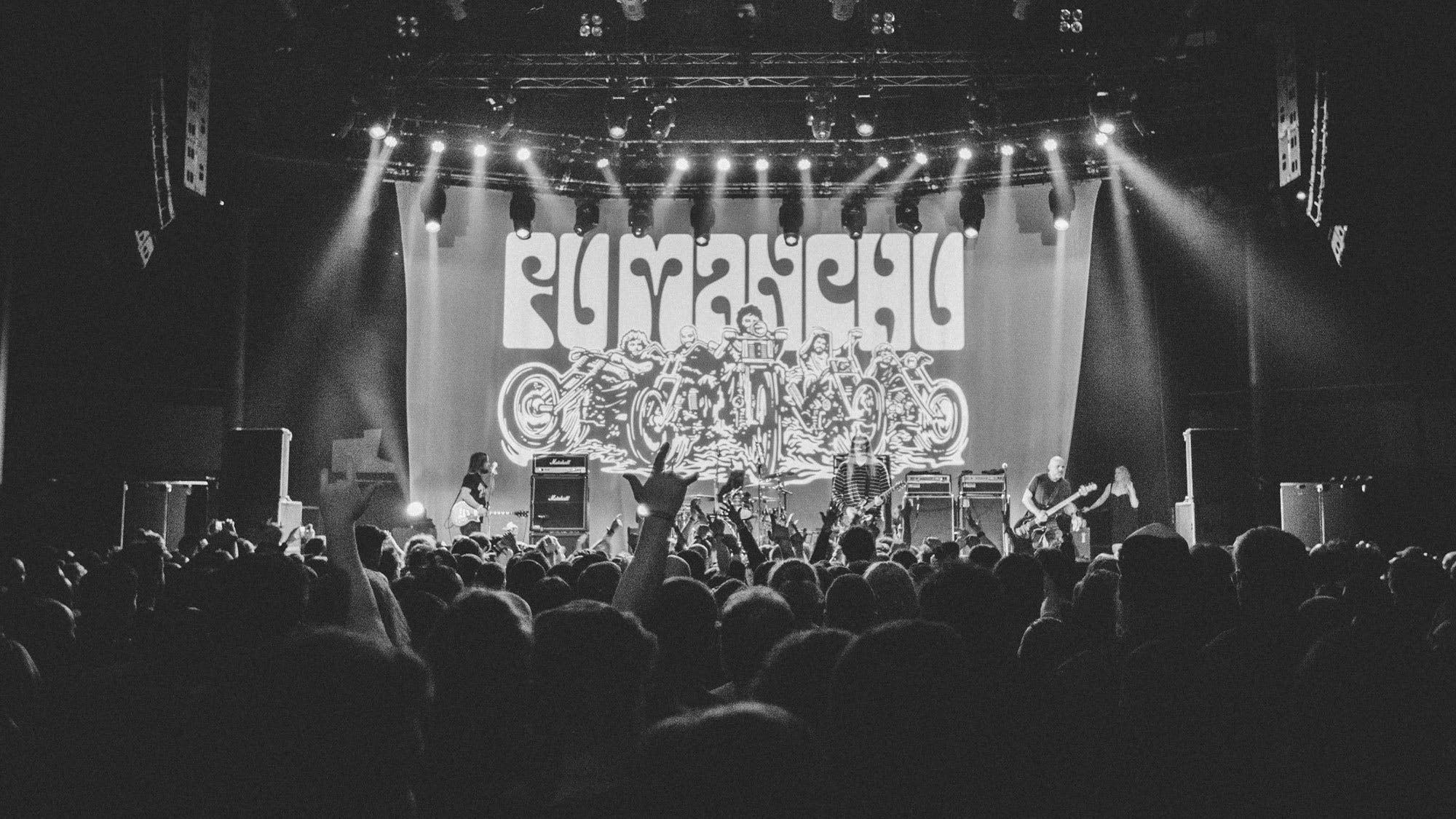 It’s not your typical bank holiday (well, it is as far as the weather goes), as for the eighth year in a row Camden Town in London finds itself the altar at which stoner pilgrims and doom-mongers come to worship. The size the festival has grown to is testament not just in the magnitude and diversity of acts from all walks of life playing here, but also in its reach, having just last week launched the inaugural New York arm. It’s all about the here and now though: the booze will flow long into the night, the beards are as thick as the riffs, bones will tremble before the might of the scene’s finest, and plenty will lose their freakin’ minds as they wave goodbye to reality and plunge headfirst into the haze.

Naturally, Kerrang! makes its return to uncover the secrets buried under the ominously green smog rising from deep within the five venues that 51 of the heaviest bands around will wreak havoc. So saddle up and follow the smoke as we share 13 things we learned at Desertfest 2019.

2019 is the year women ruled over the weekend’s festivities. Messa’s ambient craft, for example, unleashed plenty of heandbanging riffs beneath singer Sara’s enchanting voice, leaving goosebumps on Sunday’s pilgrims. But it’s the double-bill of Blackwater Holylight and High Priestess that signals the dawning of a new era of doom: between the densely kaleidoscopic psych-grunge of the former, and the latter’s jaw-droppingly ethereal heaviness, this is a bill that has crowds speechless swaying in tune to their dimensions. Both bands sound colossal but it is perhaps High Priestess drummer Megan Caillier Mullins, with her snaking yet monstrous performance, who steals the show.

Nobody Knows What To Make Of HHY And The Macumbas

Macumba is a word of Brazilian origin which here denotes anything unexplainable. It's apt. They're part kosmische-drone-jazz, part industrial installation, and part performance art; whatever you want to call it, there’s no denying how bizarre this hour-long exhibition of subterranean sounds is. Yet the few who appear to get it stand hypnotised. Not one person here can fully comprehend what they’re witnessing, but this nonstop jam between two drummers, an electronics guru, and Jonathan Saldanha’s metamorphosis from mortal to sonic vessel is an enthralling spectacle that needs to be seen to be believed.

In amongst the stoner rock, doom and psych freakouts of the expected Desertfest fare, there's left-field treats to be had. Enter excellent London death metal quartet Grave Miasma. "Not our usual crowd," notes frontman Y to the Electric Ballroom. But the eerie, crawling atmosphere of Pillars and Arisen Through The Grave Miasma intoxicates those gathered marvellously, and on this big stage, their already overpowering live incarnation becomes something truly fantastic. And of course, the only way to follow such a mixture of heaviness and abyss-staring is with Wovenhand's soulful, gothic blues. Casting a spell seemingly without needing to try, they enrapture with something far looser and more immediate than what's been before, but ultimately lead down a similarly dark, diabolic path.

Portland’s R.I.P. are one of the underground's coolest bands, and shows like this are the reason why. Brawling through the bulk of 2016’s In the Wind album, the street-doom gang turn The Underworld into the kind of spit’n’sawdust dive normally seen in grindhouse flicks. There’s no violence tonight, but it's wild and rough in here as head honcho Fuzz commands a tremendous stage presence, wielding a scythe as if he’s taking every one of these boozed-up leather-clad fiends with him beyond the grave.

Laura Dodlan Is The Rock Star The World Needs

Electric Citizen are the perfect finale for Riding Easy Records' takeover of The Underworld. Their Sabbath-meets-Purple riffs cause enough of a frenzy on their own, but it's when frontwoman Laura Dolan erupts on stage that tonight’s denizens lose their minds. She absolutely kills it, bounding about with reckless energy and swaggering like she’s been doing this for decades. Their presence is completely unrecognisable since their last time on our shores, giving a festival-stealing performance, and Laura leaves her mark as one of heavy music’s most entertaining stars.

What’s more apt than being guided towards nirvana while on your annual stoner pilgrimage? If the sight of a blissed-out Electric Ballroom packed to capacity, slowly tuning itself to the frequencies of the universe is anything to go by, the answer is a resounding “nothing”. That is precisely what OM’s Eastern-centric meditations accomplish, effectively rendering the day’s party-goers and doom-mongers transfixed under the omnipresent blue haze. The experience of Gethsemane and Thebes goes beyond the spiritual, and as Al Cisneros begins his chants above the brooding low-end drone and Emil Amos’ mighty rhythms, the entire audience becomes one with itself and the music.

Saturday at The Black Heart is all about showcasing names from America’s fertile stoner rock scene. Massachusetts’ kings of the psych-meets-classic-heavy-riff Worshipper absolutely level the tiny venue as the bulk of blinding new record Light In The Wire sounds unbelievably huge, and sends pilgrims straight to the merch stand to nab an early copy. Zed, meanwhile, hail from the other end of the continent, and their booze-drenched blues’n’roll almost breaks into a riot as both band and audience raise the roof and plenty of Hell in the process, leaving the most triumphant first impression. It is safe to say the UK hasn’t seen the last of this warmly-welcomed pair.

...But Homegrown Talent Still Packs The Most Venues

It might be the London-leg of this mushrooming festival establishment, but that doesn't mean we're not humbled when our diverse wealth of underground titans pulls droves of doom-mongers into their murky lairs. There’s something deeply satisfying in watching international hordes get their groove on to Cheshire’s 1968 retro-stoner renditions, baring the brunt of Glaswegian wrecking-crew Headless Kross’ monolithic sludge onslaught, or willingly getting crushed by gravity as Sheffield’s Kurokuma herald in the cataclysmic end of days, or Video Nasties bring a punk'n'roll thrashing. But a packed Electric Ballroom wishing Elephant Tree percussionist Sam Hart a happy birthday as the London group send Saturday’s early-risers to another dimension? That’s something else entirely.

Seven thunders are indeed roaring the moment Stones Jesus takes to the stage, and before they even begin there are rampant cries for that song – the one that catapulted the trio lightyears ahead of their peers. Sid Olegovich’s thumping basslines quickly silences the racket as the mammoth tunes of Hands Resist Him and Black Woods turns the Electric Ballroom into a stomping ground – and boy does every bass riff explode like some 10-megaton blast! Water Me from the latest record goes down a storm and by the time Igor Sidorenko takes his pew to command a karaoke rendition of the gargantuan I Am The Mountain, a bellowing eruption of voices ensues before the trio dives into the heavenly pool from which this song was born. Absolutely fucking unforgettable.

For Their 20th Anniversary The Church Of Ra Plunge London Into A Multidimensional Darkness...

It’s dark, deathly silent, and everybody waits with bated breath. After a prolonged intro to Boden it’s as if the floor suddenly swallows everyone whole as Belgium’s Amenra begin their bludgeoning mass. White supernova flash in time to the brutally melancholic waves of A Solitary Reign and Children Of The Eye, crashing into an ocean of heads moving completely in unison as Colin H. van Eeckhout’s haunting wails pierce through the abyssal night. The sound is gargantuan, not just because these prayers are cut from the finest cloth but because, as if by fate, the Ballroom’s sound is the perfect instrument upon which this wholly moving slab of pitch-black atmospheric sludge cascades.

After Saturday night’s obliterating intensity, both Eeckhout and guitarist Mathieu J. Vandekerckhove (CHVE & Syndrome respectively) cast one last shadow with their intricate avant-garde noise textures until united. The pair take it in turns to drown The Underworld in dense swathes of hypnotic dirges while the day’s pilgrims stand, silently, in awe. The timing of everything here is immaculate as Syndrome joins in CHVE’s hurdy gurdy-led ambience before constructing walls of droning fog, cresting with deafening volumes until the summit crumbles underneath the weight of it all. There doesn’t seem to be a single person in the room whose hairs have failed to stand on end: one way or another, no one leaves this void quite the same.

Colour Haze And Earthless Score The Soundtracks For Our Perfect Trip

With Monkey3’s broken equipment and Naxatras’ ongoing visa issues, the prospects of a full-blown acid trip seemed doomed. That is, until Munich and San Diego’s masters of heavy psychedelia save the day with two conscious-altering performances. The energy within The Roundhouse as Colour Haze celebrate their 25th year is simply euphoric as their otherworldly instrumentals release minds from limitations of the flesh; the ovation they receive for Labyrinthe verges on overwhelming and their breathtaking set completely wins over all in attendance. When Earthless take over the reigns, the out-of-body-experience kicks into stellar overdrive – their exhilarating surges of power and telepathic rapport push those freed minds toward the furthest regions of experience. It’s heavy maaan, so damn heavy!

Fu Manchu Are Still The Kings Of The Desert

It’s been a long day of psych-rock over at The Roundhouse, but all the cosmic highways are about to come to a screeching end as Orange County’s top dogs Fu Manchu lay the asphalt down on Desertfest for a finale of frenetic stoner anthems. It doesn’t take long for pits to erupt and spiral out of control, and Scott Hill’s tribe of cruisers, even three decades in, still swing all the punches without ever needing to stop. Hits Evil Eye, Weird Beard, and King Of The Road sound utterly enormous, barrelling down the desert highway with the scorching sun on their backs and nothing but open road ahead until world’s end has been reached. This is the ultimate ecstasy to be found here, and Fu Manchu, closing out on fan favourite Godzilla, spreads it about for all to bask in.