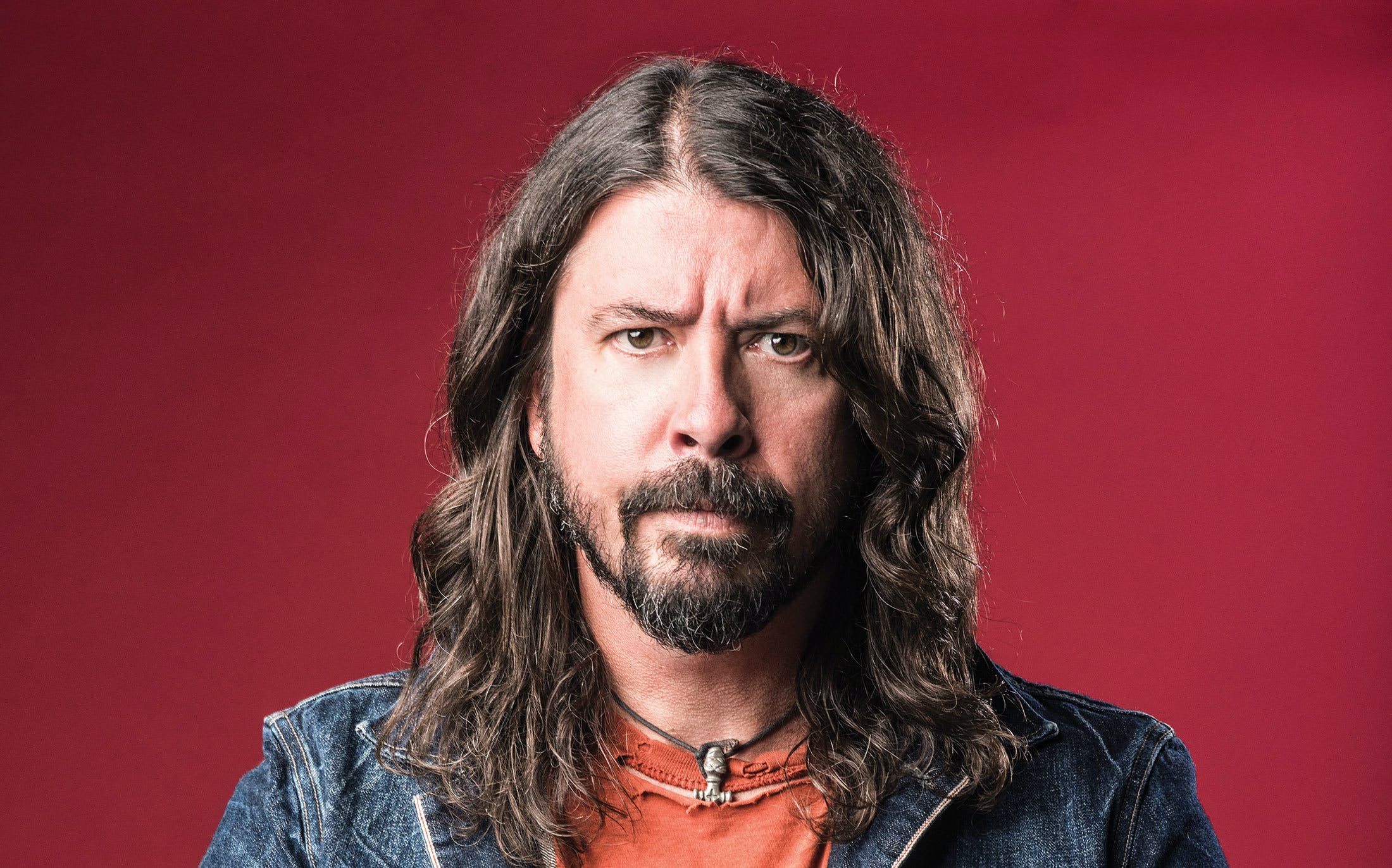 Nirvana, Foo Fighters, Probot, Them Crooked Vultures, Tenacious D... Dave Grohl's discography is nothing short of impressive. He's been in the public eye since the ’90s, exploding onto the scene with Nevermind, and in 2020 went viral twice with his drum battle against Nandi Bushell and his appearance on the BBC's COVID-19 fundraiser with some of music's biggest names performing Times Like These.

But how much do actually you know about The Nicest Man In Rock? Here we present 20 lesser-known facts about the Foos frontman that even the most dedicated superfan might not know.

1He wrote his first song about a dog

Inspired by the idea that Southern rock legends Lynyrd Skynyrd were named in mocking tribute to a Jacksonville, Florida high school teacher, Dave’s first musical project was the HG Hancock Band, a duo with his North Springfield Elementary School classmate Larry Hinkle: ‘HG’ stood for Hinkle/Grohl while ‘Hancock’ was the surname of the pair’s PE teacher. The band’s first composition, Bitch, was written in praise of Dave’s dog, BeeGee.

2His first band were Nameless

In high school, Dave joined a covers band fronted by his buddy Nick Christy. Having cut their teeth at backyard parties, in 1984 the quintet put their name forward to play Thomas Jefferson High School’s annual talent contest… or, rather, they would have done had they decided upon a name yet. In the end, performing as Nameless, the group blasted through three covers – The Who’s Squeezebox, Chuck Berry’s Johnny B. Goode and Kenny Loggins’ Footloose – but lost out on the day to senior class rockers Three For The Road. You can check out some of Nameless’ earliest recordings on YouTube.

3Rush made him want to be a drummer

Asked to pinpoint one album that inspired him to begin playing drums, Dave selected Rush’s classic 2112, an album he was introduced to at age nine by his cousin Trip, while on a family visit to Chicago. He took the record back home to Virginia with him and fell in love with Neil Peart’s “innovative” drumming. “It was really the first time I ever heard a drummer in the forefront of the band,” he recalled. In a nice life-turning-full-circle moment, in 2013 Dave and Foo Fighters drummer Taylor Hawkins inducted the Canadian rock legends into the Rock & Roll Hall Of Fame, and also performed a section of 2112 with the band.

4He was just 16 when he put out his first record

The first band in which Dave played drums was Washington, D.C. hardcore outfit Mission Impossible, born from the ashes of Freak Baby, in which he played guitar. The band made their recording debut, alongside fellow D.C. punks Beefeater, Grey Matter and more, with the song I Can Only Try on a seven inch compilation EP titled Alive & Kicking, put together by local fanzine editor Scott Crawford. In 2020 Scott exhumed another Mission Impossible track, Now I’m Alone, for the soundtrack companion to his excellent 2014 DC punk documentary Salad Days.

5He used to live with Kurt Cobain

Dave played his first gig with Nirvana at the North Shore Surf Club in Olympia, Washington, on October 11, 1990. Later that month, he moved into Kurt Cobain’s one-bedroom apartment at 114 North Pear Street in Olympia, where he stayed for eight months, sleeping on the frontman’s couch. “It was chaos,” Dave recalled. The Foo Fighters song Friend Of A Friend (originally recorded by Dave for his Pocketwatch cassette album) on 2005’s In Your Honor details his memories of that period, with lyrics such as 'he plays an old guitar with a coin found by the phone' inspired by Kurt.

By his own admission, Dave felt like “an outsider” during his stay in the Pacific North-West. Kurt’s indie scene friends in Olympia mockingly christened him ‘The Rocker’. The drummer once cleared the room at an Olympia house party by playing Primus’ Frizzle Fry album on the stereo. “I put on the Primus tape and suddenly I’m the epitome of uncool,” he recalled to this writer. “I’m like, ‘What, I’m not the cool guy? You all are fucking nerds!’ It was a weird scene… they might as well have been fucking Mormons.”

No, Arnold Schwarzenegger didn’t make a cameo appearance on Smells Like Teen Spirit, but the Tama Black Beauty snare drum Dave Grohl used to record the song, hired from Drum Doctors on Sherman Way in Los Angeles, was nicknamed ‘The Terminator’. Drum nerds might like to know that a Black Beauty snare also features on two of the best rock albums of the 1980s: Metallica’s Master Of Puppets and Def Leppard’s Pyromania.

8Dave once got Nirvana to record a death metal track

During downtime on a trip to Brazil in January 1993, Nirvana booked a recording session to demo some new material for the follow-up to the hugely successful Nevermind. One track from the session that ultimately didn’t make the cut on what became In Utero was a cover of Swedish death metal band Unleashed’s Onwards Into Countess Battles, which originally appeared on the band’s 1992 album Shadows In The Deep. "This is exactly what makes Dave amazing," notes Igor Avidon, a self-described Dave superfan who runs an agency by day. "Who else covers a Swedish death metal song while playing in a grunge band in the early ’90s? Only Dave." Strictly speaking, the track was more a Dave track than a Nirvana track, as the talented drummer played all the instruments on it, but Kurt joined in on vocals, the pair ditching the original lyrics in favour of simply grunting the word 'Meat!' over the riff.

9He has a secret punk rock pseudonym

In 1992 Melvins frontman Buzz Osborne recruited Dave to drum on his King Buzzo EP. Perhaps because of contractual complications with Nirvana’s label, or perhaps simply to have a giggle, he opted to be credited on the EP as ‘Dale Nixon’, the same pseudonym Black Flag guitarist Greg Ginn previously employed when playing bass parts on his own albums. Track four on the EP, Skeeter, is an alternate version of the song Just Another Story About Skeeter Thompson which Dave recorded for the Pocketwatch cassette, Skeeter Thompson being the bass player in his former band Scream.

10Before Foos, Dave started a band with his sister

In April 1992, Dave formed a short-lived band called Allister Lobb, with Mikey Dees, the frontman of Olympia punks Fitz Of Depression, on guitar and his big sister Lisa on bass. The trio recorded a five track instrumental demo with Dave’s roommate and long-time friend Barrett Jones, three of which – Make A Bet, Podunk and How I Miss You – were later repurposed as Foo Fighters songs.

This Is A Call, the opening track on Foo Fighters’ self-titled debut, and the album’s first single, was written in a Dublin hotel room while he and his first wife, photographer Jennifer Youngblood, were on honeymoon in Ireland in 1994. The track represented a new beginning for Dave after the dark days following Kurt’s death. “The verse is just bullshit, it’s nothing, I wrote it in a bathroom, but the chorus on the other hand means a lot to me,” he said. “This was me finally saying goodbye to my past.”

12Dave got Foo Fighters’ logo tattooed on his neck in London

Foo Fighters fans will know that the cover of the band’s third album, There Is Nothing Left To Lose, features a photograph of a tattoo of the band’s ‘FF’ logo on the back of Dave’s neck. That tattoo was inked by Londoner Lal Hardy, who’s also tattooed Liam Gallagher and TV presenter Dermot O’Leary among others, in his Muswell Hill studio. The first pressing of There Is Nothing Left To Lose actually came with a stick-on transfer of the same tattoo.

The Foo Fighters frontman met his second wife while acting as Taylor Hawkins’ ’wingman’ on a date at the Sunset Marquis hotel in Los Angeles in 2001. God only knows what Jordyn Blum, a friend of Taylor’s date, thought when an inebriated Dave handed her his phone number on a piece of paper featuring the words “you’re my future ex-wife”, but clearly this unorthodox seduction paid off: the pair married at their home in LA on August 2, 2003. Jordyn, mother to Dave’s three daughters, remains very much married to the silver-tongued romantic.

14He once had a murderous stalker

In 2005, the FBI arrested a woman who was threatening to kill Dave. “She had a map of my house and said she was going to kill me, then herself,” he revealed to FHM magazine. “The FBI locked her up. I was like, ‘What? I didn't fuck her, did I?'"

15He has rocked out in the White House

When Paul McCartney was awarded with the prestigious Library of Congress Gershwin Prize for Popular Song in the summer of 2010, Dave was one of the artists (alongside Jack White, Elvis Costello and more) invited inside the White House to salute the former Beatle’s contribution to popular culture. He stood in with Paul McCartney’s backing band to perform a cover of Wings classic Band On The Run for an audience which included Paul and (then) President of the USA Barack Obama. Dave returned to the White House four years later to interview him for the Sonic Highways documentary series.

In 2012 the Philadelphia Enquirer newspaper reported that Dave gave a $1,000 tip to bar staff at the Smith & Wollensky bar at the city’s Rittenhouse Hotel on two consecutive evenings. More recently, in 2018, he rounded up a $333.30 bar bill at infamous Los Angeles rock’n’roll watering hole the Rainbow Bar And Grill to the more satanic total of $666.30. What a nice man.

The posthumous Michael Jackson album, Michael, lists Dave Grohl as a guest drummer on a track called (I Can’t Make It) Another Day, alongside Lenny Kravitz. However, Dave maintains that only one solitary snare hit from a lengthy drum track he taped with producer Butch Vig actually made it on to the track. “I don't know who's playing drums on it,” he said, “but it ain't me.”

18He has been a Nameless Ghoul

Dave produced and played on Ghost’s 2013 EP If You Have Ghost. He plays rhythm guitar on the Swedes’ cover of Roky Erickson’s If You Have Ghosts and drums on ABBA cover I'm A Marionette and Depeche Mode cover Waiting For The Night. It’s also rumoured, though has never been officially confirmed, that Dave had played live with Tobias Forge’s band.

19He’s not a fan of Donald Trump

Given that Dave has played fundraising rallies in the U.S. for the Democratic Party and once publicly referred to former President Barack Obama as his “hero”, it might not come as a total surprise that he wasn’t down with Donald Trump. “He just seems like a massive jerk,” was Dave’s considered opinion. “The American Dream is broken. I am ashamed of our president. I feel apologetic for it when I travel.”

Well, you know, there’s never enough hours in the day when you’re a father of three, a producer, a film-maker and a video director, in addition to being the world’s most in-demand rock star…