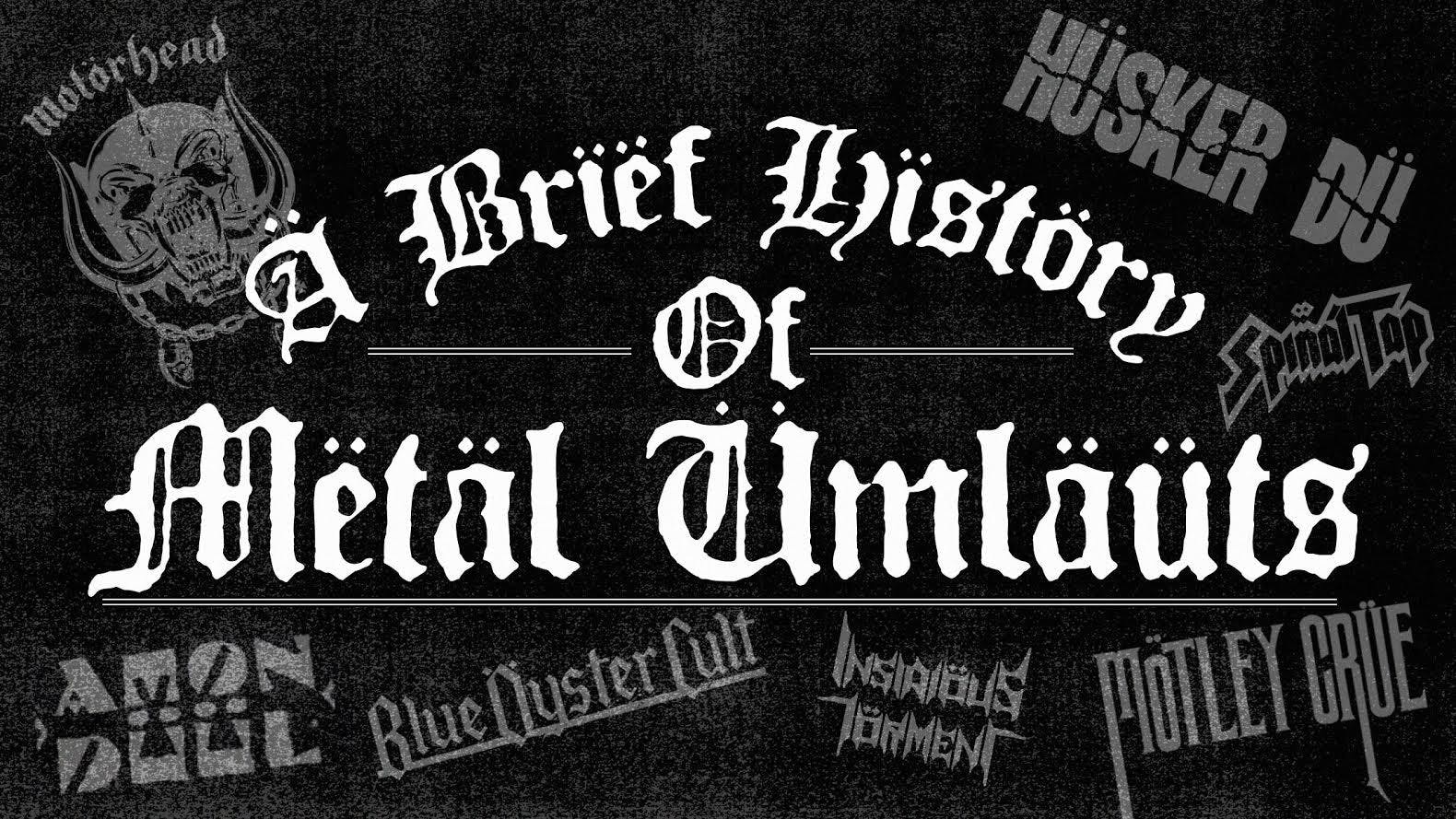 What is it that makes umlauts so metal? It’s hard to say – is it the way they can make an O look like a tiny Satan? Is it the immediate associations with Germanic, Nordic and generally forest-strewn areas? Is it the (usually) gratuitous nature of them?

Technically speaking, the word umlaut only refers to the dots when they’re in a German word, when they perform pretty much the same function as an E coming after the letter (like the cat scientist Schrödinger, also known as Schroedinger). Over a non-German word, it’s a diaeresis, which doesn’t sound as metal, but specifies that the second of two vowels needs to be pronounced – it’s why Zoë doesn’t rhyme with doe.

Here are 13 (one of the most metal of numbers) of the umlautest moments in röck.

A German art collective that became a psychedelic experimental rock band, Amon Düül weren’t using umlauts in the way they’d grow to be used - they were just making up a nonsense word with Düül (Amon came from the name of the Egyptian sun god). It was later on that the dots became a more deliberate statement of intent. Other acts – Björk, Röyksopp and more – also have non-metal umlauts where it’s just, like, their name.

The heavy metal umlaut is thought to have originated with Blue Öyster Cult, best known for cowbell classic Don’t Fear The Reaper. Having previously been called Soft White Underbelly, they were given the name by their manager Sandy Pearlman – it came from a poem he’d written in the 1960s – and initially hated it. There is some dispute about whose idea the umlaut was – both guitarist Allen Lanier and rock critic Richard Metzler claim to have suggested it. Metzler claims he suggested it because of “the Wagnerian aspect of metal”.

The umlaut on the second O of Motörhead was put there by Lemmy, an idea he admitted he “pinched” from his friends in Blue Öyster Cult. The accent mark isn’t there for pronunciation reasons – when asked about its presence, he said “I only put it there to look mean”. He remained a fan of the accent, advising the guitarist who joined the band in 1984 to change his name from Wurzel to Würzel.

The hardcore pioneers came up with their name while playing a Talking Heads song. Unable to remember the French bit in Psycho Killer (which goes “Qu'est-ce que c'est?”), they started shouting any three-syllable phrase that came to mind. One was “Hūsker Dū?”, the name of a 1970s board game. They switched the horizontal line accents - known as macrons - for umlauts.

As Vince Neil recounts: "I can remember it like it was yesterday. We were drinking Löwenbräu, and when we decided to call ourselves Mötley Crüe, we put some umlauts in there because we thought it made us look European. We had no idea that it was a pronunciation thing. When we finally went to Germany, the crowds were chanting, 'Mutley Cruh! Mutley Cruh!' We couldn’t figure out why the fuck they were doing that."

The self-proclaimed “World’s Worst Band”, comedy metal act Green Jellÿ (slogan: Green Jellÿ Suxx) started out as Green Jellö, before a 1992 lawsuit from Kraft Foods (owners of the Jell-O brand) forced them to change it. The official line from the band (which at one point featured future Tool and A Perfect Circle frontman Maynard James Keenan) is that the umlaut causes the Y to be pronounced like an O.

Seattle proggers Queensrÿche began life as Queensreich, but changed their name to avoid accusations of far-right leanings. When doing so, they added the umlaut, a move they subsequently had mixed feelings about. Frontman Geoff Tate said: “The umlaut over the 'y' has haunted us for years. We spent eleven years trying to explain how to pronounce it.”

Although formed in 1979, it was for the logo of the 1984 movie This Is Spinal Tap that Spın̈al Tap acquired both their umlaut and their dotless I. Singer David St Hubbins (Michael McKean) explained in a magazine interview: "It's like a pair of eyes. You're looking at the umlaut, and it's looking at you." The letter N can in fact have a diaresis above it, but only in certain languages of Guatemala and Madagascar.

There's only one dot (or, to give it its proper name, tittle) above the I in Voivod, but the Canadian thrash band made up for it on their 1986 album Rrröööaaarrr, featuring the track Korgüll The Exterminator, and 1988 album Dimension Hatröss (featuring Chaosmöngers as well as a cover of the Batman theme). Two members of Voivod, Denis "Snake" Bélanger and Jean-Yves “Blacky” Thériault, have acute accents in their name, so they were familiar with how to get to that bit on a computer.

Punks Die Ärzte have been going since 1982 and are huge in their native Germany, but it wasn’t until their eleventh album that they went full umlaut. See, the one above the A in their name is completely legit, a necessary part of the word (their name means “The Doctors” in German, and wouldn’t without the dots). For their 2003 release Geräusch, they added a third dot to the A, which is completely unnecessary and entirely untypable.

Just to keep things confusing, child-friendly educational Finnish heavy metal covers band Moottörin Jyrinä has both a silly metal umlaut and a regular Finnish language one. The one in Moottörin is unnecessary and just placed there for fun, but the one in Jyrinä is part of how that word is spelled in Finnish. Oh, for Christ’s sake.

By the time Frank Turner formed his post-Million Dead hardcore band, metal umlauts were quite a self-aware, ironic thing to do, and it had become difficult to use them in a completely straight fashion. All of Möngöl Hörde’s reviews pointed the umlauts out as signalling hey, this is a fun band, we’re here to have fun. The days of the non-ironic metal umlaut might be over. RÏP.