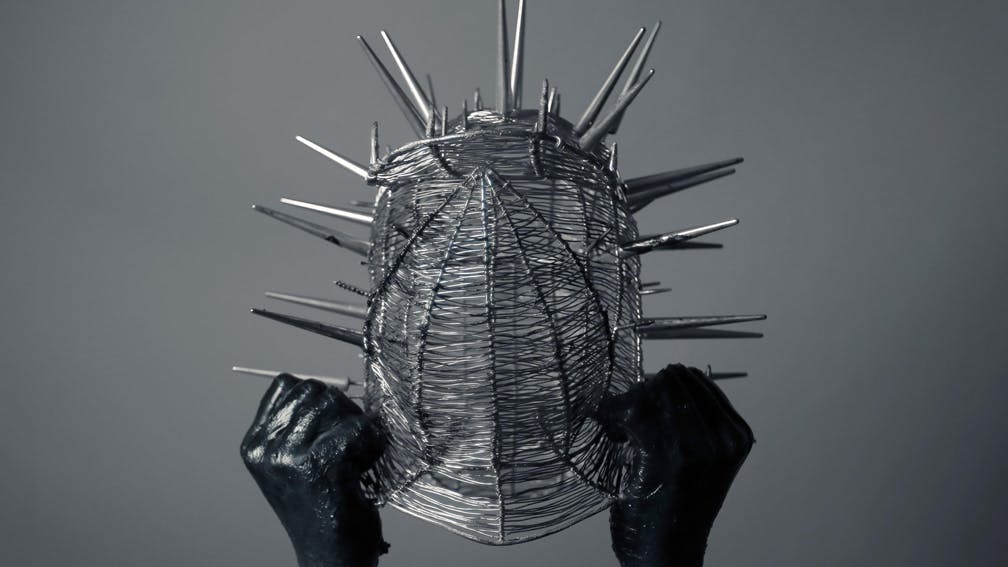 You almost don’t want to know too much about Ghostemane. Rare is the gift of an artist quite so murky, mysterious and enigmatic as he, to dig too deep to find the actual man behind this sinister goth alt-rapper (as a loose description) would be to ruin something that’s beautiful in its shadowiness. But then again, perhaps the truth, what’s actually lurking in Ghostemane’s shadow, is stranger than fiction. He does, after all, remain hard to know, even having appeared on the cover of Kerrang!, and with the thick end of two million followers on Instagram. Perhaps this weird, spooky conjurer of noises from the darkest recesses of sound and magicking them into something that could (again, loosely) be umbrella'd as rap-meets-industrial really is, oddly, exactly as strange and dark as he appears.

Anti-Icon does nothing but add to this mystique. Except for a couple of passages of mild relief, everything on here grinds and gnaws with a harsh, electronic power and rusted industrial menace. Songs like Vagabond and Lazaretto are stressful slices of shadowy noise, somewhere between Nine Inch Nails at their most obtuse, Code Orange’s glitches and the nihilism of Ministry. Dark beats appear in bursts, before things make one of their frequent turns – a riff, a screamed passage, digitised vocals – meaning you never lock into any groove. There isn’t really one to lock into for long before Ghost chucks you into somewhere new. On Sacrilege and The Winds Of Change, shades of Midsommar soundtrack genius The Haxan Cloak’s creeping, morbid dread add to an already tense atmosphere, while the ticking rhythm in AI is oddly nasty all on its own.

For the human element, Ghostemane’s vocals are as varied and serpentine as the music backing them. His high-voiced quickfire rapping on Hellrap (which is a bit like Korn’s Jonathan Davis) is elsewhere punctuated by a low, Marilyn Manson-esque croak, barely audible whispers and the occasional spoken threat. When he busts out a scream on the rock-club stomp of Hydrochloride, it’s almost comfortably normal. You can’t make out what’s being said half the time, but even this is a virtue, adding to an already claustrophobic vibe, rather than puncturing it by revealing too much of himself.

Being his eighth album in six years, among a huge amount of other works, the impression here is of someone who makes music as it comes, simply to get it out of himself, which gives Anti-Icon an impulsive, energised feel, without feeling dashed off or incomplete. Ghostemane knows who he is. That he expresses himself this articulately without giving too much of that away is in itself testament to his esoteric skills. Ironically, you could be seeing a lot more of Ghostemane in future. Sort of…

READ THIS: How Ghostemane is changing the fabric of heavy music