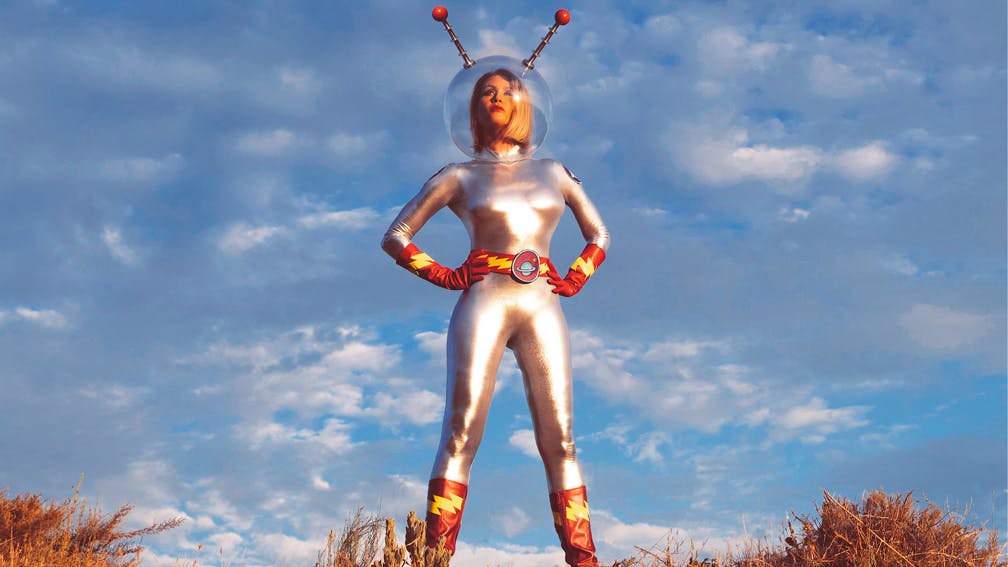 Goldfinger’s John Feldmann truly is the man with the Midas touch. Through his production and writing work with everyone from blink-182 to FEVER 333 (to be fair, you could insert almost any big rock band name here nowadays and you wouldn’t be far off) he’s become one of alternative music’s most prolific forces. So, we really should’ve guessed that during the pandemic he wasn’t going to sit on the couch and do sweet fuck all.

The band have been notably active in the past few months, releasing re-recordings of some of their biggest hits, including Here In Your Bedroom and their cover of 99 Luftballons, all recorded in separate locations at respective band members’ homes. But, it turns out, that’s not all they were working on. They also recorded a surprise new album, the follow up to 2017’s The Knife.

In addition to frontman Feldmann, bassist Mike Herrera (of MxPx), guitarist Philip Sneed (formerly of Story Of The Year) and drummer Nick Gross, the record notably also sees the return of guitarist and OG member, Charlie Paulson. An addition that has already been well received by fans at live shows (remember them?).

Sure, there’s an original member re-joining but, as the album title says, Never Look Back. Okay, yeah, the album art features the spacewoman from their debut’s sleeve, but so what? Right, right, there was the aforementioned recent spate of rerecording of classic hits… whatever. And yeah, we agree that the record landing shortly after the rerelease of Tony Hawk’s Pro Skater (synonymous with the band’s smash hit Superman) is perfect timing for nostalgic gamers. Look right, just because they literally have a song on this record called Golden Days, which has the chorus ‘Whatever happened to the golden days? What ever happened to the plans we made?’ that doesn’t mean they’re looking back, okay? It says it right there on the album sleeve.

This is the part where its tempting to say something like ‘sometimes, to look forward, you have to look back’ but – unless you’re reversing a car or you’re an owl – that’s almost certainly not the case. Nostalgia is treated like a dirty word. Yes, there’s a nod to the the past dotted here and there, but it’s all in the name of harnessing and enlivening the spark that makes the band special in the first place.

The quality of the songwriting and the delivery speak for themselves here. Musically, there’s no wistful rehashing of days gone by, just high-energy, feel-good punk rock that’s as sure of itself as you’d expect from a band with 25-plus years under their belt.

From turbo-charged, fist-pumping opener Infinite, to horn-laden, hands-in-the-air anthem The Best Life, all the component parts of a 24-carat Goldfinger record are present and accounted for. Other highlights include the short, sharp, shock of Nothing To Me, which is crying out for a circle pit (remember them?!), guest vocals from Save Ferris’ Monique Powell on Careful What You Wish For and the sun-kissed riffs of California On My Mind – a spiritual sequel to 2017 fan-favourite, Tijuana Sunrise.

For new fans, this is as good-an-entry-point as any in the band’s eight albums. For old fans, the record will scratch the same itch as blasting around a warehouse on Tony Hawk. Ultimately, whichever way you cut it, Never Look Back encapsulates everything great about Goldfinger.

For Fans Of: blink-182, The Interrupters, NOFX

Never Look Back is released on Dec 4th via Big Noise

READ THIS: In defence of ska punk

Is this real life?! Tony Hawk surprised fans at a tiny show in London where Pro Skater soundtrack covers band The 900 were playing.

An oral history of the Tony Hawk’s Pro Skater soundtrack, by Tony Hawk and John Feldmann

Two decades ago the Tony Hawk Pro Skater soundtrack changed the game; here, Tony Hawk and Goldfinger’s John Feldmann talk us through the music contained within.