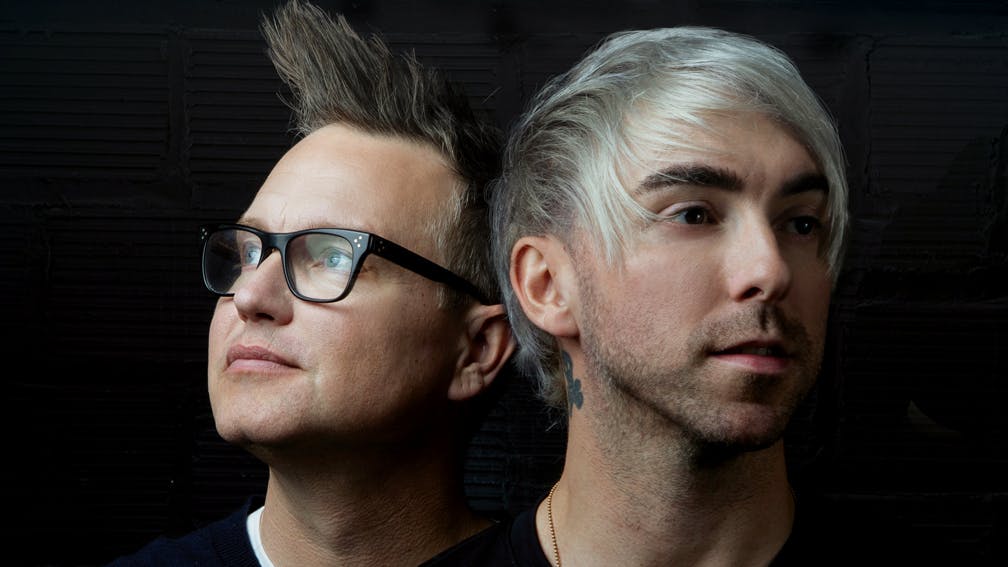 When Simple Creatures were in the studio last year, they were informed by a nearby listener that their early creations were reminiscent of the sound of lighting “a dumpster on fire”. It’s a description the band – a super-duo made up of All Time Low frontman Alex Gaskarth and blink-182’s Mark Hoppus – consequently ran with, going on to dub the noise they were making under this new banner as “trash-pop”, a term that’s more affectionate than one might first take it for.

At face value, this is possibly a slight exaggeration. Certainly, the electronic pulses of the six songs that make up Strange Love, the duo’s first EP, are considerably grittier and often more gloomy than the majority of either man’s back catalogues. But there are still plenty of the arena-bothering sing-alongs, infectious hooks and relatable lyrics that we’ve all come to know and love from both Alex and Mark’s day jobs, too.

Simple Creatures’ toe-dip into the darker side of rock makes even more sense when you consider where both All Time Low and blink-182’s trajectory has been heading in recent years. On the former’s latest full-length – 2017’s Last Young Renegade – Alex dabbled in the sort of laid-back, atmospheric pop (Drugs & Candy, Life Of The Party) that can be found splattered liberally across his latest venture. On that album, the frontman also began taking his lyrics in more introspective directions. In the blink-182 camp, meanwhile, Mark was also writing in a more pensive manner, though his classic pop-punk sensibilities were stamped all over 2016’s California. It was both natural and instinctual, then, to seek Alex’s ear, and together focus on darker themes, moodier tones, painting in a variety of altogether different strokes than usual on Strange Love. ‘Maybe there’s nothing left to save / You’re just the grass on a stranger’s grave / And I’m still ashamed of the wreckage I left in your life,’ he sings on the moody How To Live, while elsewhere, Alex confesses, ‘The water won’t boil / Think I’ve been staring too long / This house is on fire / And I don’t wanna get out of my bed…’ on EP closer Lucy, before detailing a failed bank burglary (‘Leave the handgun / Take the cash’).

Musically, too, it’s a different story from sunny, shiny pop-punk, with each of the six tracks on display here showcasing Alex and Mark’s various eclectic influences, drawing heavily from The Cure, new wave and ’80s synth-pop. The title-track’s reggae-inflected refrains demonstrate their wide-ranging palette, while EP highlight Adrenaline actually sounds like it could be a Nine Inch Nails song for approximately six seconds, before piling headlong into a brilliantly uplifting pop-rock chorus. If you’re hoping to hear Alex or Mark go full Trent Reznor, Simple Creatures aren’t quite there yet. But there’s real potential for further sonic expansion in the future, and that’s an incredibly exciting thing.

‘I had a premonition that tonight is getting strange / So I’m turning up the sound when you get in,’ galvanises Mark on lead single Drug – a three-minute banger packed with catchy ‘Na na na’s and what the band themselves have described as “ratty” riffs. It sums up Simple Creatures and their “trash-pop” perfectly: play it loud and get as weird as you like.