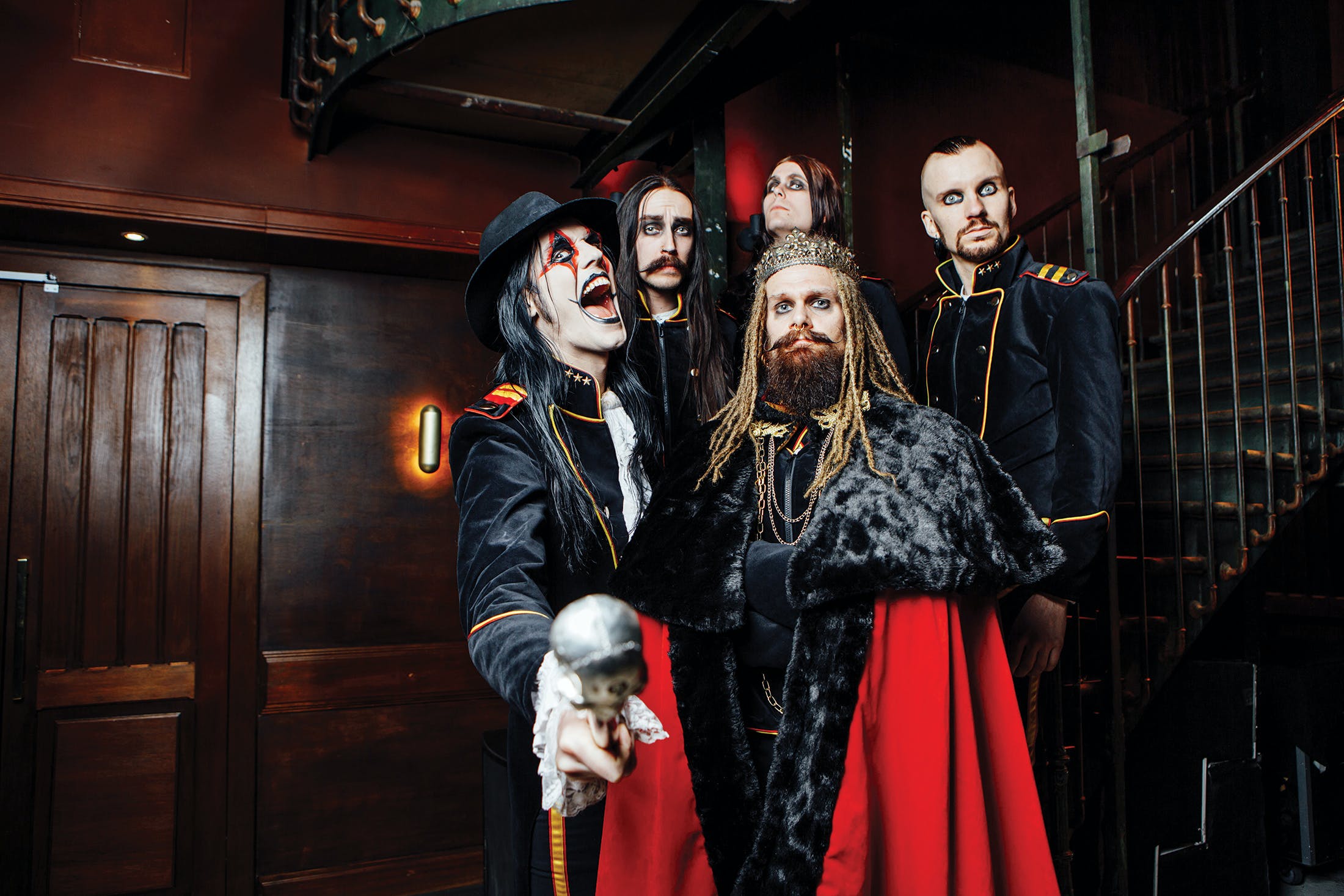 Looks, as we are so often reminded, can be incredibly deceiving. With Johannes Eckerström – the frontman of Swedish metallers Avatar and the character at the helm of their unorthodox circus – it’s virtually impossible not to judge the book by its cover. And yet backstage, ahead of their sold-out show at the 1,000-capacity Parisian venue Le Trianon, that mischievous ‘here’s Johnny’ harlequin grin is nowhere to be seen.

Instead, a softly spoken gent in skinny black jeans and a Hawaiian shirt introduces himself – pushing his glasses back to inspect the new faces in the room. Surrounded by full-length mirrors in golden frames, foosball tables, old Steinmann pianos and vintage synthesisers, he recounts the beginning of his journey into the clownish vagrant seen relentlessly wagging his tongue in their videos…

“Despite what people may assume from my looks, I haven’t started needing therapy yet,” he deadpans, his voice not much more than a whisper. “My childhood was happy and healthy. We all had lessons on the electric piano and were encouraged through classical music. I’m a middle child, though my younger siblings came a lot later – so I was the baby for a while and I still have that mentality. I think that’s quite common for those who end up in showbusiness – they often tend to be the youngest, just like politicians are often the eldest. I loved Beethoven so much, I wanted to become a conductor when I grew up.”

In many ways, Johannes ended up fulfilling that dream – albeit as a musical conductor of a different kind. He formed Avatar in 2001, with virtually the same line-up they have today, save for guitarist Tim Öhrström, who entered the fray just over a decade later. Tim joined Johannes, guitarist Jonas Jarlsby, bassist Henrik Sandelin and drummer John Alfredsson in time for their fourth album/breakthrough release Black Waltz, on which the quintet became a band reborn – starting with the video for its title-track…

“We needed to film it quickly,” says Johannes, as his bandmates start rifling through their military costumes. “To fit me in context to the music, we decided on a scary clown character…”

It was an abrupt decision that would forever change the fate of the young hopefuls. That day the frontman looked in the mirror and “it just clicked” – today citing Eddie Izzard as an unlikely yet remarkably poignant example of someone who tried something different and ended up sticking with it. The light bulb revelation not only registered with the lead track, but the hurdy-gurdy swing of their music as a whole.

“It was the moment we found out what our music looked like,” the frontman explains. “It started to have a feel, a smell and a taste…”

If you’re wondering where the difference between the Johannes speaking with K! now and the oddity that he will soon transform into lies, it seems they’re merely different shades of the same person. “It’s a bit like how you are on a Saturday night out compared to Sunday roast at Grandma’s,” he chuckles.

So how would this conversation be going if Johannes the clown was fielding questions?

“If I let that side of me out now, I doubt it would be a constructive conversation,” he teases. “I don’t think my behaviour and mindset would be fit for dialogue. I’ve read interviews where Corey Taylor says he puts on his mask and it brings out this other character. I guess with my face paint I am also covering my face, but it’s also exposing. I feel more undressed, almost.”

That’s a damn sight more complex than those who dismiss the band’s aesthetic as a gimmick would credit.

“I absolutely do not care for those who look at it that way,” comes the reply, with not an ounce of hesitation. “If we release an album that is truly awful, everyone else can move on and never think about it again. Only five people in the world need to live with it forever. On the surface people see a guy dressed as a clown and if that doesn’t suit expectation, it’s easy to call it a gimmick. That’s thinking skin-deep. But it’s not a gimmick to us. Like with Rammstein, Tool or Slipknot, the visuals fit. The same goes for Foo Fighters. I see them as a visual band too, it’s just that their music sounds like jeans and T-shirts.”

A knock on the door from the tour manager signifies it’s time for the five members to get ready and transformations to take place. Johannes insists on doing his own make-up – partly because he’s the only one who knows how, partly because his band can’t really afford a make-up consultant out on the road with them. Judging from the ticket sales on this headline run, that could be about to change…

“I’m a big pro-wrestling fan,” he shrugs, colouring in red and black circles around his eyes. “Steve Austin became the best in the business when he created his Stone Cold character. He couldn’t have done it any other way. That persona came from within – a real place that already exists, magnified. Same goes for me. My name is still Johannes, I don’t turn into Aragorn son of Arathorn!”

Once make-up is complete, with Joker-like exaggerations around his mouth above a thick layer of white, it feels a good time to explore the themes around this year’s seventh full-length Avatar Country. Just then, Tim presents us with a coin worth one million Avataros.

“Buy yourself something pretty,” smirks Johannes. “That coin is worth more than any other currency in the world. This is real money. It even has a picture of our king on it.”

Ah yes – the king at the heart of the Avatar Country concept is in fact guitarist Jonas, “the saviour of mankind”, who performs from a golden throne in their elaborate stage production. The frontman explains his royal majesty will be playing no less than seven solos in Legend Of The King. Suddenly it feels like this band are getting into character.

“You guys in England have your Queen, but it’s not the same,” says the clown, now sat behind an out-of-tune piano, softly holding the chords to Somewhere Over The Rainbow. He appears to be constantly smiling even when he’s not.

“I hear she doesn’t quite have a 100 per cent approval rating. The word ‘avatar’ comes from ancient Hinduism, when a god manifests itself on earth in the form of a human or an animal. Normally, people are reduced to choosing leaders among themselves. In Avatar Country, we ended up with this demigod. I won’t pass judgement on others, but in truth there’s only one true king.”

What happens if someone doesn’t address his royal highness formally?
“They all do,” asserts the monarch – notably a man of few words. “And if they didn’t, I would send them to prison. I would not call myself evil for doing it, I would call them treasonous. And anyways, death by hanging is always good fun. But it’s not a big issue, because that would never happen – it simply does not compute. Would you call a flower a banana?”

Erm, probably not. It’s a ridiculous notion that encapsulates this band in an unconventionally meaningful way – ludicrous on surface level, yet with a disarming amount of depth the further you dig in. The stage is set and the room is now theirs for the taking – it’s show time.

“We’re too much fun to be serious,” says Johannes, in between songs. After 90 minutes of dizzying lights, puzzling theatrics and royally heavy noise, the band catch their breath upstairs. Half of Johannes’ make-up has run down his face, coalescing into white beads of hard-earned sweat.
“Soon the whole world will be Avatar country!” he roars to jubilant cheers across the room. And despite the fading remnants of that joker smile circling his real grin, you get the feeling he’s being deadly, deadly serious…

Avatar are on tour in the UK now, tickets are available from their official website.