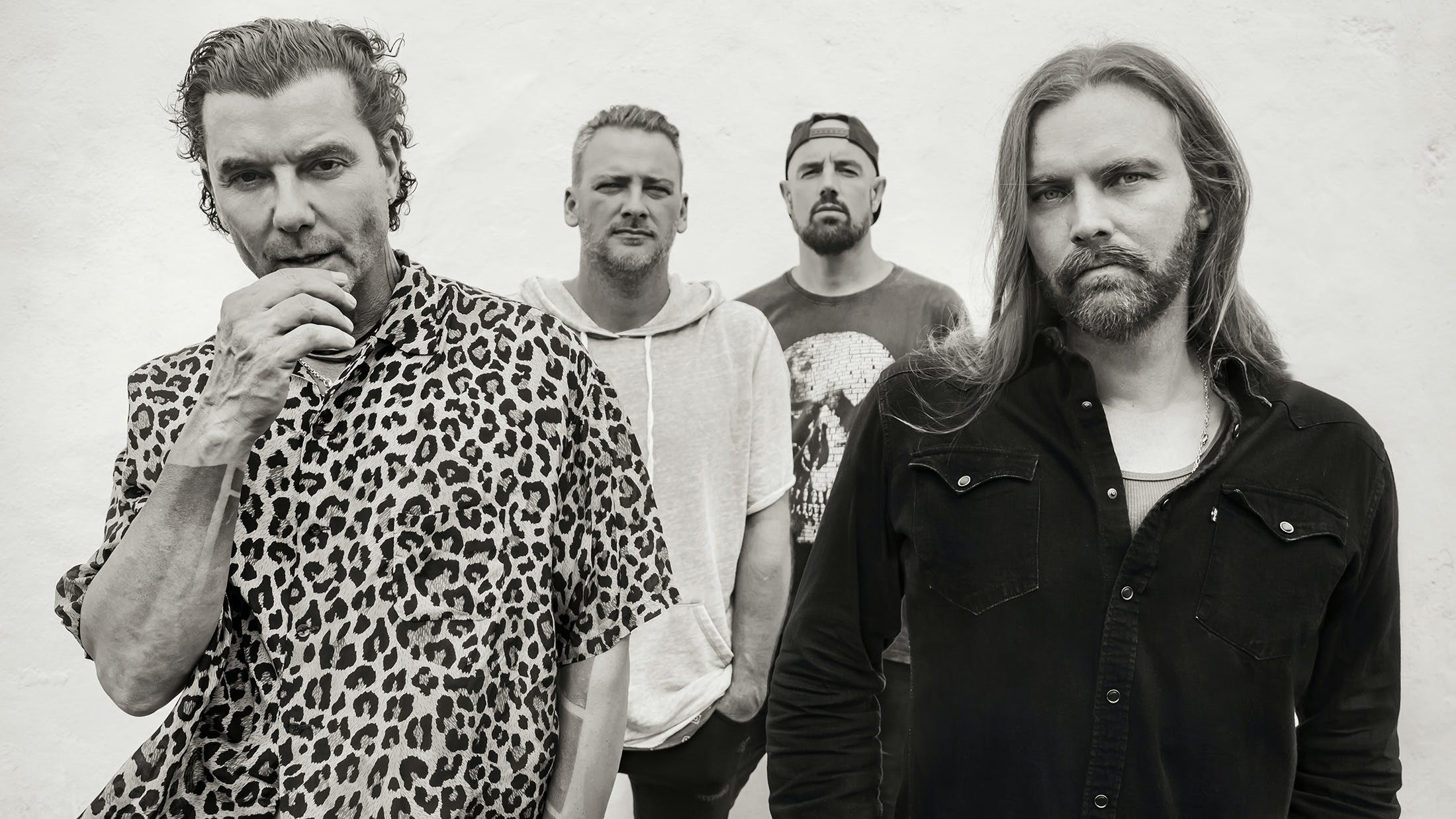 Gavin Rossdale has a lot on his mind. Right this second, other than juggling talking to Kerrang! and taking a room service delivery at the same time, his primary thoughts are with his sons. Today’s stop in Charlotte, North Carolina is one of the final dates on Bush’s current tour – “It’s felt like the longest tour ever, even though it hasn’t been anywhere near what we’ve done in the past” – which means there’s only three more gigs until he can get home and be a doting father again.

“Touring is fantastic, but it’s just toughest on my kids,” he says. “I’m out here on tour, but since I had kids I’ve been a major dad first. On tour you’re in a bubble, everything’s taken care of, it’s ridiculous. Then I get home and I’m a caterer, a watcher of three boys and all I think about is them. This bubble I get to be in on tour, it’s not full time!”

Still, it sounds alright. Right now Gavin and Bush are spending school nights in the arenas of America to which they’ve become accustomed, since the London band exploded across the pond in the mid-’90s thanks to their squillion-selling 1994 Sixteen Stone debut and 1996 follow-up Razorblade Suitcase. Before this leg, they were in Australia. Before that, at the start of summer, they played Download – and indeed, Donington Park – for the first time. It was a curiously overdue debut, even taking into account the oft-repeated and not-quite accurate line that they were the kings of America, but couldn’t get arrested back home (they were still massive, filling venues like Brixton Academy with the ease of falling off a greased-up log).

“I dunno why it’s taken so long to play there,” he chuckles, “we’re always getting put on festivals with metal bands, so you’d have thought it would have happened sooner. I have no answers for strange things like that. But it was good to be amongst it. The funniest thing for me was being backstage. I had an excellent veggie burger – 10 out of 10 for catering – but what I loved was hearing so many English techs backstage. That was fun to hear after hearing American voices for so long.”

Gavin’s good mood today is at odds with what sits among the songs on The Art Of Survival, the band’s new ninth album. Ask what’s been eating him to lead to lines like ‘This fuckery could be the death of us’ over a satisfyingly heavy riff on opener Heavy Is The Ocean (“It’s a great word, isn’t it?”), and you’ll get to what else has been on his mind. Everything, it seems.

“When I was writing, I had certain things that were going around my head,” he explains. “Obviously there's climate change, then things like, fires, earthquakes, rainforest disappearing, methane gas, all those problems, as well as things in my head."

Whether in the world or in your own head, what Gavin wanted to find and put into these songs was a universal theme connecting them all: everyone's got something going on. Often, you don't realise how much of that you share with other people.

“Everybody has a story. Everybody's fucking been through the wringer,” he continues. “But they feel like they're the only one who went through the wringer. I mean, things were so bad for so many people [during the pandemic]. And it just kind of hit me one day: that's what [the record] should be. And it makes perfect sense. Heavy Is The Ocean is sort of the universal acceptance of that – everyone's had mad suffering, but it's finding the way through it.”

There’s specifics, too. On the fuming More Than Machines, the singer rails against the attack on women’s reproductive rights in America, following the Supreme Court’s overturning of Roe Vs Wade.

“It didn’t make any sense to me at all,” he frowns. “I'm really lucky to have grown up in London, which is really progressive and mixed and pretty forward-thinking, so things like that in America seem really strange to me. You have these old boys in the Supreme Court, and one woman, telling women about their bodies. And I can’t get my head around that; governments getting involved in the most private and sacred area of a woman's journey.”

Elsewhere, on the fabulously-titled Judas Is A Riot, there’s an examination of people who “drink the Kool-Aid and worship a freak”.

“People believe other people's bullshit, and then weaponise that,” he sighs. “They drink the Kool-Aid and believe in the wrong people, and they don’t realise these people they’re worshipping are lying, or that they don’t give a fuck about them. [That title] is like, backstabbers unite. I’m just having a laugh with it, which is always the best thing to do in any sort of antagonistic situation.”

This isn’t the first time Gavin has looked at the world through such despairing eyes. On Bush’s debut album, 1994’s Sixteen Stone, the song Bomb was written about the (then still very active) IRA. On 2017’s Black And White Rainbows, it was the shocking events of the far-right rally in Charlottesville, Virginia, where a car was driven into a line of protesters, killing 32-year-old activist Heather Heyer. The band’s last album, The Kingdom, from 2020, was partly based on a thematic uprising that tied up with “racial profiling in America”.

Put it to him that there’s actually a lot more politics in his music than is often credited, and he mulls it over with eyebrows thoughtfully raised, before offering a response. He’s not a politician. He’s a human.

“I feel proud of [songs like More Than Machines] because I believe in that, but it doesn't make us a political band,” he says, “more like humanists. That's it. I love life, and I love freedom. It's all just human emotions, and human emotions are about fighting every day, because everyone's trying to fuck us down.”

This is a bit of a darker take than John Lennon took on Imagine, isn’t it?

“But the reality is, the world is so cutthroat,” Gavin says. “I mean, how cynical is it now? Everything you try and do, everyone tries to add extra on it to make up for the past two years, where you haven't earned any money either, but they are hoping that you could come in and just take care of the two-year deficit. You’ve got BP and Shell saying fuel prices are nuts and that we shouldn’t be buying fuel from Russia, and then you see they post record profits. And the people that couldn't work, or were struggling to get to work, had to pay for these massive bonuses...

“It’s so cynical, and they'll never stop fucking with us, and we can't do a thing about it,” he continues. “Well, you can do a little bit. That's why your bravery will save this world a bit. Because it's like, when you stand up to all those factors, and you find a way through, you make the world a better place. And if you don't hate other people, you will make the world a better place.”

Gavin Rossdale isn’t cynical. He’s not even angry, even if his lyrics reveal him as a man who doesn’t always like what he sees. In conversation, he laughs a lot, and talks about his music and lyrics with enthusiasm. He also has the vibe of a man actually very content with his lot. He opines at one point that music connects people because it’s such a broad-strokes thing – you can see where someone’s coming from, even if the detail is more vague. He also ultimately thinks music is a force for good.

Example: at Woodstock ’99, following Korn’s rambunctious set on the Friday night – during which punters in the pit later told of not being able to touch the ground, such was the en masse movement of bodies – Bush performed. In Netflix’s recent documentary, Gavin reveals that he and his band were asked to try to mellow people out, to flare-off some of the energy that had built up. They still didn’t quite get it, though.

“I love my sort of naiveté in the fact I, classically, completely didn't get the memo about what was going on,” he laughs. “I just walked out onstage. We came in from a bubble, landed onstage in a bubble, but had a beautiful time. In retrospect, it's like if you didn't know anything about skiing, and you just like, came down the mountain really fast with no idea of what you were getting into. If someone had told me where we were on that bill, after Korn, and what it’d be like, I’d say, ‘No one should go on that slot,’ you know. Put a preacher on, maybe!”

Gavin isn’t a preacher. Doesn’t want to be. He’s a songwriter and a dad, and these days his view on his reluctant status as a British rock icon is: “If you make good records, you get to keep doing this for a bit longer.” But, he says, if you’ve got something on your mind, a song is a good place to put it.

“I'm not telling people what to do or what to think,” he says. “Some people just want to get lost in music, and don't care about the words, and that’s cool. And for some people, the words are everything.”

And where do you feel you sit there?

“I just don’t want to feel like I’m finger-wagging,” he laughs in closing. “No-one wants to be wagged at in a song!”

Bush's new album The Art Of Survival is out now – stream/order your copy here.