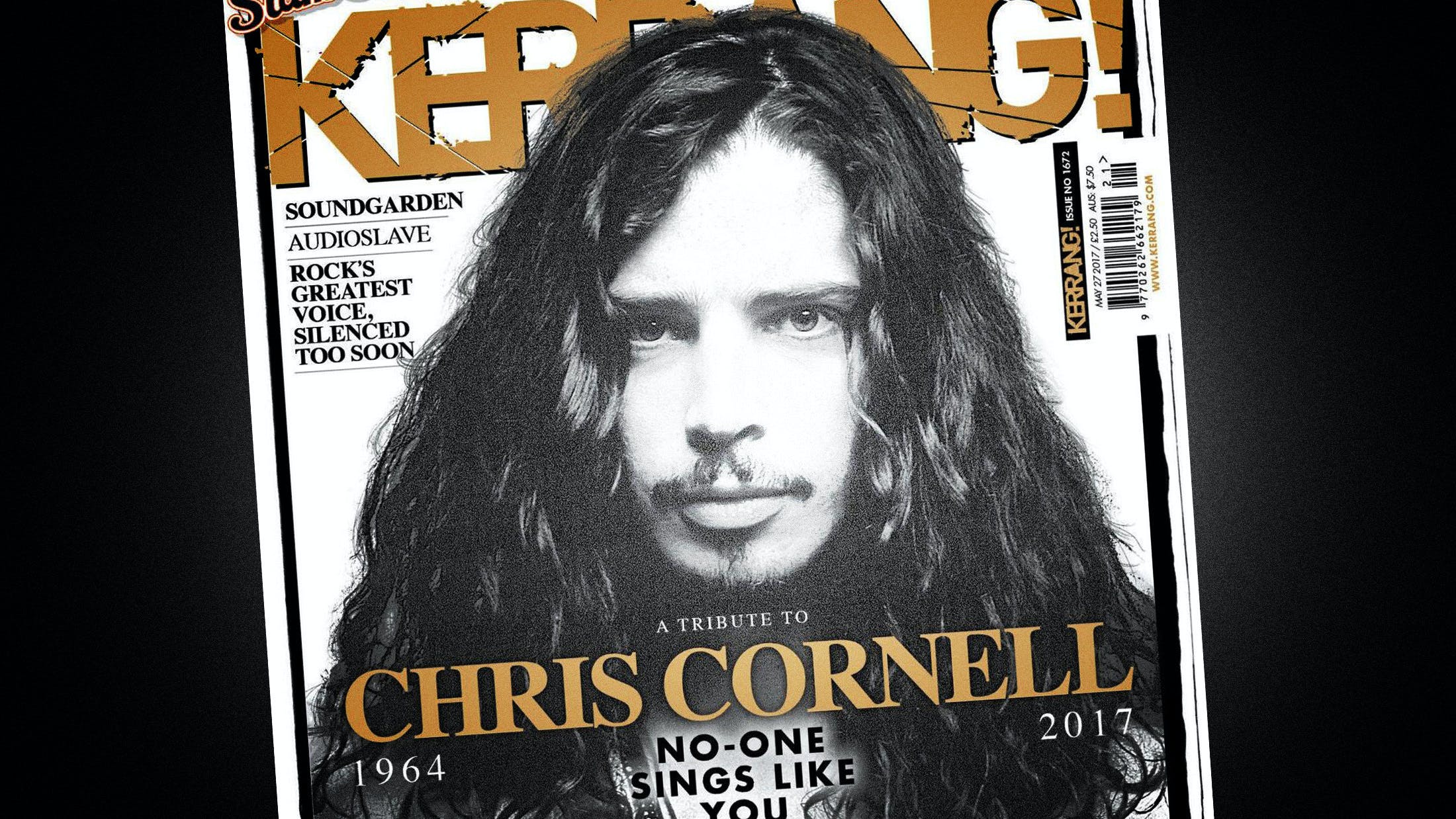 Four years on from the tragic loss of Chris Cornell, his incredible music and legacy continues to captivate and inspire. It always will. From Soundgarden and Temple Of The Dog to Audioslave and his solo career, he led an extraordinary life in music – and Kerrang! was there to witness much of it first hand. If there was one common thread to his interviews with us over the course of more than a quarter of a century, it was his constant desire to draw attention to the gulf between the reality of a rockstar’s life vs. the public’s preconceptions. Throughout his career, he was deeply unimpressed by fame; a man trying to locate whatever truth he could, amid the ever-expanding mythology of rock’n’roll. Here we look at his story as it appeared in our pages…

Having already created quite the buzz on the back of Ultramega OK and Louder Than Love, the first time Chris Cornell graced the cover of Kerrang! it was as part of a question we posed: “Are these men from Seattle the future of metal?” Given Soundgarden had just released Badmotorfinger, a record that even in 2018 still sounds like it’s travelled considerably far back in time to the present day, it was perhaps a redundant question. In our cover feature, K! scribe Don Kaye unequivocally labelled Soundgarden “the most brilliant band to hit the planet since Slayer unleashed Hell Awaits” before meeting the band in New York. Even as early as then, Chris Cornell boasted a healthy scepticism of fame. “One day you’ll hear a lot of positive things and then the next day you’ll hear negative things,” said Chris. “It inhales and exhales. Sometimes there are moments when it seems like there’s this sort of Soundgarden hype ready to burst and rain down on everyone, and then other times it seems like we’re still lost…”

About that “Soundgarden hype”… In April 1992, it had well and truly struck. When K! reconvened with the band, they were touring American arenas supporting a plucky bunch of underdogs called Guns N’ Roses. Some in the alt.rock community saw the pairing as something of a betrayal; grunge, after all, was supposed to be the antithesis of the debauched legacy of ’80s rock. “A lot of it is blown out of all proportion,” Chris told K! journalist Stefan Chirazi about life on the road with Axl Rose and co.. “With Guns, a lot of the reports about how they handle their success and what they do aren’t true.” While he played down any notion of rock excess, he did note that being called a rock god was starting to rankle. And it would continue to do so from then one.

When K! travelled to America to catch up with Soundgarden on tour with Neil Young in 1993, we were greeted by a freshly shaven-headed Chris Cornell. Naturally, our cover story bore the headline: Shaved ‘N’ Dangerous. Hey, it was a different time. A new hairstyle wasn’t the only change. They had already started road-testing some brand-new songs with names like Spoonman, Kickstand and My Wave, but when it came to the title of Badmotorfinger’s follow-up they weren’t giving up the goods. “We were thinking about Three Years, Eight Days And Four Minutes In The Life Of Arrested Development,” joked Chris to Don Kaye. “Or we might just cop out and call it Soundgarden.” It was, of course, actually soon to be called Superunknown – the record which would help define a) Soundgarden to the masses b) grunge c) the ’90s d) an exemplary way of selling millions of copies without compromising e) any album collection worth its name.

Soundgarden were in Melbourne when K! next checked in with them. Superunknown wasn’t out and yet the band, like Nirvana and Pearl Jam, were struggling with the trappings of the music business. More than ever before, they were aware that the simple act of being themselves in the spotlight was fraught with difficulty. “A lot of the public wouldn’t want to meet us,” Chris explained to K! writer Morat. “Because we won’t always be agreeable or happy. It’s not that we don’t appreciate fans; it’s just that we’re that way with each other, friends and family sometimes. We can’t pretend, we can’t be the game show hosts…”

A lot had changed in 1994. With Superunknown unleashed into the world – boasting a gargantuan single in the form of Black Hole Sun – Soundgarden were officially one of the biggest bands in the world. But it was also the year that grunge lost its avatar. As the world continued to ponder what, specifically, drove Kurt Cobain to take his own life, Chris – finding parallels in his own experiences as a frontman – was quick to dispel any theory that reduced Kurt’s death to one overriding cause. “It wasn’t just: this guy’s a heroin addict and it made him crazy and he killed himself,” he told K!’s Mörat in New Orleans. “Or: this guy gets bothered by teenagers and he hates it so killed himself.”

In 1997 Soundgarden imploded, calling it a day shortly after escalating tensions in the band came to a head with one disastrous show in Honolulu, Hawaii. But before all of this, K!’s Mörat headed to Seattle in a feature that found the band in high spirits but not dysfunctional on the back of their perennially overlooked fifth album Down On The Upside (when was the last time you listened to Tighter & Tighter? Do it. Do it now). Just as our humorous photoshoot drew attention to the playful side of a band so often presented as consummate miserablists, so too did their quotes. “My friends are cool about my money. But then I did give them all motorcycles…” deadpanned Chris.

Two years later, Chris Cornell joined K! to reflect on what happened to Soundgarden, stressing how lucky they had been to have the success they did while also expressing regret that they didn’t enjoy the experience more. It wasn’t all sad news, however. Our September 1999 cover also heralded the launch of his solo career with his bona fide classic Euphoria Morning, a bruised, haunting debut. Speaking to K!’s Mörat in a darkened Hollywood hotel room, Chris reflected candidly upon his childhood and the role depression had played in his life and music. “There’s times when you think, ‘Fuck, I wish this didn’t mean anything to me, I wish I was one of those happy people,’” he said. “They don’t get the low-lows. But then they don’t get the high-highs, and I would never trade that.”

“The first time I walked into the room when those guys were just jamming, it sounded incredible,” Chris Cornell told K! writer Ben Myers of the time he stumbled into seeing Rage Against The Machine men Tom Morello, Timmy C and Brad Wilk. “After some brief thought, I realised I couldn’t come up with a reason good enough not to do this band.” And so Audioslave was born. For some, pairing the howling voice of Soundgarden with the incendiary musical backbone of RATM was an idea that was simply too good to be true. No way could they live up to that kind of hype, they argued. Imagine how refreshing it was, then, that the mammoth classic rock strains of their 5K-rated self-titled debut lived up to fans’ wildest dreams. And then some.

When K!’s Alexander Milas joined Chris, Tom Morello, Timmy C and Brad Wilk for our cover story in 2005, they were a band growing into their own skin. And that included the decision to finally embrace their combined heritage. After initially ignoring the wealth of material at their disposal, Audioslave had taken to covering both Soundgarden and Rage Against The Machine songs. Fans were going wild. Not only were they resurrecting the likes of Spoonman and Killing In The Name live, they were also preparing to unleash their second outing Out Of Exile, an album that saw Chris tackling the recording sober. “Getting cleaned up changed a lot for me,” said Chris. “I’m not the kind of person who wants to know or sit back and analyse things, but I’m a new man now…” Audioslave would return the following year with their final album, the perma-underrated Revelations, before disbanding shortly afterwards. Their legacy includes some of the greatest songs of the ’00s.

When Chris Cornell united with legendary hip-hop producer Timbaland for a solo album of futuristic R&B in 2009, it drew reactions ranging from bemusement to downright anger. Those questioning and/or mocking him were soon forced to eat their words in the form of the incredible reunion of Soundgarden. Their comeback record, King Animal, captured the band’s unique musical alchemy in world-beating fashion, from the twisted, unwinding riff of Non-State Actor to the disenchanted beauty of Black Saturday. The world had missed them, and they had missed each other. “It’s been a long time coming,” Chris told K! writer Tom Bryant. “After 15 years, we got back together and made one of our best albums. We still have something else to say about rock music that no-one else is saying.”

In 2015, in his final interview with Kerrang!, Chris Cornell was in an inquisitive mood ahead of the release of his fourth solo album, Higher Truth. In a conversation that ranged from the distractions of the Internet age to mankind’s need for comfort in religious higher powers, he was a man seemingly more in love with the potential of life than ever before. “Now I’ve started having children I was surrounded by it all the time and thinking about it all the time,” he told your correspondent. “I think we start out just fine [in life]. We start out very connected with the wonder and amazement and miracle of the fucking world. But we get corrupted by a lot of insecurities and self-consciousness, and the pressure of surviving and the strange selfish nature we have with other people, no matter how close we are.”

On May 18, 2017, Chris Cornell took his own life, a loss that continues to reverberate around the rock community. “No-one sings like you anymore,” read the coverline of our tribute issue. But with Chris Cornell, it wasn’t just how he sang, but what he sang. How, time after time after time, his words offered a sense of hope to others even when he struggled to find it for himself. It is for that very reason memories of him will always live on. ‘The past is like a braided rope,’ he sang to us on 2016’s Through The Window. ‘Each moment tightly coiled inside.’