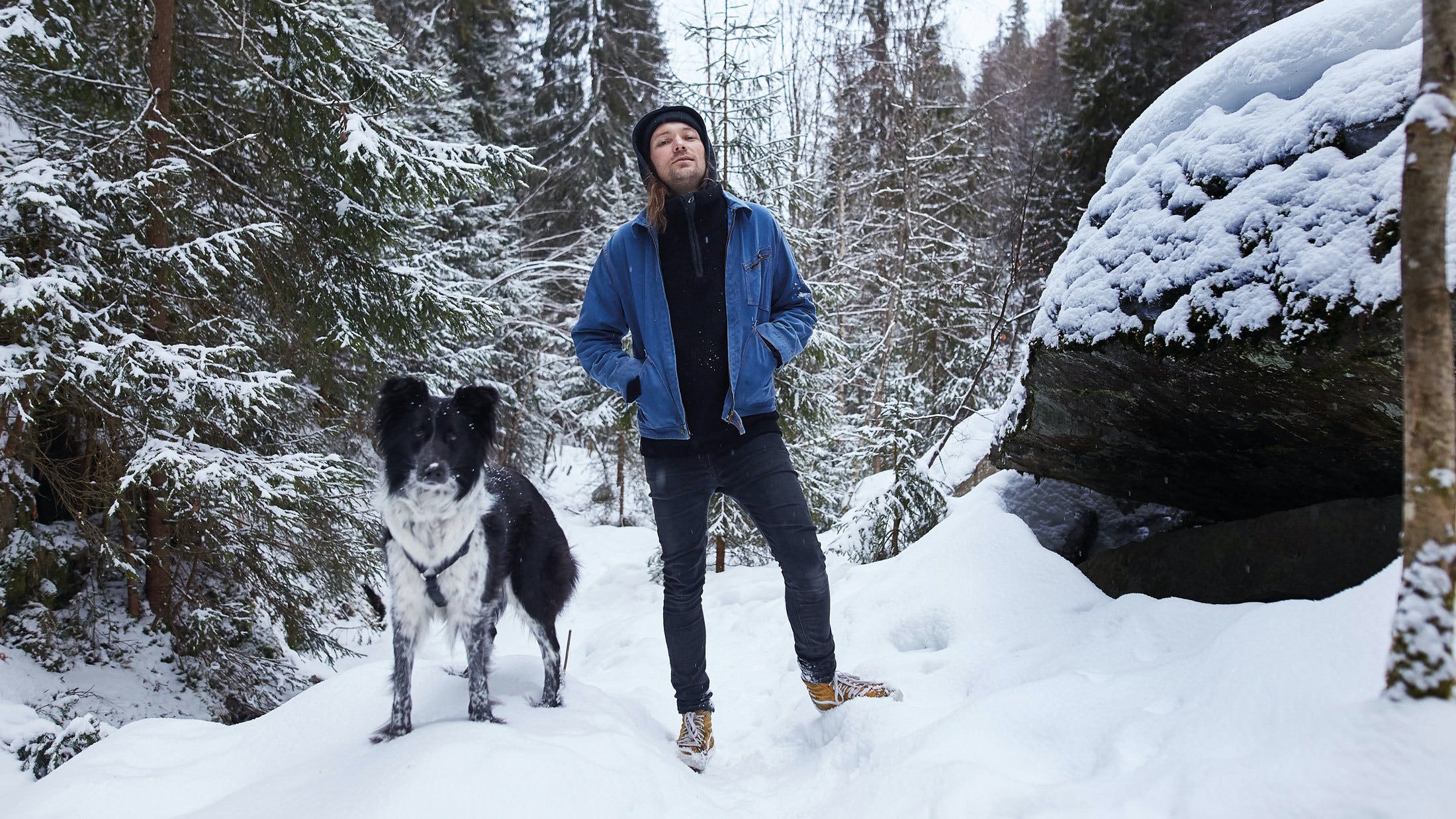 Around mid-February last year Ivar Nikolaisen began to realise what he’d let himself in for by agreeing to join Kvelertak. It was during the final days of a successful excursion warming up crowds for Mastodon, Ivar’s first proper tour of duty since he emerged as the Norwegian sextet’s new singer in July 2018 following the departure of vocalist Erlend Hjelvik. Someone commented that it had been the most fun, conflict-free tour they’d had in years.

“I was like, ‘What the fuck?’ because these guys are fighting all the time,” Ivar says, slightly shocked. “They’ve been touring for over 10 years and that’s the way they talk to each other, screaming and almost fighting?! At the beginning I thought, ‘Oh shit, is this normal? What was it like before I joined?’”

“There are a lot of strong personalities in this band,” cackles guitarist Vidar Landa alongside bassist Marvin Nygaard, drummer Håvard Takle Ohr and fellow guitar players Bjarte Lund Rolland and Maciek Ofstad. “It makes for a lot of arguments. We’re like a dysfunctional family, but it’s a different vibe now.”

Although Kvelertak’s fourth album, Splid, marks Ivar’s first full record with the band, he’s been part of their extended family since the beginning. Even before Ivar guested on Blodtørst from Kvelertak’s 2010 self-titled debut, the band cut their teeth in 2008 by opening shows for Ivar’s old glam-punks, Silver. However, Vidar reveals today that he was nervous calling him up to join Kvelertak – although not for orthodox reasons.

“We always wanted to be in a band with him, but didn’t think he would be interested!” he explains. “You didn’t see him around town. I heard he had quit all his bands and moved into the woods…”

Take a 30-minute drive north of Oslo until the roads get narrow and you’ll find yourself enshrouded in the vast Nordmarka woodland. During the summer the hills are teeming with hikers from the city; in winter it’s a spruce-lined hive for skiiers. If you wandered around the cabins that litter the area then you may have met Ivar Nikolaisen – he’s been living there with his dog since 2008.

“I’m a pretty primitive guy,” Ivar explains today as he munches on a piece of bread with cheese, sipping his third beer of the day. “Electricity in Norway is probably the cheapest in Europe, but I couldn’t even afford that. In Nordmarka there are so many cabins where nobody is using them anymore and you can just move in there, so I didn’t have to pay any rent or anything. I had to choose between beer and electricity, so I chose beer.”

Ivar’s life as a punk rock hermit was purely a pragmatic pursuit rather than a romantic one, and easier in summer. He would bathe in rivers and illegally poach huge lake trout from Maridalsvannet, which also provided clean drinking water. If the cabin owners ever turned up to find they had an unexpected guest, Ivar would sweet talk them, then move on to another vacant shack. In the grip of dark Scandinavian winters, though, woodland living was grim.

“Up there in the woods it was so cold that my hair would be frozen to the pillow when I woke up,” he remembers without fondness. Over the decade Kvelertak’s fortunes were rapidly outstripping his own, the now 41-year-old earned his crust by working construction. “It sucks. It’s really heavy, hard work and getting up early in a cabin is even harder because it’s so cold. You just want to die every morning when you know you’re going to spend eight hours on a construction site with a boss who’s a jerk.”

During this period, playing in bands was purely a fun distraction from the monotony of hard labour and even harder living. Tours with self-destructive punk unit Happy Dagger and cult darlings The Good, The Bad And The Zugly were luxuries that came with the bonus of a hot shower and a warm bed for the night (“I always brought my clothes so I could wash them, because they don’t really get clean in a cold river,” he adds). “I know it sounds boring, but I’ve never felt the need to make music,” says Ivar, who simply sees himself as “a guy in a band with attitude,” and no backup plan.

Ivar was down, but by no means out. Unbeknownst to him, though, his path would soon converge with Kvelertak once more, but not before his friends would experience their own years in the wilderness.

“We did have fun, but it feels almost like a different life,” says Vidar, recalling the storm of popularity and accolades whipped up by their debut and 2013 follow-up Meir. “We played at a venue called Slim’s in San Francisco, and when we went onstage James Hetfield was in the front row, headbanging. He came to say hi afterwards. It was unreal.”

With friends in high places and America embracing their wild clash of black metal, punk and fist-pumping rock, the whirlwind effect intensified as Kvelertak found themselves sharing stages with Slayer, Anthrax, Gojira and Mastodon. Meanwhile, the power metal flirtations of 2016’s Nattesferd made them a no-brainer to open Ghost’s Popestar tour, before Metallica personally invited them to open the European leg of their mammoth WorldWired Tour in 2017.

But as the legend of Icarus warns us, fly too close to the sun and you’re bound for a fall. From the outside Kvelertak were soaring, but behind the owl mask things were starting to unravel. Erlend voiced his desire to quit just before the Metallica tour.

“It was especially weird at that time when somebody wanted to leave the band while everything we had worked really hard for all these years was finally happening,” says Vidar of the strangeness of having to win over huge arenas as a united front while internally paths were diverging. Original drummer Kjetil Gjermundrød would also step away in 2019 to form Tempel with his brothers. “Not only with the Erlend situation, the whole vibe of the band was we were burned out. A lot was coming through managers, so we left our management and tried to regain a little control by actually talking to each other.”

As the remaining members closed ranks and began brainstorming a successor for Erlend, Ivar Nikolaisen’s name kept coming up. In fact, it was the only name they could think of. “We didn’t have anyone else on the list!” Vidar stresses, adding that it helps Ivar sings in the same Rogaland dialect as the band. “We’ve always been big fans of Ivar. In the back of our minds it was always him.”

As it happens, when Vidar nervously placed the call to Ivar in May 2018 asking him to join the band, Ivar was ready to leave the woods for good, and even admits to being a little awestruck by the offer. “The first time they called me I just thought it was so cool that they wanted me, because at that time I didn’t think I was worthy of being in ‘that big band,’” says Ivar, who behind his Axl Rose-esque front is really a sweetheart. Vidar for one was never in doubt that Ivar would duly smash his debut at July’s Fjellparkfestivalen, though. “Onstage he’s almost like this saviour of rock, and I can’t take my eyes off him,” he beams, adding that Ivar’s punkish zeal has injected fresh life into the band. “It’s a wild energy I’ve missed, because I think one of the most important things in rock is that feeling where you don’t know what’s going to happen next.”

That rejuvenated spirit and unpredictable chemistry courses through their new album, Splid. Returning to GodCity Studios to record with Kurt Ballou, who also produced their debut album and Meir, the band channelled all the tumult and uncertainty of recent years into a freewheeling collection of ambitious yet party-ready moshers that channel the seismic sprawl of Gojira in some songs, and the playfulness of Queen on the track Fanden Ta Dette Hull!.

“This band was and still is chaos,” Vidar chuckles, “but I think this whole experience has brought us closer together. It’s made us realise what we have is something pretty unique and we shouldn’t take for granted. I think this whole album is a really good representation of where we’re at now.”

And what does this record represent to you, Ivar?

“Money money money!” hoots the frontman, admitting that he still worries about waking up tomorrow to icy cabins and construction sites. “I am really thankful to the guys, though. Really, this album is probably the most important record I’ve been involved with. I hope this is the beginning where I can be part of building something new.”

READ THIS: The greatest Metallica videos of all time

Norway’s finest, Kvelertak, return with a new singer and a newfound power…