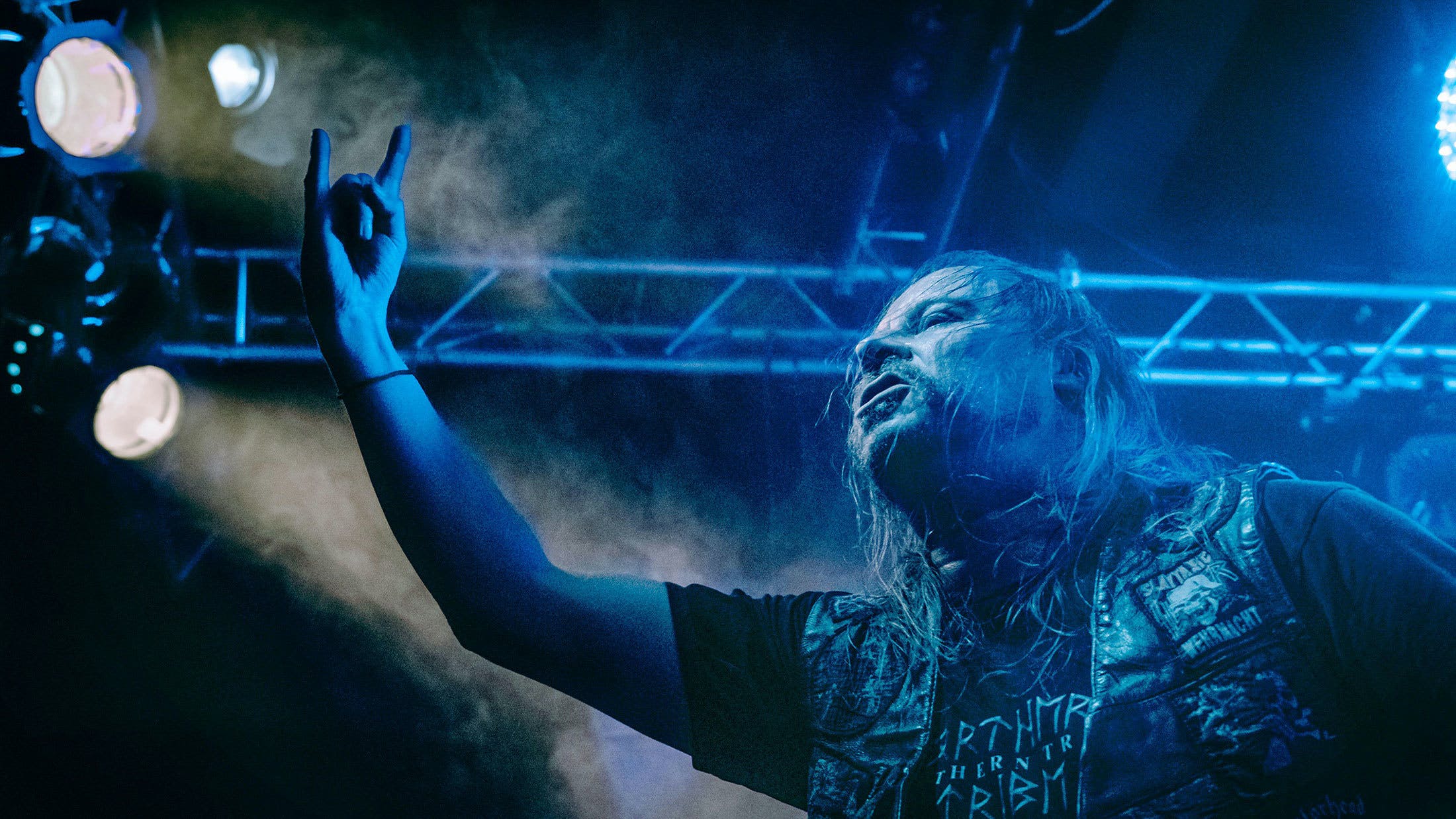 During Entombed's first trip to London in the early ’90s, the band were shot by a magazine under the iconic sign for the musical Les Misérables outside the Palace Theatre, in a joking nod to how dour the Swedes seemed. Funny as this wheeze surely was, though, it was also particularly wide of the mark, particularly when it came to singer Lars-Göran 'LG' Petrov.

A metal maniac with an infectious enthusiasm for music and a warm sense of humour, LG’s gurning expressions and clear delight in what he was doing, onstage and off, actually made him the smiling face of death metal, for whom this music was as exciting and fun as it was brutally heavy. What was wild-eyed and hellish in his delivery on albums like Entombed’s essential (and unfathomably influential) Left Hand Path debut and Wolverine Blues, was also the work of a bloke simply loving both life and death metal.

Born in 1972, as a teenager in the mid-’80s, young LG became heavily involved in the metal underground, having discovered bands like Iron Maiden, Metallica and Bathory. As a fan, he became heavily involved in tape-trading, while as a musician, his first output was behind the drumkit for Swedish death metal outfit Morbid, in which he played with future Mayhem singer Per Yngve ‘Dead’ Ohlin under the name Drutten. In 1988, he joined Stockholm deathsters Nihilist, getting the job after he impulsively jumped onstage with them at a gig. Eventually, Nihilist would become Entombed in 1989, and become one of the most important bands in death metal history.

Entombed were classic on so many fronts. Their buzzing, ultra-thick guitar tone from a Boss HM-2 pedal cranked to full lives on today in a new generation of metal and hardcore bands who have turned said pedal into both a sought-after bit of kit and a genre of sorts in its own right, while their punk influences and a sense of groove brought to the table elements that expanded death metal’s palette considerably. As the frontman for such face-scrunching metal mayhem, LG was the perfect cheerleader, onstage seeming like a fan who’d got lucky to get to play this stuff. Which, in many ways, he was. Even after he split with Entombed to form Entombed A.D., this sense of addiction to death metal was front and centre.

He was also a tremendously nice and funny man. The last time we saw him, at Bloodstock a few years ago, we had to pause our interview in order to fully appreciate the sounds of King Diamond’s The Arrival coming from the nearby beer tent. Back in 1997, one memorable quip came when he and Entombed drummer Nicke Andersson took The Kerrang! Challenge, during which he was asked a question about Oasis. “They have a great attitude,” he said of the Gallagher brothers. “If the music was good they’d be the best band ever.”

Behind all this lay a positivity and a never say die attitude to life. When he was diagnosed last year with cholangiocarcinoma, a cancer of the bile duct, he never allowed it to get the better of him, saying that the way to deal with it was to “Fight, fight fight”. Sharing pictures from his hospital visits, he often had that same gleam in his eye as when grinning and headbanging during a festival show.

The legacy of LG Petrov is enormous. When the news came out that he was sick, Converge announced that all the proceeds from their Entombed covers EP would go towards covering his medical expenses, while in the wake of his passing, tributes have come from both inside and out of the metal world. Amon Amarth’s Johan Hegg said, "The word legend is too small to describe LG and what he meant for me as a friend and inspiration. Not only was he one of the best and original voices in metal, but the most kind, humble, funny and genuine person one could ever hope to meet. I will miss you my friend! R.I.P"

Peter Tägtgren, of Swedish death metallers Hypocrisy and until recently part of Rammstein singer Till Lindemann’s solo venture, wrote, “You inspired me to growl, even if we didn’t sound the same,” while Orange Goblin called him, “always funny and a great person to be around,” and Brit punks Nervus recalled, “Left Hand Path was genre defining. One of the first things Nervus ever did was an Entombed cover.” Therapy?, meanwhile, tweeted: “Incredibly sad to hear about the passing of LG Petrov, a metal legend onstage and off. We had the pleasure of his company many times over the years and he was a true gentleman,” while Frank Turner added, "Sad to hear about LG Petrov. Wolverine Blues is one of the best heavy records ever made."

"I will never forget being 15 sitting in my friends bedroom (dark red lightbulbs and incense burning because we were “dark lords”) listening to Death Metal records for hours," recalls Killswitch Engage's Jesse Leach. "When he put this cassette [Left Hand Path] on, from the first scream as the song starts to the amazing doom style breakdown and solos, I was entranced... That voice though - just raw unrefined brutality!" Sammy Urwin of Employed To Serve called him "an absolute legend. LG embodied heavy metal and his music will continue to do so. Thanks for being cool with me telling you how much I love your band on multiple occasions."

It’s this wideness of tribute and uniform hailing of the man that says much about LG Petrov – a likeable, big-hearted, occasionally oafish man whose music touched many. As Johan Hegg says, this smiling, gurning, roaring man will be missed. Farewell, Chief Rebel Angel.

After being diagnosed last year with incurable cancer, Lars-Göran Petrov of Entombed A.D. has sadly passed away.