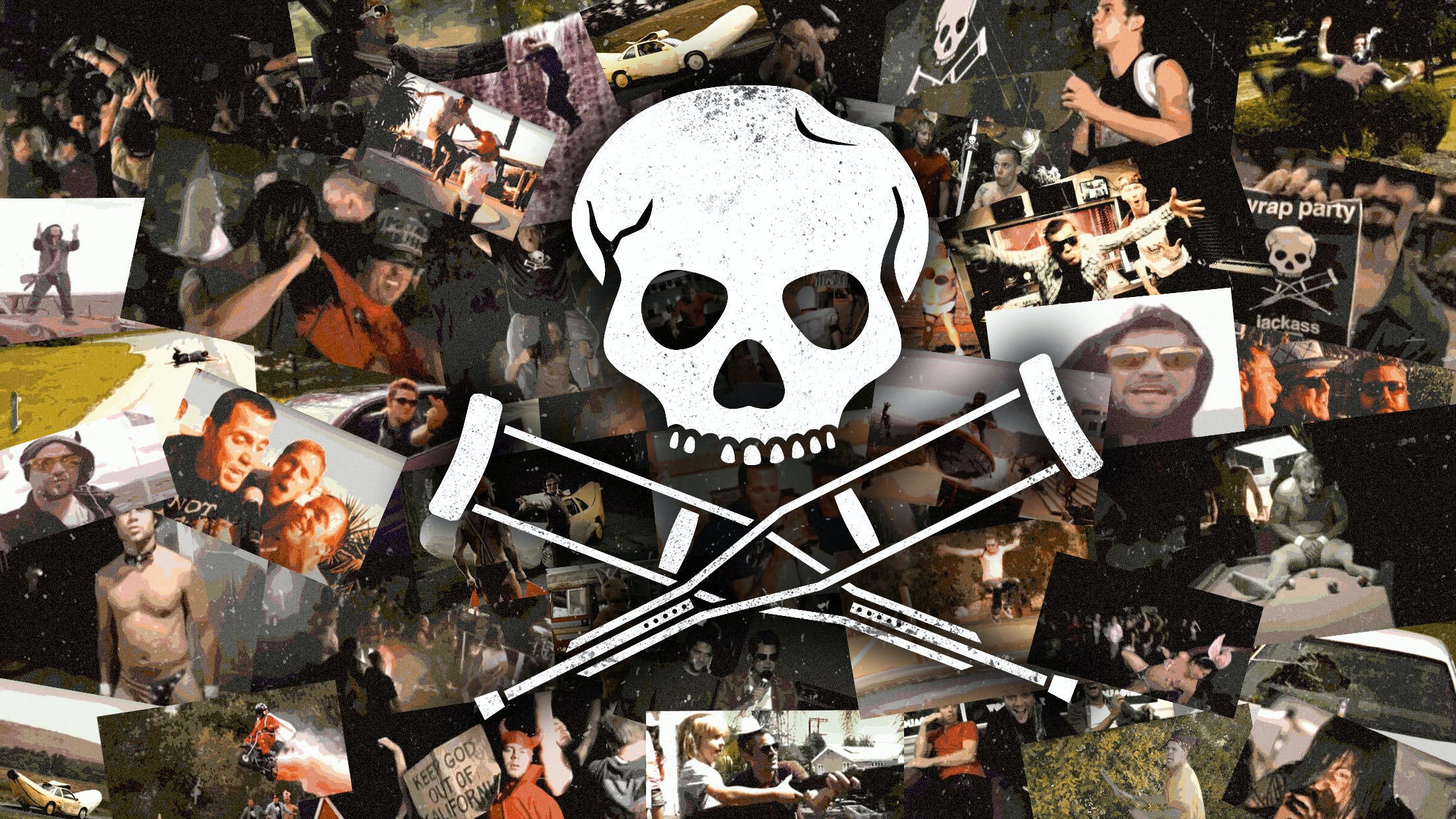 Eventually there’ll be a fourth proper Jackass movie, once coronavirus passes and people sticking their butts in each other’s faces becomes light-hearted and prankish again, and a big group of ageing shirtless dudes sweating all over each other stops being paranoia-inducing. In the meantime there are the TV episodes, the three ‘proper’ films, the two ‘point five’ films, Bad Grandpa and Action Point to binge on… but what else?

There’s a fat old load of Jackassery to be found in the world of music videos – sure, you might have seen the films so many times that you see every bollock-kick coming, but how long is it since you saw that Andrew W.K. video where they’re all really drunk? Great stuff.

Hey, let’s all go and play Tony Hawk’s Pro Skater 3! It’s the riff that grazed a million knees! CKY have had an odd career, in that their drummer’s little brother’s promo videos for them accidentally catapulted him to global stardom and they were constantly at risk of being upstaged by one of his pals mucking about in a cape. Still fun, though! So many impacts! So much showing off! Bam Margera directed another 12 videos for the band over the years, as well as videos for HIM, Clutch, The 69 Eyes, Turbonegro, Viking Skull, Vains Of Jenna and various musical projects of his own.

Shot at the wrap party for Jackass: The Movie and featuring Andrew W.K. giving it his absolute all, there’s a lot going on in this one. Highlights include Johnny Knoxville skanking, Andrew W.K. lifting the 200kg boxer Butterbean on his shoulders, Chris Pontius taking a pool ball to the testicles, a lot of people falling off a large ramp and some incredible drunken intensity from a lot of them. It very much looks like everyone involved took the line 'We wanna have fun and we wanna get wasted' very seriously – you can pretty much smell this video.

Bam Margera has been friends with Bloodhound Gang for a long time, with the band making multiple appearances on Viva La Bam and both being early adopters of (and pals with) Ville Valo and HIM. The lead single from the band’s album Hefty Fine is basically a series of complicated euphemisms for sex ('Marinade the nether rod in the squish mitten'), and the accompanying video sees Bam speeding down the highway in a banana-shaped car, enthusiastically delivering a banana to a man in Speedos.

Featuring: The whole cast, minus Ehren McGhehey and Chris Pontius

Shot in Sydney – both at a Wolfmother show and a big-ass party – it’s more drunken good times. Preston Lacy loses half his barnet to hair removal cream, Wee Man hides in a sofa and gropes people, and Steve-O eats a bunch of hair and doesn’t look well. The making of Jackass Number Two was famously fraught, with a lot of people overdoing it, and you can see how psychologically shattered everyone is – in addition to a few unexplained absences, a backstage explosion in a cooler reduces Dave England to near-crying.

A full-on country tune about maintaining your rural roots after fame, Hollywood Hillbilly seems to have been written specifically about Johnny Knoxville (who both directs and stars in the video) – he’s definitely referred to his daughter Madison as 'Chicken-Butt' elsewhere. Also, it’s nice to see that even when in full-on Dad mode, Johnny drives around with a cattle prod in his car.

The closing theme to Jackass 3D is both a massive banger and oddly heartfelt for a song where he first word is 'pissing'. Sun-bleached, poignant and nostalgia-packed, it’s an emotional watch, a paean to friendship and silliness, at once wistful and chaotic. Shot in a pool used in The Search For Animal Chin, it’s all gleeful hugs and arms thrown around shoulders. And right in the middle is the late Ryan Dunn, gloriously bearded and sadly missed. It’s a hard one to watch without wanting to crack a beer with one hand, grab a skateboard in the other and run outside to have some adventures with your friends.

It’s safe to say that Machine Gun Kelly is a fan of Wildboyz. The undervalued follow-up series to Jackass saw Steve-O and Chris Pontius travelling the world and getting into animal-heavy escapades that should have been the stuff of nightmares but they were totally unfazed by. Sharks. Lots of sharks. When MGK, guesting on Inhale by Juicy J, compares himself to his favourite Jackass star, then, he goes for 'Call me Steve-O / I’m a wild boy'. Steve-O himself makes an appearance in the video, looking slightly the worse for wear but delighted to be there. MGK reused the chorus in his own track Wild Boy, recruiting Steve-O again for the remix’s video – this time, Steve-O shaves his pubes and rolls them into a joint, which MGK’s drummer Rook smokes. All deeply grown-up stuff. Machine Gun Kelly went on to play Steve-O’s childhood hero Tommy Lee in the Mötley Crüe biopic The Dirt, directed by Jackass co-creator Jeff Tremaine. It all joins up, yo.

Steel Panther’s extremely NSFW video features Steve-O among the many cameos, playing himself as a very intense hedge-trimmer invited to the band’s apocalypse-averting party. The rest of the clip involves (among other things) huge amounts of drug use, which might be why there’s never a payoff to Steve-O’s appearance – you think he’s going to pop up again later on but doesn’t. He’s extremely committed to his sobriety, and might sensibly have wished to avoid farting about with large amounts of fake cocaine if there was even the slightest chance of putting that at risk. Good on him – keep it up, Steve-O!

Fuckface Unstoppable was a musical project fronted by Bam Margera that coincided with, well, the guy not treating himself particularly well. Live performances involved downing bottles of whisky, shooting his drummer with a Taser and general chaos – the band as a whole was arguably a vehicle for Bam, at his drunkest, to travel the world being kind of obnoxious (another song: That’s Why I Fucked Your Mom). The official versions of most of FFU’s videos were later deleted from his channels, hopefully a sign of leaving that phase behind. His next project, Evesdroppers, is a more sombre affair, maudlin but forward-looking, and ideally something he can focus on in the new, sober phase of his life.

The Jackass crew shot a rap video with Shaquille O’Neal that never ended up being released. In his autobiography, Professional Idiot, Steve-O writes: “Shaq was a fan of the show and wanted us in his new rap video, so we showed up and spent the day goofing around with him. To his credit, he was game for our antics. Well, sort of: I broke a candy-glass bottle filled with fake piss on his head, he wrestled with everyone and spent quite a lot of the day dry-humping Wee Man.”

Wee Man shows up in a crap Jamiroquai video for about three-quarters of a second. Much better is his appearance in Latin hip-hop group Delinquent Habits’ debut video – he gets to do a bit of skating, and the tune is a total banger.